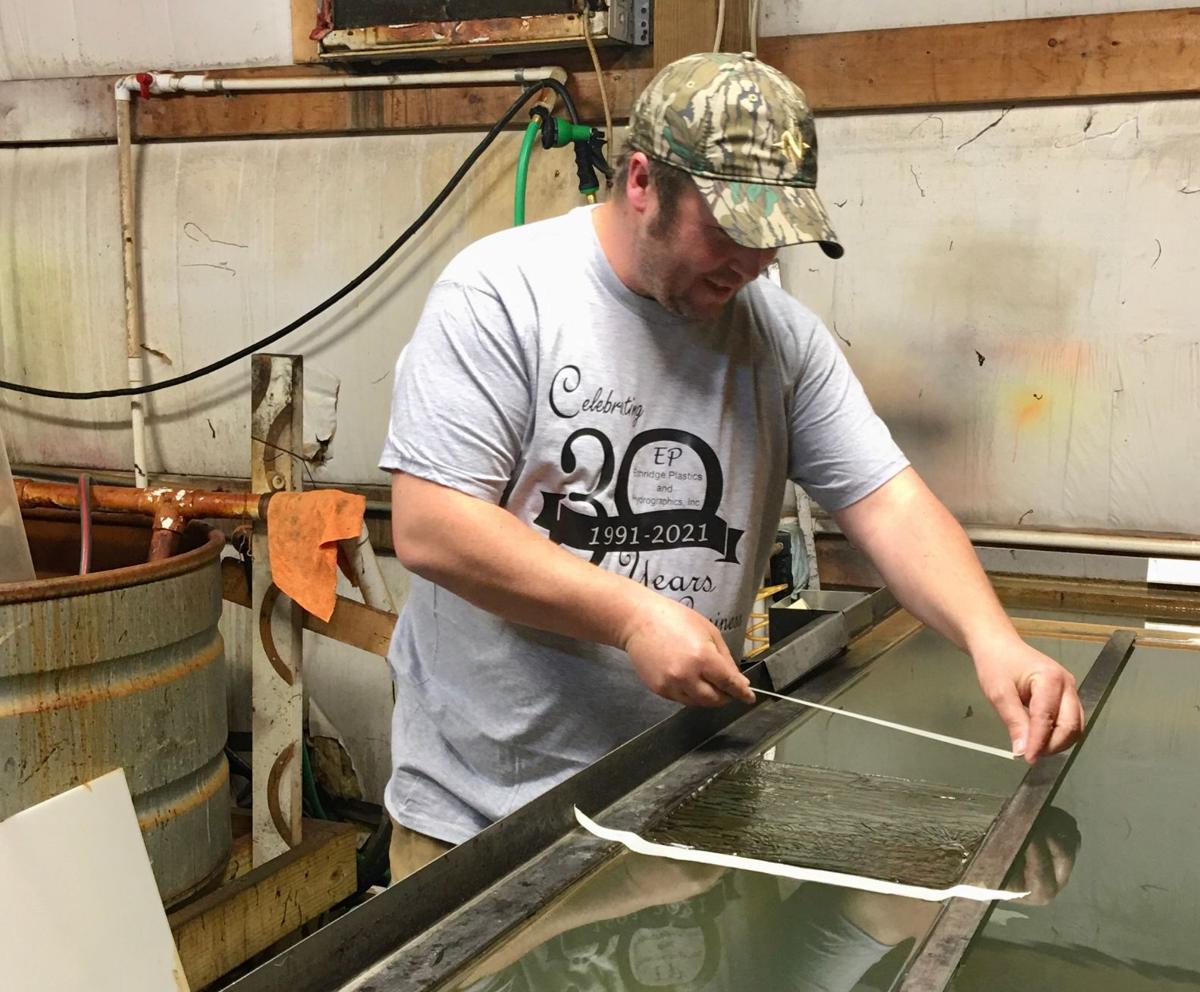 Jerry Ethridge dips the film in water, using a hydrographic process that allows him to place the film on the gun. 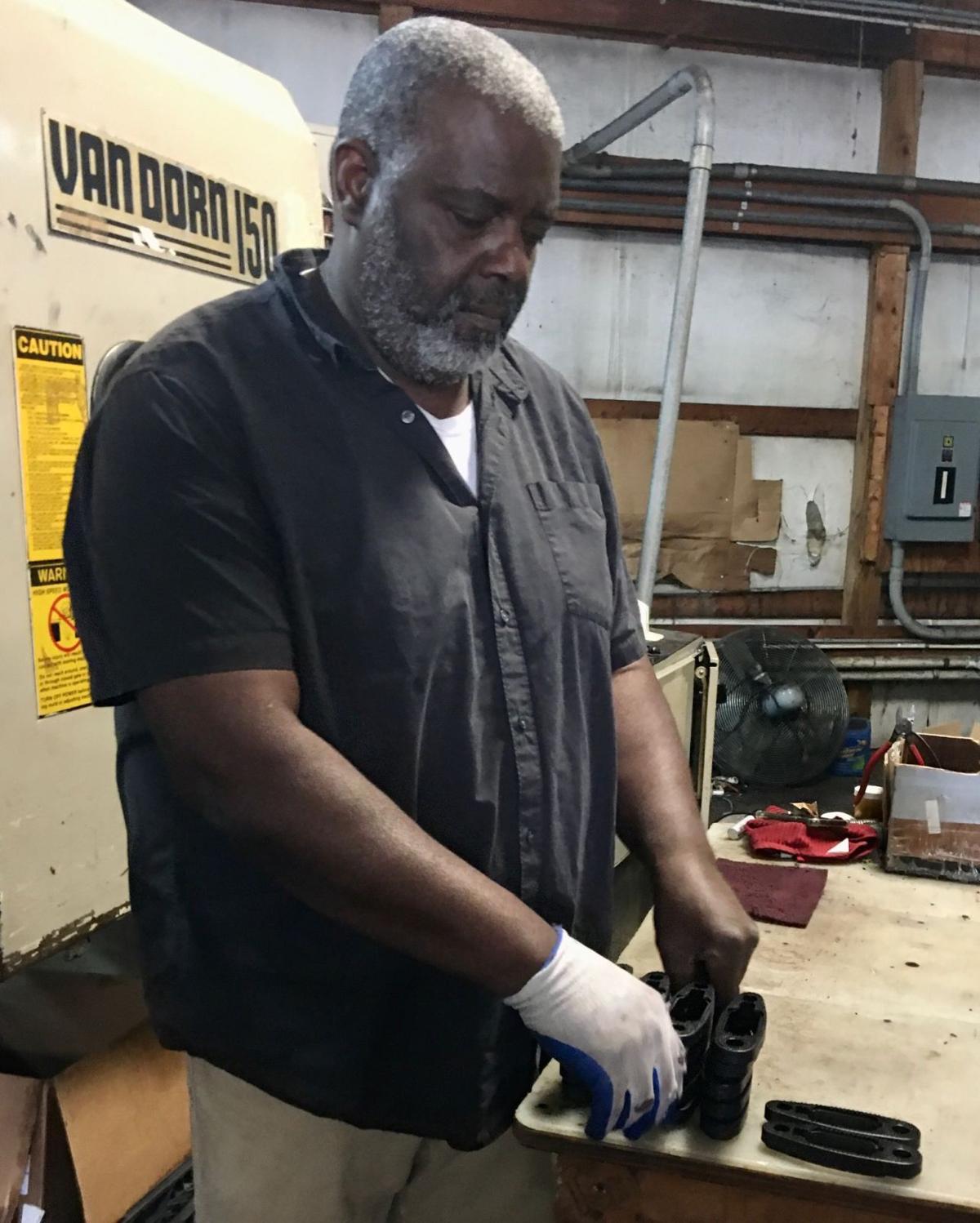 Longtime Ethridge employee James Radford, who celebrates his 21st year with the company in May, straightens some butt plates that will go on rifles. 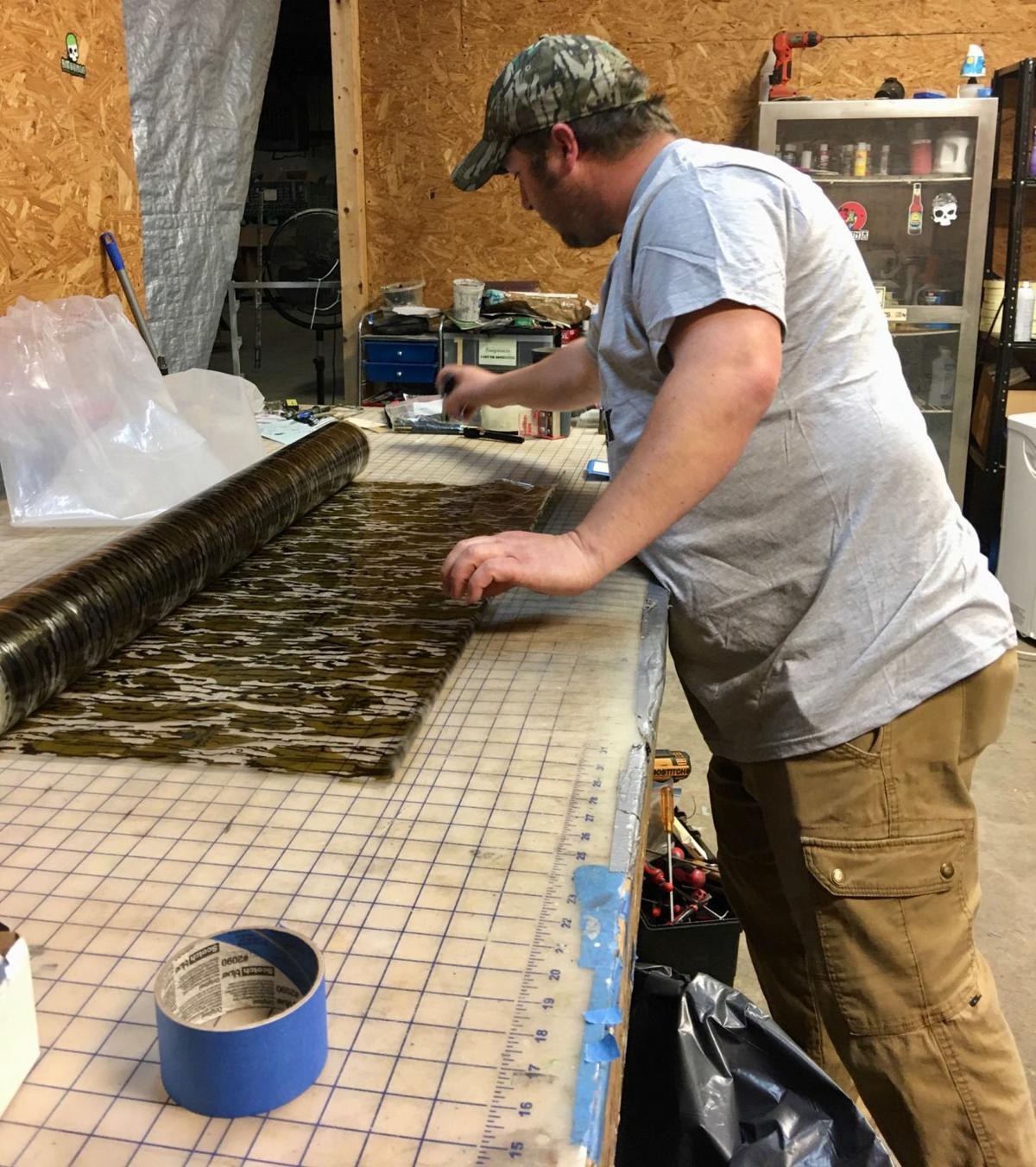 Ethridge Plastics co-owner Jerry Ethridge measures a piece of camouflage film that he will place on a gun. 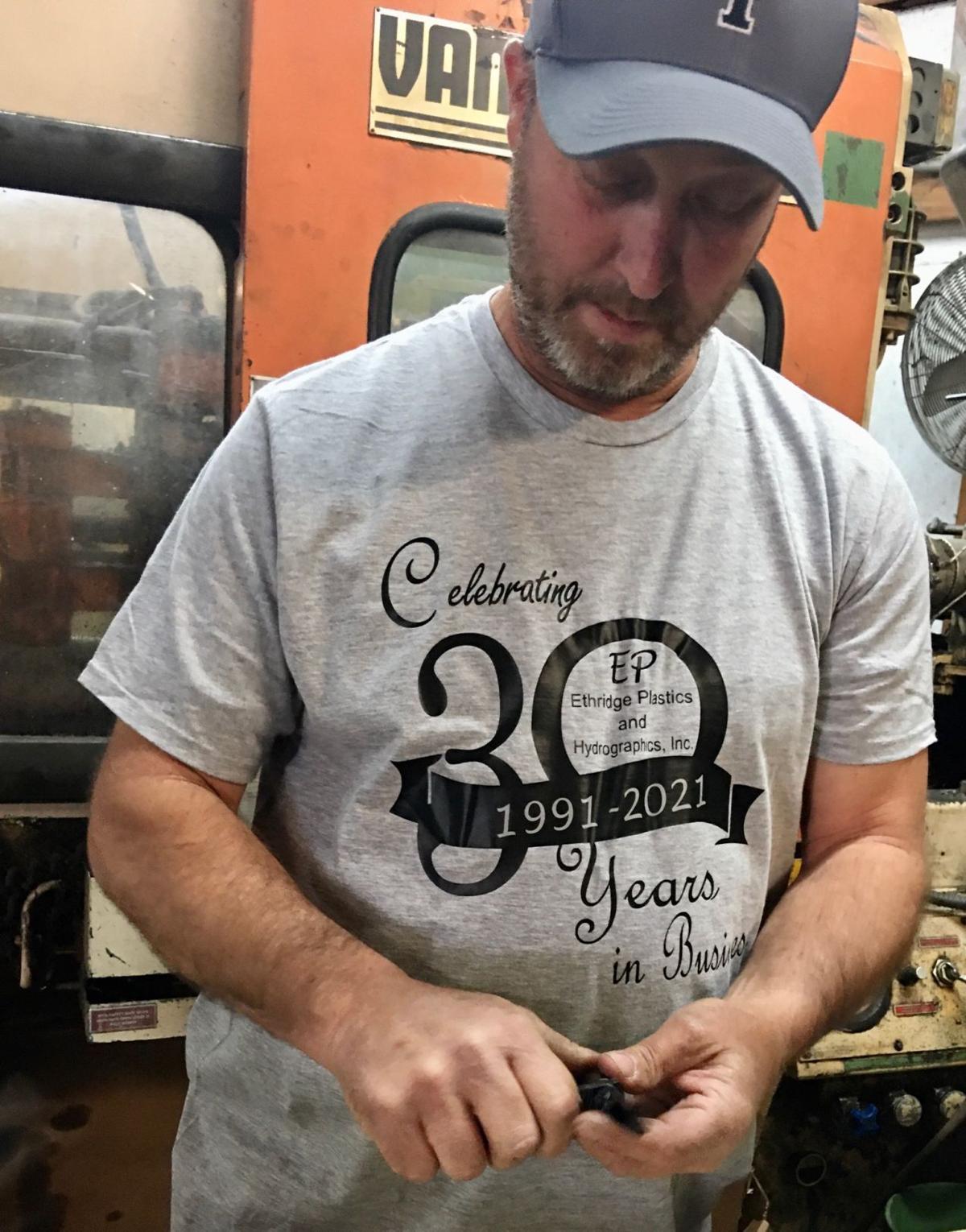 Ethridge Plastics co-owner Edward Ethridge works on one of the company’s game calls.

Jerry Ethridge dips the film in water, using a hydrographic process that allows him to place the film on the gun.

Longtime Ethridge employee James Radford, who celebrates his 21st year with the company in May, straightens some butt plates that will go on rifles.

Ethridge Plastics co-owner Jerry Ethridge measures a piece of camouflage film that he will place on a gun.

Ethridge Plastics co-owner Edward Ethridge works on one of the company’s game calls.

Not many people get to celebrate 30 years in business, said Jerry Ethridge of the milestone he and his family recognized on Friday with a ribbon-cutting and open house at the family business, Ethridge Plastics and Hydrographics Inc., located on Industrial Drive in Cadiz.

“For a family-owned business, that’s saying a lot,” Ethridge said of the business he co-owns today with brother Edward Ethridge.

The two men gathered with other family members, local officials and other supporters to mark the industry’s three decades.

Cadiz Mayor Todd King told those attending the open house that he was proud of the company and its long history in the community.

He thanked younger members of the family for carrying on the legacy of the brothers’ late parents, J.T. and Erma Jean Ethridge.

J.T. opened the plastics company in 1991 in the old Boyd Auto Parts location on Line Street, moving a year later to Industrial Drive.

Trigg County Judge-Executive Hollis Alexander also congratulated the Ethridges, describing the plastics company as a multi-family business and noting that everyone in the family has been involved in the company.

Beth Sumner, membership director of the Trigg County Chamber of Commerce, said it was good to be a part of the milestone.

“I love to celebrate our hometown boys,” she noted. “It’s nice to see their successes.”

For the occasion, members of the Ethridge family dressed in matching T-shirts proclaiming their three decades in business.

Later, in one of the rooms at the plant, Jerry Ethridge demonstrated the work of the company, measuring a piece of film and dipping it in water — the latter a hydrographic dipping process that allowed him, in this instance, to apply the camouflage film to a gun that is to be used by the military.

Edward Ethridge showed a visitor some of the game calls the company works on.

Ethridge Plastics does injection molding, including parts for the government, small parts for Trane Air Conditioning in Clarksville and game calls for two other businesses, Bone Collector and Woodhaven Custom Calls.

In addition to utilizing the hydrographic dipping process, Jerry Ethridge said the company does “a few other odd and end jobs.”

The business got its start in April 1991 when Harold Knight and David Hale of Knight and Hale Game Calls spoke to J.T. Ethridge, encouraging him to open his own business.

J.T. Ethridge built the business around the production of plastic parts for hunting game calls, the release explained, with sons Edward and Jerry expanding its line of products to include automotive parts and other custom items when they joined the company.

Ethridge Plastics at one time had 33 employees, and all of J.T. and Erma Jean’s children have worked at the plant along with a few of the grandchildren, according to Jerry.

The company worked in the past with Ebonite International bowling ball manufacturer in Hopkinsville and now does work for Brunswick Bowling Products, the Muskegon, Michigan-based bowling business that purchased Ebonite a year ago.

Edward Ethridge said he hopes the family business will be around for another 10, 15 or 20 years, and as brother Jerry Ethridge considered the company’s future, he noted that Ethridge Plastics has a bunch of jobs on the horizon.

“(With) what we’re looking at now, we’re going to be busy,” Jerry Ethridge observed of the success of the business in coming years.

Friday’s event included comments from local dignitaries and family along with tours of the facility. It was hosted by the Trigg County chamber together with the Cadiz-Trigg County Economic Development Commission.