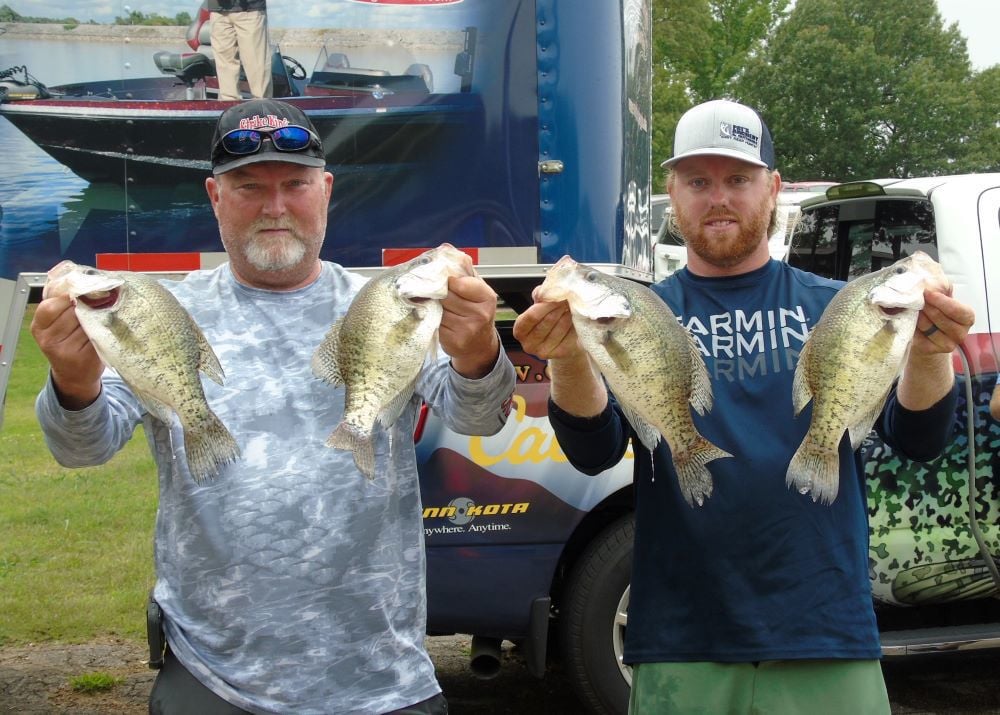 The top spot in the 2020 Mega Bucks competition went to Josh Jones from Sapulpa, Oklahoma, and Tim Blackley from Hornbeak, Tennessee. 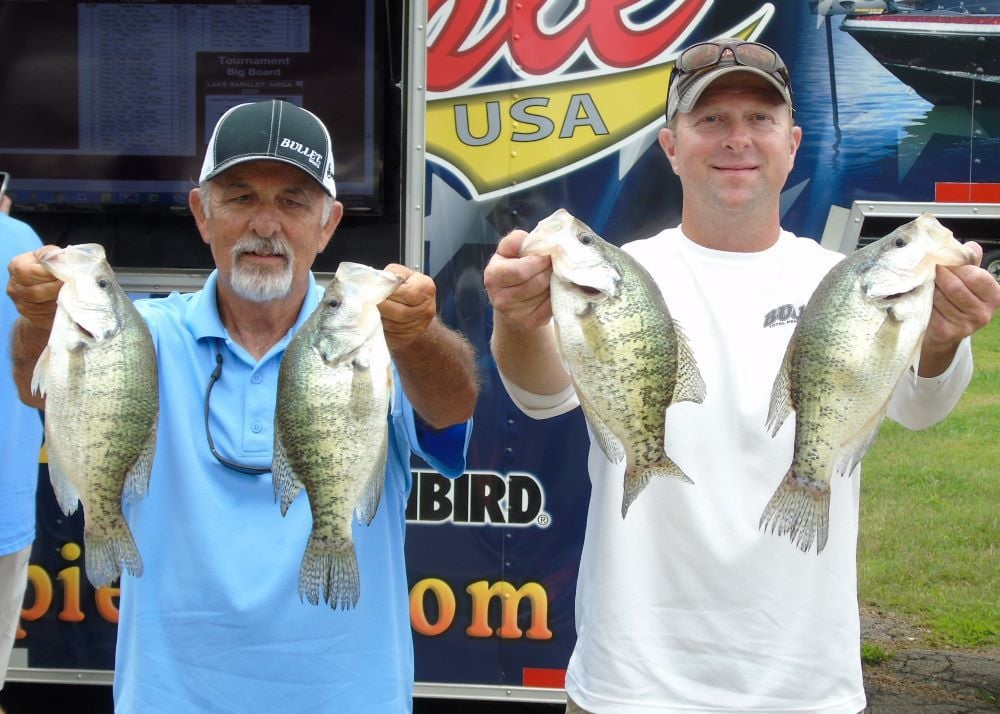 The runner-up spot went to Lee Anderson and Rick Johnston from Benton.

The top spot in the 2020 Mega Bucks competition went to Josh Jones from Sapulpa, Oklahoma, and Tim Blackley from Hornbeak, Tennessee.

The runner-up spot went to Lee Anderson and Rick Johnston from Benton.

The CUSA Mega Bucks tournament launched day one with 114 anglers, all fishing in the same division. The anglers were competing for their share of the $25,000 purse and an opportunity to qualify for the Bass Pro Shops/Cabela’s Crappie USA $125,000.00 Classic this fall on Green River Lake, Columbia.

John Hicks and Tim Harris led the pack with 10.83 pounds Friday but were followed closely by Lee Anderson and Rick Johnson with 10.63 pounds. Day one Big Fish went to Jeff Outland and Michael McGregor with a 1.85 pounder.

A total of 54 boats fished the event, all in the same division. A total of $27,250 was distributed to the winners.

Josh Jones from Sapulpa, Oklahoma and Tim Blackley from Hornbeak, Tennessee took first place. They were sitting in fifth place after day one with 10.34 pounds, less than a pound out of first. Day two produced 10.16 pounds and a two-day total of 20.5 pounds. They earned a check for $10,000.

Jones and Blackley fished mid-Barkley Lake in 7 to 14 feet of water using their electronics to find fish randomly feeding along flats. They said the fish were not holding in cover but chasing small bait like willow flies.

“We were catching suspended fish not on structure,” Jones said. “The mayfly hatch had them biting a hair jig really well. We were catching anywhere from 40-70 keepers a day. We did not catch a fish under 1.5 pounds from below 12 feet. If we found a fish deeper than 12 feet it was a good one.”

They reported one poling with a 1/64 bucktail hair jig tied below a 1/4-ounce weight. The combination helped them catch more than 100 fish for the weekend.

The runner-up spot went to Lee Anderson and Rick Johnston. The Benton, Kentucky, anglers were holding down second place after day one. They weighed a two-day total of 20.43 pounds to keep their position on the final day. Their efforts earned them a check for $4,000.

Anderson and Johnston fished Barkley Lake north of 68 Highway in 10-22 feet of water. They used one pole to vertical jig with hair jigs and Jenko Jigs to catch more than 60 fish for the weekend.

Tony Sheppard from Dexter, Kentucky and Mike Sheppard from Kirksey, Kentucky, were sitting in fourth place after day one. Their two-day total of 20.08 pounds moved them up to third and earned them a check for $2,100.

“We were casting to manmade structure,” Sheppard said. “We were using my new Trick Stick light and Daiwa Ballistic reels. Money Milk in the Jenko Fry Baby was our bait of choice. We rigged the Fry Baby on a black 1/16 ounce Slasher jig head.”

Team Sheppard fished an area of Barkley around U.S. 68 in about 12 feet of water. They caught around 60 fish for the weekend.

Other winnersBig Fish honors went to Jeff Outland and Michael McGregor of Benton. They posted their 1.85-pound crappie on day one. The big slab held up through the day two competition to retain the top spot.

“We had a fantastic event, even with heavy rains and strong winds on Saturday,” said Darrell Van Vactor, CUSA operations manager. “There were teams from 11 states fishing the event and the catch really surprised many local anglers. There were some really good weights for late June on Kentucky Lake.”

The CUSA Classic Championship will be held Oct. 22-24 at Green River Lake, Columbia. The 2020 Classic features a guaranteed payout of $125,000 in cash and prizes.

For more information, visit the website at www.crappieusa.com and Crappie USA Tournament Trail Facebook Page. The CUSA office is available at 502-384-5924.