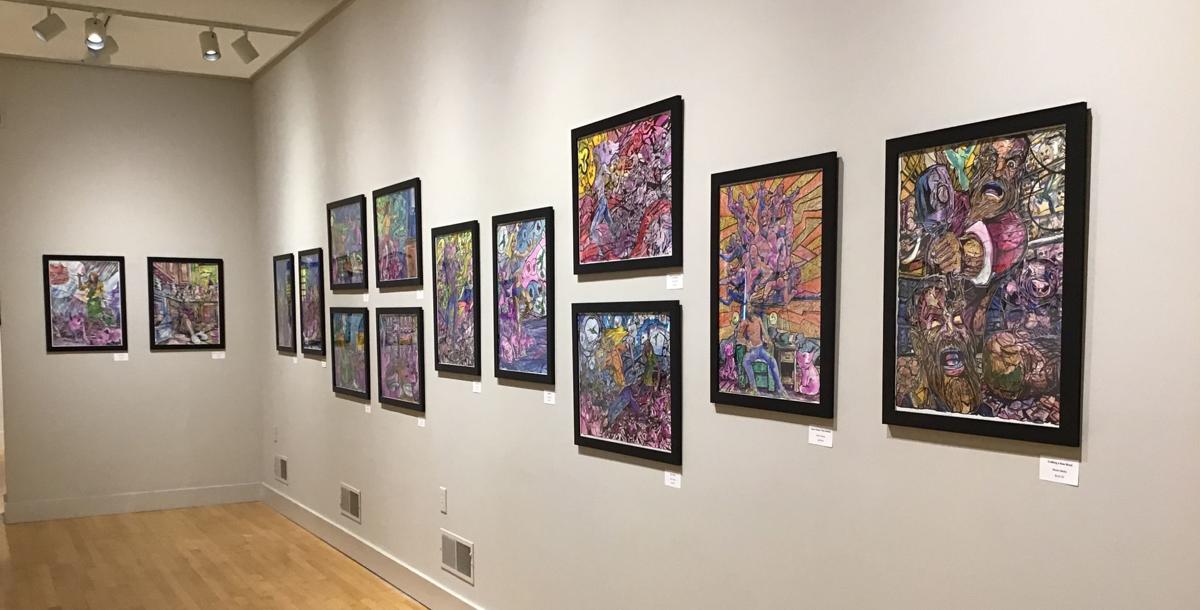 Art pieces created by Jason Sturgill are on display at the Janice Mason Art Museum in Cadiz. The exhibit continues through Oct. 3, and visitors may drop by the museum to see his work firsthand during museum hours from 10 a.m. to 4 p.m. Tuesday through Saturday and from 1 to 4 p.m. on Sundays. Face masks and social distancing are recommended. 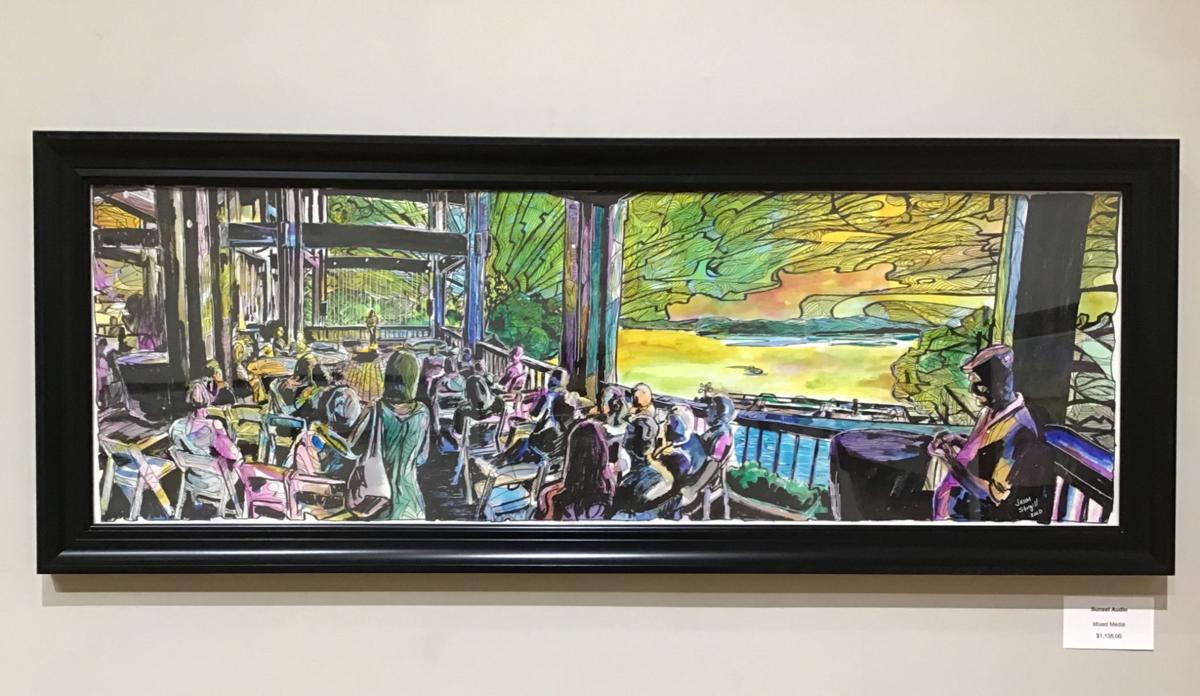 This piece called “Sunset Audio” by Sturgill depicts the upper balcony at the Lake Barkley State Resort Park during the artist’s visit to the area last fall. 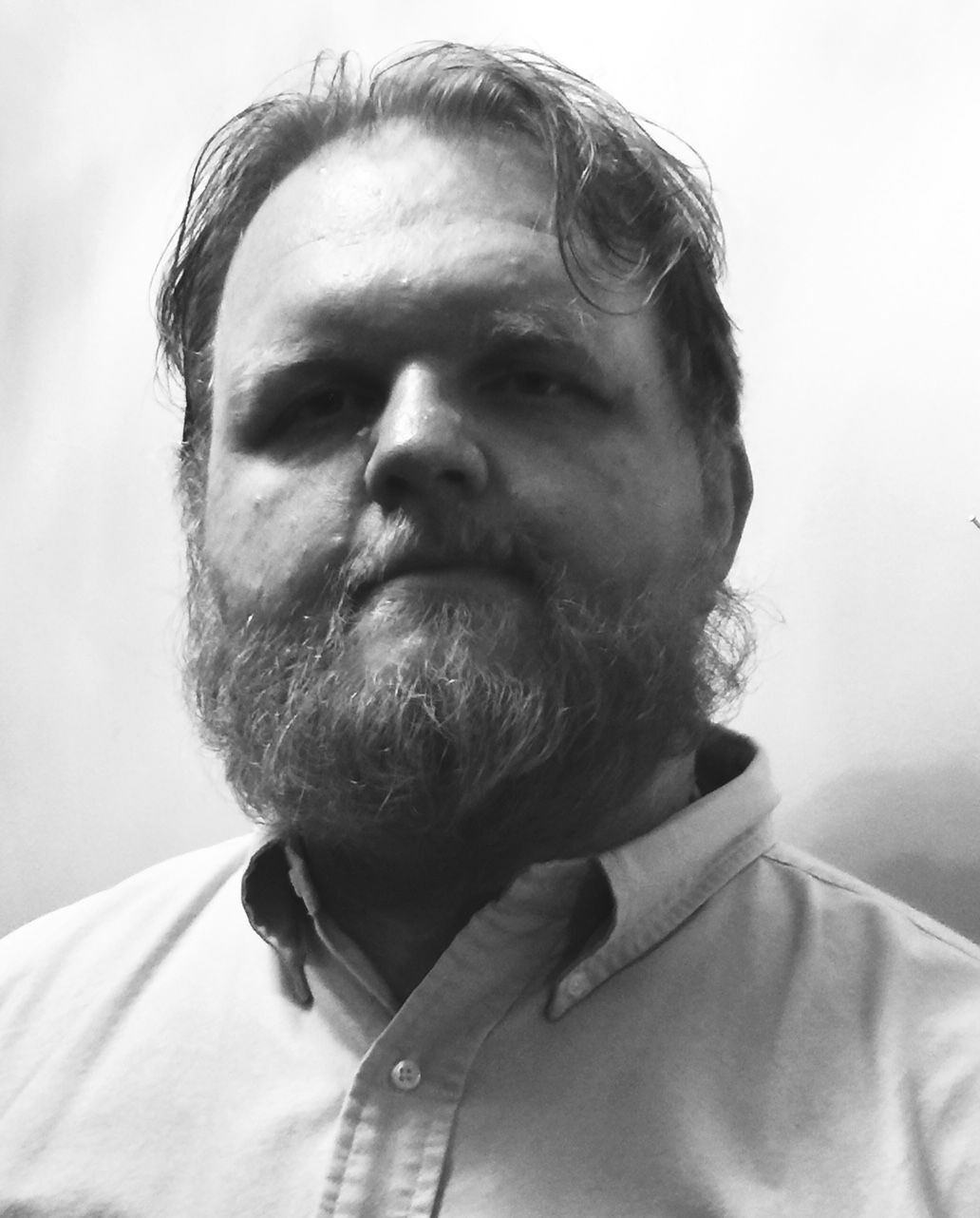 Art pieces created by Jason Sturgill are on display at the Janice Mason Art Museum in Cadiz. The exhibit continues through Oct. 3, and visitors may drop by the museum to see his work firsthand during museum hours from 10 a.m. to 4 p.m. Tuesday through Saturday and from 1 to 4 p.m. on Sundays. Face masks and social distancing are recommended.

This piece called “Sunset Audio” by Sturgill depicts the upper balcony at the Lake Barkley State Resort Park during the artist’s visit to the area last fall.

Six seconds is the typical length of time people spend looking at a piece of art work in a museum, but Jason Sturgill suggests they spend longer looking at his works of art, now on display at the Janice Mason Art Museum in downtown Cadiz.

“What I want them to get out of it is (that) the pieces will grow with them over time,” Lexington resident Sturgill said of the impact he’d like his work to have.

“As they go back and look at it, they will pick up something new, and the piece changes over time with them,” he shared during an interview early last week.

Describing his artistic endeavors as wild and kinetic, he notes that people seeing his pieces will look at them differently every time they see one of his works of art.

His current exhibit, which opened on July 21, includes 15 panoramic drawings from a visit the artist made to the community last fall and 50 other pieces featuring his own self-reflection and his perspective of the COVID-19 pandemic.

The exhibit, “Xenosketch: the Art of Jason Sturgill,” will continue through Oct. 3, and a public reception with the artist is slated for 1 to 4 p.m. Sept. 26.

Museum Executive Director Joan Demers notes that Sturgill’s display is the first official exhibit hosted at the downtown museum since the shutdown.

The museum closed on March 14 because of restrictions related to the pandemic and opened to the public once again on June 6, Demers said.

Demers noted that Sturgill’s style is unique, using watercolors and pen and ink media to create what she described as very colorful and bold pieces.

She invites the public to “come and check it out.”

All but two of his pieces are for sale, those two having personal significance for Sturgill, and among the lot are three panoramas of Lake Barkley Lodge, two of Cadiz Baptist Church and his work featuring the new bridge and surrounding area.

Sturgill visited the community last fall and took pictures at Lake Barkley and in Cadiz during that visit; he initially received an invitation from museum board members Vicki Karrigan, Christina Parker and Jean Martin, who met him during the Kentucky Crafted Market last March at the Kentucky Horse Park in Lexington.

“I was asked to come down to Cadiz from Lexington,” recalls Sturgill of the invitation to “come down for a couple of days and hang out on the lake.

“I am always attracted to bodies of water,” he said, describing how he loved Lake Barkley and the opportunity to ride some boats and see the new bridge.

Sturgill was also impressed with the architecture he saw in the area, and he shares that as a schoolteacher he is always looking for good architecture and enjoys capturing small towns and the history and legacy of those small towns.

He said he has been in conversation with the Kentucky Heritage Council about its Kentucky Main Street Program and the possibility that he might work with that effort that encourages downtown revitalization in Kentucky communities.

But nothing of those talks has been made official, Sturgill notes.

He has done some work in Cincinnati, Ohio near the Kentucky border as well as in Lexington, Louisville, Morehead and at Cave Run Lake in eastern Kentucky.

Sturgill has been doing his panoramic work, creating sweeping views of the subject matter that he chooses to bring to life, for the past two to 2 ½ years.

But digital cameras started coming out his first year in graduate school and he began working on a panoramic piece, snapping individual photos and piecing them together into his sweeping vistas.

A lot of people love them, Sturgill notes, and they’ve all sold really well.

“They used to live there, or they know somebody who lives there.”

Sturgill is a mixed media artist, combining watercolors with pen and ink and sometimes using markers, colored pencils and white ink in creating his work.

His artistic pieces begin with graphite, which he then erases before starting with the watercolors; the watercolors are subsequently layered with pen and ink.

“Most of them are still scenes,” Sturgill says, describing his creations.

Sturgill’s exhibit is one of anywhere from eight to 12 featured at the museum each year, and Demers notes that people seem to enjoy his work.

“It seems popular,” she said. “People like it. It’s very colorful.”