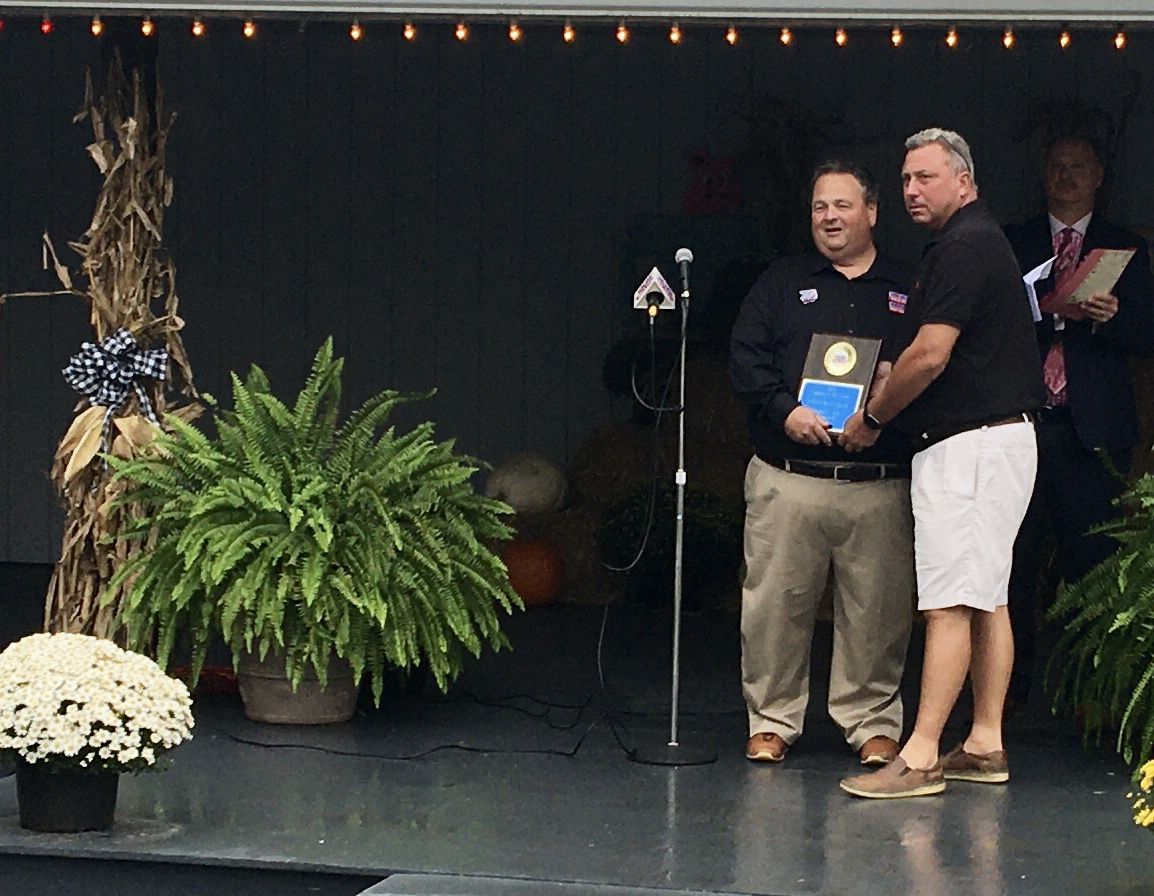 Farm broadcaster Alan Watts of WKDZ presents Steven Hargis (right) with the Farmer of the Year Award during the festival’s awards ceremony. 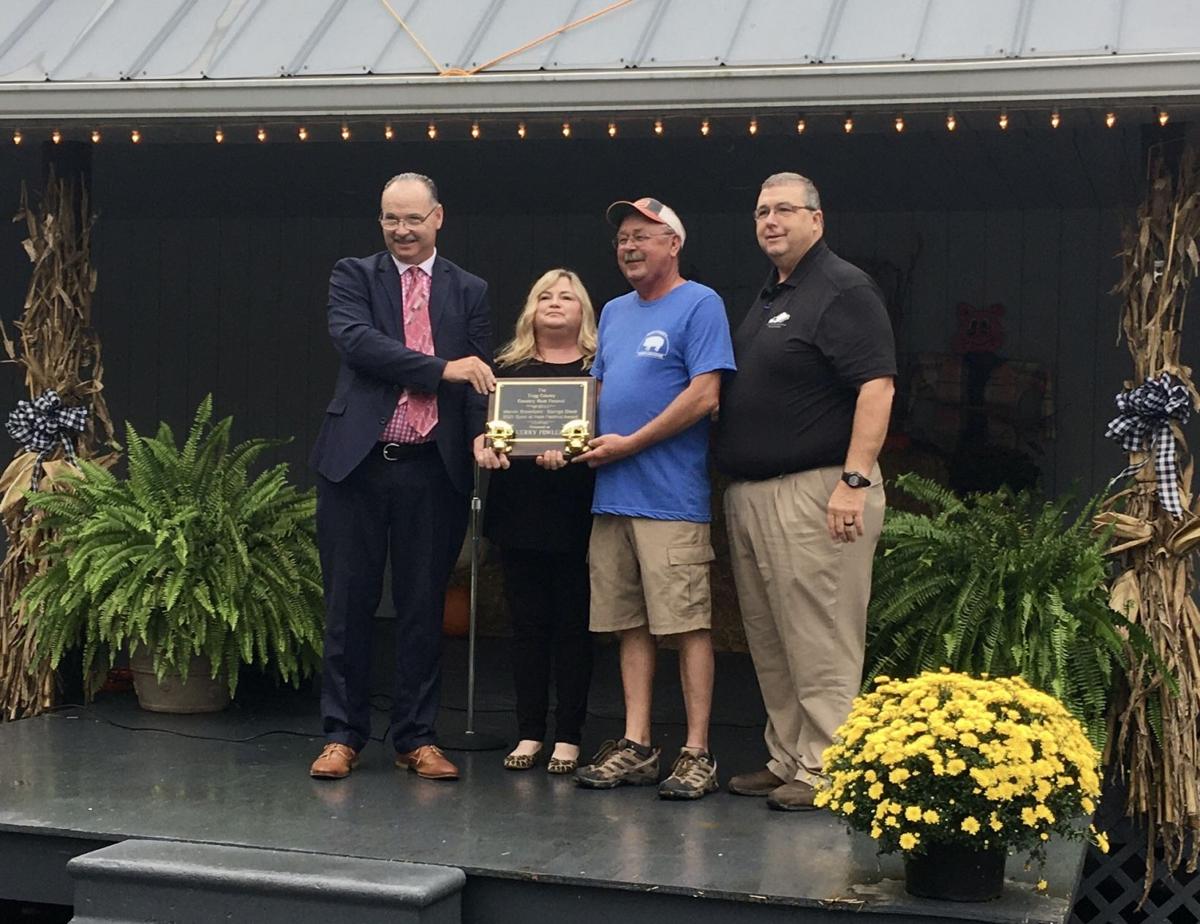 Farm broadcaster Alan Watts of WKDZ presents Steven Hargis (right) with the Farmer of the Year Award during the festival’s awards ceremony.

Thursday morning saw the community kick off the 45th Annual Trigg County Country Ham Festival with an awards presentation at the Renaissance Stage in downtown Cadiz, two long years since its last festival.

A small crowd of supporters assembled to listen as Cadiz Mayor Todd King revealed the honorees.

His voice broke as he shared the attributes of Casey Parrent, the recipient of the festival’s inaugural Spirit of Cadiz Award and again, as he announced the name of Kerry Fowler, the city’s retired public works director who received the Marvin Broadbent Jr./George Bleidt Spirit of the Ham Festival Award.

“I feel that these two individuals are some of the greatest assets to our city,” the mayor observed of Parrent and Fowler as he talked from the Renaissance Stage. “They both have enormous pride for our community and have gone above and beyond in numerous ways.”

Farm broadcaster Alan Watts of WKDZ Radio introduced the Farmer of the Year, Steven Hargis, a Trigg County farmer that Watts said raises row crops on his property in Trigg and Christian counties.

Watts noted that Hargis is also an active volunteer, among other things frequently mowing the yard at his church and helping with its Bible school program. He further noted that Hargis and his wife, Annette Hargis, have a daughter and son-in-law, Betsy and Jason Shemwell, and two grandchildren.

The mayor noted that Parrent, who recently left her job as director of the city’s Renaissance on Main program, has worked tirelessly to bring light to the downtown and has brought lots of smiles to the community, doing everything from ice skating with youngsters dressed as the Grinch to writing replies to their Santa letters and hopping around in the Easter Bunny costume during that holiday.

King said no job was too large or too small for Parrent.

“(Her) handiwork can be admired in the decorations downtown and on the Renaissance Stage,” the mayor noted. “You can see the pride in every little detail.

“Even with COVID,” King continued, “(she) still made it possible to enjoy Farmer’s Market and Halloween Safe Night by creating a drive-thru for those events.”

The mayor said Fowler has never missed a ham festival and has volunteered countless hours in many different capacities through the years. He said Fowler, who announced his retirement earlier this year, has served on the ham festival committee for years and was chairman of the committee for two consecutive years.

“Those same two years (Fowler) won the Grand Champion ham,” King said. “(He) was instrumental in starting the fireworks show, has provided sound for the entertainment and recruited entertainment. During this year’s service, (he) was even in the group that started this very award.”

The mayor said officials could not think of anyone more deserving of the award than Fowler, and he noted that Fowler has played a major role in the success of the festival through the years.

“We appreciate his hard work and dedication,” King said of Fowler.

The mayor explained that the Spirit of Cadiz Award will be given each year to a person who has a true love for the city, has made strides in helping the city flourish and has a deep sense of community. The Broadbent/Bleidt Award is given to someone who embodies the true spirit of the ham festival, King said.

Thursday’s awards presentation was the first event for this year’s revived ham festival, which was on hiatus last year because of the coronavirus outbreak. A breakfast normally hosted by the Trigg County Chamber of Commerce to usher in the festival was canceled this year due to COVID-19.

The chamber did sponsor last week’s awards ceremony at the stage.

King noted that organizers made some changes to the festival so events could be spread out more and would allow for proper social distancing. He said organizers were excited about the festival’s return.

“Thank you for joining us today,” he said during the awards. “I appreciate everybody coming out.”