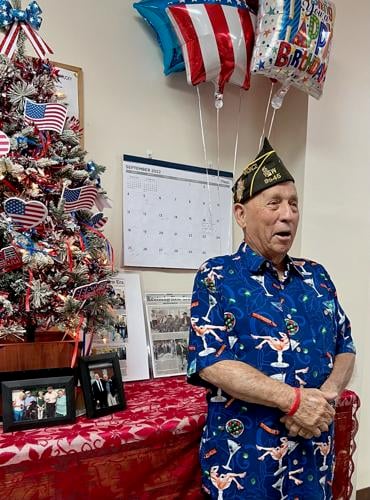 James Ethridge stands in front of a freedom tree made for him by his daughter, Jayme Junker, while celebrating his birthday earlier this month at the Cadiz VFW. 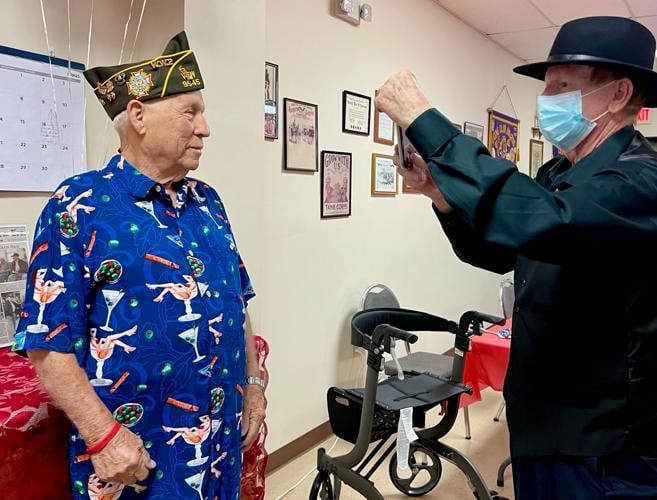 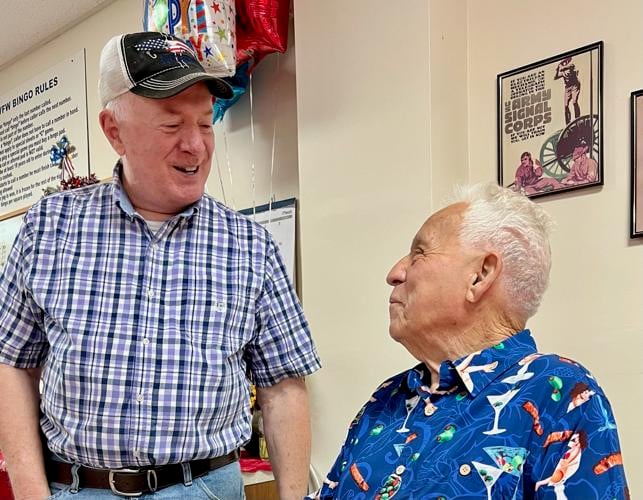 James Ethridge (right) talks with Wayne Miller, who came to the recent celebration to wish Ethridge well on his birthday.

James Ethridge stands in front of a freedom tree made for him by his daughter, Jayme Junker, while celebrating his birthday earlier this month at the Cadiz VFW.

James Ethridge (right) talks with Wayne Miller, who came to the recent celebration to wish Ethridge well on his birthday.

The war was not going too well in the early 1940s, when James “Jim” Ethridge was a self-described “little tag along,” hanging out with young men who were three and four years older than he was.

“They were all going into the service so I had to think up a scheme of how I could get into the service,” said Ethridge, a Cadiz resident and veteran of World War II and Korea who celebrated his birthday with a party on Sept. 9 at the local Veterans of Foreign Wars facility on Lafayette Street.

Ethridge turned 91 on Sept. 10, having actually been born in 1931. But for a long time, the Army recorded a different year of birth for him.

Wanting to join up like his older buddies, a young Ethridge persevered in the mid-1940s and found someone who created a fake birth certificate that added three years to his age.

It listed his age upon enlistment as 18.

In reality, Ethridge was not quite 15 years old.

The Cadiz man went on to serve several years in the military beginning on Aug. 22, 1946, the date of his enlistment in the U.S. Army.

He learned respect and discipline in the Army and, under the tutelage of soldiers that he described as “mostly hardened World War II combat men,” he learned how to be a man.

He was in the Philippines, and he spent a long stretch in Korea, Ethridge recalls of his service.

Through it all, he had to grow up fast.

“I appreciate everything that I learned,” says Ethridge, a native of Cairo, Illinois, of the lessons that he gained as a military service member.

VFW Auxiliary life member Marsha Pater, who recalls Ethridge telling her of his passion for the U.S. Army, notes that her friend is likely the only living World War II military veteran in Cadiz.

A recipient of a Presidential Unit Citation and several other medals, Ethridge gave up his childhood because he wanted to serve his country, said his daughter Jayme Junker.

“It just shows me he really is part of that greatest generation,” said Junker, who organized the recent party along with Pater and Cindy Calhoun. “I’m just very proud of him.”

Junker notes that she and her father took part in an Honor Flight in October 2020, something Ethridge was hesitant to do because he felt there were more people deserving than he was.

“He’s a very humble guy when it comes to his military service,” Jayme Junker observes.

The following month, in November 2020, he and two other veterans traveled to Frankfort to address the military affairs committee.

The three men received a standing ovation while in the state capital, Junker said.

In addition to his flight to Washington, D.C., Ethridge has twice participated in a B25 flight, once at Fort Campbell and again in Paducah.

He served a short stint in the U.S. Navy.

Many years later, Ethridge finally shared his true birthdate with the U.S. Army.

Junker said her father never really talked about his service in the military, but as he recalled those years during his recent party, he shared just how much it meant to him.

“I fought so hard to get in,” said Ethridge, who first tried to join the U.S. Marines because, like all young boys of that era he said, he liked the uniform.

But the Marines wanted to be introduced to his parents, and after noticing an Army sign inscribed with its familiar “We need you” slogan, a young Ethridge instead enlisted in the Army.

He is a lifetime member of the VFW in New Lenox, Illinois, where he lived at one time, and is currently in the process of transferring his membership to the Cadiz VFW organization.

When his paperwork transfers, he will be a member of the local group and his daughter, like Pater and Calhoun, will be in the VFW Auxiliary.

As he sat recently at a table in the VFW hall, Ethridge was greeted by numerous people who came to share their well wishes for his birthday.

“We had a great turnout,” observed Pater, who noted that Ethridge really enjoyed the celebration and is still reading the cards that were given to him on his special occasion.

She said the birthday party included a rendition of the Irish ballad “Danny Boy,” which Ethridge’s mother used to sing to him.

It was sung at the party by Nashville, Tennessee, singer/songwriter Ray Ligon, and Pater said it was “beautifully done.

“He’s a country singer singing an Irish song, and it was just so pretty,” Pater said.

She described the recent party as a celebration of life, and Ethridge devoted several years of his life to his service in the military.

Ethridge also is a lifetime member of the American Legion in Stillwater, Minnesota, and the Army veteran has been named a Kentucky Colonel by Kentucky Gov. Andy Beshear.