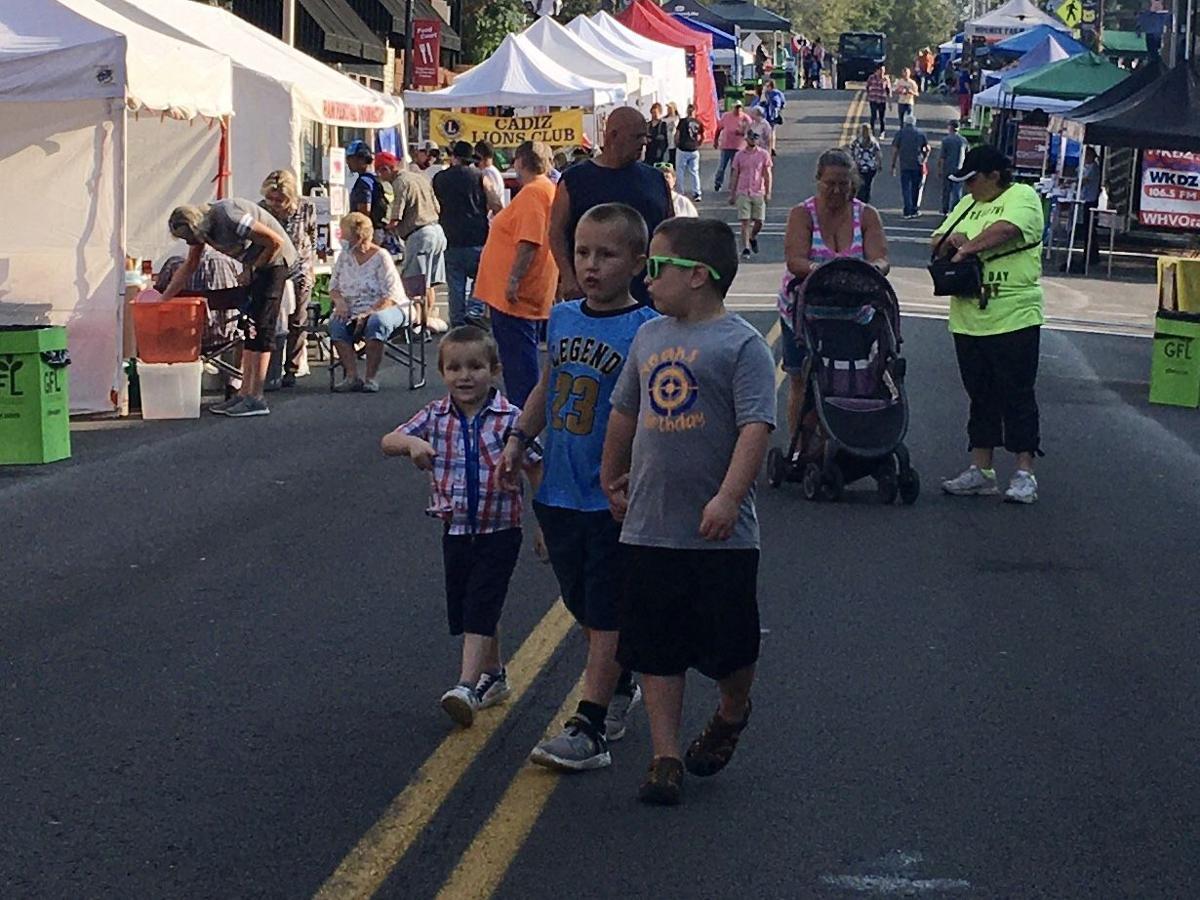 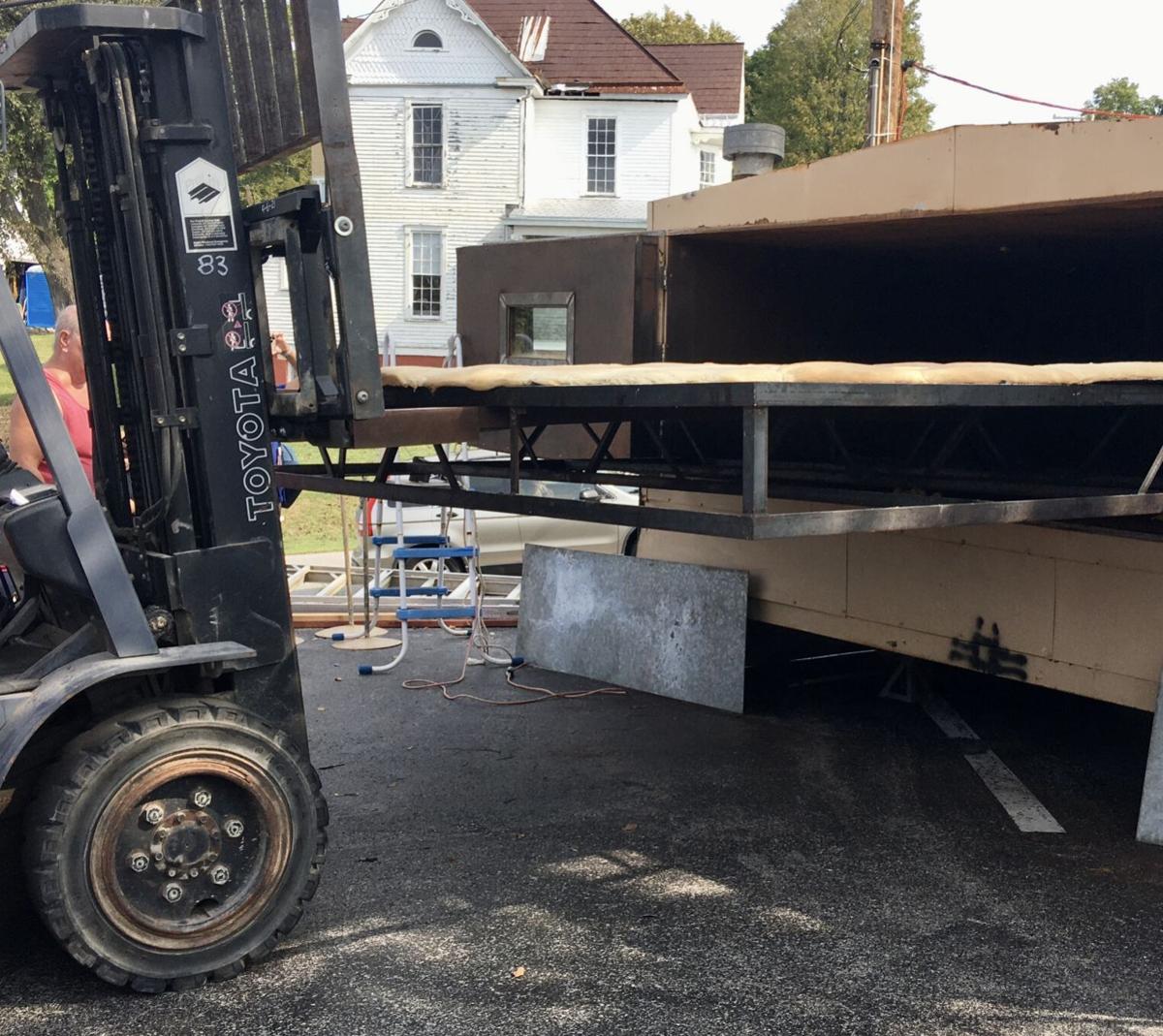 The biscuits come out of the oven at the ham festival this past weekend. 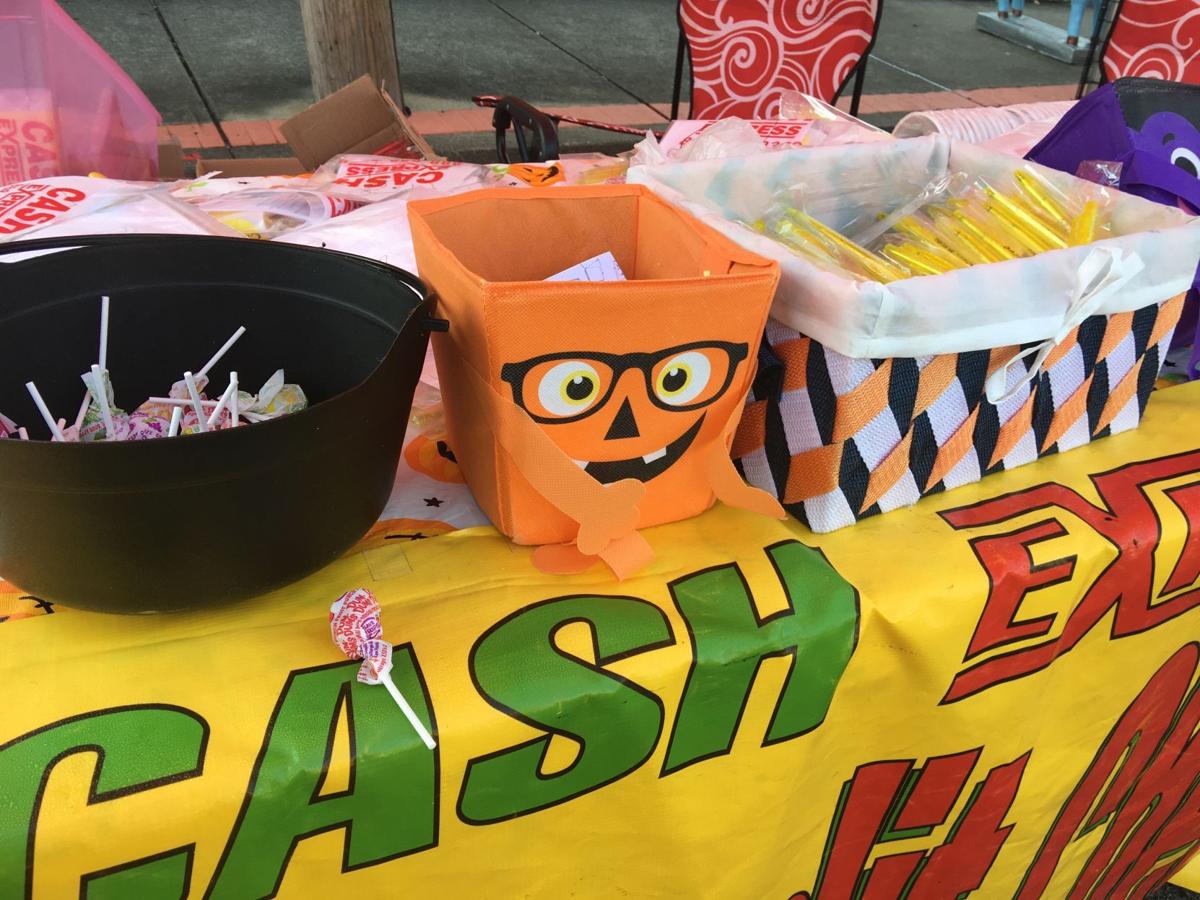 These baskets were on display at one of the vendor booths. 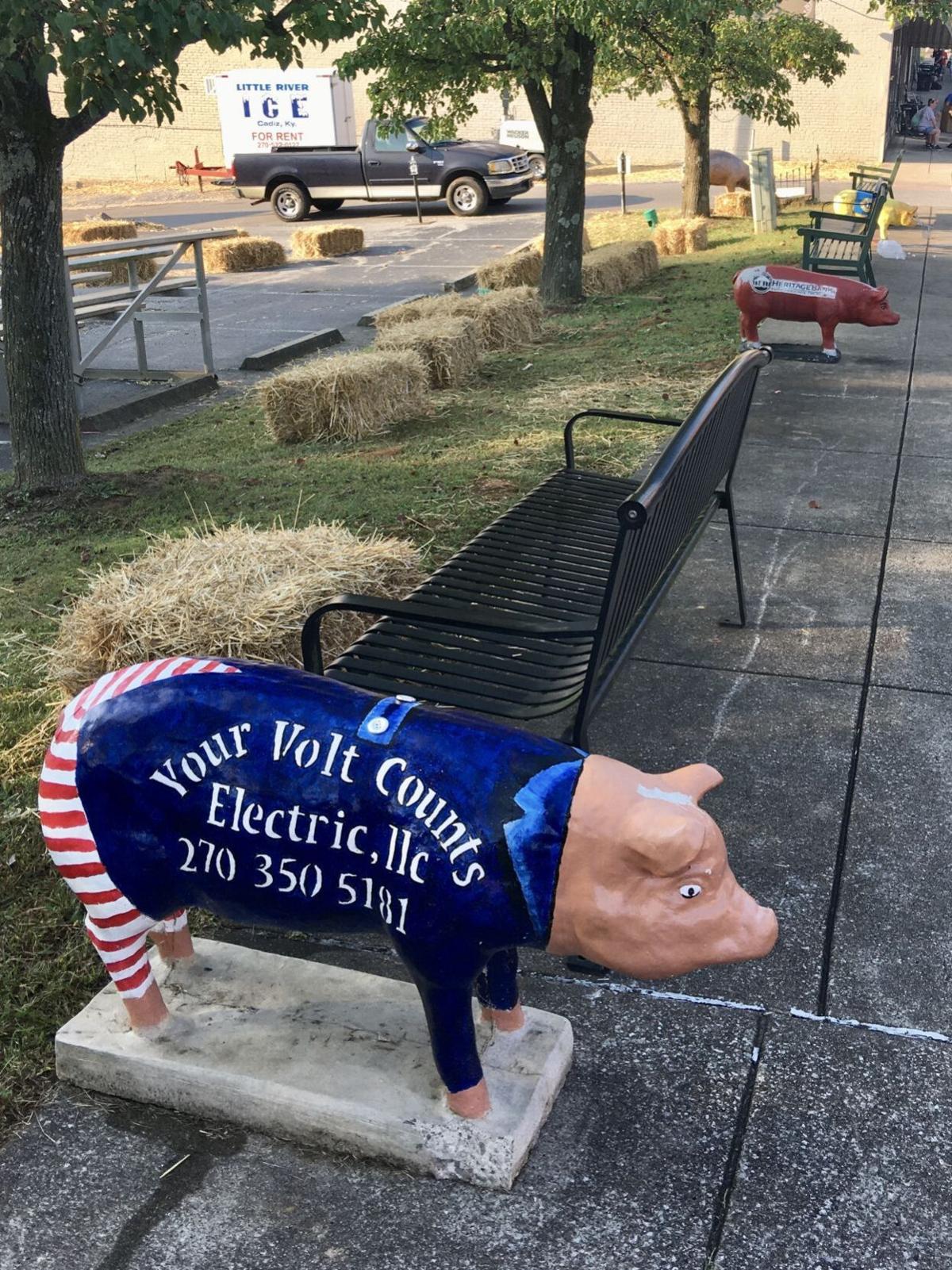 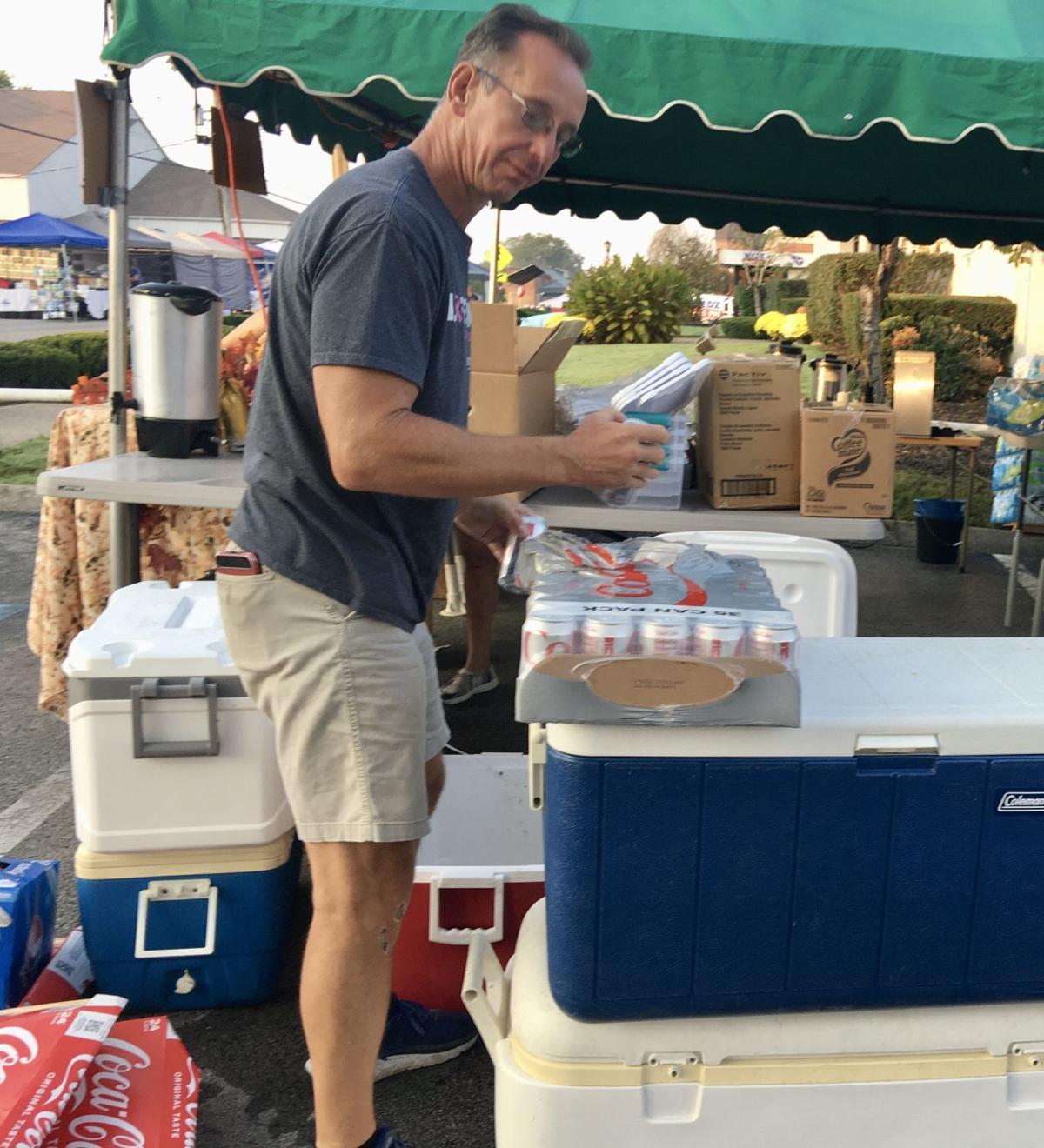 Volunteer Thomas Bragg works at the Helping Hands tent during the festival. 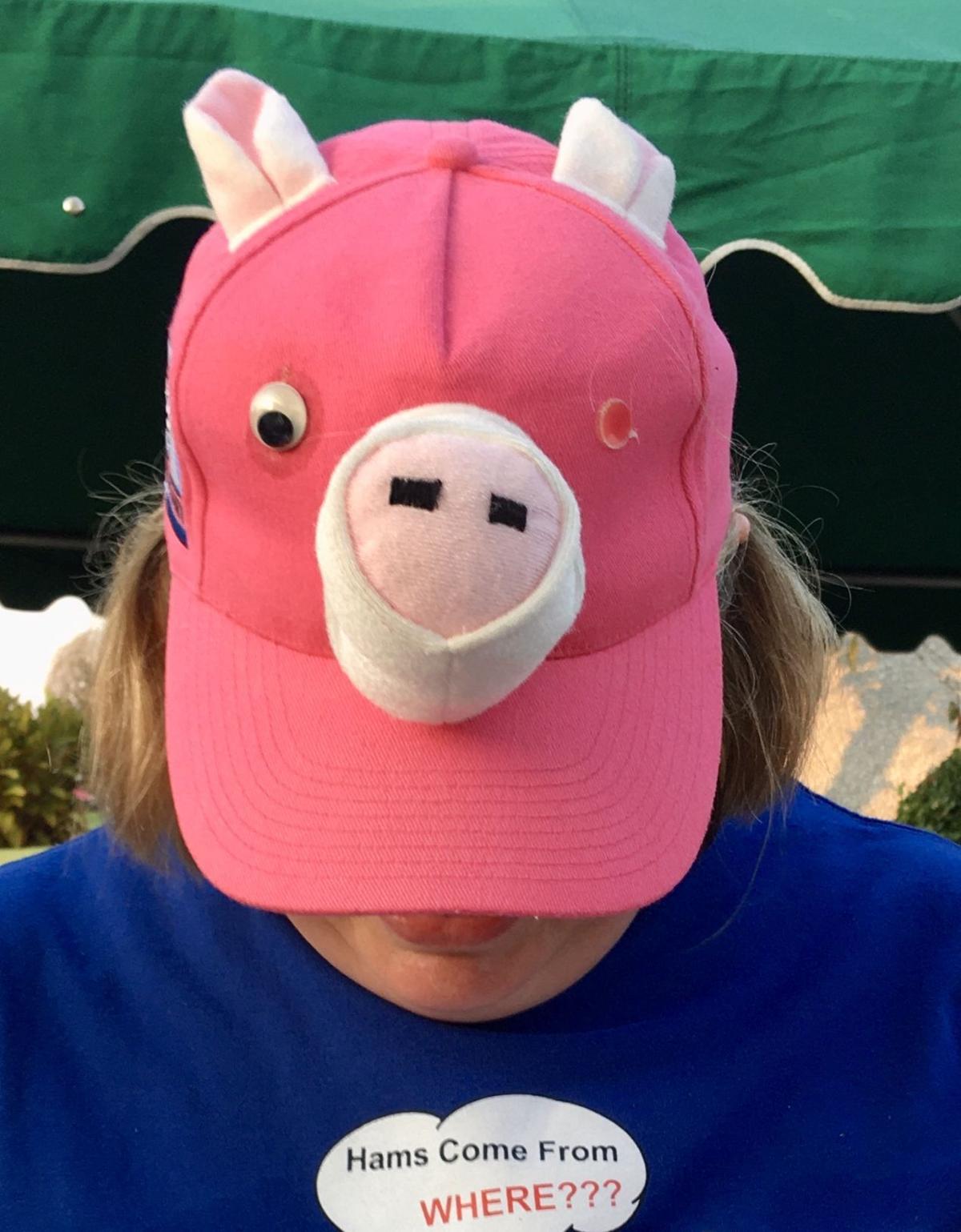 Starr Ames shows off her pig hat during the ham festival.

The biscuits come out of the oven at the ham festival this past weekend.

These baskets were on display at one of the vendor booths.

Volunteer Thomas Bragg works at the Helping Hands tent during the festival.

Starr Ames shows off her pig hat during the ham festival.

In the shadow of the Bank of Cadiz, Starr Ames stood near a table laden with the colors of fall and talked of ham and biscuits, the generosity of local businesses and the 45th Annual Trigg County Country Ham Festival.

“This is the fun part of my days,” said Ames, who was in charge of creating the world’s largest country ham and biscuit at the 2021 festival.

Ames began preparing on Thursday for the biscuit’s arrival. Local businesses donated items like gloves and wraps for the biscuits, and Ames got things ready a little at a time.

The ham festival saw a return to the community on Friday and Saturday in downtown Cadiz after being canceled in 2020 because of COVID-19.

“I’m hoping we have a pretty good turnout this year,” Ames said early on Saturday.

She noted that it had been a crazy morning as she and others from Helping Hands of Trigg County, the agency that oversees the biscuit, busied themselves with preparing it.

Kneaded by hand and rolled out into a large 10 1/2-foot round pan, the biscuit came out of the oven before midday on Saturday.

Divided into a thousand smaller biscuits, it was coupled with country ham and sold to hungry festival-goers who lined up down the street for a chance to sample a taste.

The biscuit had already been the subject of much discussion, with people dropping by the Helping Hands booth on Friday to ask about it.

Organizers said the ham festival’s first day saw good crowds, with about half the people coming from the local community and the other half including people from out of town.

“I thought we had a really good crowd,” Renaissance on Main Executive Director Darlene Butts said of the attendance on Friday, especially since it was the first day of the event after a year’s hiatus, she said.

City Clerk Barbie Johnson said vendors reported that the festival’s first day was their biggest ever in terms of the money they made.

The event’s T-shirts almost sold out Friday, according to Butts, who said people were excited about the return of the ham festival.

She added that parents were able to bring their kids Saturday since they weren’t working, and Butts predicted that final numbers on the festival’s second day would double the attendance on the first day of the event.

Vendor Pat Puckett of Crafty Hands, which sold handmade crafts, novelty items and jewelry, said she did see people returning to the festival as it opened on Friday and hoped to see some good crowds on Saturday.

“We enjoy doing the craft shows and, plus, just being out with people,” Puckett said.

Cadiz resident Tammy Cothran, who came on both Friday and Saturday, noted that it was wonderful to have the festival back this year.

She enjoys the vendor booths and the food and especially liked the car show this past weekend with its old cars and motorcycles.

“I love it,” Cothran noted. “I just love everything about the ham festival.”

Melinda Rathmann came with her grandchildren, who liked the rides, and one man who preferred not to give his name said he likes everything the festival offers.

“I hope they do it every year,” he said.

Angel Burden of Leitchfield set up her booth downtown displayed with the Rada knives she sells, eager for another year at the festival.

She’d set up her Rada Knives for You booth for the first time in 2019 and was looking forward to returning before the pandemic.

Burden did well with her sales two years ago and said she was impressed with the number of people who visited her booth this past weekend.

Over at the Helping Hands tent, Phil Graham awaited the arrival of the world’s largest ham and biscuit, urging festival-goers to enjoy the ham festival. . . and to come get a biscuit.

On Saturday morning, it was organized chaos at the tent, according to Graham.

He said people were having to re-learn things that they’d forgotten after baking the famed biscuit at the festival two years ago.

Rick Bragg, “the gentleman driving the forklift” that takes the biscuit in and out of the oversized oven, was new to the job this year.

“We hope he won’t drop the biscuit where it doesn’t go,” quipped Graham, who serves on the Helping Hands board of directors.

But all went well, and in 2021, the ham festival’s hungry visitors got their biscuits.