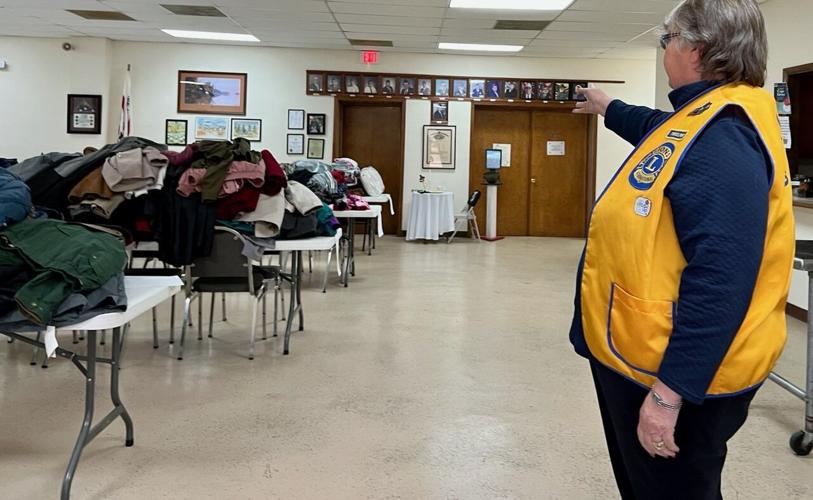 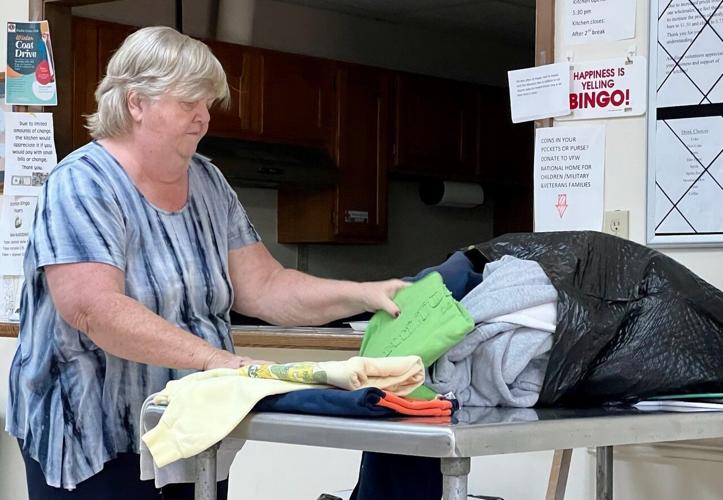 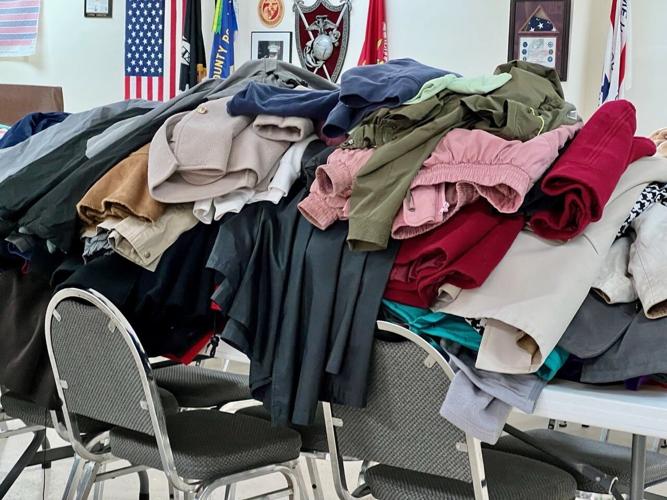 Tables at the Veterans of Foreign Wars were piled high with coats and other items of clothing donated for eastern Kentucky flood victims.

The Cadiz Lions Club requested coats along with hats and gloves as part of a Winter Coat Drive organized to help the residents of six eastern Kentucky counties who were displaced by floods that decimated their homes last June.

But donors offered much more, “anything to keep you warm,” said the Lions Club’s Marsha Pater of the scarves, the bathrobes, the blue jeans, the sweaters and the sweatshirts that were dropped off on Friday and Saturday.

A Lions Club in Webster County brought more than 2,000 pairs of socks on Saturday morning.

There were 34 blankets donated, in addition to 85 women’s coats, 56 men’s coats and 38 children’s coats, and someone gave the local civic club a new package of underwear.

After learning of the 1,000 families living in tents in the flood-ravaged areas of eastern Kentucky, Pater decided to host the coat drive.

“I cannot imagine what the winter holds for them,” said Pater, the local club’s president.

She said Lions Club members are always there when people are in need; the club’s motto is “We serve,” and Pater wanted her club to make a difference in the lives of the flood victims.

“That’s part of the reason we’re Lions, to be there when someone needs help,” she said.

Pater noted that the local club stepped up to help Mayfield when tornadoes ravaged that community, and they’re now offering a helping hand to those in need in eastern Kentucky.

Pater and her husband William Pater learned of the plight of the flood victims while at a meeting in Mount Washington where Steve Pedersen, the first vice district governor in the Lions Club’s District Y, told them flood victims were living in tents and had no winter clothing.

Pedersen’s club in Tollesboro bought 40 coats to donate to the flood victims, and they were gone in a matter of minutes, Pater shared.

In its recent endeavor, the Cadiz club also reached out to the Hopkinsville Lions Club, which collected 40 coats this past Saturday.

The Cadiz club got almost $600 in donations, and Pater and other club members were to travel on Sunday to eastern Kentucky to deliver the cash donations, clothing and blankets.

The donations were to be received in Tollesboro and divided among Lions Clubs in Neon, Hyman, Jackson, Pikeville, Hazard and Whitesburg for distribution in those counties.

Pater said people may continue to drop off items at the VFW in Cadiz since the local club will have other meetings in eastern Kentucky and will be able to deliver those items.

Checks for monetary donations can be made payable to District 43Y Disaster Relief Fund.

Pater noted that the response to her club’s Winter Coat Drive has been overwhelming.

“Everybody that has heard the story that dropped off donations has thanked us for what we’re doing,” said Pater, noting she just wants to offer a helping hand to eastern Kentucky.

“What I am hoping to gain personally is to assist these people that are in need,” she said.