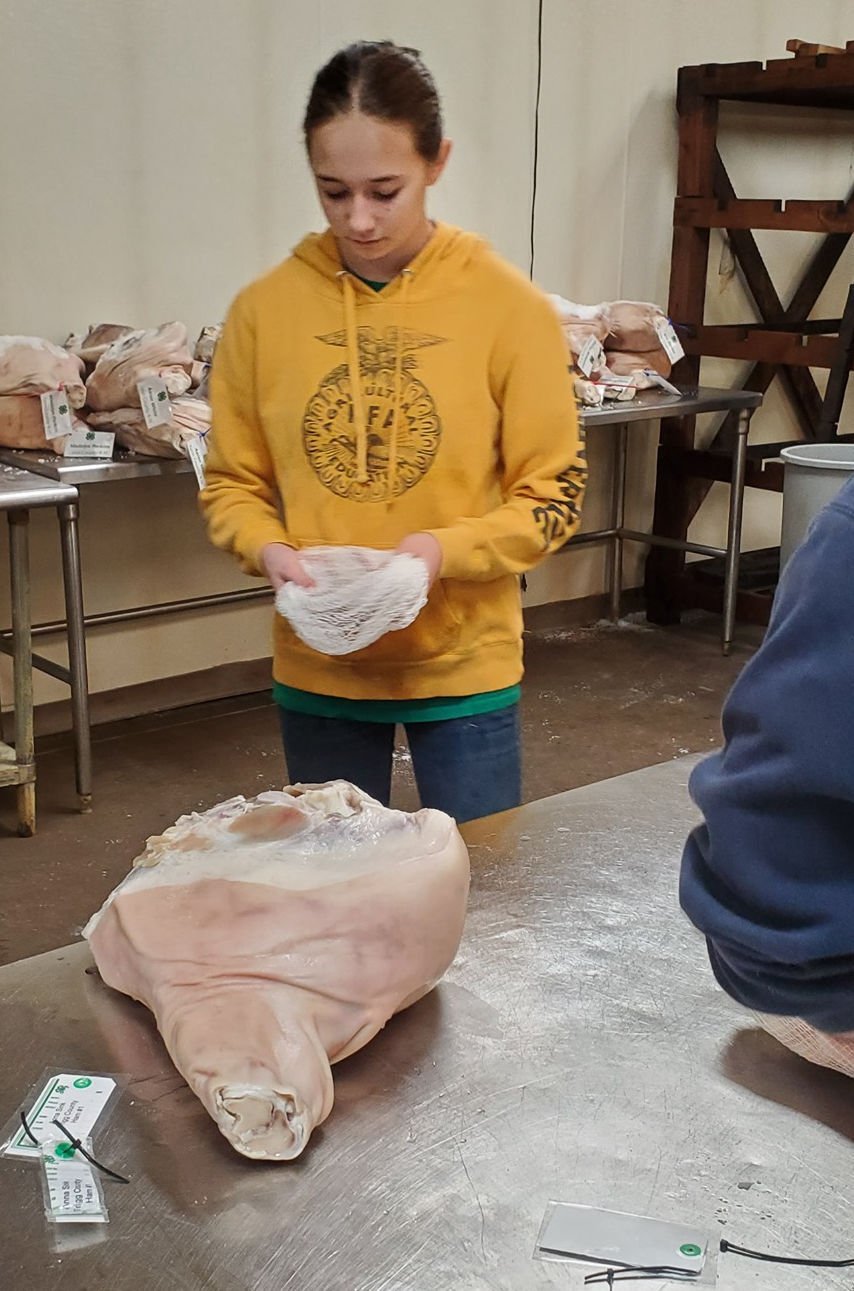 In February, Trigg County 4-H’er Anna Sink started working on her wrinkled ham to prepare it for the state competition. 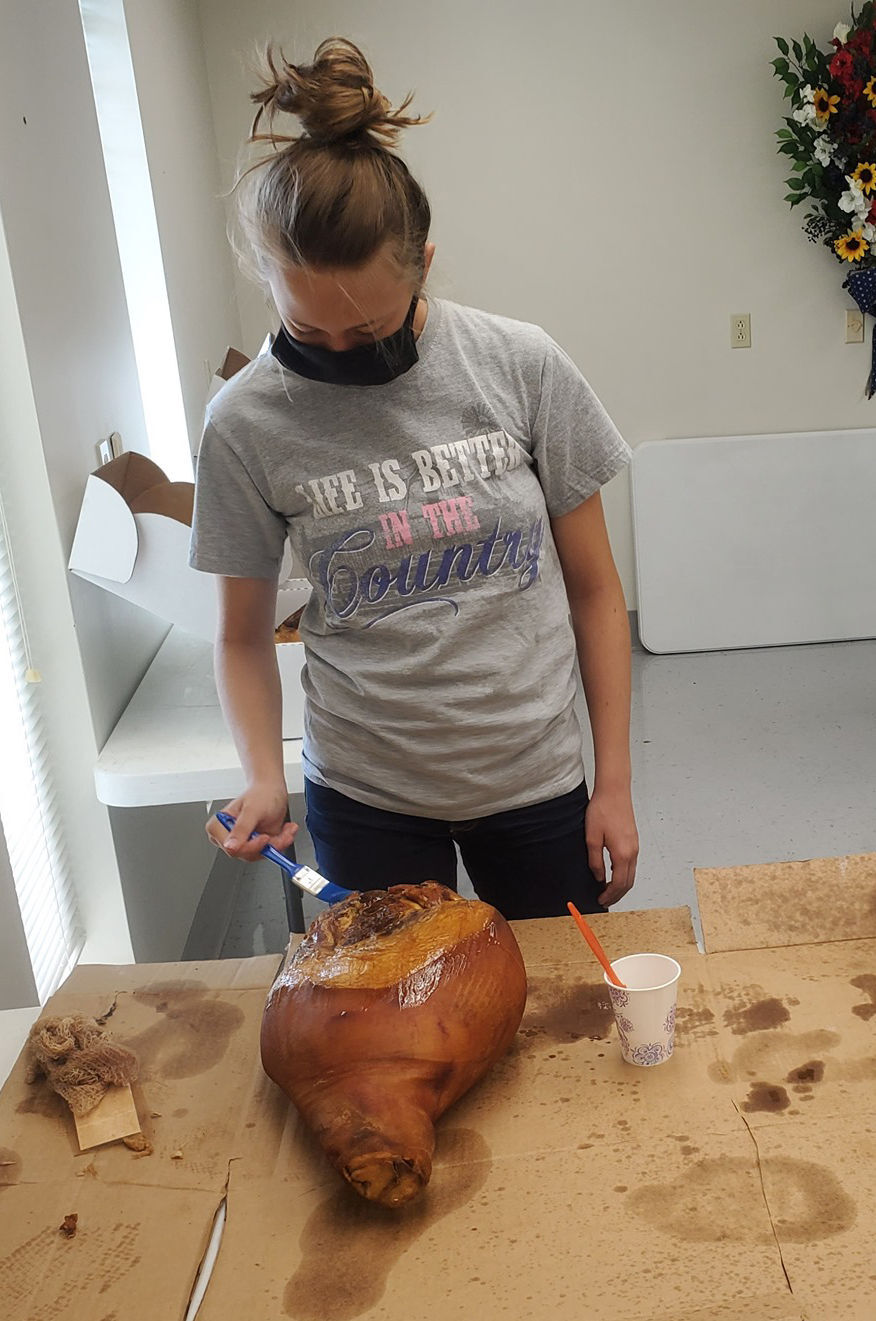 Trigg County 4-H’er Anna Sink, 14, gives her country ham the final touches before sending it to the Kentucky State Fair competition in August. Her entry was named the grand champion for the entire state in the smoked ham category.

In February, Trigg County 4-H’er Anna Sink started working on her wrinkled ham to prepare it for the state competition.

Trigg County 4-H’er Anna Sink, 14, gives her country ham the final touches before sending it to the Kentucky State Fair competition in August. Her entry was named the grand champion for the entire state in the smoked ham category.

Judges selected Sink’s entry from hundreds of hams entered by 4-H’ers from across the state.

“It’s not just about me. I feel like I’ve done something for Trigg County because we’re a team,” said Sink, 14. “I worked hard on the ham so it definitely makes me feel proud to know that my hard work has gone into something good.”

The Trigg County High School freshman and the daughter of Dr. Ian and Jennifer Sink of Cadiz has been in 4-H since she was a young Cloverbud. She has entered the state ham competition for the past four years and placed second and third in her age division.

“There are hundreds of kids. This is a big deal,” her mother said about the grand champion honor.

The victory is more meaningful to the teen because she was critically ill and hospitalized in January. Sink was diagnosed with immune thrombocytopenic purpura. ITP is a rare bleeding disorder in which the immune system destroys platelets, which are necessary for normal blood clotting. Sink spent a week undergoing tests and treatment at Vanderbilt University Medical Center in Nashville.

Just one month later, Sink was weak physically but mentally determined to get back to her routine. She traveled with other Trigg 4-H’ers to Broadbent B&B Foods in Kuttawa to select her ham and to start prepping it for the state competition.

“I had just got out of the hospital and I was still recovering from ITP. I lost a lot of platelets, so I was very weak. I could barely pick up the ham. One of the guys at Broadbent carried it for me,” she said. “February was very hard for me. I was so tired all of the time. I really had to push myself to pick the ham up, to salt it and to make sure it looked the best it could.”

When selecting a ham to prepare for state, her mother said Sink usually digs through a stack of hams to find the perfect one, but ITP had taken its toll.

“She literally walked and picked up the first ham she saw,” Jennifer said. “It wasn’t about looking for the perfect ham this year, it was taking what you got and doing what you can do with it.”

This year Sink said her country ham required some additional attention on her part.

While undergoing weekly blood tests and doctor’s visits, Sink monitored her ham’s progress throughout the spring and early summer. Her platelet count improved and she was feeling stronger, her mother said.

In early August, Trigg County 4-H Extension Agent Shelley Crawford delivered all of the country hams from her nine 4-H’ers to Bowling Green.

Because of the coronavirus outbreak and the closing of the Kentucky State Fair to the general public, the competition was judged at the Warren County Cooperative Extension Office.

For the competition, 4-H’ers normally enter a country ham, as well as deliver a speech on a given topic. This year, because of the pandemic, contestants wrote essays. Sink’s 800-word essay was about the “History of Country Ham.”

“She is a storyteller,” her mother said. “She usually scores really well with her speeches. She enjoys talking, so doing the essay was a bit more, but I’m so proud of her.”

Grand champions are determined by the combination of the two highest scores from the 4-H’ers ham (60%) and essay (40%). In judging, country ham entries are critiqued on several criteria, including the appearance, shape and size. Essays are judged on knowledge of the subject, organization, expression and conventions, like grammar and spelling.

In addition to winning grand champion, Sink placed first in her age division for her smoked country ham and first overall in her age group. For each win, Sink will receive plaques.

“Whenever I found out that I placed first and won grand champion ham, it was a shock,” Sink said. “Me and my mom, we were just jumping up and down.”

Like the Sink family, Crawford found out the results on Monday night.

“I am just over-the-top thrilled for her,” she said. “She works really hard at everything she does. “It truly is a representation of who she is and the hard work she puts in.”

While thrilled to be state grand champion, Sink also is celebrating because she’s feeling better than she did in January.

Trigg County 4-H’ers will be doing a ham show and exhibits Oct. 7-9 at the Lexie Bush Convention Center in Cadiz. Drop offs will be on Oct. 6. Ham judging will be the morning of Oct. 7. The exhibits will be open to the public with COVID-19 guidelines from noon to 5 p.m. Oct. 7 and from 8 a.m. until 6 p.m. Oct. 8.