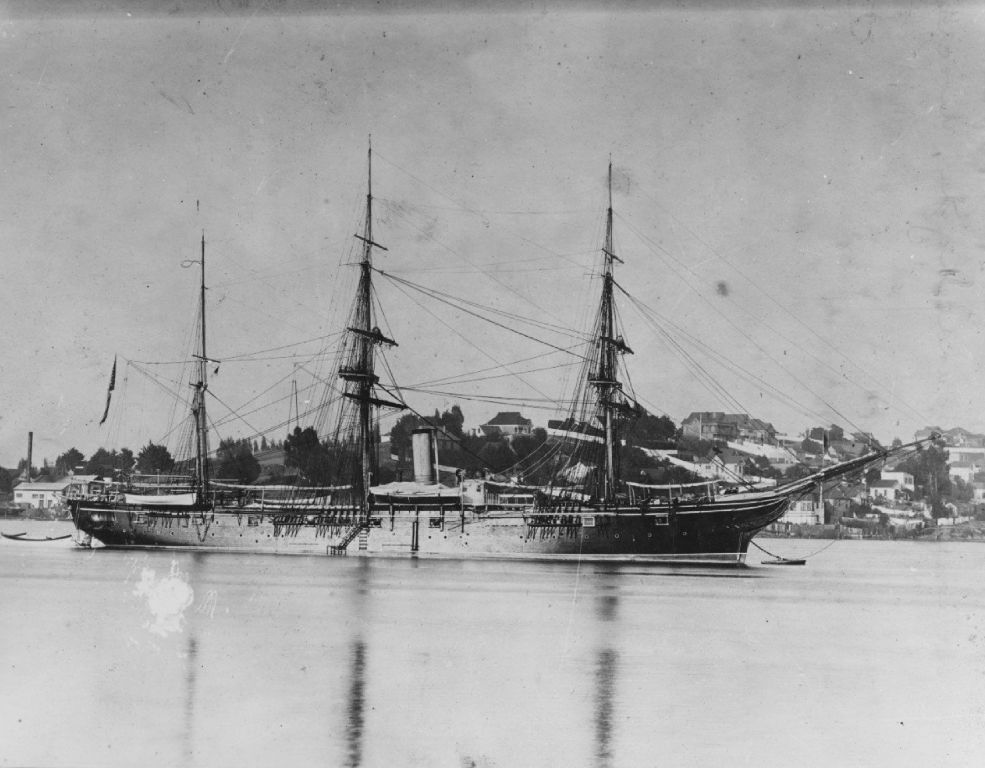 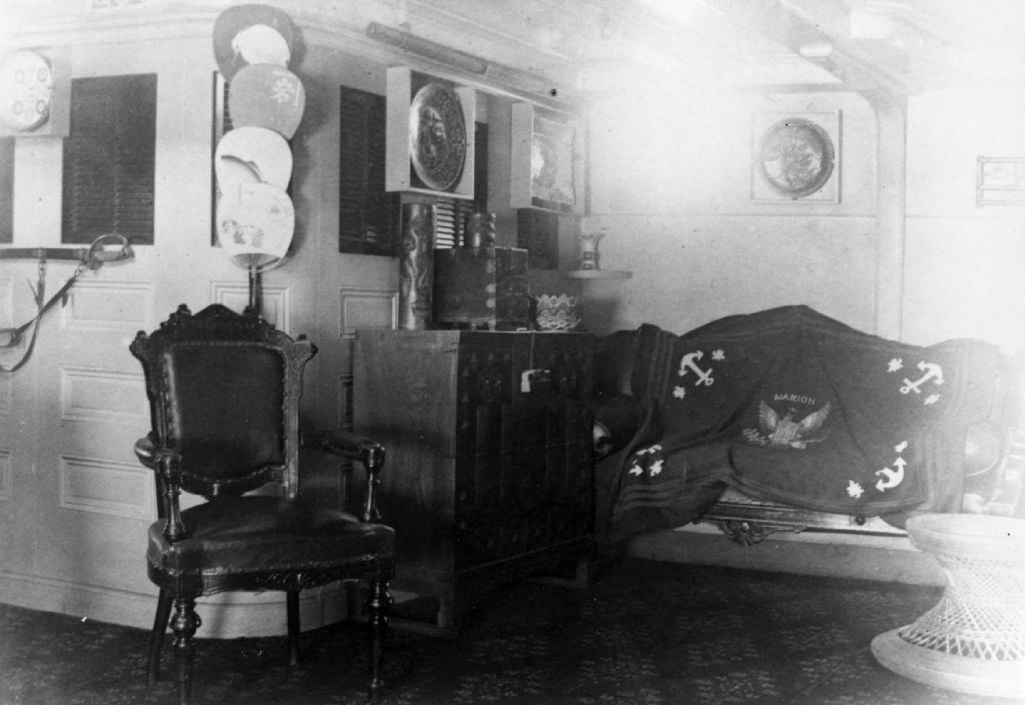 Captain’s cabin is shown aboard the USS Marion. 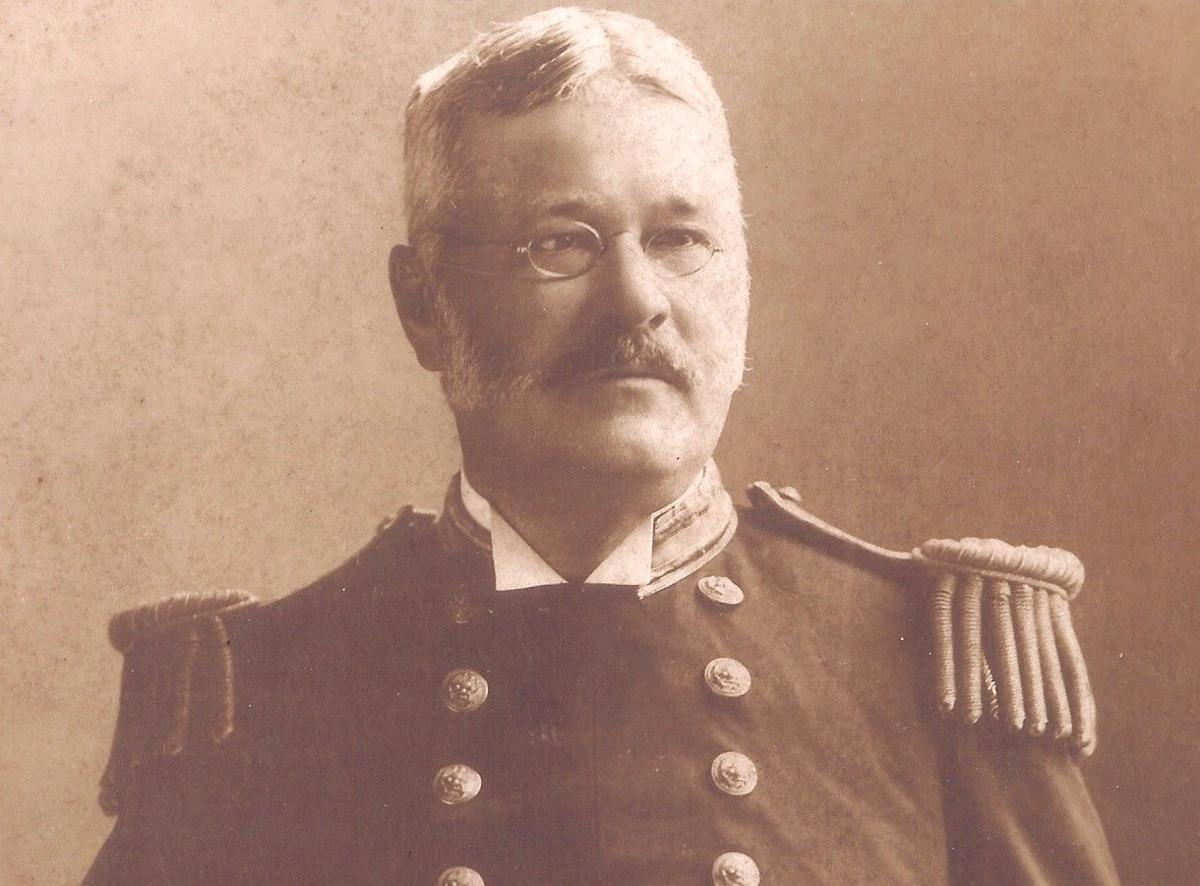 Captain’s cabin is shown aboard the USS Marion.

U.S.S. MarionSilas Terry obtained his first ocean-going warship command in May 1881, when he was made captain of the U.S.S. Marion. The Marion was built in 1839 and then so extensively rebuilt in 1870-71 as to be for all practical purposes a new ship. Marion was a 117 feet long, 32 feet wide, 566 tons displacement three-masted sailing ship that had an auxiliary steam engine and three-blade brass propeller.

The Centennial History of the United States Navy Yard at Portsmouth, N.H. published in 1876 described the Marion as “yacht-like” with “powerful armament and elegant engines.” When using her engine, the Marion was capable of 11 knots, but relied on her sails for long distance cruising. The Marion had the sharp concave bow, sleek narrow hull, flush deck, and elaborate rigging of a fast-sailing clipper ship and performed like one under sail. Marion was a beautiful, but demanding ship that only an expert captain and skilled crew could handle.

In the event of war with a foreign power the Marion’s task would have been to roam the oceans destroying the enemy’s merchant shipping. Limited only by the amount of food and water that could be carried and the endurance of their crews, hybrid sail-steam warships like the Marion — called sloops-of-war by the U.S. Navy and corvettes in Europe — could stay at sea for as long, and travel as far without touching at a port, as a modern nuclear powered vessel. Though made obsolescent by the advent of ironclads, small wooden sailing ships with auxiliary engines similar to the Marion continued to patrol and police the distant oceanic empires of Britain, France and Germany until the First World War.

Terry traveled to Rio de Janeiro, Brazil, aboard a civilian steamer in August 1881, and then to Buenos Aires, Argentina, where he took command of the Marion. The Marion was at anchor in the River Plate (Rio de la Plata) at Montevideo, Uruguay, when, on Nov. 10, 1881, Terry received an urgent telegram from the Navy Department instructing him to proceed to Heard’s Island, one of the Kerguelen Islands located in the southern Indian Ocean 2,860 miles southeast of the Cape of Good Hope and 926 miles north of Antarctica. Heard’s Island is a bleak, uninhabited volcanic island about 30 miles long and 15 miles in width. The island is so distant and remote from the shipping lanes that it did not even appear on charts carried aboard U.S. Navy warships. Terry’s orders were to search for survivors of the Trinity, a New London, Connecticut, based whale hunter that had met an unknown fate in the area sometime after Sept. 4, 1880, when the ship’s Capt. John L. Williams and first mate John Esmond left letters addressed to their wives in a whalers’ mail drop on uninhabited Desolation Island, another island in the Kerguelen group.

Terry got the Marion underway on Nov. 14, 1881, and arrived at Cape Town, South Africa, after 28 days at sea. While the crew were filling the ship’s bunkers with coal and loading supplies, Terry and the Marion’s navigator Lt. George Augustus Bicknell III, son of an Indiana congressman and a future admiral, called on the Royal Navy officer-in-charge at Cape Town and borrowed a British Admiralty chart of the search area. Terry and his crew departed on Christmas Eve headed for one of the least known, coldest, stormiest, and most dangerous expanses of ocean on earth. Terry knew that he had only a narrow window of opportunity to conduct the search and return before the reasonably good weather and round-the-clock sunlight of the brief southern hemisphere summer gave way to an Antarctic winter of intense cold, ferocious gales, and perpetual darkness.

Marion’s lookouts sighted McDonald Island, a barren black rock a third as large as Trigg County that is an outlier of Heard’s Island, on the morning of Jan. 12, 1882. At around 4 o’clock that afternoon the low cloud cover cleared to reveal the enormous snow-covered cone of 9,006 feet high Mount Emperor William, the steaming active volcano that gave rise to Heard’s Island. In an account given to the Providence, Rhode Island, Evening Telegraph on April 10, 1882, John Esmond described the island as “covered nearly all over with snow and ice, the glaciers reaching quite down to the water.”

As the Marion cautiously approached the dangerous rocks that surround the island, lookouts sighted smoke from a fire fueled by seal blubber burning on shore. Then, from a distance of four miles, the lookouts saw four crude huts made of stones, boards salvaged from the wrecked Trinity, and sealskins. Several men emerged from the huts and began waving blankets. Terry ordered the Marion’s battle flag raised to let the stranded men know that the U.S. Navy had arrived to rescue them.

Just then, at the very moment the Trinity’s men thought that their rescue was at hand, a fierce gale and snow squall struck. The Marion was suddenly in danger of being driven onto the rocks, the same fate as had befallen the Trinity on Oct. 17, 1880. Terry steamed out to sea until the storm passed. The weather improved enough the next morning for the Marion to send boats ashore and rescue 33 joyous castaways. In what seemed like a miracle, all but two of the Trinity’s crewmen, who were caught out in a blizzard and froze to death, had survived for 15 months stranded on the inhospitable island by hunting seals, collecting bird’s eggs, and harvesting “a kind of wild cabbage that grew on the island in plenty.”

The Marion arrived back at Cape Town on Monday, Feb. 20, 1882. Terry granted his crewmen a well earned liberty ashore. The sailors did not get to enjoy their time off the ship, however. The next day, British authorities asked Terry to render assistance to the Poonah, an immigrant ship bound for Australia with 476 people aboard, including families with children, that had run aground near Table Bay and was in danger of being battered apart on the rocks. Breaking waves made abandoning the ship in lifeboats too dangerous. The British steamship City of Liverpool and a Royal Navy warship had already tried to rescue the stranded Poonah, but there was too little room between the rocks for them to reach the ship and then turn around and return to the open sea. Terry hurriedly gathered his crew and steamed to the scene.

He quickly assessed the situation. The Poonah, an iron-hulled propeller driven steamship equipped with auxiliary three-masted barquentine sails, was, at 349 feet long and 2,250 tons, four times larger than the Marion. The big ship had a draught of nearly 29 feet — 13 feet greater than the Marion. The ship had passed through a narrow channel between two clusters of shallowly submerged rocks before going aground on gravel and sand. Waves were breaking over the rocks and causing dangerous currents to swirl round them.

Terry steered the Marion, which was smaller and more maneuverable than the British ships that had been unable to reach the Poonah, safely through the dangerous, rocky shoals to within a cable’s length of the stranded ship’s stern. The Marion’s boat crew braved the dangerous waves to connect a hawser to the Poonah. With black coal smoke roiling from her funnel and engines turning at full power, the Marion pulled the larger Poonah free and towed the ship and her passengers to safety.

The senior Royal Navy officer on scene wrote in his report of the incident, “As a sailor of nearly 30 years experience I have never seen work carried out in a better manner than was done on the 23d February on board the United States corvette Marion under Captain Terry’s command.”

Cape Town honored the Marion’s entire crew with a joyous celebration. Terry’s action in saving the Poonah earned official praise from the British government and a note of thanks from Queen Victoria. A British newspaper commented, “Had Captain Terry been a British subject, the rescue of the Poonah would have earned him a knighthood.”

(U.S. military officers were prohibited by law from accepting titles, medals or other awards from foreign nations until World War I.)

In a note published in the Army & Navy Journal acknowledging the many thanks and commendations that he received, Terry wrote modestly, “In going to the assistance of the Poonah I was but performing a duty that every sailor owes to another.”