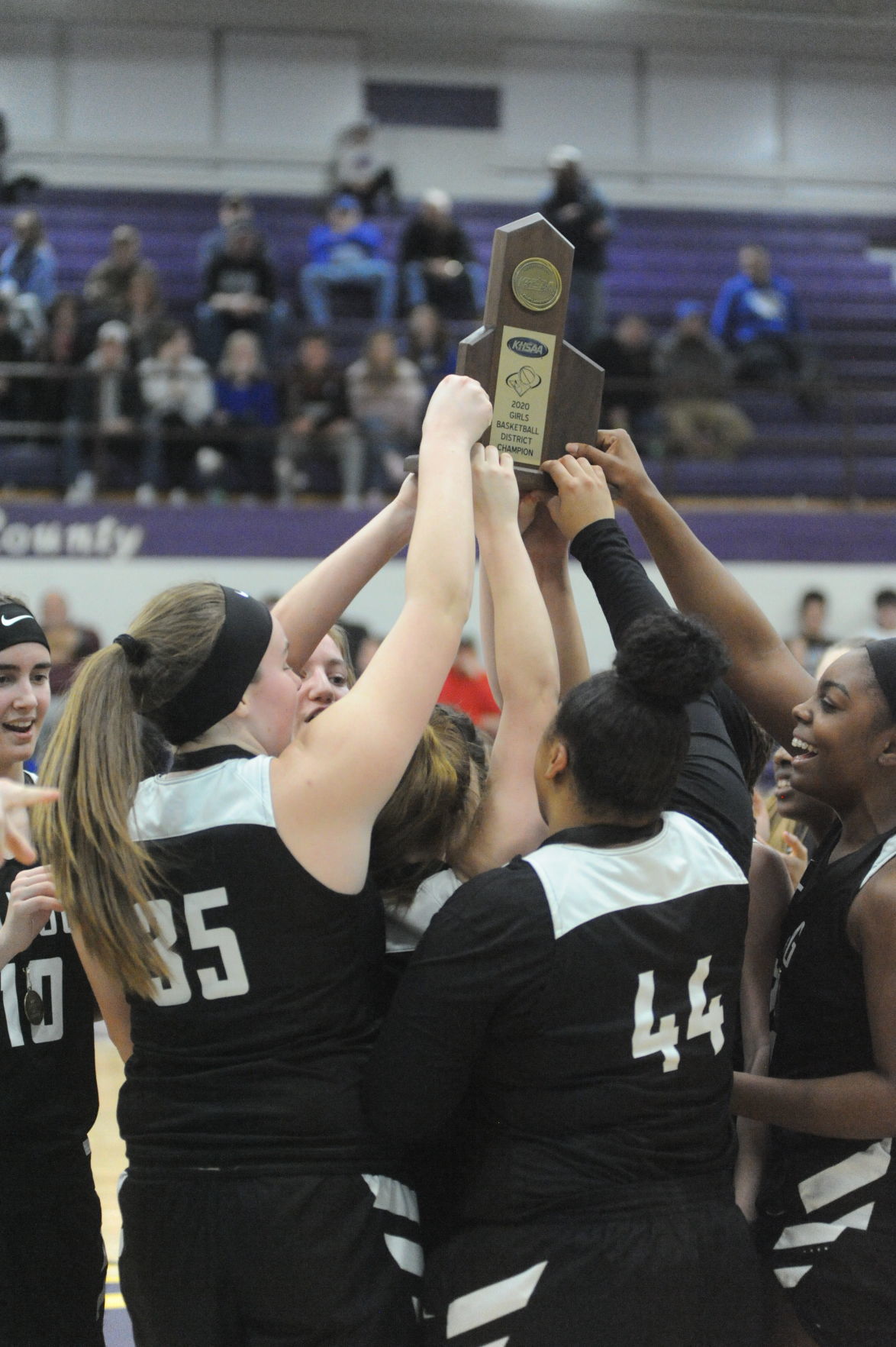 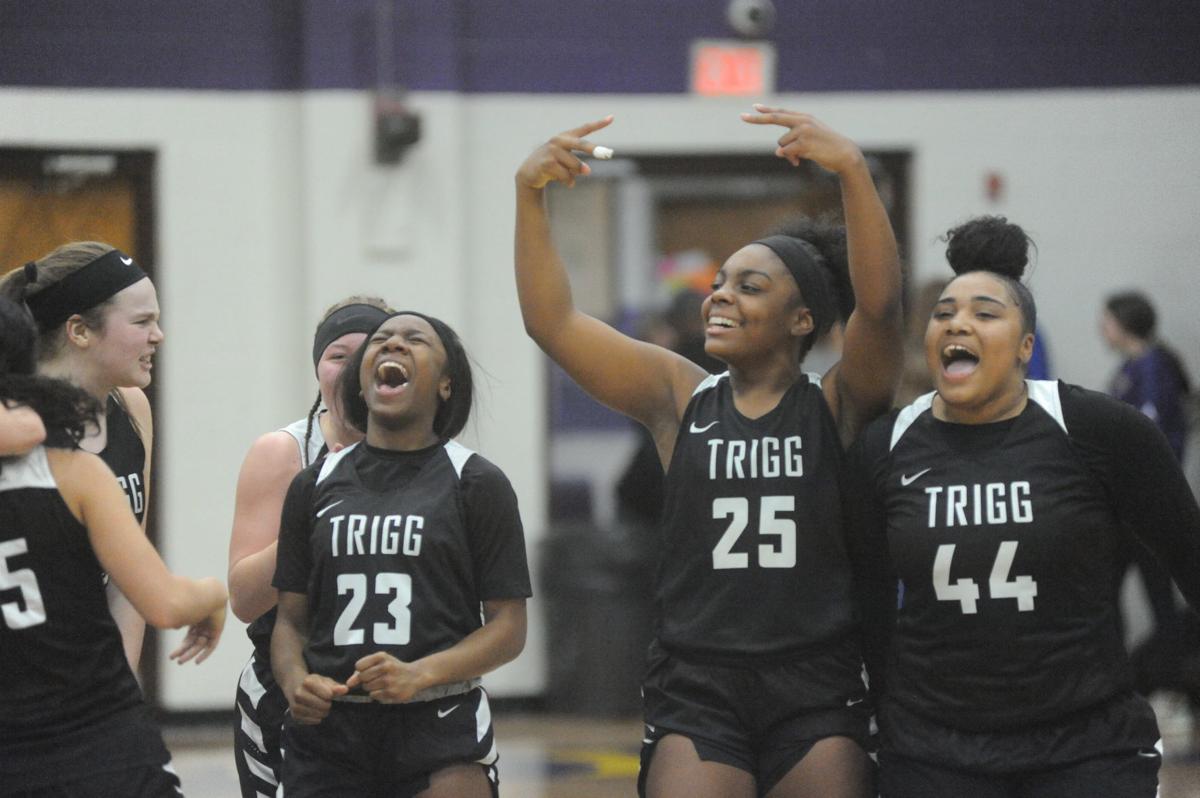 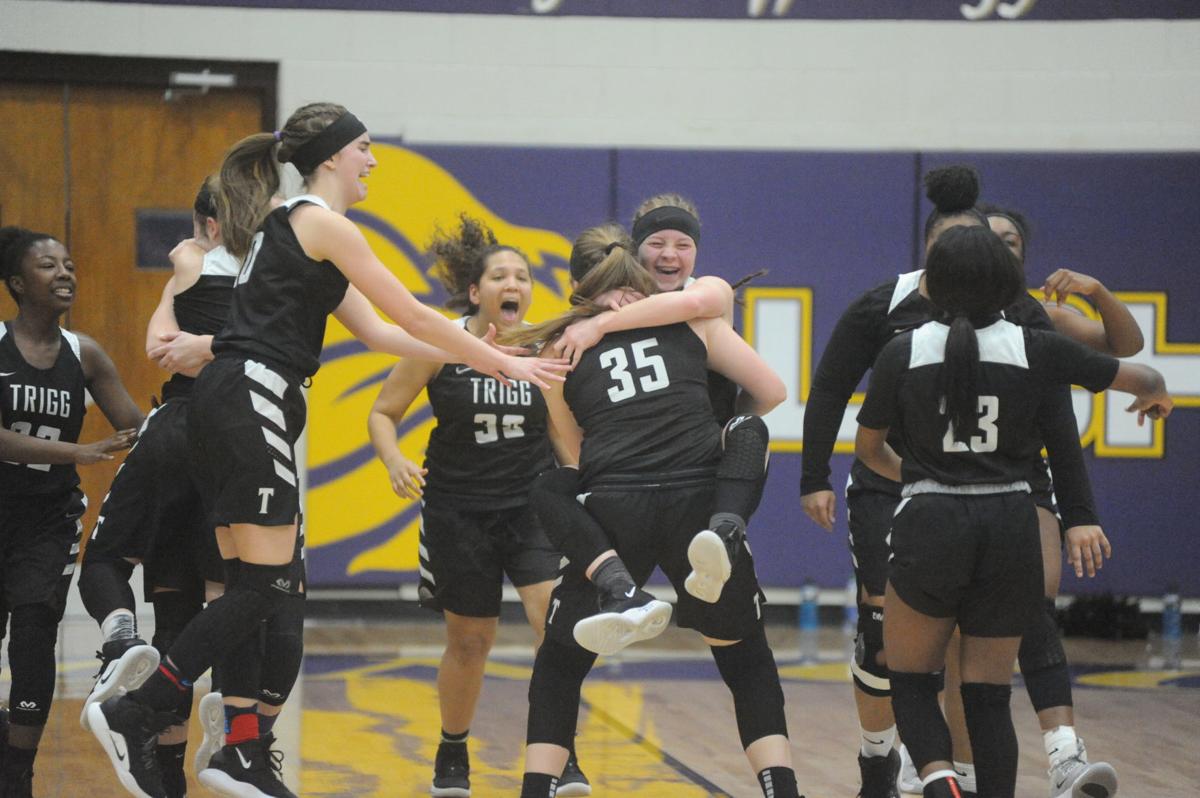 Trigg County’s Olivia Noffsinger jumps into the arms of Marleigh Reynolds after the Lady Wildcats’ win over Crittenden County Thursday at Lyon County.

Trigg County’s Olivia Noffsinger jumps into the arms of Marleigh Reynolds after the Lady Wildcats’ win over Crittenden County Thursday at Lyon County.

EDDYVILLE — Four years ago, the Trigg County Lady Wildcats won just six games but Thursday, they did something that’s never been done in program history.

Trigg County beat Crittenden County, 48-40, at Lyon County to win the Fifth District Tournament title as the Lady Wildcats go back-to-back for the first time ever after winning the district crown last season.

“It’s almost surreal,” Trigg coach Cory Coble said. “It’s kind of the same thing as last year. You win it and you can’t really absorb it yet. You see the nets being cut down and people taking pictures and it’s kind of like where am I at? We always talk about it, four years ago we win six games and then you come in here and we’ve won 24 games and you win back-to-back district championships.

“I think that’s just a testament to the kind of work ethic that our girls have and the determination. A lot of players, you win six games and they could have gone home and said we’ll try something else, this program’s not going to be successful. But they should up in the summer, they put in the work for three-straight years and hard work pays off. We got the outcome we wanted.”

The game was a battle from the opening tip as neither team would able to accumulate a double-digit lead throughout the contest.

Coble said they had an important gameplan coming in and that was to limit the two biggest threats on the Lady Rocket roster.

It was tied 10-10 after one and the Lady Rockets looked as if they’d gain some momentum going into the break after a strong start to the second quarter.

Noffsinger scored the last eight Lady Wildcat points in the frame, including a 3-pointer just before the buzzer to give her team a 24-21 lead at the break.

“I realized as a team we were kind of getting down,” she said. “They were picking up the speed, we were kind of losing our speed so I felt like I needed to boost the team up a little bit.”

Noffsinger played more minutes last season than she did her seventh-grade year but Coble said she’s grown a lot the last two seasons.

“It’s just a sense of resiliency,” he said. “Me and her have been together too. I coached her as a sixth-grader then on up. Just to see her grow and develop. Crittenden made runs and then she would help us back. Crittenden would make a run then Adri (Phillips) would come in clutch for us. The best thing about that is that she’s a freshman. I get to keep her for three more years. We’ll take that any day. Her and all of our players, just the confidence they have in each other to make plays, I just can’t talk about that enough.”

Senior Rylee Bush has been around Noffsinger a lot as her older sister Emily Noffsinger is a senior as well.

“She’s like my little sister and I just love her so much and love her dedication toward the game,” Bush said. “She’s always in the gym, always shooting on the gun and she has a bright future.”

With the Lady Wildcats down 34-31 with 6:40 left, Trigg County turned it up to another level.

TC went on a 10-3 run to take control of the game as they put it away at the free-throw line.

The Lady Wildcats went 20-of-27 from the stripe, which was above their season average.

Bush got in foul trouble only and finished with five points, but the senior said she never thought she’d see the program get to where it is during her career as she was a freshman when they won just six games.

“Absolutely not,” she said. “I was hoping that we’d win 10 games. I never imagined that I’d even be playing in a regional tournament.”

Bush said her teammates rallied when she got in foul trouble.

“I love them from the bottom of my heart,” she said. “One thing that teams really have to look out for playing against us is we all pretty much average the same. We don’t have somebody that drops 20 on any given night and just takes it away. I love the way that we play as a team.”

The Lady Wildcats now look to the Second Region Tournament next week at Christian County.

A year ago, Trigg County drew Henderson County in the first round of the tourney and with the Lady Colonels’ loss to Webster, that possibility is out there again.

“It is what it is,” Coble said. “You go to the draw and if we draw Henderson then you draw Henderson. We did that last year. It was great, turned out great for us. We feel like we were competitive against Hoptown and County, beat Caldwell once this year. You take your chances and whoever you draw, we play the best game and we prep for it, watch a bunch of film. Obviously my girls are good at executing a defensive plan so we’ll do our best.”

During the Lady Wildcat celebration, Noffsinger was asked what she’s looking forward to in her next three years and she said it includes more district titles.