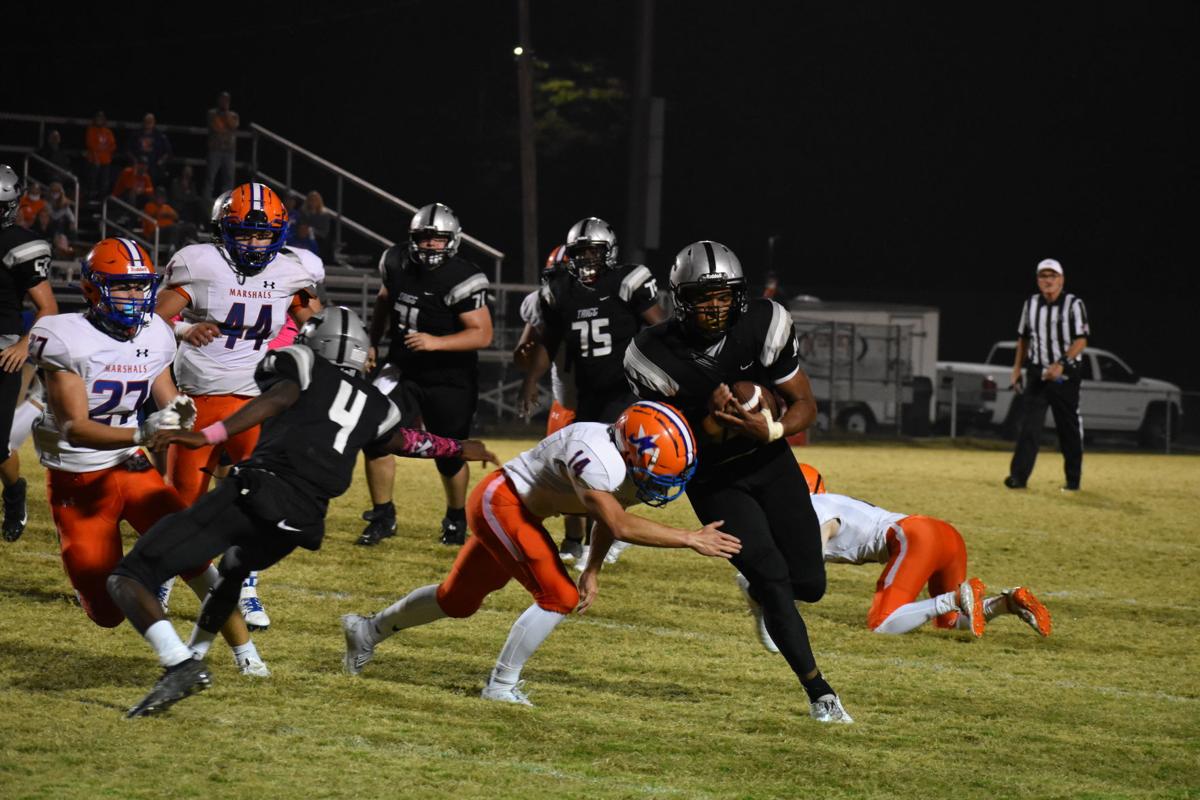 Trigg County’s Kendric Adams attempts to break a Marshall County tackle on the way to a first down. 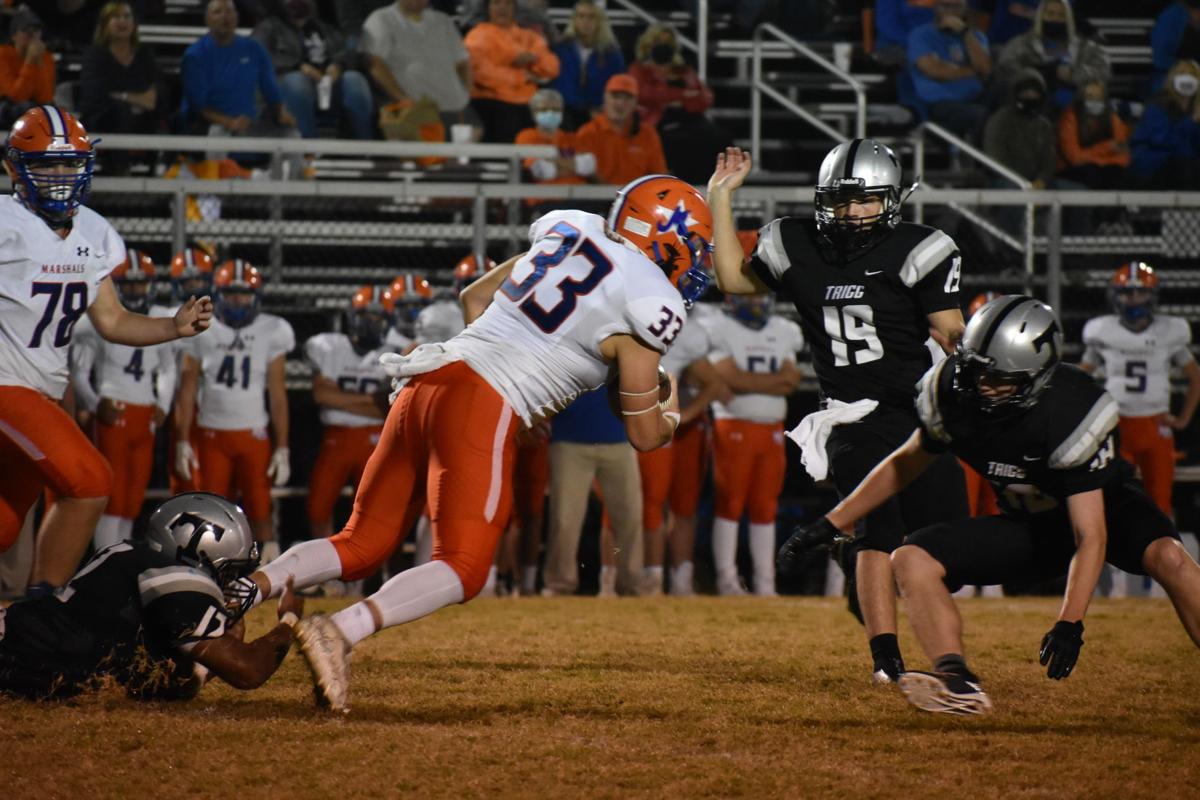 Marshall County’s Garrett Parker gets a first down after a shoestring tackle by a Trigg County defender.

Trigg County’s Kendric Adams attempts to break a Marshall County tackle on the way to a first down.

Marshall County’s Garrett Parker gets a first down after a shoestring tackle by a Trigg County defender.

Trigg County nearly mounted a comeback after losing the lead at 9-0, but never gained the lead again Friday night as Marshall County handed the Wildcats their fourth straight loss in a 35-25 showdown.

The Wildcats had all the momentum coming out of the gate, as a solid punt from freshman Jhaden Vaughn put the Marshals at the eight-yard line and Trigg County took advantage.

After a two-yard loss, junior running back Kendric Adams delivered a massive hit for a safety to take a 2-0 lead with 8:37 left in the first quarter.

The Wildcats could’ve jumped out to a big lead, but a plethora of dropped passes led to missed opportunities.

Nonetheless, they were able to connect when they needed to. Sophomore quarterback Jacob Wease was able to find senior wide receiver Connor Wallace on a slant for 21 yards and the first touchdown of the night with 1:52 left in the first quarter.

Just as it seemed Trigg County would enter the second quarter with a 9-0 lead, junior quarterback Quinn Smith found junior Logan Reese for a 71-yard touchdown to close out the first quarter.

From there, the Wildcats continued to struggle offensively. Dropped passes and penalties continued to hurt them, which Head Coach Mark Peach acknowledged at halftime.

“Offensively we just can’t get out of our own way,” Peach said. “I lost count of how many dropped passes after six. I don’t know, we’re probably somewhere between six and 10 easily.”

Marshall County pounced one these miscues, with a little luck on their side.

A questionable pass interference call against Trigg County on 3rd and 13 moved the Marshals to the 41 and they took advantage.

Smith connected with Reese on the ensuing play for 28 yards and then took a keeper into the end zone to take a 14-9 lead.

With 2:23 to play, Wease and the Wildcats charged downfield looking to score. Sitting at the 22, a wrong route was run by the Trigg County receiver leading to an interception by Reese at the goaline.

Reese took it the length of the field for a major pick-six, giving the Marshals a 21-9 lead with the first half coming to a close.

Peach was optimistic going into the locker room despite the Wildcats’ offensive struggles, saying his guys were putting forth maximum effort.

“Proud of our guys defensively,” Peach said. “The guys were bringing it. What a great spirit and fight about them … I’m proud of our kids. They’re playing extremely hard.”

However, Marshall County wasn’t taking their foot off the gas.

Sitting at the 38, Marshall set up trips-right and pulled defenders away from the middle of the field leaving a wide open path to the end zone for Smith.

However, with their backs against the wall, the Wildcats weren’t going down without a fight.

Smith went down for the Marshals and immediately his replacement Conner Nix botched a snap leading to the second Trigg County safety.

After a solid return by junior Dakota Lockard on a squib kick from Marshall County followed by a face mask, the Wildcats sat at the 19. This led to a 14-yard touchdown for Martin from Wease, making it a 28-18 ballgame.

An unlucky turn of events occurred for Trigg County on the next defensive drive, as Smith returned to the game and his pass was deflected and fell into the hands of Reese for a 26-yard touchdown. This gave Marshall County a 35-18 lead with 10:15 to play.

The Wildcats retaliated quickly, as Wease found Martin for a 72-yard touchdown to cut the Marshals lead to 35-25 with 9:54 to go.

Trigg County got the ball back with 8:30 to go after a defensive stop and looked to march to its end zone in hopes of a single-digit lead for the Marshals.

Taking about five minutes off the clock, the Wildcats were unable to score and Marshall County took possession with 3:19 to go.

Trigg County wouldn’t get the ball again, as the Marshals ran out the clock en route to a 35-25 win.

The loss marked the Wildcats fourth straight, moving them to 1-4. Despite the tough loss, Peach was proud of the maturity his team showed.

“I told our guys, I’m very proud of them,” Peach said. “We fought to the very end. I thought we grew up a lot tonight. Listen, that’s a 6A school right there. They’ve got I don’t know, 1,800, 1,900, whatever their enrollment is over there and we fought them to the very end and had plenty of opportunities to win it.”

Looking to snap its four-game losing streak, the Wildcats will stay home and take on Webster County in a district battle at 7 p.m. Oct. 16.

“We gotta get it,” Peach said. “Because now we’re trying to play for a home playoff game. We’re going to spread it out two by two and try to throw it around, so we’ll have our work cut out for us.”