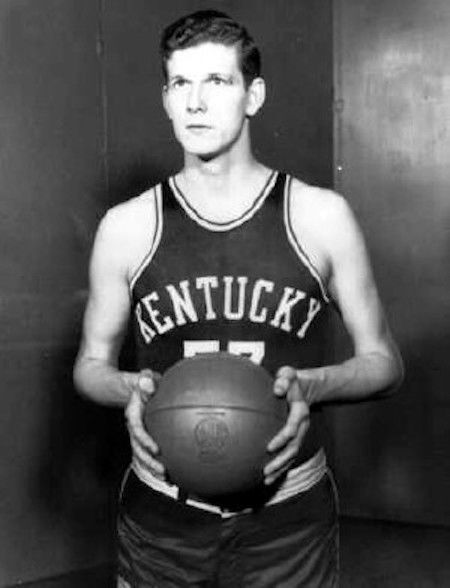 Bill Spivey was an All-American at UK and former Kentucky player Guy Strong says Spivey is better than any center UK has had since then. 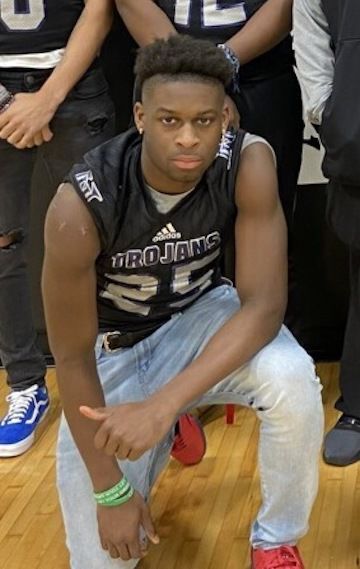 North Hardin safety Jordan Lovett is one of four Kentucky commits who will be playing in Friday’s Frederick Douglass-North Hardin season-opening game in Lexington. 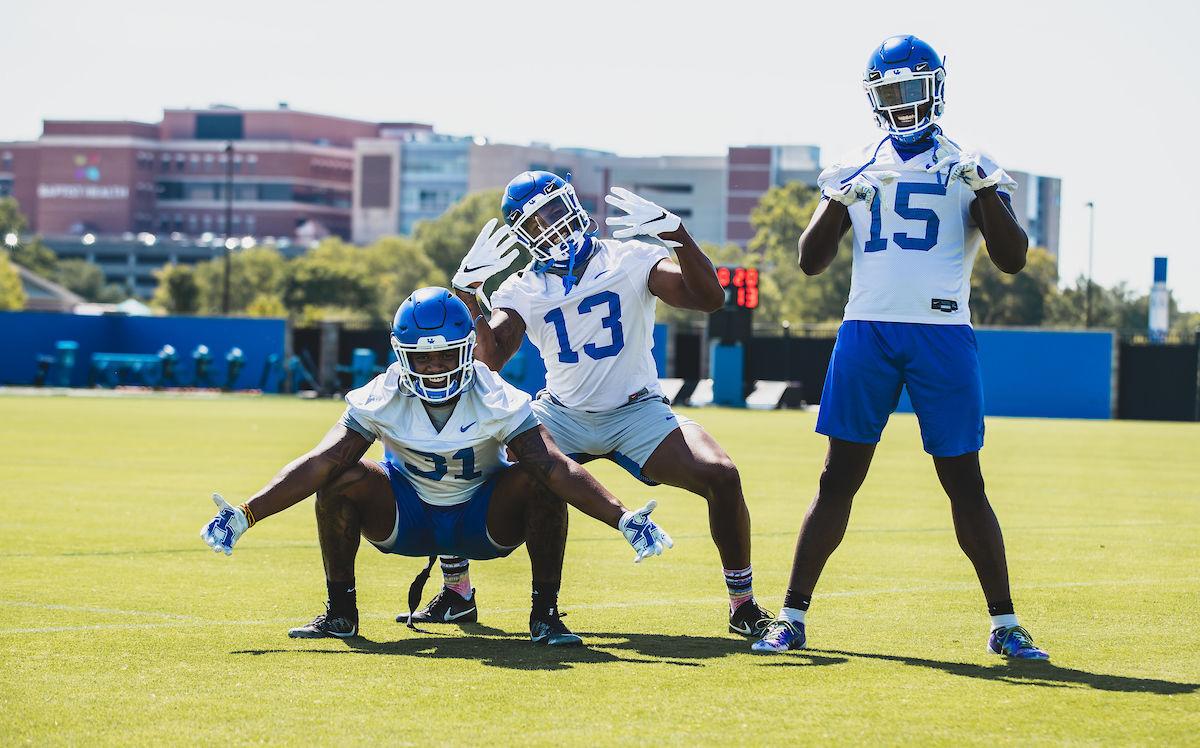 Redshirt freshman JJ Weaver (13) could be ready to join Boogie Watson, left, and Jordan Wright as playmakers on the UK defense this year.

Bill Spivey was an All-American at UK and former Kentucky player Guy Strong says Spivey is better than any center UK has had since then.

North Hardin safety Jordan Lovett is one of four Kentucky commits who will be playing in Friday’s Frederick Douglass-North Hardin season-opening game in Lexington.

Redshirt freshman JJ Weaver (13) could be ready to join Boogie Watson, left, and Jordan Wright as playmakers on the UK defense this year.

It’s hard to imagine there could a better marquee matchup to start a high school football season than Frederick Douglass-North Hardin this Friday in Lexington.

The game will feature four University of Kentucky commits — offensive lineman Jager Burton and receiver Dekel Crowdus of Douglas and North Hardin has running back La’Vell Wright and safety Jordan Lovett. All four are in the top eight rated players in Kentucky, including Burton at No. 1, in the 2021 recruiting class.

If that’s not enough, Douglass juniors Dane Key and Ty Bryant have Kentucky offers along with a lot of other offers. Sophomore tight end Thomas Howard, a Louisville baseball commit, and sophomore receiver/defensive back Isaiah Kenney also have UK offers.

The game got set after Douglass’ scheduled games with Dunbar on Friday and Henry Clay on Sept. 18 were both cancelled. North Hardin was supposed to play Tates Creek on Friday, but that game also got cancelled.

“I just got with (North Hardin) coach (Brent) Thompson and we decided to play,” Douglass coach Nathan McPeek said. “There certainly will be a lot of Division I talent and I know Big Blue Nation will be happy. I am sure (UK coach Mark) Stoops and his staff will try to get here. It should be a really exciting game.”

Thompson believes there’s been such a long period between the last high school sports in Kentucky that Friday’s game is the perfect way to put the spotlight back on high school athletics. He compares it to how college football has played premium games to open the season in recent years.

“To have a game of this magnitude for the state was a no-brainer for both of us coaches,” Thompson said. “I know we both would probably rather play this game at a different time in the season but for the kids we have this game is just a bonus for us both. With us both having two UK commits, there are going to be a lot of folks looking at this game.”

Douglass was Class 5A state runner-up in 2019 and North Hardin was a Class 6A semifinalist. While both teams lost players off last year’s team — including Douglass offensive lineman Walker Parks, a Clemson signee, and North Hardin defensive lineman Octavious Oxendine, a UK signee — both are expected to be state title contenders.

McKee is worried about Wright, who ran for 1,819 yards and 25 touchdowns in 13 games last year while averaging about seven yards per carry. He also had 34 catches for 553 yards and three more scores.

“That running back is one of the best I have seen on film,” McKee said. “His athleticism and speed are unreal. You better rally to the ball and tackle if you are going to get him to the ground. With less than three weeks of practice, tackling is probably not going to be great but it’s better than not playing.”

Thompson agrees that the 6-foot-0, 205-pound Wright is special.

“I would take No. 11 (Wright) for me any day of the week. I would not want to tackle him on any Friday, but I know short weeks (of practice) would be a concern,” Thompson said. “I have my own concern trying to catch players he has that run great routes. They have some really fast players.”

He calls Crowdus a “tremendous athlete” but is impressed by Key, too.

“I have seen him make several sensational catches,” Thompson said. “Burton has also been up there for top lineman in the state for two years. Heck, they went to the state championship game and got beat 14-7 by one of the better teams (Covington Catholic) in a game that could have gone either way.”

“We just want to give our kids a chance to play,” Thompson said. “It won’t be great football. We will both make mistakes. I hope we can make it look like a game. But it’s going to be fun for us and I am sure for fans, too.”

Lucas hopes he might be able to identify in different ways with players from what Payne did before his departure or current UK coaches still do.

“I think they’ve done a good job of building relationships with the players even with the age difference. I know that was a big thing just hearing how people talk about coach Payne and what he was really good at,” Lucas said.

“I feel like that’s something that I’m really good at. With me playing at a similar level — Kentucky is at a different level than a lot of places — but playing at a similar level, being highly recruited, being a McDonald’s All-American, understanding some of the pressures that come with that stuff, playing professionally, being in an NBA training camp, and growing up in NBA locker rooms and being around those experiences, it’s good perspective that I can give them of, ‘Hey, I know what you’re going through. I know what you’re thinking right now. Let this go. Let that go. Do this. Think about that.’

“I think that the bigger thing is that I’m still not too far removed from playing and being closer to where they were. I think that’s something that I have that I can bring to the program.”

If you are looking for two players who might make a bigger than expected contribution for Kentucky this year try defensive lineman Phil Hoskins and linebacker JJ Weaver.

Hoskins got a medical redshirt for a sixth year of eligibility and has been outstanding in preseason workouts.

“Phil Hoskins, I think he can have a really big year. He’s big. He’s twitchy. I know we talked about it last year, unfortunately we weren’t able to have it, but he’s come back with sort of a different mindset and it’s showing,” defensive coordinator Brad White said. “His work ethic on the field is unlike since I’ve been here.”

White credited new defensive line coach Anwar Stewart for not only inspiring Hoskins but doing the same for others in the defensive front.

“The pass rush right now, knock on wood, I don’t want to say the least of my worries. We’re hunting them pretty good on the outside,” White said.

Weaver was a recruiting plus for UK to get out of Louisville and despite worries he might de-commit he stayed with the Wildcats. White says he’s ready to take a big step forward this year after getting some game reps last year without having to burn a redshirt year because players could play in four games and not lose the year of eligibility.

“I think that rule is unbelievable for the development of young guys. He’s had a really solid camp,” White said. “He’s really done a great job in terms of shaping his body. He already had really good length, but his flexibility, his twitch is improved. His weight and his mass is improved.

“And his understanding of the game is improved and understanding that now it’s not just trying to execute the defense called, but how am I a football player within the play call? So he’s really started to take a step there. I’m really excited about the potential that he has in him and how much more there’s still to tap into.”

Just how good was former Kentucky center Bill Spivey, the first 7-footer to play at Kentucky and the national player of the year in 1951 when Kentucky won the national championship (he had 22 points, 19 rebounds in the title game)?

Spivey didn’t get to play at UK again. He was injured the first half of the 1951-52 season and then sat out the second half of the season after being implicated in a point-shaving scandal. Spivey always denied the charge but UK banned him from playing. He was indicted on perjury charges after testifying before a grand jury in New York but was not convicted even though the NBA banned him from playing.

One of his teammates at Kentucky was Guy Strong, who later became head coach at Kentucky Wesleyan, Eastern Kentucky and Oklahoma State.

“The centers that have been there (UK) since then, he would have knocked their dipstick in the mud. He was tough,” Strong said.

Strong — who had to attend the same tryout to make the UK team that Spivey down — still remembers scoring 14 points as a sophomore in Madison Square Garden before spraining his ankle.

“We played St. John’s there every year. Coach (Adolph) Rupp wanted to be in the Garden, which was the mecca of college basketball,” Strong said. “But it was in that area where the fixers operated.”

Strong eventually left Kentucky after the national title season when he seldom played and served in the Korean War before playing his final season at Eastern Kentucky. However, he remained friends with Spivey.

“We traveled in one car to games and played about 15 games,” Strong said.

One game was in Williamsburg and Strong assumed it would be against a local team. Instead, NBA players Jack Coleman and Arnie Risen were on the other team. Coleman played at Louisville and then played for the Rochester Royals and the St. Louis Hawks in the NBA from 1949-57. He had 6,721 points and 5,186 rebounds in his career and played in the NBA Finals three times. Risen was in the NBA for 10 years and scored 7,633 points. He won two NBA championships.

“We beat them by about 12 points I think. That’s how good Spivey was,” Strong said. “Risen came in and said, ‘Damn Spivey, if not for that point shaving not letting you play in the NBA you would have been a shot in the arm for the whole league.’ He was never indicted and never played in the NBA. If he had, everyone would still know his name.”