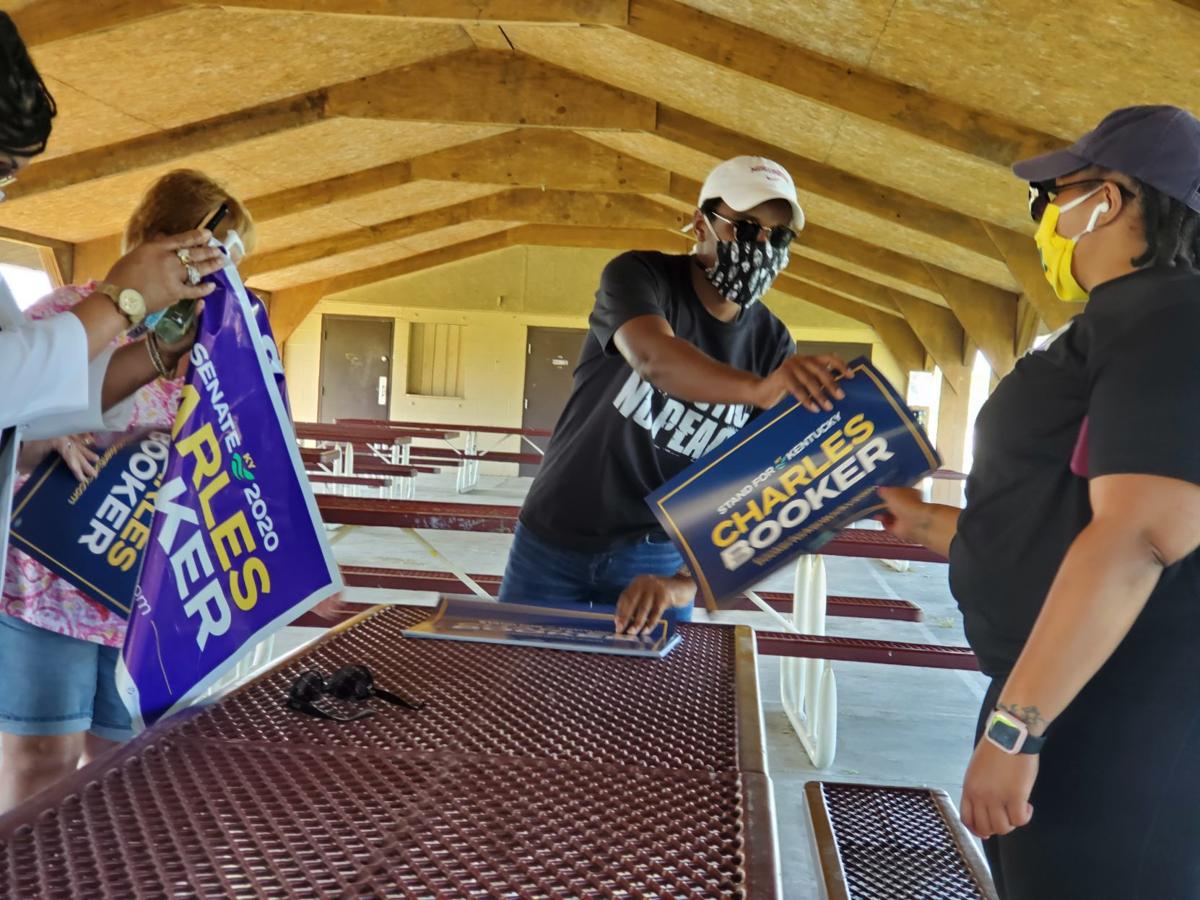 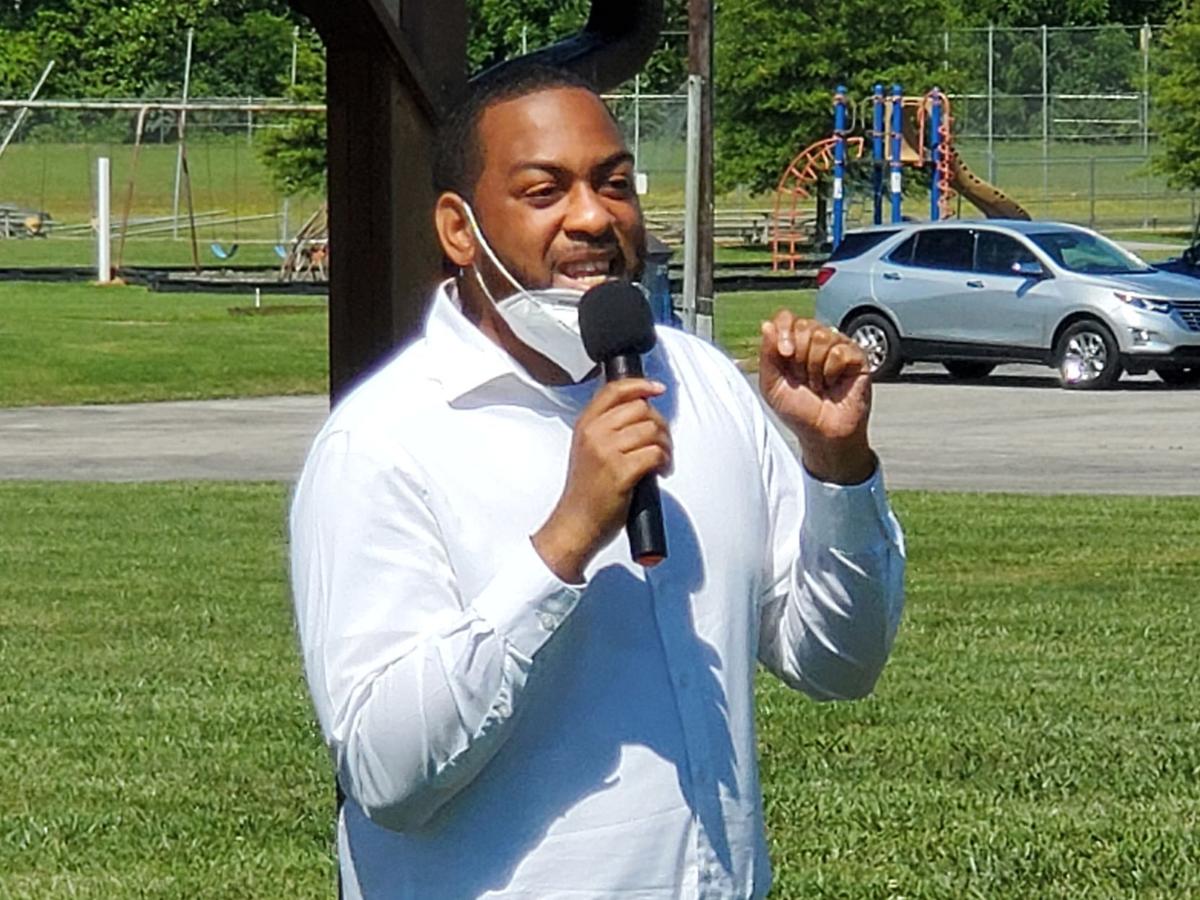 Rep. Charles Booker tells the crowd, “I just believe with every part of my being that this is our moment to win.” 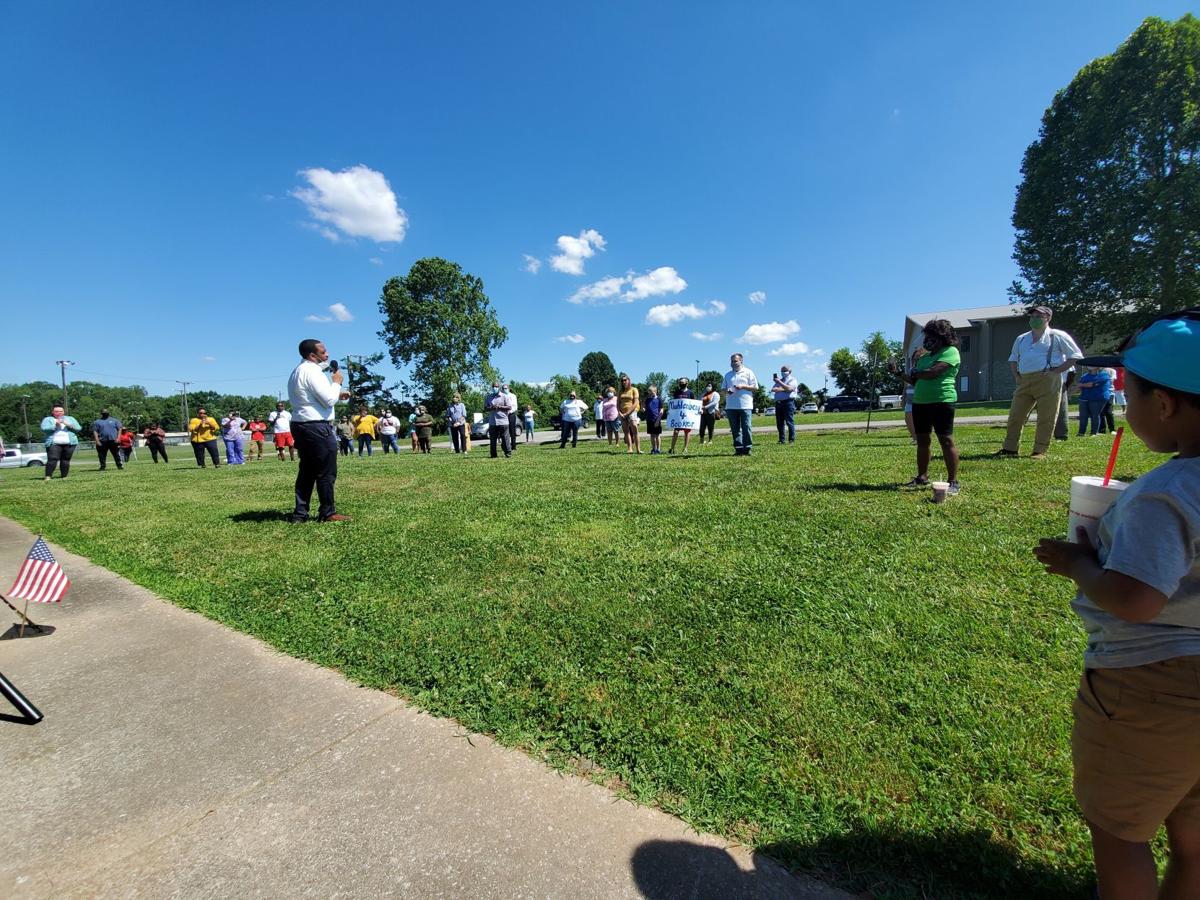 A crowd of people listen to Rep. Charles Booker at Ruff Park on Monday, where Booker reiterated his platform for his run for U.S. Senate. Booker must defeat a slate of Democrats in the primary election June 23 before facing off with Majority Leader Mitch McConnell in the November general election.

Rep. Charles Booker tells the crowd, “I just believe with every part of my being that this is our moment to win.”

A crowd of people listen to Rep. Charles Booker at Ruff Park on Monday, where Booker reiterated his platform for his run for U.S. Senate. Booker must defeat a slate of Democrats in the primary election June 23 before facing off with Majority Leader Mitch McConnell in the November general election.

State Rep. Charles Booker showed up in Hopkinsville one last time before next Tuesday’s primary election to rally up supporters for his bid at the U.S. Senate and unseating Majority Leader Mitch McConnell.

“We’ve got some mountains that we need to move, and one of them is Mount McConnell,” Booker said Monday to a crowd of nearly 50 people wearing masks near the Herb Hays Pavilion at Ruff Park. “If we stand together and believe, we will do just that.”

Booker, 35, is one of several names on the Democratic ballot for the U.S. Senate seat. His platform includes Medicare for all, economic justice and a Green New Deal to create jobs for Kentuckians. He also wants to host training for citizen lobbyists.

Along with touching on his goal to get 79-year-old McConnell out of office, Booker talked about the change that’s coming from Black Lives Matter protests happening across the country.

Specifically in Louisville — where Booker grew up on the West End — no-knock warrants were banned June 11, following the death of Breonna Taylor who was shot and killed by police who used a no-knock warrant to enter her residence.

“I just know that we are a part of something special, something trans-formative, something incredible, and we can’t miss this,” he said. “We cannot let this go by and just go back to whatever normal was.”

Booker also talked about George Floyd, who was killed May 25 by a police officer who dug his knee into Floyd’s neck during an arrest in Minneapolis, Minnesota.

“We are dealing with difficult, dangerous, devastating times, that if we don’t stand up and act, this stuff will continue,” the state representative said. “It’s still happening right now, and and as much as hate is resilient, so are we. Racism keeps showing up; we will too. I just believe with every part of my being that this is our moment to win.”

With his fist in the air, Booker said, “No lives matter until black lives matter,” as the crowd of black and white residents clapped and cheered.

Booker, who lives with diabetes, said health care should be a human right and that’s why Medicare for all is part of his platform.

After his speech, Hopkinsville resident Frances Dunbar thanked Booker for sharing the story of his mother not being able to afford to buy his insulin at times when he was growing up.

“I too am a diabetic,” Dunbar said, “and my medicine costs me about five-something a month, and there are some months where I can’t get it. I’m a registered nurse, and I never thought the day would come where I would have to worry about those issues, so I’m glad you brought those things up.”

Booker said if elected to the U.S. Senate this fall, he will continue to invest in Kentuckians.

“When you invest in people — and not big corporations that Mitch has sold out to — we will create, we will build the economy, we will do the things that make dollars circulate in our community,” he said. “You don’t build a tree from the top down. You need to invest in the roots.”

The primary election is June 23 and voting will be at the James E. Bruce Convention Center. To vote early and in-person, visit the Christian County Clerk’s Office between 8 a.m. and 4 p.m. Monday through Friday, as well as this upcoming Saturday.

For more information about the election, visit govoteky.com.