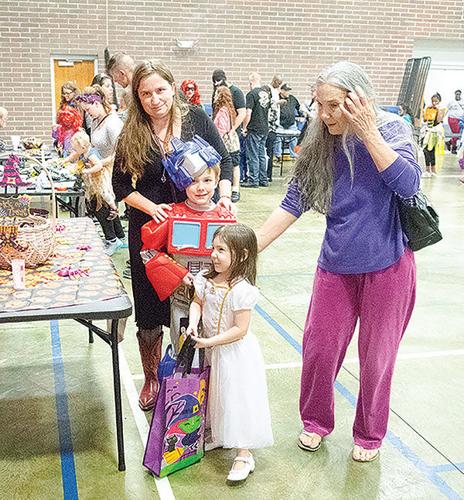 About a thousand people, many young trick-or-treaters, including Optimus Prime, came out for Oak Grove Community Center’s inaugural trunk-or-treat Oct. 31. The event was moved indoors due to possible weather concerns. 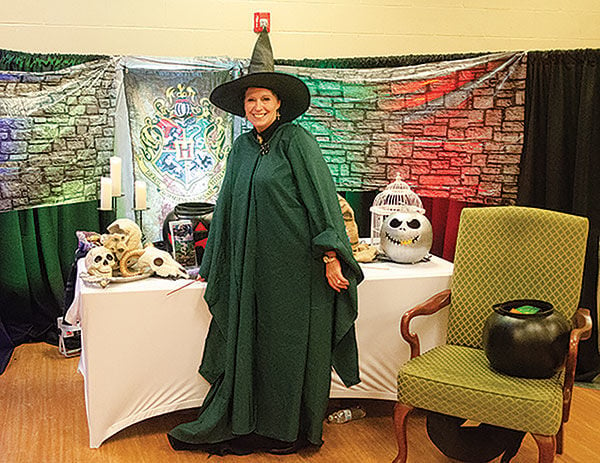 Oak Grove Tourism Executive Director and witch Traci Cunningham poses for a photo in front of her trunk-or-treat display  Wednesday. Tourism and the community center hosted a “trunk off” to see whose display was the best based off votes from attendees. There is no word on who won, though there were certainly rumblings of cheating at the ballot box.

About a thousand people, many young trick-or-treaters, including Optimus Prime, came out for Oak Grove Community Center’s inaugural trunk-or-treat Oct. 31. The event was moved indoors due to possible weather concerns.

Oak Grove Tourism Executive Director and witch Traci Cunningham poses for a photo in front of her trunk-or-treat display  Wednesday. Tourism and the community center hosted a “trunk off” to see whose display was the best based off votes from attendees. There is no word on who won, though there were certainly rumblings of cheating at the ballot box.

As the sun set Oct. 31 — Halloween night — hundreds of superheroes, witches and monsters lined up with their families outside the Oak Grove Community Center to fill their candy sacks while trunk-or-treating.

Melissa Lynch, the center’s director, said she was shocked by how many people attended the inaugural event.

“Families were lined up at the front door, through the parking lot, down the sidewalk and on the sidewalk in front of the building too,” Lynch said. “I was ecstatic we had so many people come out to participate. It was a wonderful event.”

About 40 booths were set up for the event — in the parking lot and inside the center. Volunteers from the community hosted some booths, while others were sponsored by local organizations such as the Oak Grove Tourism Commission, Valor Hall and masonic lodges.

It took a few months for the center’s staff to plan the spooky event, Lynch said.

“I wanted to do something that was safe for the community,” she said. “I wanted the center to be one central location where the kids could come out and get the same effect as trick-or-treating, but in a safe environment.”

When the clock struck 6 p.m., Lynch opened the center’s doors and children flooded into the facility. Many trick-or-treaters giddily approached a woman wearing dark green witch’s robes and a pointy hat to ask for candy. The witchy woman – Traci Cunningham, executive director of the Oak Grove Tourism Commission – passed out sweets from a cauldron. Her booth was “Harry Potter” themed and decorated with a flag brazened with the Hogwarts School of Witchcraft and Wizardry crest.

Other children ventured toward a booth ran by a trio of pirates who dared little ones to “walk the plank” for their goodies. Their booth overflowed with skull decorations and a treasure chest.

Among other booths in the gym stood a gypsy’s tent draped in fabrics. Inside the tent, Justine Alberty, community member, hovered her hands over a crystal ball, prepared to tell trunk-or-treaters their fortune.

Alberty compiled her fortune-teller costume from items she dug out of her closet. With a few golden bangles, extra jewelry and a fiery red wig, the look was complete.

Alberty’s mother, Christine Elledge, dressed as a traditional witch to give the event-goers a fright. From the gypsy’s tent, their booth extended to include a cauldron overflowing with treats, a life-sized skeleton and other Halloween-themed decorations.

The mother-daughter team worked together to bring the spooky scene to life because they wanted the children to have a good time, Alberty said.

“It was so much fun getting to see all the kids dressed up,” she said. “We just really love Halloween. It’s a fun holiday. It’s not about buying presents or getting a bunch of stuff … it’s about being creative. We had a blast being a part of this.”

Alberty and Elledge agreed they are already looking forward to next year’s Halloween.

Dustin, 4, zoomed around the gym in his “Catboy” costume while his mother, Megan Kauffman, held onto his hand as they visited each booth.

This is the first year Dustin has participated in Halloween activities.

“This has been a big deal for him,” Kauffman said. “He loves his costume this year and won’t take it off.”

Kauffman said the center’s event was great for her because it was local and easy.

“I think it’s a really good idea to have something like this because a lot of families in our community have parents who both work,” Kauffman said. “By doing it this way, we were able to come to one place and get our trick-or-treating done. Plus the kids are all still enjoying themselves.”

“I wanted to be a witch for Halloween because witches are really spooky,” Mia said.

Mia was especially excited to get Almond Joys while trunk-or-treating because they are one of her favorite candies.

Dennis Cunningham, Oak Grove Police Department’s chief of police, said he was shocked by the event’s turnout, but pleased with the community’s engagement.

“Events like this do wonders for the community,” Cunningham said. “It’s great for the kids and as a chief of police, that’s my main concern – the kids. If we can put a smile on a kid’s face, we’ve done our job. From what I’ve seen tonight … the kids have just had a wonderful time.”

Cunningham said he is grateful for all of the volunteers who worked with the center’s staff to make the event a success.

“We definitely appreciate the time and effort [everyone] put in out here. It’s always appreciated and welcomed,” he said.

As the holiday season continues, the center will host several events for the community, which supports the center’s fundamental mission.

“Our mission at the Oak Grove Community Center is to service as many of the community members and residents that we can,” Lynch said. “The center is a place of fun and knowledge. It’s a safe place for lots of different activities.”

A tree lighting ceremony will be held at 6:30 p.m. Nov. 30 at the Oak Grove Community Center, 1705 Thompsonville Lane. Santa Claus will visit the center Dec. 14 to read “The Night Before Christmas” to children while enjoying cookies and milk.