A group of local World War I veterans chat with Winski (center) after the breakfast. The veterans were recognized with a standing ovation from the crowd. 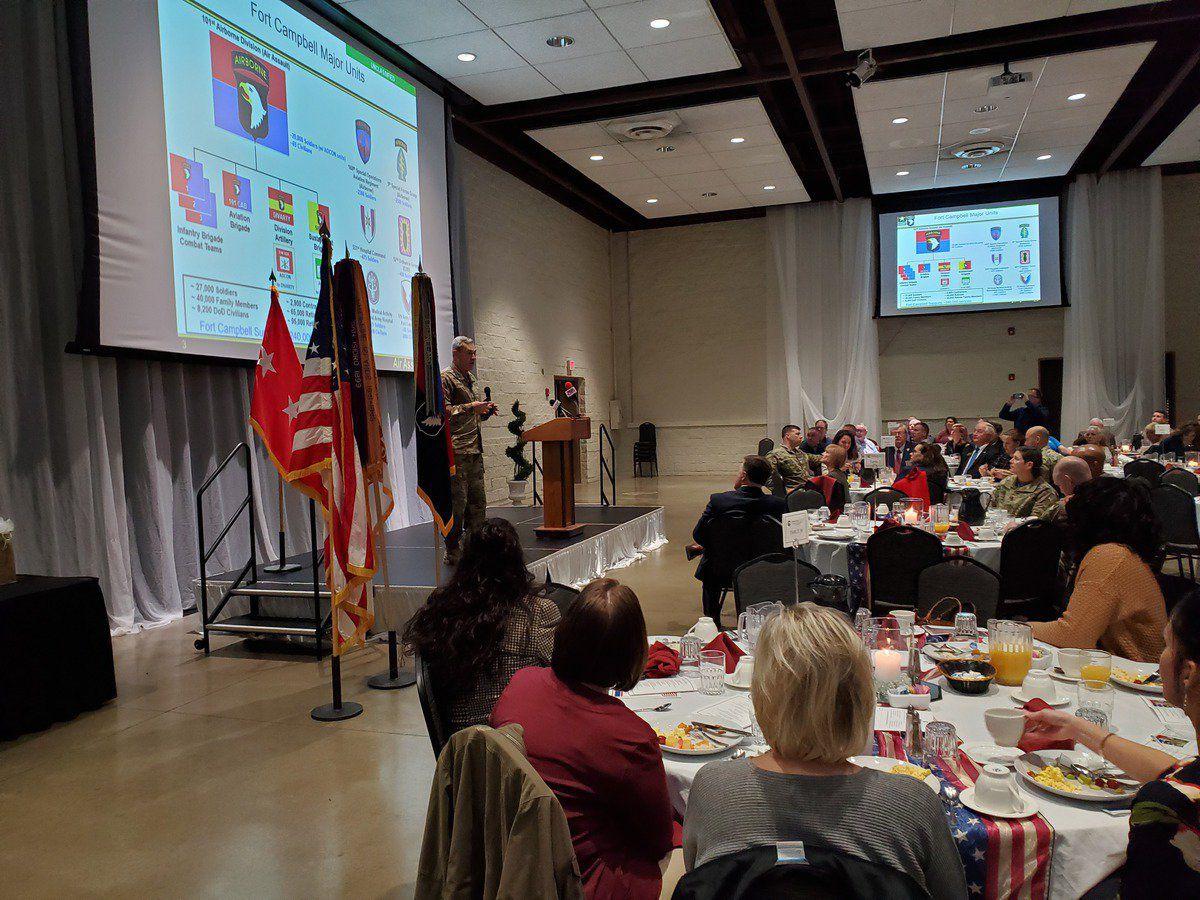 A group of local World War I veterans chat with Winski (center) after the breakfast. The veterans were recognized with a standing ovation from the crowd.

A host of officials from Fort Campbell and Hopkinsville met Wednesday morning at the Christian County Chamber of Commerce's Eagle Ambassador Breakfast at the James E. Bruce Convention Center.

After recognizing a crew of World War II veterans in the crowd, Maj. Gen. Brian Winski, commanding general of the 101st Airborne Division and Fort Campbell, shared some updates about the Army installation and some infrastructural needs they are focusing on in the coming years.

"As you know, we lost one of our two aviation brigades years ago, but we're going to start regrowing some of that capacity," he said, as the crowd clapped. "It's on the way right now, but it will be in a really good stride come this summer."

According to New Era archives, the 159th Combat Aviation Brigade was inactivated in May 2015 due to a five-year Army Aviation restructuring plan. The 101st CAB remained active.

Along with the welcomed regrowth, Winski shared that there are some needs at Fort Campbell pertaining to infrastructure.

"You all are influencers and have the ear of a lot of folks that make resource decisions and priorities," he said. "I just want to share with you what we've been highlighting to the senior Army leadership in terms of where we need some help."

Winski noted that most of the barracks at Fort Campbell are about 15 years old, but some have been around for 40-plus years. For that reason, Fort Campbell is asking the, Army for $52 million to renovate the 1st Brigade Combat Team barracks in Fiscal Year 2020.

"The way they're engineered and the HVAC systems, we just need to put some money into them to get them up a little closer to the room amenities we have in our modern barracks," he said.

As far as privatized housing at Fort Campbell, Winski explained that there are about 4,500 homes on post, and nearly 40% of them are "new," or five to 15 years old. Over 2,500 homes are considered "legacy" housing, which was built between the 1960s and '80s.

The current agreement with the Army's Residential Communities Initiative will replace 760 more homes by the year 2053, and an estimated 1,800 homes will be over 90 years old by then, he noted.

"(The legacy homes) have kind of lived their lives, and what we really want to do is accelerate like we did (with the new homes) and build some homes that are going to last well, well into the future," Winski said.

About 50 homes will be going up in the next year for junior enlisted soldiers, he said, noting "We're proud of that, but never satisfied."

Winski said there is also a need for modern motor pools.

"They were engineered in the '50s and '60s when the equipment for the Army was Jeeps and trucks, but the stuff right now is much larger," he said. "We're not able to use some of these facilities because they can't get into the bays ..."

He asked elected officials specifically to not let the project for the Army Field Support Battalion Consolidated Maintenance Facility get pushed for other priorities. The project is slated for FY2020 and will update 31 buildings across Fort Campbell, many built pre-1967 in the WWII era, the presentation stated.

"We've really got to get our workforce out of these things and into the new complex that's going to go up on the southend of post," he said.

He addressed the Mahaffey Middle School renovation project that was deferred. Winski said the faculty and the leadership at the school is "in the green," however, the building is not up to par.

"We want to rebuild the middle school with greater capacity and plenty of room for the students," he said. "The time has come to do something else with the building that was Mahaffey. It's got to happen next year -- that's our stance on that."

In closing, Winski thanked the community for its continuous support the soldiers and their families at Fort Campbell.

"I've been all over the Army, and it's substantially different here, for the better, and I'm thankful," he said.

Military Affairs Committee Chair Lana Bastin gave out three awards at the breakfast to those who exemplify what it means to be Eagle Ambassadors. Nicole Whitt received the Eager Eagle Award, David Jones was named Outstanding MAC Member and the MAC Service Award went to The Rogers Group.

Christian County Chamber of Commerce President Kelli Pendleton said the MAC program is currently reevaluating its resources and effectiveness to better serve the soldiers and their families.

"We are fortunate to be the home of the Army's premier destination," Pendleton said. "I'm excited to share all of those changes with you soon."