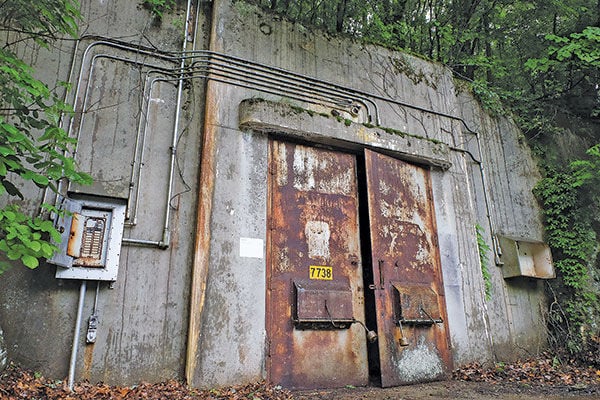 Building 7738, one of many structures built into the hills in the Fort Campbell wildnerness, is one of the few that remains open as a reminder to the area’s Cold War nuclear past. 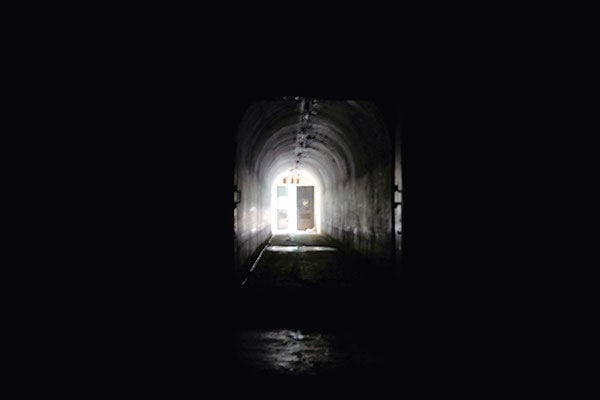 The underground structures of the Bird Cage used to be wired for electricity, but many of them now sit in the dark. 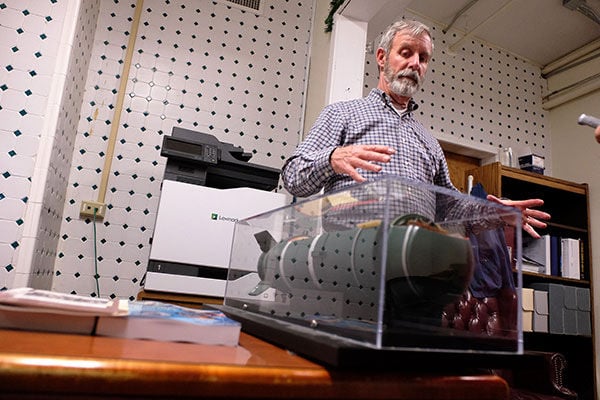 Post Historian John O’Brien gestures as he looks at a model of the nuclear bomb once stored at Fort Campbell. He said his model was once confiscated by the Army, possibly due to the secrecy surrounding the project, but it was eventually returned. 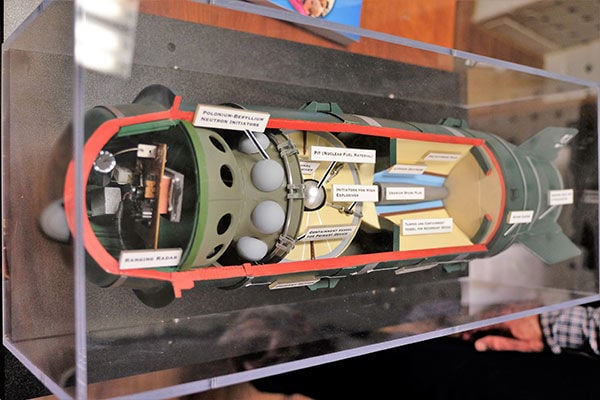 The model has named parts for next to each component of the bomb to explain what it was used for.

Building 7738, one of many structures built into the hills in the Fort Campbell wildnerness, is one of the few that remains open as a reminder to the area’s Cold War nuclear past.

The underground structures of the Bird Cage used to be wired for electricity, but many of them now sit in the dark.

Post Historian John O’Brien gestures as he looks at a model of the nuclear bomb once stored at Fort Campbell. He said his model was once confiscated by the Army, possibly due to the secrecy surrounding the project, but it was eventually returned.

The model has named parts for next to each component of the bomb to explain what it was used for.

Deep in the heart of Fort Campbell, where the green camouflage of the Army gives way to the more vibrant greens of nature, lies an abandoned relic that calls back to our country’s most paranoid days.

Locals call it the Bird Cage.

It was named for the fences and wires that once surrounded it. Constructed in 1948, it consists of more than three miles of Clarksville Base and the more than twenty underground concrete structures housed within its hillsides. The Air Force, which originally occupied it, called it Site No. 3.

At a time when Fort Knox was only a few years removed from its first shipments of gold, Site No. 3 housed an equally dangerous — if less well-known — secret: One-third of the country’s nuclear arsenal was stored there.

The fences, wires and radiation are long gone, the facilities have been shut down since 1965. Despite this, my photographer and I are still asked to wear Tyvek environmental suits when we arrive at the site. The open-faced suits would be useless against any kind of nuclear radiation, but our Public Affairs Officer tells us some of the underground structures have recently tested positive for White-nose syndrome.

Looking like discolored Teletubbies, we enter building No. 7738. The rusted door hangs slightly ajar. Surrounded by decades of natural growth, the decaying entrance looks all the world like an abandoned building encountered in a bad movie before some sort of supernatural monster appears to attack the protagonists. The inside doesn’t dispel that feeling. Even with the door slightly open to the outside, it only takes a few steps to be wholly engulfed in darkness. There is no electricity, though many of the structures were once wired for it, and you can’t see your hand even if you wave it in front of your face. At this point, my photographer flicked on her cellphone light and asked me to please stop talking. I was making her nervous.

At one point, about 600 people were assigned to buildings like this. From construction until 1952, it was run by an Air Force colonel and the pillboxes outside many of the structures housed armed Air Police. From 1952 until closure, a Navy captain commanded and Marines took up security.

At least five of these buildings were used to store radioactive materials. Given the lack of a pillbox outside, it’s a safe wager ours wasn’t one of them.

The late-1940s technology still represented the beginnings of the world’s understanding of nuclear weaponry, said Fort Campbell Post Historian John O’Brien. Gravel Gertie, the building where some nuclear testing went on, had a four-foot thick gravel roof. In the event of an accident inside, the gravel was supposed to contain the explosion from the resultant dirty bomb.

“That was 1948 nuclear technology,” O’Brien said. “There actually were two nuclear accidents associated with Clarksville Base.”

One was the killing of several dogs with gamma radiation in Oak Ridge, Tennessee. The bodies were passing through Clarksville in 55-gallon drums when the trucker, who O’Brien said had a girlfriend in the area, stopped near where Hooters stands today. The July heat got to the barrels, four of which exploded, sending irradiated dog bits through Clarksville. No one was injured, and Broken Arrow teams (Broken Arrow refers to an accident involving nuclear components that does not risk nuclear war) cleaned up the mess. The dogs are buried at Clarksville Base.

The other accident happened when a train carrying nuclear material derailed on the base. According to O’Brien, a report of the derailment went straight to the Senate, despite there being no real danger or damage.

“The thing about that period of time though was the KGB was very active in Clarksville, the FBI had an office in Clarksville … there was a whole very elaborate deception process of moving empty boxes around so that Soviets would see empty boxes going and ‘Does it have a weapon or doesn’t it? And where did it go? Did something return,’ and all of that.”

The spying may have ended in at least one fatality.

Three deaths were recorded on electric fences surrounding the Bird Cage, and one of them, according to O’Brien, was thought to be a KGB agent.

As more nuclear sites were built across the country, Site No. 3, which was later called Site Charlie, was asked to house less and less of the world-ending material. A total of 13 sites were built, most of which no longer exist, according to O’Brien.

“By 1965 most of our nuclear defense force were moved to Minuteman missile silos,” he said. “These 13 bases, between 1965 and 1969, were all decommissioned. These buildings (at Fort Campbell) are different than a lot of the places because Fort Campbell used them, and so they are preserved by use. Several of the 13 facilities, most of them, were not used, they were just allowed to atrophy, and then went away and they crumbled and they’re not there anymore.”

As we trudged through one of the last remaining vestiges of our country’s early Cold War nuclear ambitions, we saw no trace of recent use. While some of the facilities were repurposed – Gravel Gertie became a small arms repair depot and several above-ground structures were used by Task Force 160 – others were used for unit storage or not at all. The walls in our structure were stark and the emptiness provided even our lightest footfalls with echoes.

That emptiness is no accident. After falling out of use for Army storage, some enterprising soldiers allegedly decided the structures would serve best to house the junk they no longer wanted. Because of the dumping, many of the “bunkers” are now welded or padlocked shut, despite several being on a free tour with metal placards describing their former use sitting just outside.

The secrecy wasn’t always superficial.  Before 1965, even its guards weren’t told what they were guarding. These practices lent themselves to a handful of conspiracy theories and misconceptions.

“People think alien body parts from Area 51 are stored out there,” O’Brien said. “One person told me a story about one of the bunkers having a Navy attack submarine in it.”

Each of these tall-tales carries a grain of truth, O’Brien said. There’s not an attack submarine, but there was a bunker where a particular type of torpedo fired from an attack submarine was stored. There were no UFOs coming and going, but the division used to have a lot more helicopters when it returned from Vietnam and many of them landed in a flat section of land at Clarksville Base.

We certainly saw no secrets on our tour. After walking through the pitch-black with our cellphone lights, we came to the end of a tunnel that opened into a dome-shaped room. What big secret did we find inside? Nothing. It was empty, like many of the others.

O’Brien has vague notions of housing a museum in some of them, but said condensation made it difficult. For many of the underground structures, there doesn’t appear to be a plan.

“It’s very difficult to see any long-term future,” he said, adding that the structures simply do not serve much use.

Tours are available to see some of the sights, and maps are available from the Dreyer Field House on post. Without plans for many of the facilities, it’s unclear how long they will remain usable or open to the public.

“The point is, it’s open, come and see it,” O’Brien said. “Pack a picnic lunch and come and drive around.”

JESSE JONES is the editor of The Eagle Post. Reach him at 270-887-3239 or jjones@kentuckynewera.com.