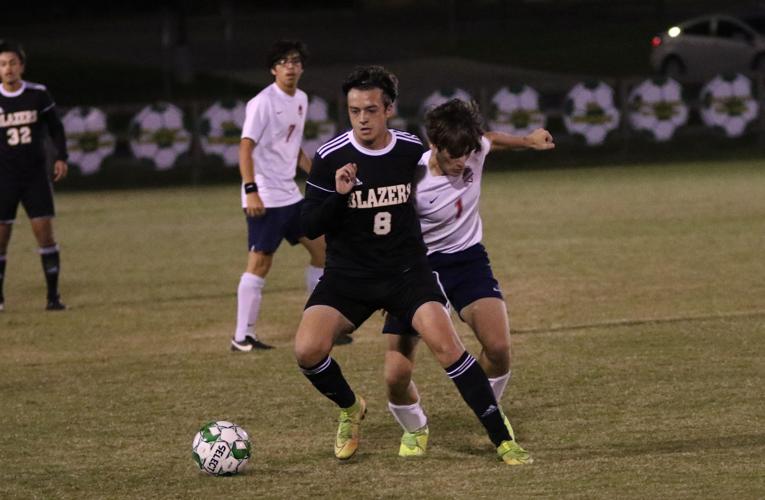 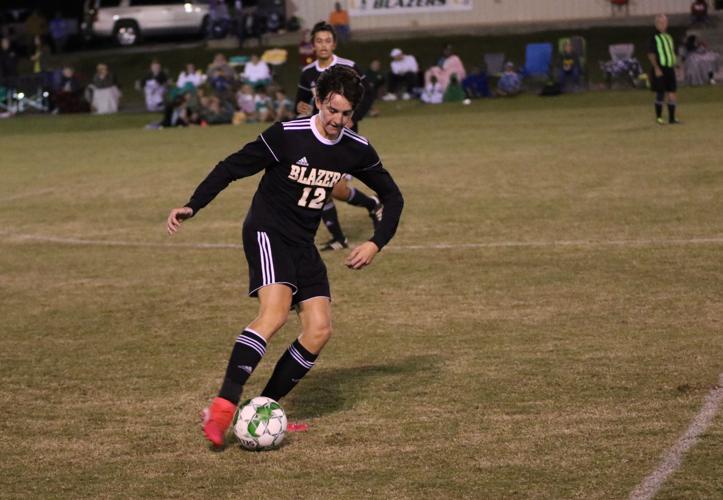 Bryan Edwards | Kentucky New Era University Heights Academy’s Will Hancock makes a touch on the ball in the Blazers’ 5-0 win on Tuesday night.

Bryan Edwards | Kentucky New Era University Heights Academy’s Will Hancock makes a touch on the ball in the Blazers’ 5-0 win on Tuesday night.

With Thursday’s All “A” semi-state round against Murray looming, it could’ve been easy for the University Heights Academy Blazers to look over the Hopkins County Central Storm and let their opponents sneak up on them.

That wasn’t the case, as Will Bryan tallied a hat trick and Connor Dill recorded three assists in UHA’s 5-0 win over Hopkins Central at Givens Field.

Blazers’ head coach Frankie Thomas said he wanted to make sure his guys didn’t pack it in and let the Storm brew an upset on Tuesday night. He said he felt his team continued to play well after playing just 24 hours after playing Monday.

“I just wanted us to continue to communicate with each other and for my defense to communicate with each other and make good passes,” he said. “And for us to stay wide and play the ball, cross the ball and switch the field as much as we possibly could. They’ve done a phenomenal job of that. I think we’ve possessed the ball 85 or 90%% of the time both (Monday) and (Tuesday).”

Bryan opened the scoring on a 20-yard free kick, then found his second goal on a pass from Connor Dill. The second goal from Bryan was his 20th of the season.

Preston Thomas found the back of the net twice in the second half, and Bryan finished the night off with the hat trick in the final minutes to walk out with another shutout win.

Thomas said they have been forced to try some different things offensively due to the amount of defensive attention Bryan gets in the offensive third, but that it has been good to see others step up and put the ball in the goal when Bryan can’t get any free space.

“We’ve been having some different defenses thrown at us because of the attention Will gets when he has the ball,” Thomas said. “The good thing is we’ve had several players, like Preston and Connor and some other players put the ball in the back of the net.”

Next up is Thursday’s big matchup, which will be UHA’s third game in four days.

Thomas said the big key is getting rested and recovered before taking the field in the biggest game of the year to date.

“The big thing right now is rest,” Thomas said. “We’re going to rest the remainder of the night and take off (Wednesday). Just relax and drink plenty of fluids and eat some good food. Just make sure we stay focused and get ready for Thursday.”

Murray and UHA will kickoff at 7 p.m. Thursday in Murray.