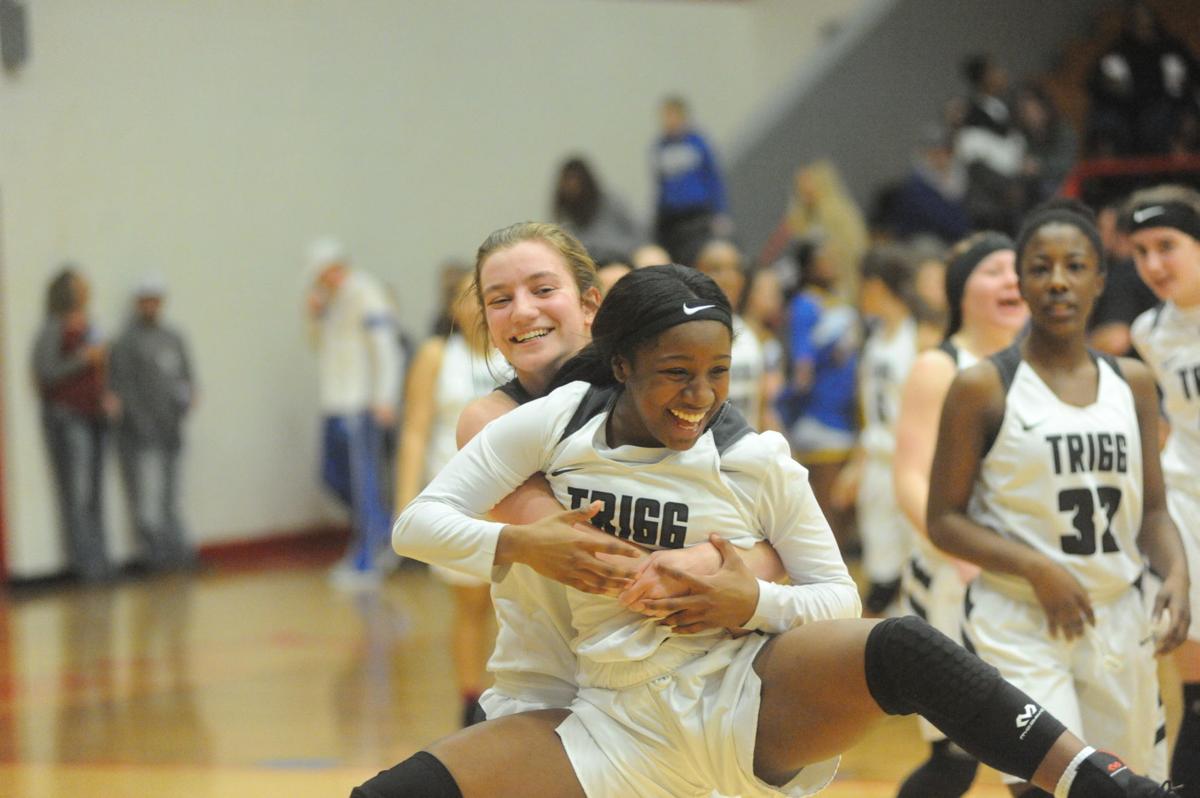 Trigg County’s Rylee Bush (left) picks up teammate Iyanna Grubbs after the Lady Wildcats’ win over Caldwell County in the first round of the Second Region Tournament March 3 at Christian County. 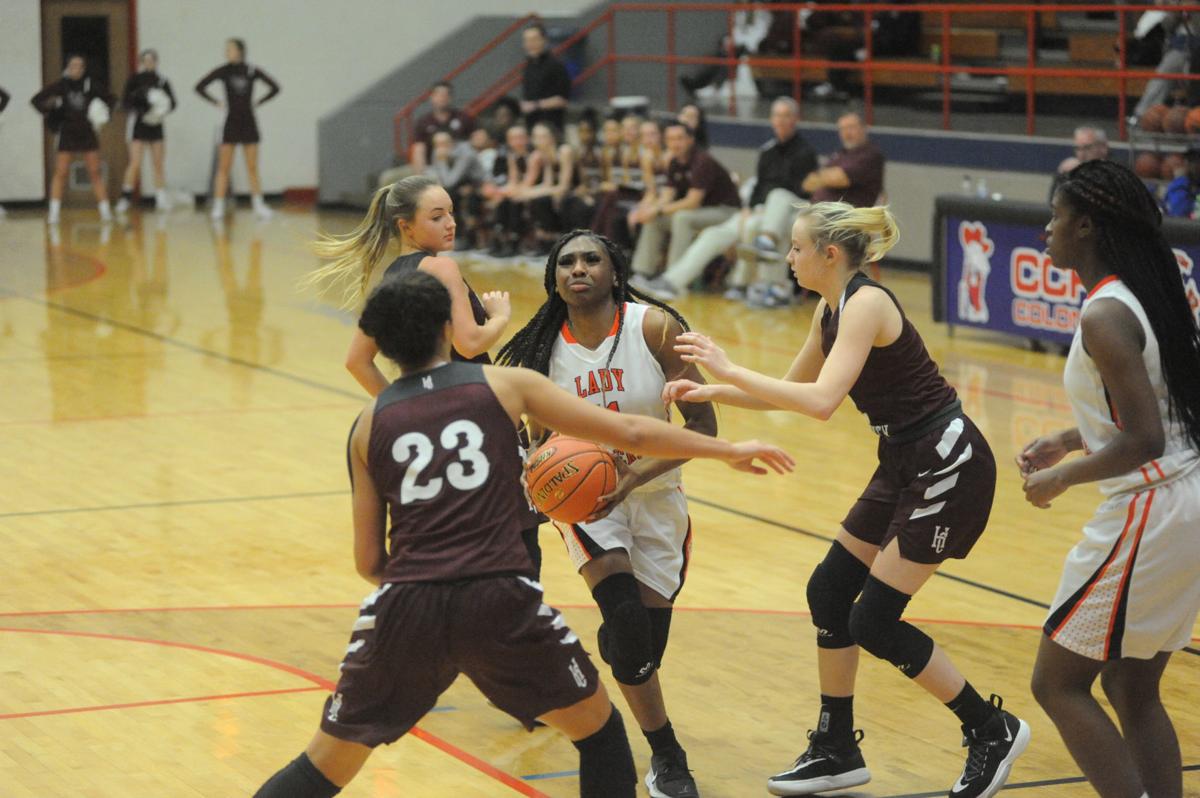 Hopkinsville’s Lakayla Samuel goes through a trip of Henderson County defenders during the Lady Tigers’ loss Tuesday at CCHS. 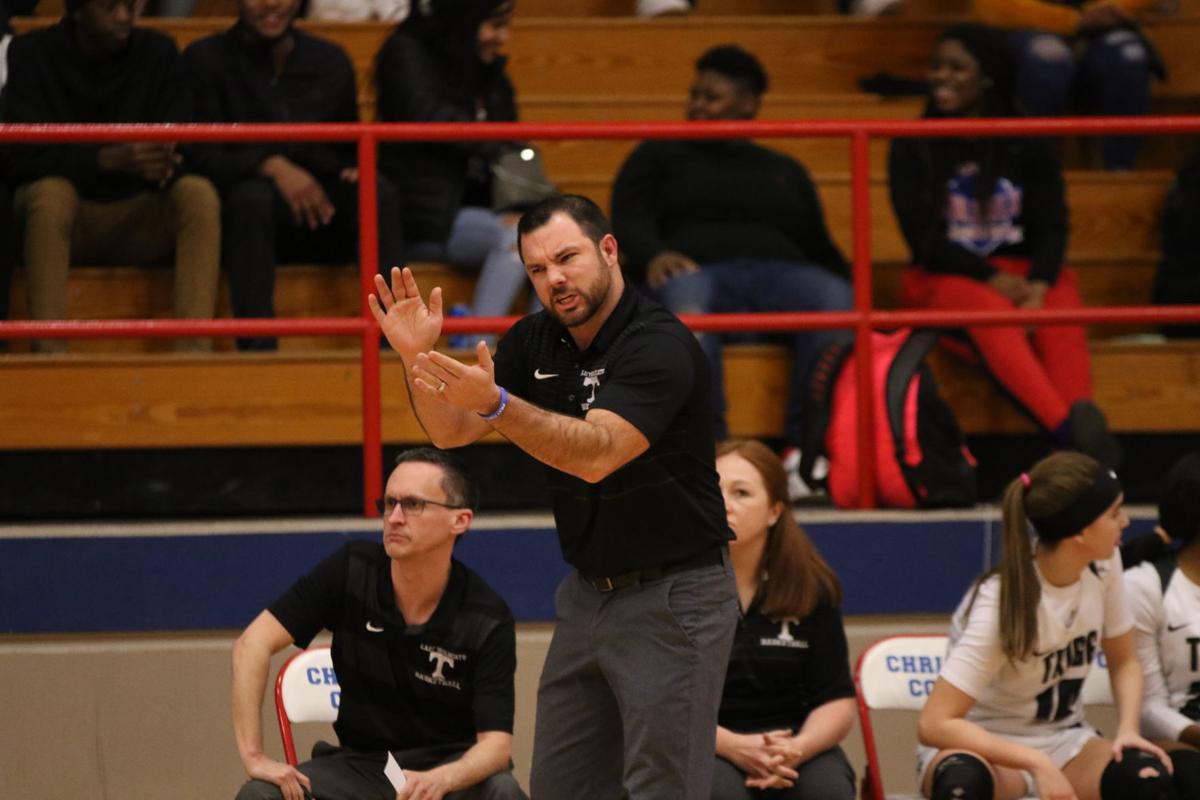 Trigg County’s Rylee Bush (left) picks up teammate Iyanna Grubbs after the Lady Wildcats’ win over Caldwell County in the first round of the Second Region Tournament March 3 at Christian County.

Hopkinsville’s Lakayla Samuel goes through a trip of Henderson County defenders during the Lady Tigers’ loss Tuesday at CCHS.

Tuesday was filled with ups and downs for local teams as the Trigg County Lady Wildcats made history against Caldwell County, and the Hopkinsville Lady Tigers suffered a tough defeat at the hands of the Henderson County Lady Colonels.

Trigg advances in Second Region tourney for first time since 1990

Coble and his bunch made history Tuesday night, as Trigg defeated Caldwell County 54-50 in the opening round of the Second Region Tournament, advancing in the tournament for the first time in 30 years. The victory added to what has already been a historic season for the Lady Wildcats.

Coble said he thinks about his senior class after all they’ve been through leading up to the win.

“They started off in this program and we win six games our first year,” Coble said. “They just faced adversity and (have) resiliency, and you can see that in how they play now. Just for us to accomplish this (Tuesday night) with that group I think means the most. I woke up (Tuesday) morning and I said, ‘I really don’t feel like this is the end. It doesn’t feel like this is the last day,’ and I don’t think my players had that feeling — — I think we always expected to keep moving on. With that in mind, it was just really great to keep playing and keep making history at Trigg County.”

Coming into Tuesday night’s game, Coble said he didn’t want to put too much pressure on his team and wanted to see them have fun because they have already made history regardless of the result.

“I think there’s a fine line that every coach has where you don’t want them to feel the pressure or have the jitters coming out because it’s such a big game,” he said. “I told them, ‘Look, you’ve accomplished more than anybody thought and you win back-to-back district championships. This is icing right here. Now you get to go out and play with your teammates and try to make history. There’s no reason to be tight. If we play the game that we can play, then we’re going to be fine.’ The girls came out and executed the game plan like they always do and just a phenomenal job on their part.”

But the Lady Wildcats weren’t ready for this season to end. Trigg gave the ball to freshman guard Olivia Noffsinger and let her go to work early. She scored 11 points in the first quarter, helping the Lady Wildcats lead the Lady Tigers 16-13 after eight minutes.

Caldwell never went away and kept it close the entire way. The Lady Tigers got close but could never get over the hump and get ahead of Trigg.

Coble said the Lady Tigers kept it close, but the way his team shot the ball, as well as picked the shots it was going to take, was huge for the Lady Wildcats to get the win.

“Give it to Caldwell — we thought we were going to stretch it to double digits, and they hit two three-pointers in a row, one in our faces on a stepback,” Coble said. “Just shot selection. We come out and we want to play up-tempo, and we thought we could wear them down. But with that tempo it causes poor shot selection.

“I thought in the first half we took some shots that we necessarily didn’t have to,” he continued. “In the second half, we shot 50% from the field — 8-for-16. If we shoot 50% from the field, we’re doing something right because if you’ve seen our season average, it’s nowhere near that. Just overall, our kids adapted and played the game like I know we could.”

When the Lady Wildcats needed the team to hit free throws late, it was the freshman Noffsinger again that stepped up and knocked them down to seal the win.

Noffsinger finished with a game-high 21 points, and Coble said he knew she was going to be a big piece for his team now and in the future.

“It’s funny because by the time it’s all said and done me and her are going to be together for seven years and it’s just a long time to be with somebody,” Coble said. “All season we knew that she was going to step up and she did. District tournament she comes out and averages 18 points and comes out (Tuesday night) and scores 21 points as a freshman. If she’s not on the top-10 region radar next year, then someone needs to rethink that. She’s just a phenomenal ball-handler (and) passer, and she’s just unselfish.”

Trigg set its game plan and prepped for the Lady Tigers, but a slight change on game day was made, and it paid off. Coble said they wanted to take away Jacey Jaggers on defense, and the plan worked well, as Jaggers only scored four points for Caldwell.

“My assistant mentioned it. Maybe we put Iyanna (Grubbs) and Emily (Noffsinger) on (Jacey) Jaggers and try and wear her down, and then we’ll switch Rylee (Bush) on Lucy (Goffinet), who’s our better help defender and it paid off,” Coble said. “Jaggers had four points and ran her ragged all over the floor. We knew in order to win this game we were going to have to take somebody away and that was the person that we picked. I can’t speak highly enough of Iyanna and Emily because Jaggers is an all-region player and she’s freaking good so just to see them do that is great.”

Trigg County will try to clinch a berth in the Second Region Championship at 7:30 p.m. Friday when it faces Henderson County.

Tigers fall to Henderson in first round

The Hopkinsville Tigers got arguably the toughest draw of all the Second Region teams, as it was tasked with stopping Emilee Hope and the Henderson County Lady Colonels.

Hope got into foul trouble early, but it was the Henderson County bench and point guard Sadie Wurth that did the work as Henderson defeated Hopkinsville 71-23 Tuesday night.

Henderson County head coach Jeff Haile said his bench did a good job of coming in and contributing as his team dealt with foul trouble.

“Unfortunately we go into some foul trouble, but fortunately we were able to use our bench and I thought our bench did a great job coming in and taking up the slack and scoring for us in there,” Haile said. “Sadie did a good job of running the show out there with (Kaytlan) Kemp out there too … They all did a great job coming off the bench and contributing.

“Sometimes you put kids in the game, and they kind of go out there nervous and they don’t get much done, but these kids got something done,” Haile continued. “They either scored or defended or rebounded and that’s what you’ve got to have.”

“They spread the floor. They can shoot the ball,” Babb said. “We had the best rebounding team because we played that zone and we got good rebounds. But when we spread it out, and I knew going in it was going to be a difficult challenge and I had faith in my girls, but they shot the ball well and they move without the ball well. They got a good ball club.”

Henderson jumped out early. After giving up the opening basket, the Lady Colonels outscored Hopkinsville 22-5 in the rest of the period and never looked back.

Coming out of the halftime break with a 49-15 lead, Henderson’s Emilee Hope buried a three-pointer to start the running clock and let the time run out from there.

Babb said the loss will sting, but with a majority of his production returning, he hopes they come back ready for next season.

“This one is going to hurt for a while,” Babb said. “You tell them to keep their head up. You let them know how hard they work during the season. You thank them. Basketball is a long season.”

Babb said being in the region tournament is a big deal, but he wants his team to get even further in the future.

“Being here was a blessing,” Babb said. “In my five years of being here, we didn’t make it here every time, but we got to get over the hump. I think we represent the school well with what we try to accomplish. We just got to give more.”

Henderson will face Trigg County in the Second Region semifinals Friday. Haile said he was impressed with the Lady Wildcats and what they did Tuesday night.

“They do a good job on both ends of the floor,” Haile said. “I was impressed with their defense, I was impressed with the way they cleared out for their offensive players trying to get to the basket. They’ll try to draw fouls on you, they’re aggressive and they play hard. Teams like that are scary and we’ve got to come out and match their intensity.”