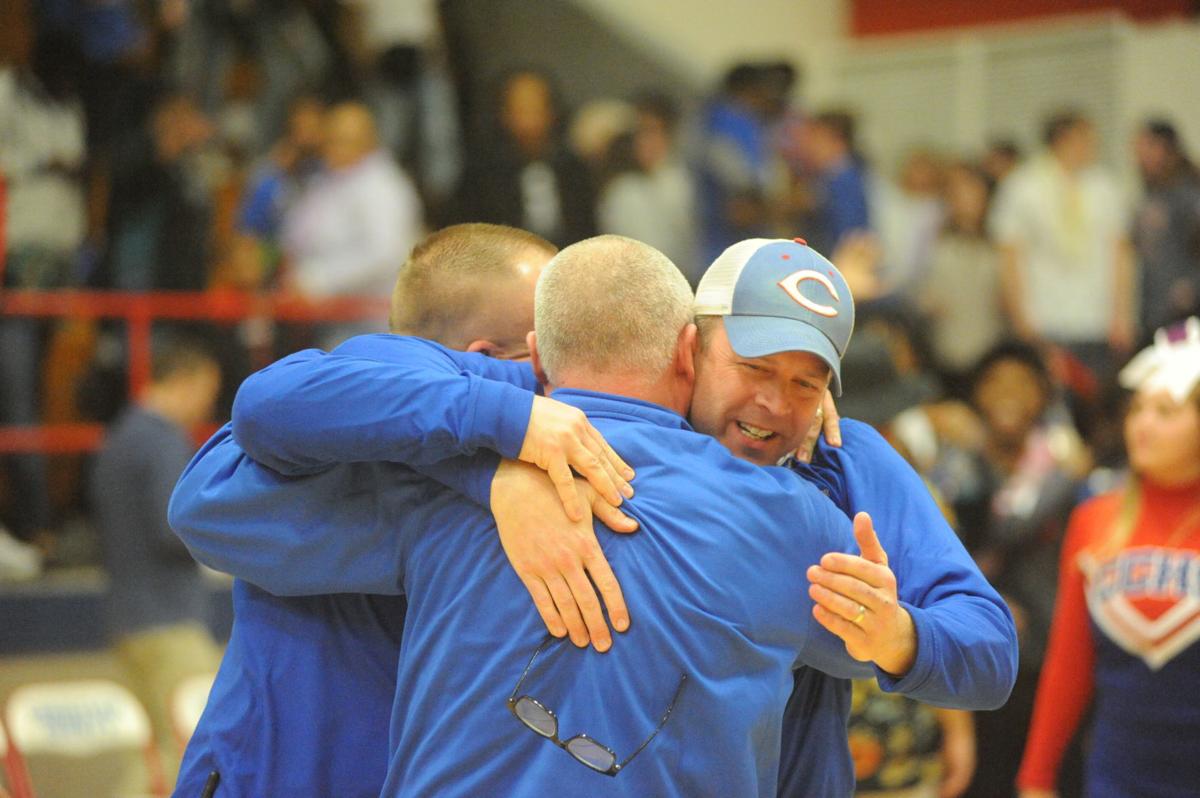 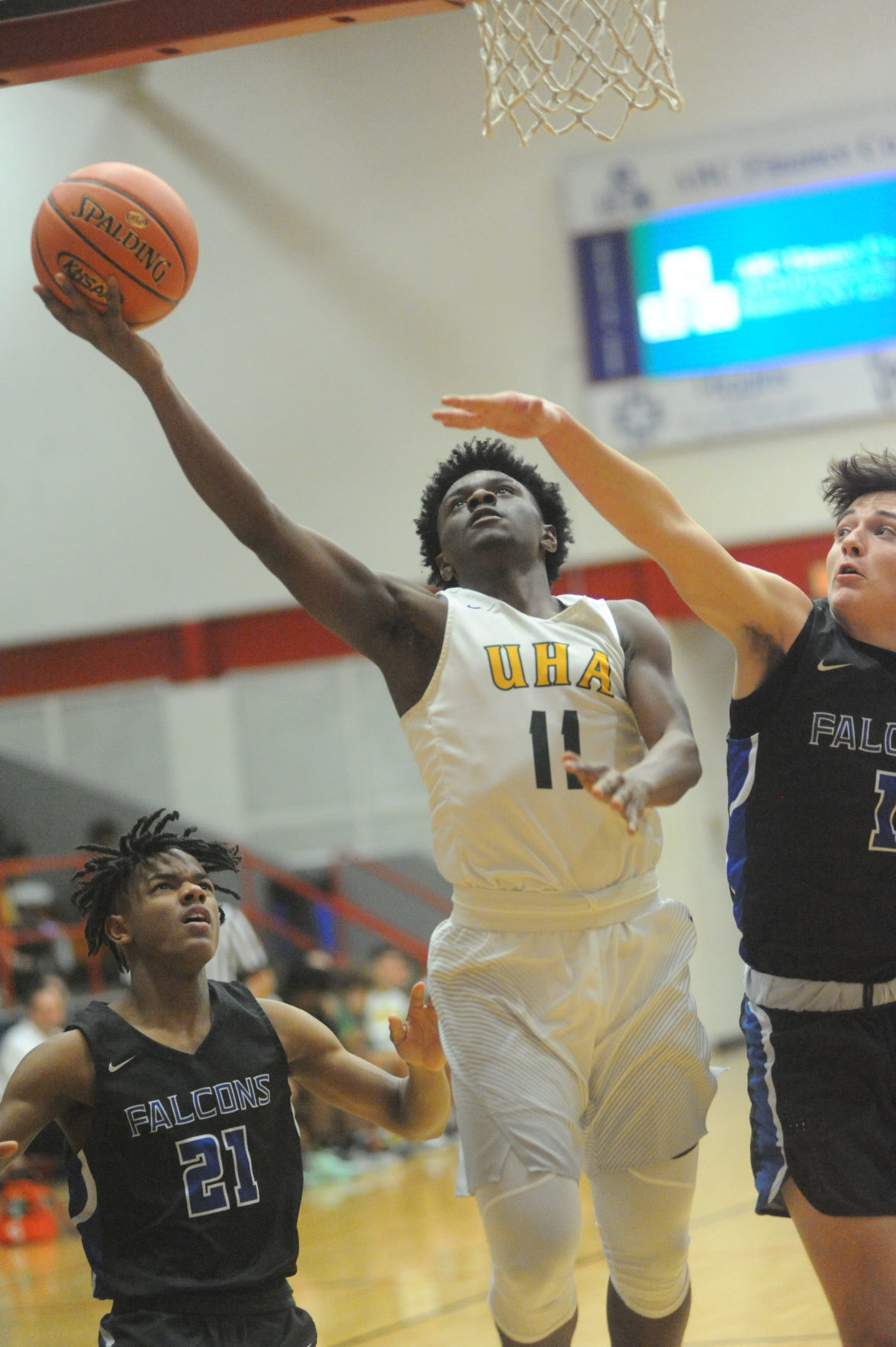 Left: University Heights Academy’s DJ Quarles rises for a layup during the Blazers’ win over Fort Campbell in the Eighth District semifinals.

Left: University Heights Academy’s DJ Quarles rises for a layup during the Blazers’ win over Fort Campbell in the Eighth District semifinals.

The boys’ Eighth District Tournament kicked off at Christian County on Tuesday night.

Both higher seeds took the win on the night, with University Heights Academy defeating Fort Campbell and Christian County taking down crosstown rival Hopkinsville in a thriller.

Bussell’s layup propels Colonels over TigersComing into Tuesday night’s Eighth District semifinal between Hopkinsville and Christian County, the last two meetings in the tournament came down to game-winning buzzer-beaters.

It wasn’t a buzzer-beater on Tuesday night, but it was about as close as you could get.

Christian County’s Stephen Bussell hit the game-winning layup with 3.3 seconds left, giving the Colonels a 50-49 victory over the Tigers as they secured a spot in the Second Region Tournament next week at Hopkinsville High School.

Bussell found a loose ball at his feet and after going around one player had a free lane to the basket.

“They tried to get the ball when we turned it over and Reece slid on the ground and missed the ball,” Bussell said. “I picked it up and went over (Daisjaun Mercer), scored the layup for the game.”

Christian County head coach Kerry Stovall said both teams gave it everything they had, but when it came down to it, the one player in white that never gives up had the ball in his hands.

“It’s just guts and determination by both teams,” Stovall said. “We were ahead in the first half and they took the lead on us. That’s two very determined basketball teams. Coach (Larry) Miller and his staff had them really well prepared and pretty much coached us out of anything we wanted to do. We were fortunate in the fact that we made shots early in the game.

“If you’re going to win in the postseason, the ball is going to have to bounce your way a little bit and it bounced our way a couple times tonight … Last play of the game there, we had two guys that pretty much had given up and gone the other way and the one player we have that will never quit, and that’s Stephen Bussell. That speaks a lot to his senior leadership. He wasn’t giving up.”

The game itself featured exactly what you want a game where the season is on the line to have.

Christian County jumped out to the early lead but the Tigers were not going away quietly.

Hoptown outscored the Colonels 13-2 in the second quarter to take the lead into the break.

Stovall said he wanted to make sure his team didn’t panic after only making one basket in the second frame.

“It’s the second quarter. There’s 16 minutes left,” Stovall said. “The first two words I put on the board were, ‘Don’t panic.’ Even when we got down nine there, just don’t panic. I firmly believe that if you can get three stops and three buckets that you can pretty much get into any game you’re behind in and our guys did that. We changed up our defense a little in the second half, sped the tempo up a little bit and we got a few more easy looks and our guys responded.”

The Colonels found themselves trailing by 10 in the third quarter, but Bussell said something his coach told him stays in his mind regardless of the score.

“My coach told us never give up,” Bussell said. “Even if you’re up or down, just never give up. Don’t sleep on the score.”

County didn’t give up.

Down 45-35, the Colonels sparked an 11-0 run to take a one-point lead. After Reece Jesse scored to give the Tigers the lead back, it wasn’t long after the Tigers got the lead that Olajuwon White gave it right back to County.

Alijah Watts made a basket to give the Tigers the lead late, but Bussell made sure he had the last basket and the last laugh.

Tuesday night’s game was significantly different than the first two matchups between the two teams.

Christian County took care of business in the first two, but Stovall said the Tigers having Watts back, as well as what was at stake, made a big difference.

“They’re a different team when (Watts) is on the floor,” Stovall said. “They’re a great basketball team. When he’s there he provides them with more weapons and allows them to go deeper and he just makes them a better team.”

Throughout the season, Stovall and his team have dealt with injuries since day one. Tuesday night marked the first time the Colonels had everyone dressed for a game since the very first game of the season.

Stovall said it was weird to look down the bench and see it full of guys ready to take advantage of their opportunity.

“We had bodies, but it was strange,” Stovall said. “We had to do so many different things to piece together ways to win and we had six or seven different lineups there and all six or seven could do something the others couldn’t. Over the next three or four days we hope we can get everybody on the same page as we go into the regional tournament.”

Buth through the adversity and the injuries, Stovall said it was a great moment to see his team step up and make it count when it mattered most.

“They inspire me,” Stovall said. “It pushes me to go harder and they’ve been an inspiration to me throughout the year with the things they’ve had to deal with on and off the floor. They made me young again tonight.”

Blazers cruise to district finalIt didn’t start the cleanest, but the UHA Blazers turned it on late in the first quarter to advance to Thursday’s district final.

Fort Campbell led the game early, but once UHA found its rhythm, it cruised as the Blazers defeated the Falcons 63-41 on Tuesday night.

Fort Campbell opened the game with a 7-5 lead on the Blazers and after a timeout from UHA coach Grant Shouse, the Blazers took control very quickly.

Shouse said he needed to get his team on the right page and once he was able to do that, it all worked out in his favor.

“Just really pushing the ball,” Shouse said. “I thought our defense was pretty solid even early on. We just weren’t scoring. I thought we were settling for tough shots, not really moving the ball, not really pushing the ball like we wanted to. Once we called a couple 30’s to emphasize getting out and running a little bit, getting our body language right and getting our energy level up, I thought once we did that, we were able to get out and get some shots in transition, but also our threes started going in because we were getting better looks.”

The Blazers took the momentum it had gained in the first and continued to pour it on, getting up by as many as 30 in the win.

The big positive for UHA on Tuesday was the return of DJ Quarles.

Quarles, who had sat out the last few games dealing with a concussion, played a bulk of minutes in his first game back and led the team in scoring with 15 points.

Shouse said having him back is a big boost to his team.

“I thought we were playing at a really high level when he went down,” Shouse said. “I hate to lose that kind of momentum this late in the season, plus when you play five or six games with a different group and a different rotation, it’s easy to settle into that and to start looking for things in that.

“It’s great to have him back out there, he provides us a lot of defense, provides us a rebounder and then any scoring we get is just an added bonus.”

Shouse didn’t rush getting Quarles back and wanted to make sure he was fully ready to go before they played him. He said he was glad to have him back and was happy that everyone walked out of the game healthy ahead of Thursday’s district championship.

“Anytime you deal with what we dealt with and a concussion is something that you’re going to be very cautious with, but these kids are too valuable to take chances with,” Shouse said. “At the end of the day, it’s a high school basketball game. He’s got another year ahead of him and we were glad to have him back out. We need him in the lineup.”

The Blazers will face off against Christian County at 7 p.m. on Thursday night. Shouse expects the battle for the Eighth District crown to be exactly that.

“Whoever it is on Thursday night, obviously we’re going to expect a war,” Shouse said. “You have to have that mentality to come in here. I’m proud of them for being in the championship game three years in a row and hopefully, we can take care of business and come out of here with what we came for.”