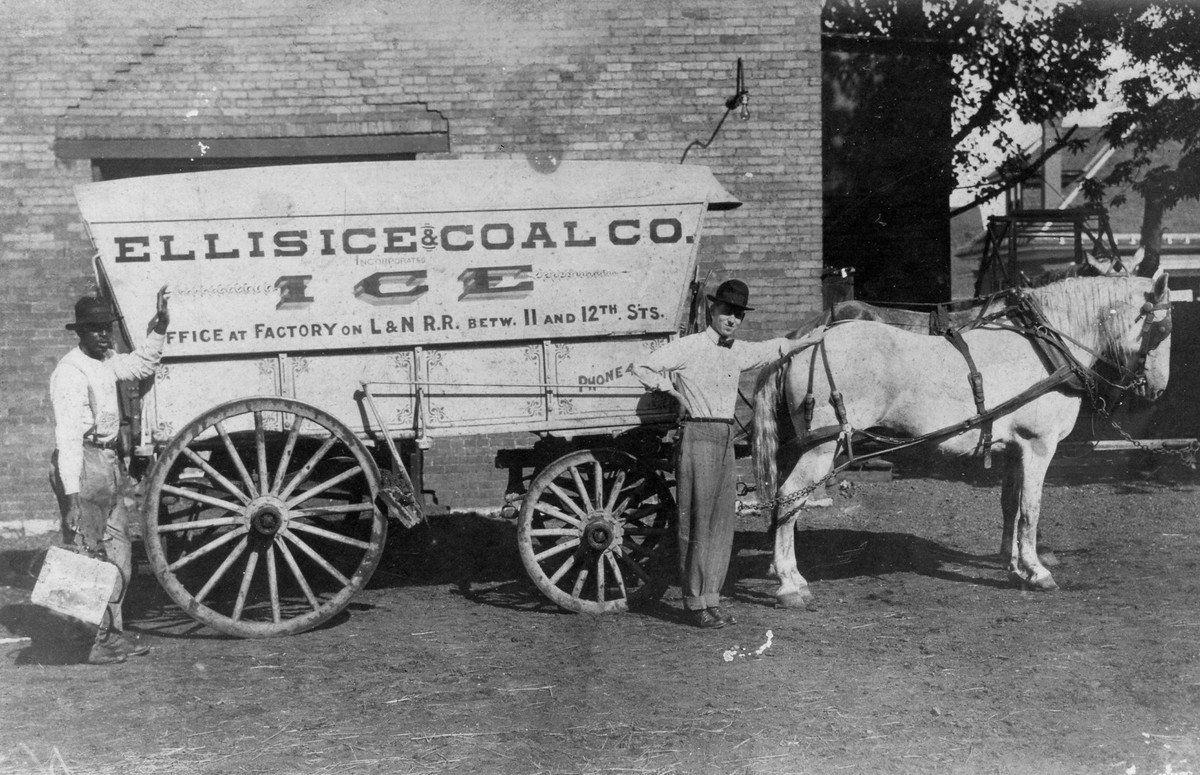 The Ellis Ice & Coal Company had 12 horse-drawn wagons to deliver their products to the residents of Hopkinsville. On site, stables were required, of course, for the 12 horses. Later, the 12 wagons were replaced by four trucks, which were either GMC or Ford models. 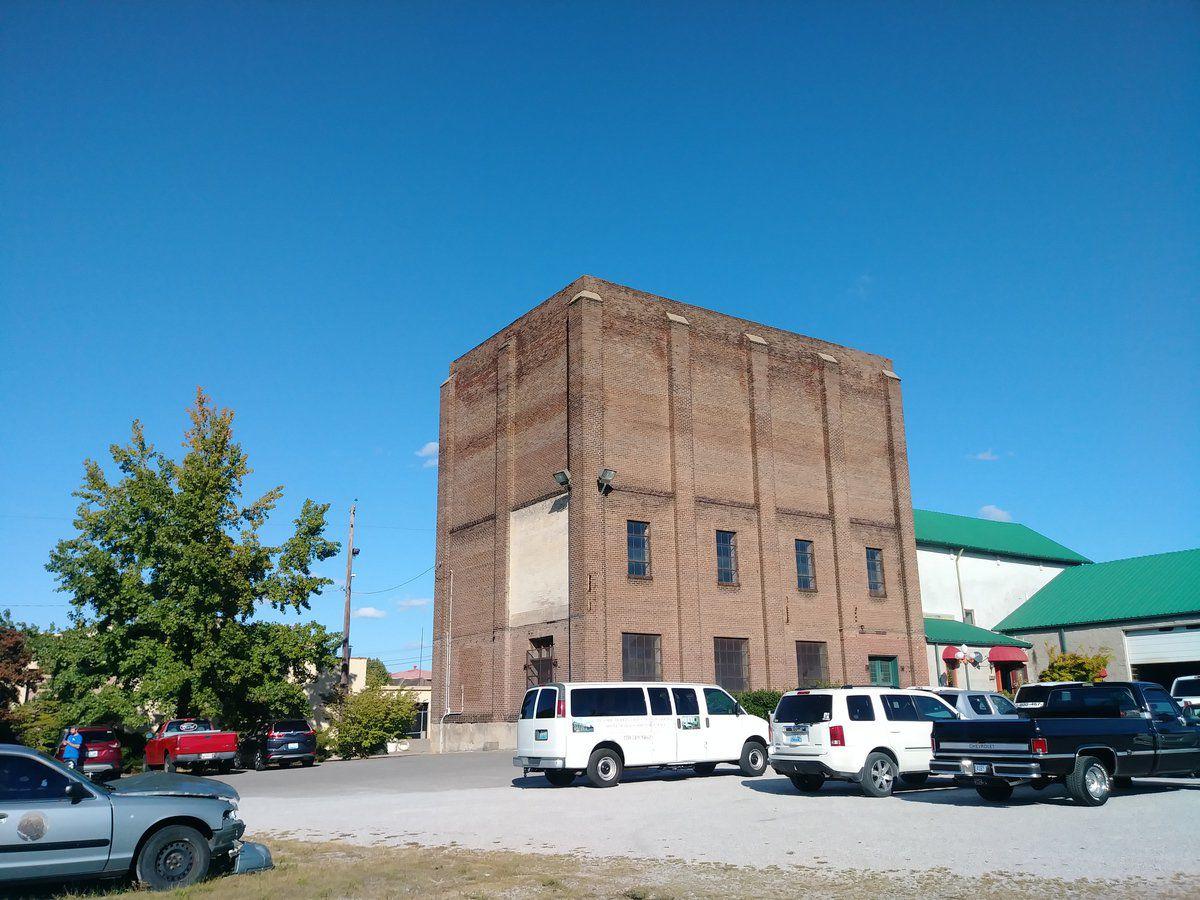 The Ellis Ice & Coal Company took up space between 11th and 12th on Clay. A sign painted onto the brick wall on 11th Street between Clay and Campbell was the business' ice storage building.

The Ellis Ice & Coal Company had 12 horse-drawn wagons to deliver their products to the residents of Hopkinsville. On site, stables were required, of course, for the 12 horses. Later, the 12 wagons were replaced by four trucks, which were either GMC or Ford models.

The Ellis Ice & Coal Company took up space between 11th and 12th on Clay. A sign painted onto the brick wall on 11th Street between Clay and Campbell was the business' ice storage building.

Set back from Clay Street at the corner of 11th is a rather large, imposing and exceptionally tall brick structure, which has been hiding in plain sight since 1919. It looks like a city power substation, an equipment plant for a hydroelectric dam or one of the old direct current buildings in New York City. If we go onto 11th Street between Clay and Campbell, we can still see a sign painted onto the brick wall which identifies it as the Ellis Ice & Coal Company. This was their ice storage building. It unleashes memories of another era, one that those of a certain age seldom if ever contemplate.

The Ellis Ice & Coal Company took up space between 11th and 12th on Clay, and one can still make out the small house that served as the office, the tall brick storage building, and the adjacent building further back on 11th Street, where the ice was made.

From the period just after the Civil War through the mid-1960s in Hopkinsville, one could have ice delivered to the back door in summer and from the same firm coal in winter. The service alleys that ran behind houses in those days are still identifiable in 2019, and some are just as they were.

The Ellis Ice & Coal Company was operated for generations by the same family. In 1840 William Ellis came from Maryland and settled here in Hopkinsville. Initially he set up business as a tailor. Changing careers twice, he next bought and operated Hopkinsville Mills in 1874 -- which was a flour mill that later burned in 1887. Instead of replacing the mill, he constructed his ice and coal company on the same site -- thus establishing this third and final career.

William had two sons Forrest and Lee. William and Forrest (father and son) both died in the same year -- 1897, just a decade after forming the business -- and younger son Lee assumed the mantle. When Forrest's son Louis grew up, he took control of the company. Louis ran the business until he died in 1943.

It may astonish most of us to learn that refrigerators were not invented for home use until 1913. Before the mid-1920s when freon came into common use as a refrigerant, it could actually be somewhat unsafe to even have a refrigerator in the house, as the first gasses employed in refrigeration were not as we say today "user friendly." In fact they were downright dangerous if they began to leak, as many did.

In the 1930s only 8% of American homes had refrigerators, a statistic that the depression helped keep in check. Only after the second world war, in 1946, did Americans -- many returning home from the war -- begin to see a dramatic rise in the use of refrigerators in the home. Actually, it wasn't until the period of economic recovery in the early 1950s that most homes had refrigerators.

So, from the post Civil War Era until the mid-1960s the Ellis Ice & Coal Company provided services to the residents of Hopkinsville and Christian County that one would describe not as luxuries but necessities. One needed to stay warm in winter and have a means of keeping food cold in the summer. Iceboxes of the period had the ice reservoir on the top of the unit, and a lead pipe that ran from the collection pan at the bottom of the unit through the floor to the ground below.

As befitted a major business in the city, the Ellises kept their buildings, equipment and the grounds of their business property in tip top condition. The Ellis Ice & Coal Company had 12 horse-drawn wagons to deliver their products to the residents of Hopkinsville. On site, stables were required, of course, for the 12 horses. Later, the 12 wagons were replaced by four trucks, which were either GMC or Ford models.

Two fresh deepwater wells on site provided the water to make the ice. Concrete vats 40 x 60 feet wide were constructed for the ice making process. Pipes with brine and ammonia ran through these vats to reduce the temperature to freezing. Huge cakes of ice were lifted out of the vats and cut into smaller cubes -- 100-pound blocks -- for transportation and distribution. Ice was available to the public in 100-, 50-, 25- or 10-pound blocks. Cards were provided by the company and were put in the windows which indicated the amount of ice that a customer wanted on any given day. Ice for years cost 50 cents per 100 pounds. One needed to sell a lot of ice in those days to turn a handsome profit -- and they did.

Businesses used ice too, such as Forbes & Company and Cayce Yost. Ellis even sold ice to the L & N railroad for their icebox cars, until refrigerator cars came into being just prior to our entry into World War II in 1941.

Once a week, people from the country came to Hopkinsville to get their ice. There were actually country ice routes and straw was used in the wagons and trucks to keep the ice from melting too quickly.

Until the outbreak of the second world war, the Ellis Company also made ice cream -- probably strawberry, chocolate and vanilla. They bought their milk from Bordens and called their product Rose-Tex ice cream. It had a red rose as its emblem on all the boxes.

After Louis' death in 1943, his widow Elizabeth continued to run the company until her demise in the 1960s. By this time, icebox holdouts were few and far between. The evolution of every social and economic class by this time enabled almost everyone to have a refrigerator in the home, as well as central heating. The company that had served our community for so very long and so very well can be said to have died a natural death. Gone, but not forgotten.

For a time in the 1970s there was a restaurant in the building that used to be the office, called appropriately enough The Ice House Restaurant.

Join us in November as we conjure up something for the Thanksgiving season.

James B. Coursey's Hiding in Plain Sight column appears monthly in the Kentucky New Era. His column is researched jointly with County Historian William T. Turner. Reach James Coursey at 270-719-9462 or email him at jbcourseydesign@gmail.com.