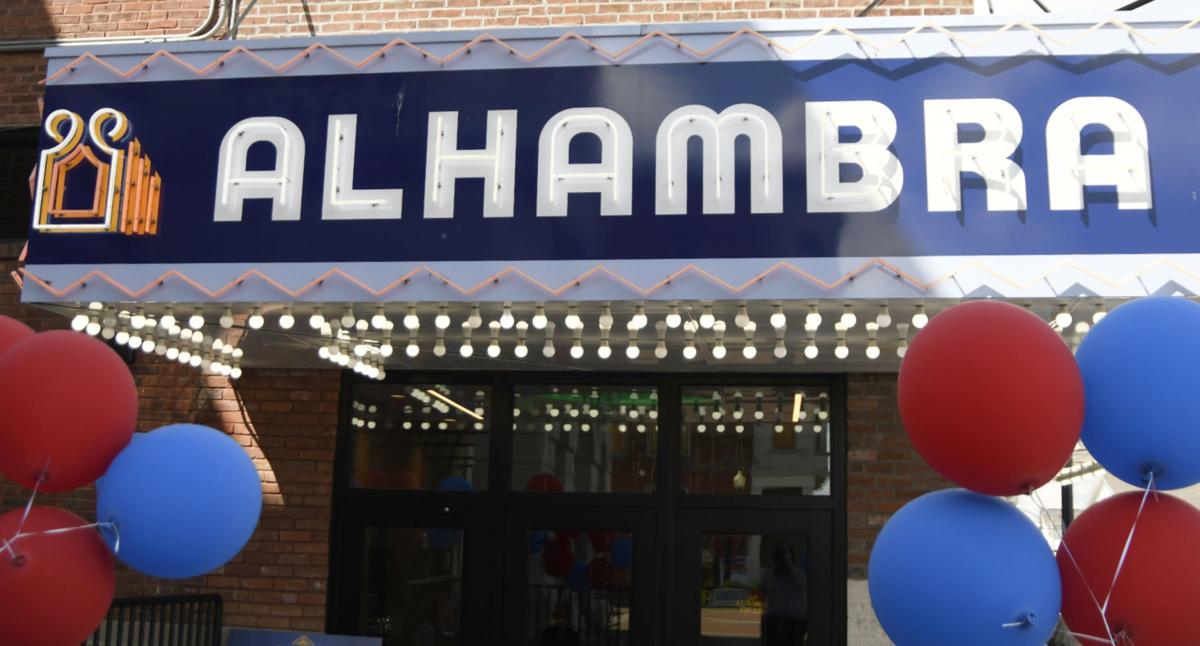 The Alhambra Theatre in downtown Hopkinsville will reopen Thursday as a movie theater after being closed over two months because of COVID-19. Tickets for “National Lampoon’s Vacation” are on sale now at pennyroyalarts.org.

Cars line up for a drive-in showing Saturday at Hopkinsville Parks and Recreation’s Movies in the Park summer series kick off at Tie Breaker Park. For people who are not ready to watch movies in a theater, officials invite the community to Ruff Park on Friday evening for “The Lion King.” 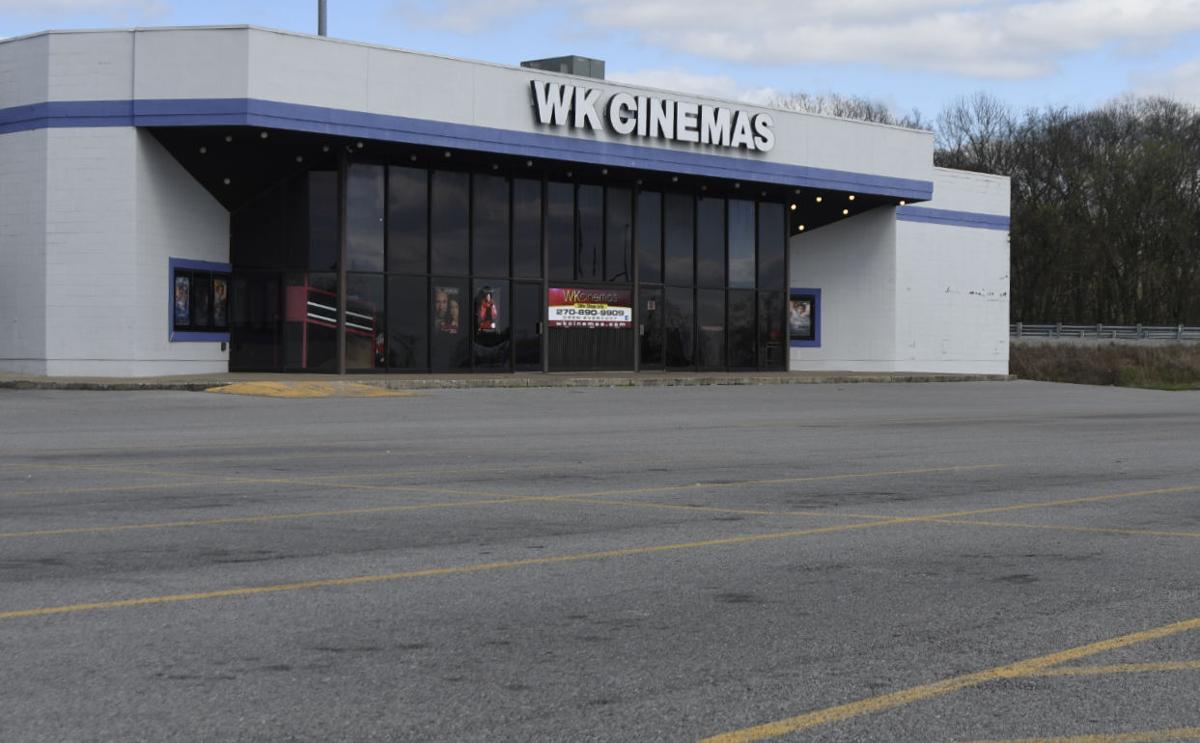 WK Cinemas reopens Friday at one-third capacity under the state’s Healthy at Work guidelines. The movie theater parking lot was empty in mid-March after being shutdown because of the coronavirus pandemic.

The Alhambra Theatre in downtown Hopkinsville will reopen Thursday as a movie theater after being closed over two months because of COVID-19. Tickets for “National Lampoon’s Vacation” are on sale now at pennyroyalarts.org.

Cars line up for a drive-in showing Saturday at Hopkinsville Parks and Recreation’s Movies in the Park summer series kick off at Tie Breaker Park. For people who are not ready to watch movies in a theater, officials invite the community to Ruff Park on Friday evening for “The Lion King.”

WK Cinemas reopens Friday at one-third capacity under the state’s Healthy at Work guidelines. The movie theater parking lot was empty in mid-March after being shutdown because of the coronavirus pandemic.

The five-screen theater is reopening under the state’s Healthy at Work guidelines after closing more than two months ago because of the coronavirus outbreak.

Jake McSparin, vice president at VIP Cinemas, said the company has theaters in Missouri and Georgia which have already reopened, so those are serving as models for Hopkinsville’s facility.

“One of the main things we’ve done as we’ve looked to reopen is staff training. We’ve redoubled our efforts in terms of how we clean after shows,” he said. “We have ushers go into theaters and monitor to make sure people are social distancing, No 1., and No. 2 … we’re giving extra attention to make sure we completely sanitize between each show.”

McSparin said groups will be limited to six people or less. Customers will not be required to wear masks in the theater, but they must maintain the state’s social distancing guidelines.

“Our largest auditorium seats 245 people, so we’re very comfortable with our ability to get 35 or 40 people in there and everyone has more than ample space to spread out and stay safe,” he said.

McSparin said a limited schedule will continue for the foreseeable future.

The theater will be open “Friday, Saturday and Sunday,” he said. There will be “three shows a day as opposed to before the coronavirus problem (when) we were running more like five shows a day.”

Some of the movies which will be shown on WK Cinema screens will be spring releases, McSparin said.

“It’s going to be one of our largest challenges the next few weeks,” he said. “It’s looking like most studios aren’t looking to release mainstream blockbuster films at least until mid-July, if not later. So, on Wednesday we are showing a lot of the product that was available before the (COVID-19) shutdown.”

“Some of the independent studios are still bringing out content, so a new movie that came out (May 22) was ‘The High Note.’ We’ll be showing that, as well,” McSparin said.

Because the movies are a little older, McSparin said customers will notice a reduced ticket price.

“All of our ticket prices will be $4 and that will probably remain the case until at least mid-July for all of our shows,” he said.

McSparin said expiration dates for VIP passes and VIP popcorn buckets will be extended, as well.

“We are pushing back that date for the period of months we were closed,” he said. “Anyone who has one of our VIP buckets, we’re making that good for the entire next year.”

For updates and showing times, visit wkcinemas.com and the theater’s Facebook page.

After turning 92 last week, the Alhambra Theatre in downtown Hopkinsville, will reopen and return to her roots as a movie theater.

The vintage facility will be showing “National Lampoon’s Vacation” starring Chevy Chase at 6 p.m. Thursday night. Tickets are $6 each at pennyroyalarts.org. The movie is Rated R.

“We had our movies for this season already on tap,” said Margaret Prim, Pennyroyal Arts Council executive director.

Prim said special care is being taken to ensure a safe, sanitary experience at the Alhambra.

“We are doing everything to get our theater in pristine, clean and safe shape for our folks to come back,” she said. “Our No. 1 priority is the safety of our employees and our patrons. We want to make sure everybody feels safe and feels good about reentering the theater.”

Although theaters are allowed one-third capacity, Prim said they are going to have smaller audiences at first.

“We can social distance very easily in the theater under the guidelines we are under,” Prim said. “We could open at 33% capacity, which is 214 people, but we’re going to cap it at 100.”

Because of COVID-19, the Alhambra closed its doors to the public March 16. Since then, Prim said it’s been a tough few months.

“It’s been beyond difficult,” she said. “We have lost $108,000 of revenues to date. That’s the revenue we had on the books for rentals and for shows. So it’s pretty devastating for a small nonprofit like ours.”

Prim said they also received the Kentucky Arts Council CARES Program grant and the Kentucky Humanities CARES grant. Both of those grants total $7,000.

Prim said the theater received $1,300 in birthday gifts last week during the drive-in celebration from a supportive community. To generate more funds, they opened up season ticket sales for 2020-21 early.

“We’re at about a 50% renewal rate right now which is incredible,” she said.

Prim said she has started scheduling the 2020-21 performances at the Alhambra. Shows begin Sept. 18.

“We’re very excited that we’ll be able to have our ‘Live (at the Alhambra)’ season this fall and next year,” she said. “We’re moving forward with the expectation to be able to open (fully) at some point.”

Prim said even more productions may be added this year.

“I won’t ever be able to regain the total revenue that I lost (because of COVID-19), but we probably will add in some shows,” she said.

After several weeks of empty seats, Prim said she and the theater staff are ready to reopen the Alhambra.

“The theater, for all of us who care so much about her, she is made to share,” Prim said. “It’s a community theater and we want everybody to feel safe and good about being back in the theater. We’ll be there to welcome people back. We’re excited about things to come.”

Movies in the Park

For people who are not yet comfortable watching films in theaters, the Hopkinsville Parks and Recreation Movies in the Park summer series has returned.

The series kicked off Saturday night with “Frozen II” at Tie Breaker Park in a drive-in setting, meaning families were required to remain in/on/next to their car during the movie. Loud speakers and radio tuners were available for audio.

“We had a great crowd. We estimated at 350 or more,” said Tab Brockman, Parks and Rec superintendent. “Everybody stayed around their vehicles. It worked out very nicely. It was a beautiful night.”

Brockman said going to drive-in movies is nostalgic for some seasoned movie watchers.

“Drive-in movies still exist today, but they are a piece of American culture,” he said. “It’s kind of nice to do the turn-back and show our kids what it’s like when you used to go to the drive-in. It can be a fun, entertainment thing, but it can also be a history lesson.”

The series continues Friday night with “The Lion King” at Ruff Park. The movie starts at 8:15 p.m.

Restrooms will be able for use, but there is no congregating or group solicitation allowed. No food or drink vendors will be on site, so organizers invite the audience to bring their own snacks.

“We always want to do family-type movies,” Brockman said. “We would like to do some action pictures too.”

Brockman said this week organizers will be adding some more movies to the schedule for July 3, July 31 and Aug. 14.

“We know folks very much want to get outdoors and do things,” he said. “This is a great opportunity for them to enjoy the parks and have entertainment as well.”