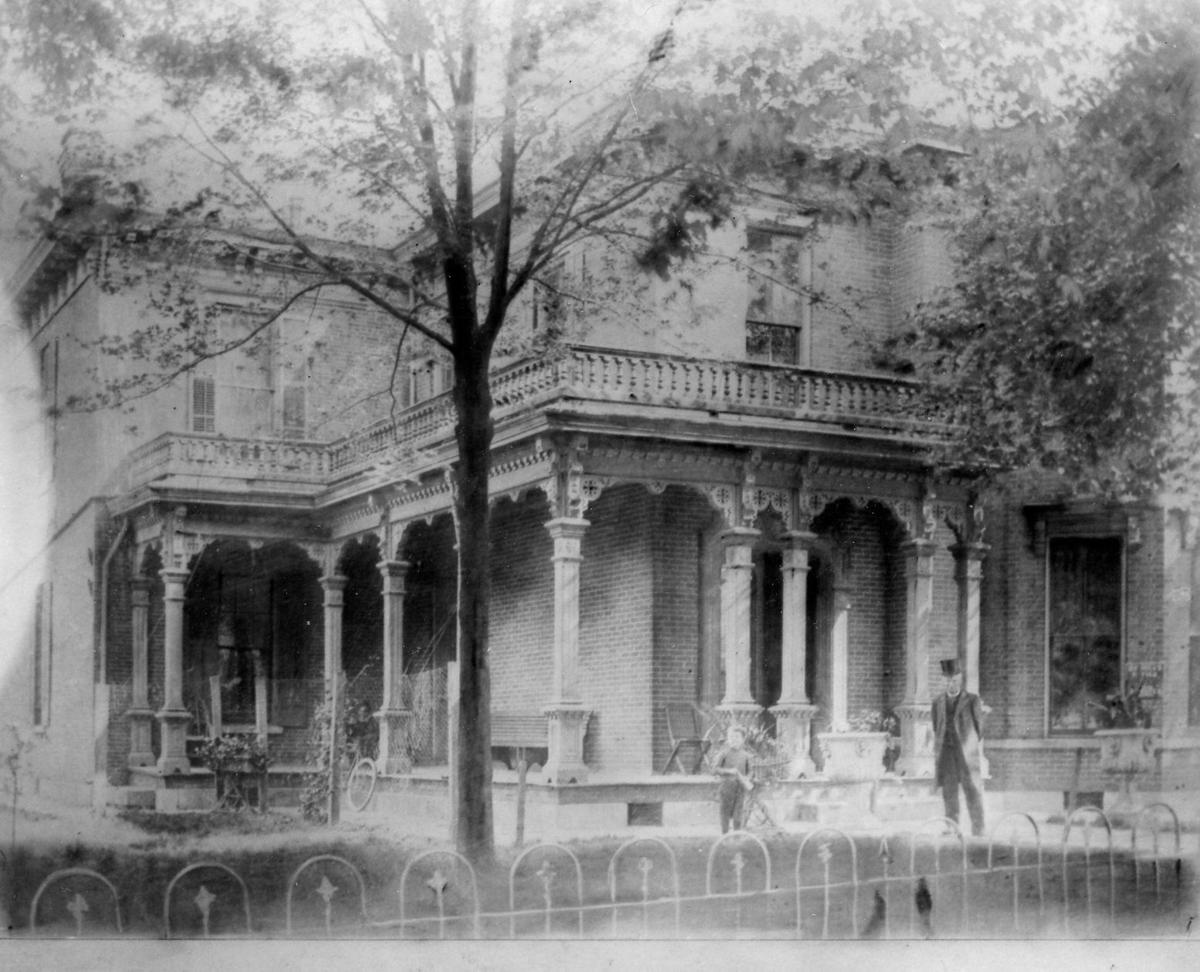 The Hill house in the 1880s, with it’s brand new front section. 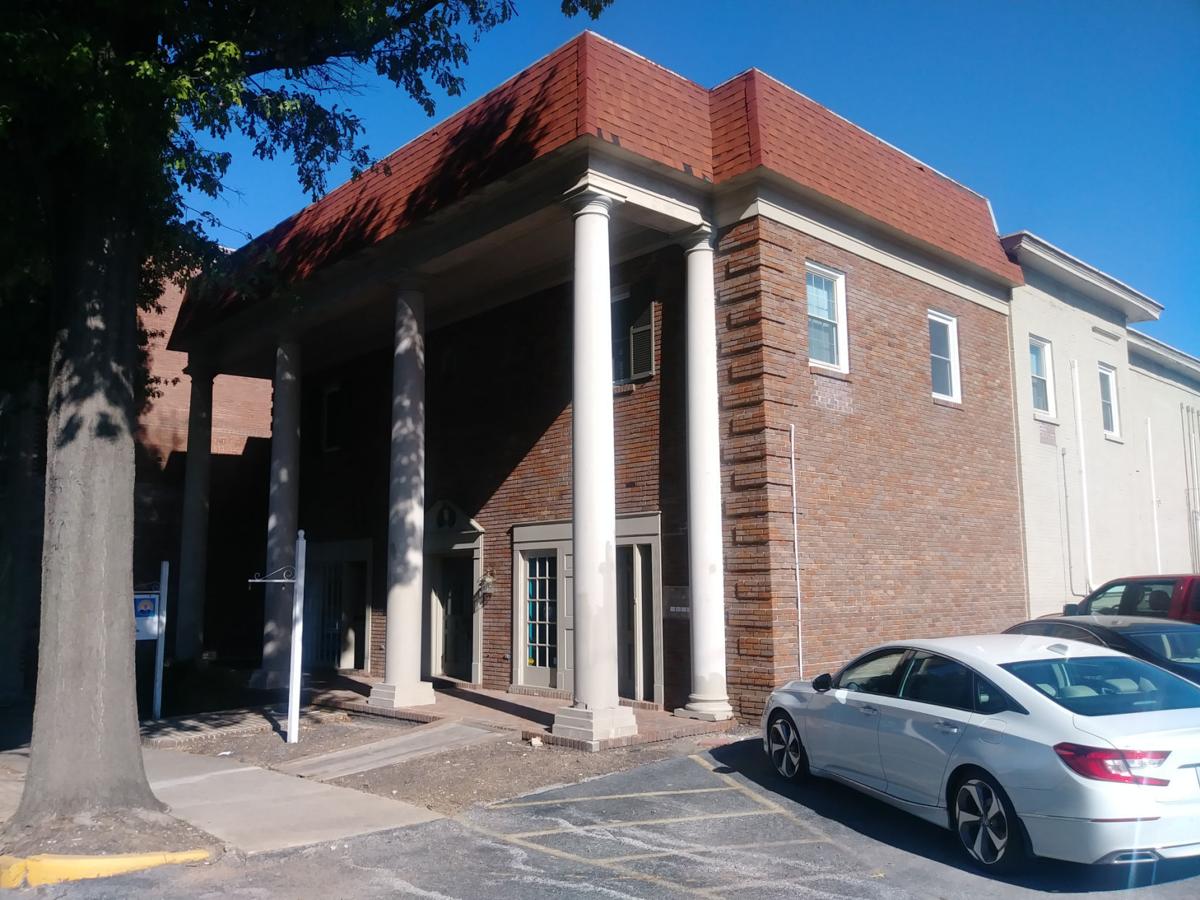 At the Hill House today, notice the middle side section, which is part of the original structure. 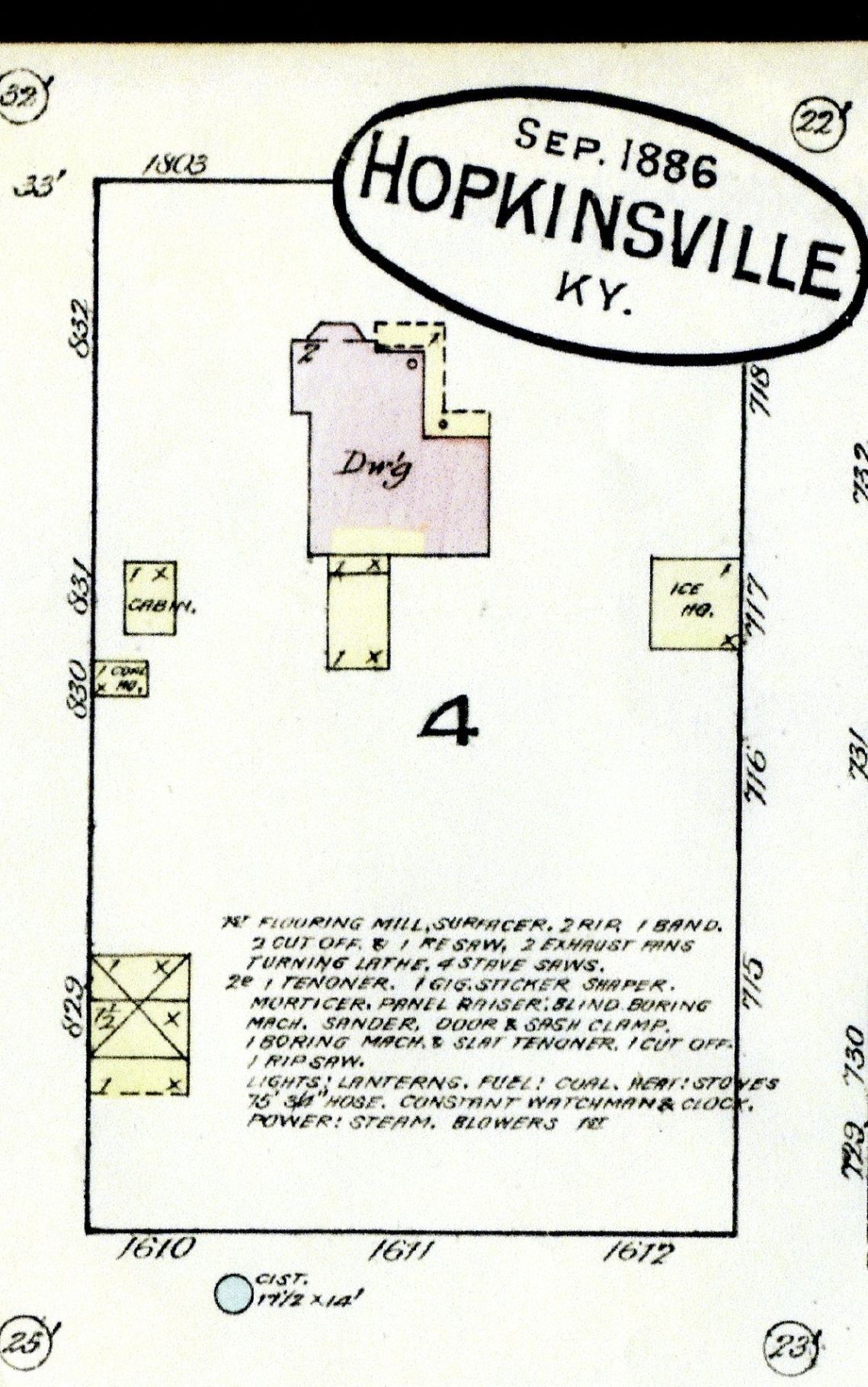 A September 1886 Sanford Fire Map shows the Hill house on its lot, taking up an entire city block.

The Hill house in the 1880s, with it’s brand new front section.

At the Hill House today, notice the middle side section, which is part of the original structure.

A September 1886 Sanford Fire Map shows the Hill house on its lot, taking up an entire city block.

Today our eyes have landed on a South Main office building that started out life as one of Hopkinsville’s most substantial if long-forgotten homes, on an impressive lot whose area comprised an entire city block from Main to Virginia, and from 11th to 12th streets.

Built in two sections at different times, the earlier rear section (judging from the only photograph we have) was probably (considering its scale) built sometime in the decade before the Civil War. We can further surmise from a window detail in the photograph that the Hill house was constructed in the then popular Greek Revival style.

The Hopkinsville of the 1850s would be unrecognizable to almost all of Hopkinsville’s current residents, since so much of it no longer exists — even in the minds of our most mature inhabitants. Considering the fact that the existing shell has also been eviscerated, there is no clue on the inside about the house as built, or even after its later Victorian additions. What we do have in addition to the picture is the Sanford Fire Map of September 1886, showing the house with the Victorian addition — including a kitchen wing and four outbuildings.

In 1874, M. W. and Martha West sold the house — as originally built — to Dr. William and Alice Cayce Hill. It is believed that the Hills built onto the front section in the 1880s, expanding the residence, and modernizing it in the then popular late Victorian style. Our one picture of the house was taken after this Victorian addition had been installed. This was the Hills’ primary residence.

In 1907 (just a year before Dr. Hill died), Dr. and Mrs. Hill sold the northwest corner of their house lot M. C. Forbes and Forbes constructed the three story office building (still standing), which was later the home of the Elk Brand Shirt & Overall Co and later still Planter’s Hardware on the ground floor. Finally, Cayce Yost used the second floor for their Ethan Allen Gallery.

Only four years after Dr. Hill died in 1908, Mrs. Hill in 1912 moved into a small cottage beside the house, and rented the big house out to the Blumensteel family — Miss Ella and Miss Ida, who were sisters. Miss Ella operated a dressmaking shop in the home and Miss Ida worked at J. H. Anderson’s department store. The Blumensteels operated a boarding house in the home to bring in extra money. The boarding house operated there until 1946, for an impressive 34 years.

In 1920, crass commercialism further crept up onto the spot with the sale of the southwestern corner for the construction of the Sudden Service Station, which was moved in 1935 to its present location on East Ninth Street. Although not yet advertised, the Sudden Service station now features an electric charging station, instead of gas pumps.

In 1946 three doctors bought the Hill house and converted the entire building into doctors offices and a general practitioner’s clinic. The William Hill House was later known as The Clinic. The three doctors who inhabited the building beginning in 1948 were Dr. Guinn Cost, Dr. Charles Yancey and Dr. Gabe Payne. During the doctors time there, the pseudo Colonial facade was added with new main entrance, featuring a broken pediment.

The clinic operated through 1958, and was afterward vacant for several years. A number of businesses subsequently took up operation in the space. They included Bel-Tone Hearing Service, Metropolitan Life Insurance Co. and Pennyrile Travel Agency.

At some point it was sold to Kenneth and D. D. Cayce and they rented the space out to various businesses. It was sold again in 2019. Today the United Way office dominates the spot, and the second floor has been divided into apartments.

In common with the Clayton Jewelry building on East Ninth Street — our July 2020 HIPS offering — one would have no clue as to the original configuration and use of the Hill home by looking at what we see there today. This serves to emphasize how important historic pictures are to the ongoing effort to preserve our architectural history. These are backed up in many cases by the invaluable Sanford Fire Maps. Sanford Fire Maps came into being just after the Civil War. These carefully detailed maps had been used in London since the 18th century to assist in the evaluation of fire risks, among other things. They accurately depict the measurements of all lots on which the houses were constructed, as well as the dimensions of the houses themselves. Color coded, they provide further information such as the kind of construction (brick, wood, etc.) and the type of roofing material used. All outbuildings are also depicted and correctly scaled in the bargain. These maps were bound in volumes and used up until the 1960s.

As the fall leaves denude the trees this season, perhaps they will reveal another architectural marvel for us to focus on in November.

James B. Coursey’s Hiding in Plain Sight column appears monthly in the Kentucky New Era. His column is researched jointly with County Historian William T. Turner. Reach Coursey at 270-719-9462 or email him at jbcourseydesign@gmail.com.