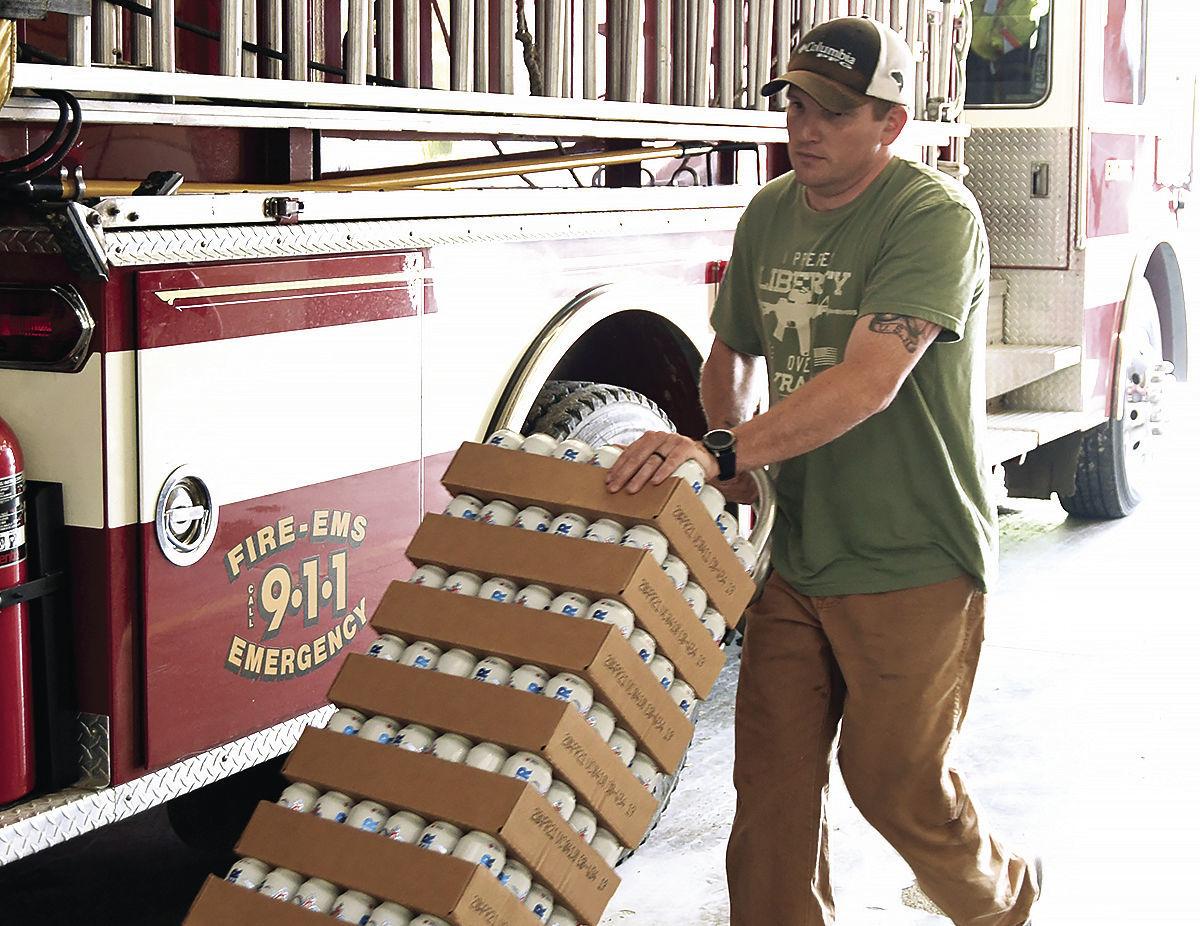 West Side Volunteer Fire Department firefighter James Kauffman pushes a dolly filled with cases of canned water into the station Friday afternoon. Bluegrass Beverage in Hopkinsville, an Anheuser-Busch wholesaler, delivered the water to West Side. 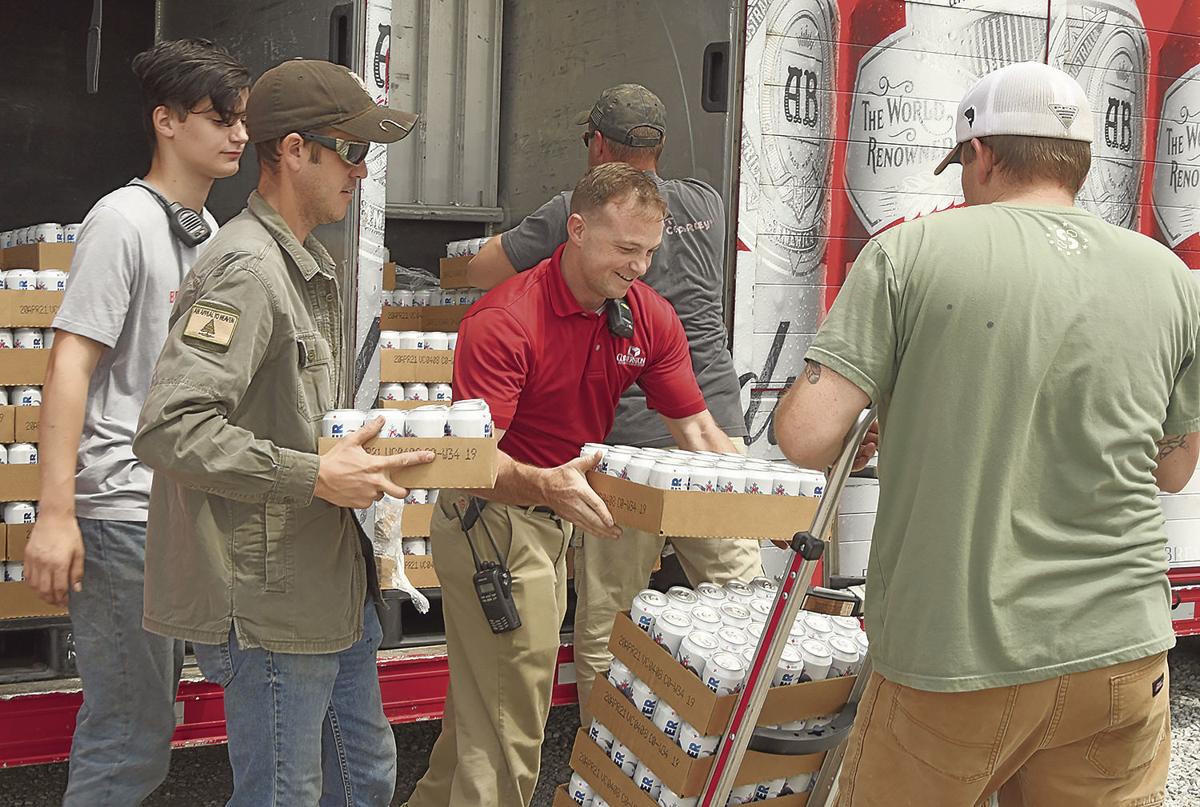 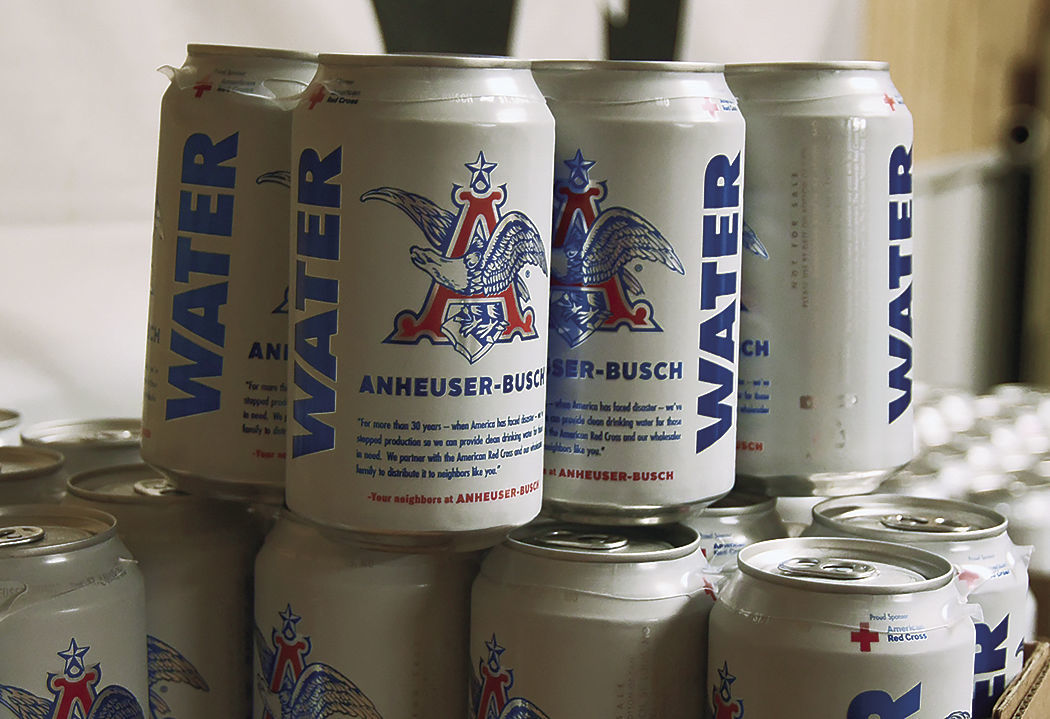 West Side Volunteer Fire Department firefighter James Kauffman pushes a dolly filled with cases of canned water into the station Friday afternoon. Bluegrass Beverage in Hopkinsville, an Anheuser-Busch wholesaler, delivered the water to West Side.

Temperatures hovered in the low 80s Friday afternoon as West Side Volunteer Fire Department firefighters unloaded 98 cases of canned water donated by Anheuser-Busch through a partnership with the National Volunteer Fire Council.

The station received the donation after Mike Wilson, West Side fire chief, applied last year for the Emergency Drinking Water for Wildland Firefighters program. To date, the program has donated over 1.6 million cans of water to volunteer firefighters across the country.

Wilson said water is critical for the safety of his department especially in the summer months.

“It’s easy to get dehydrated with all the gear we have on. It don’t breathe,” Wilson said. “If it’s 100 degrees outside and you’re going into a fire and it’s 200-300 degrees. You’ve got coats and jackets and helmets on, so you dehydrate real quick.”

Terry Griffin and Devin Henderson with Bluegrass Beverage in Hopkinsville, an Anheuser-Busch wholesaler, delivered the water to West Side.

“During this time in our lives with everything with COVID-19, everyone’s got the first responders in their thoughts and prayers all the time,” said Griffin, Bluegrass Beverage general sales manager. “This just goes along with that. Hydration is critical to your job and mine — just think about the firefighter. Dehydration can happen so quickly. It’s a great opportunity to do something here locally.”

The brewer teamed up with the fire council — “the leading nonprofit membership association representing the interests of the volunteer fire, emergency medical and rescue services — in 2019 to provide emergency drinking water to help firefighters stay hydrated and healthy when responding to wildfires and large incidents,” according to the site.

Wilson said the West Side usually purchases its own water with dues they receive from residents in the area surrounding the station on Spain Lane.

“It takes (quite) a little bit of our budget to do that,” he said.

Wilson said the station usually buys two to three cases of water at a time, which lasts about a month to six weeks depending on their workload.

Wilson anticipates this donation of 98 cases of canned water will last the department six to eight months.

“It’s a good deal between Anheuser-Busch, the National Volunteer Fire Council and all the fire departments,” he said.

The next application period for the Emergency Drinking Water for Wildland Firefighters program is July 1 to Aug. 31. Fire departments may apply online at: https://nvfc.wufoo.com/forms/2020-wildfire-emergency-drinking-water-for-vfds/.