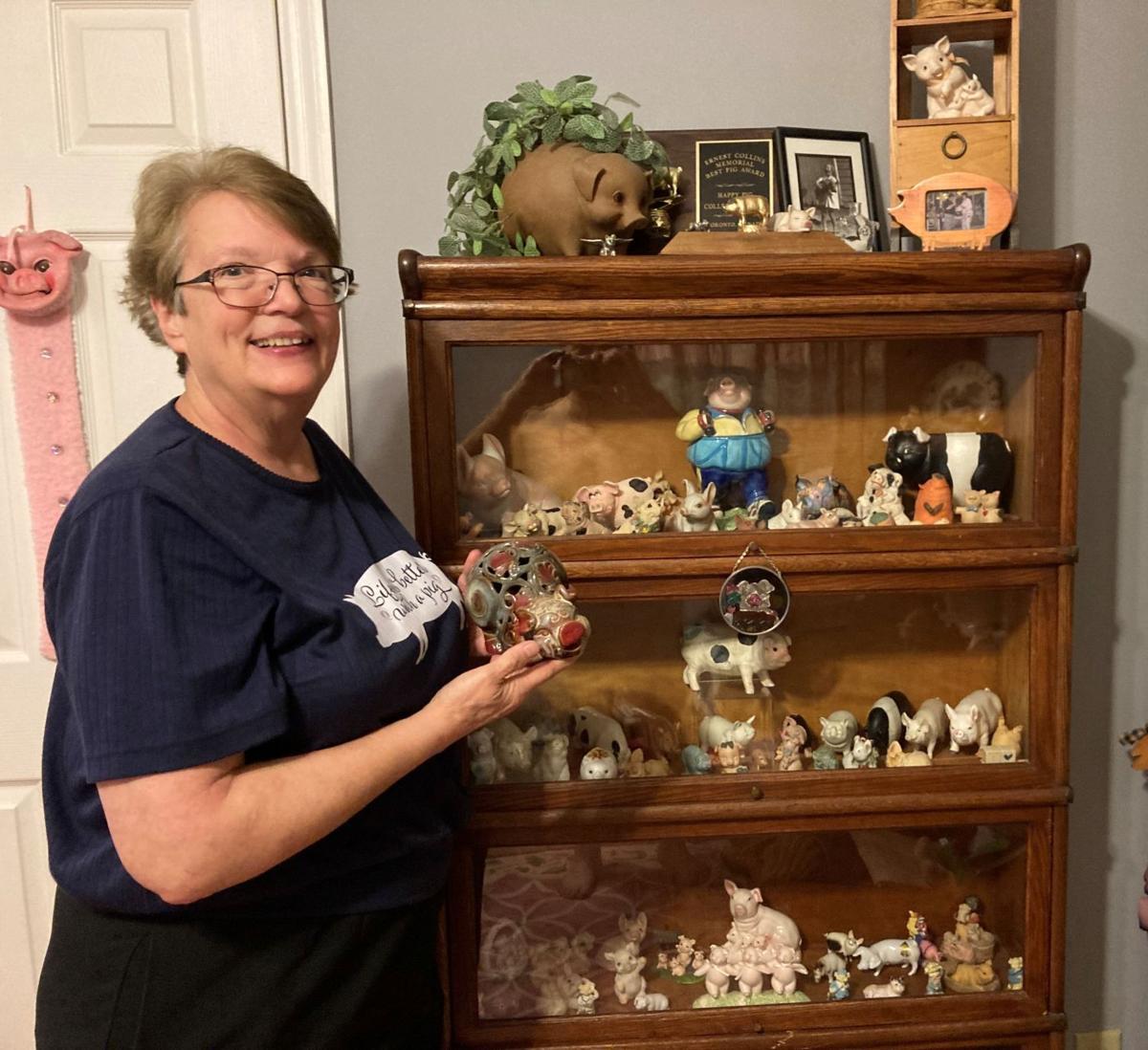 Janet Booth is pictured with items from her pig collection. 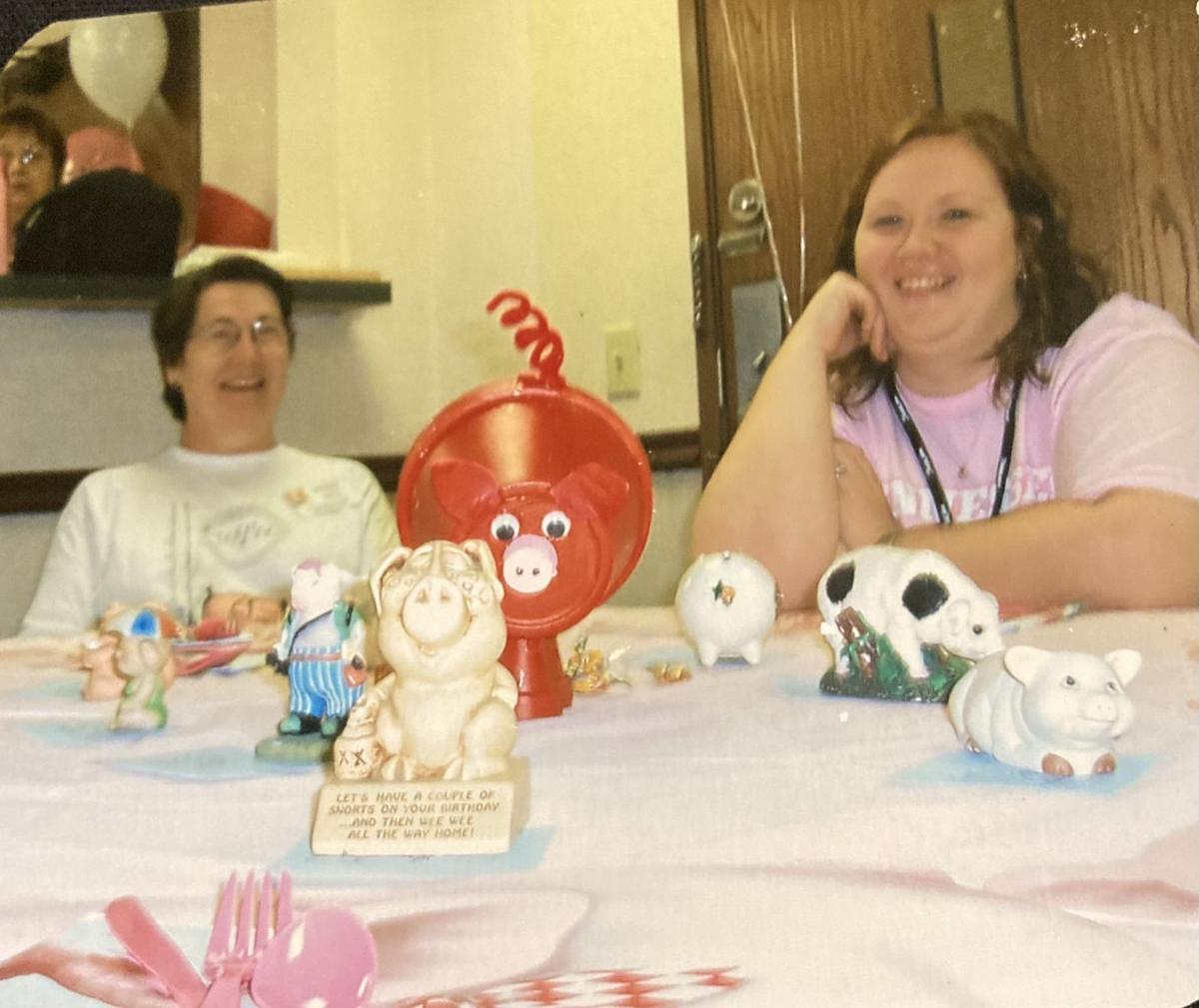 Participants display some of their pigs at a previous convention. 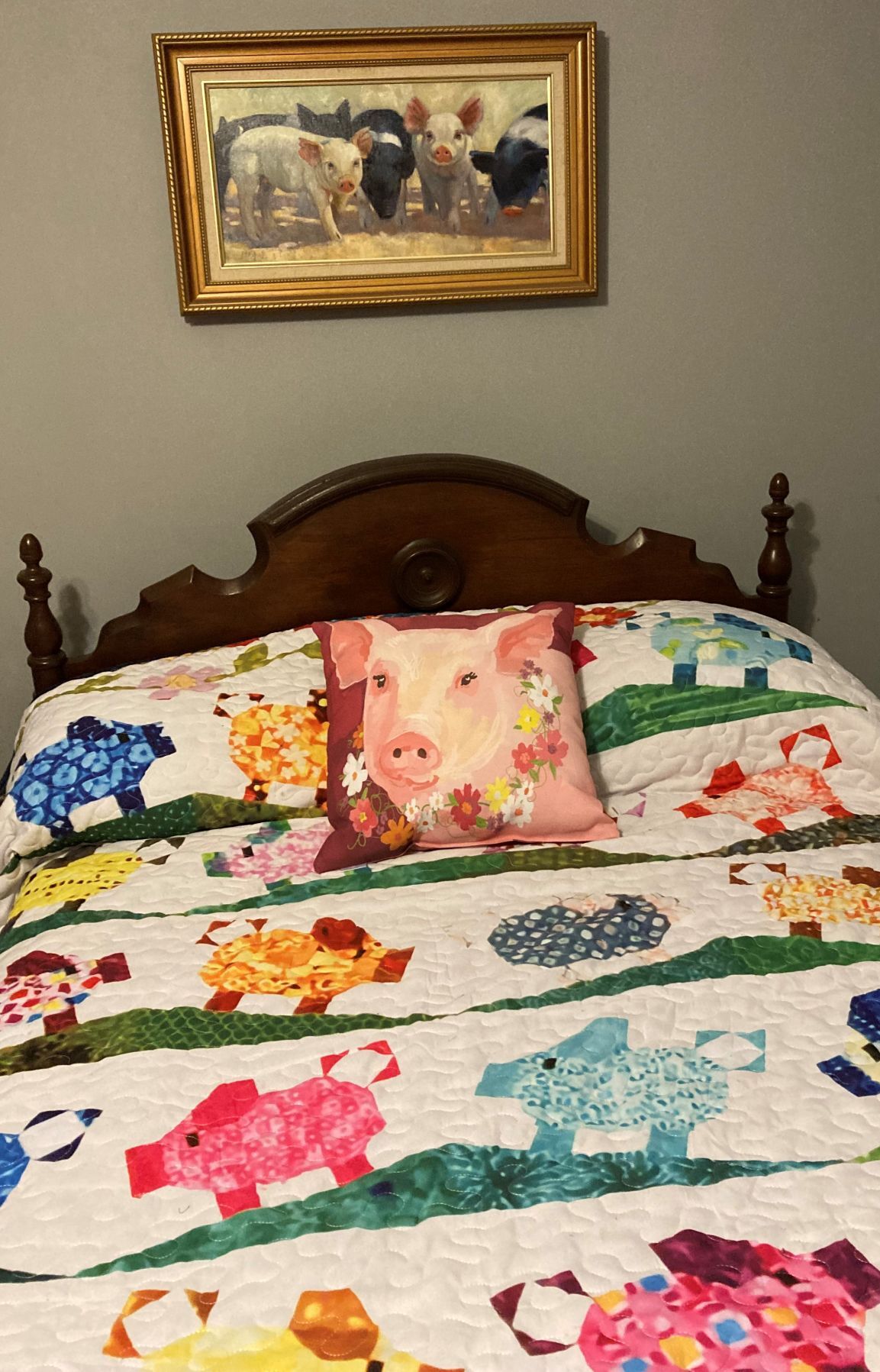 This spread, pillow and picture are all part of Janet Booth’s pig collection.

Janet Booth is pictured with items from her pig collection.

Participants display some of their pigs at a previous convention.

This spread, pillow and picture are all part of Janet Booth’s pig collection.

The upcoming convention is taking place in Cadiz, where Booth was driving through the community one day and happened to spot one of its concrete pigs standing outside the Cracker Barrel restaurant.

Since then the club has been to the community several times and attended its annual Trigg County Country Ham Festival. And this year, following a year without a convention because of COVID-19, the club is returning to the community for its annual gathering in celebration of all things pig-related.

“The interest of the pigs brought us all together, but it’s really a great friendship,” observes Booth, who lives in Nashville. “We look forward to seeing each other every year.”

The club’s members collect pigs of all kinds, from ceramic pigs to pictures of pigs and even piggy banks. Some members have pet pigs, Booth said, and some have the last names of Pigg or Hog.

The 2021 convention is slated for Thursday through Saturday at Lake Barkley Lodge and is kicking off with a dinner on Thursday night. Members will have their yearly show and tell event during the convention, and the 2021 show and tell will honor the club’s late founder, Gene Holt.

Participants have been asked to share a pig or two from their collections that remind them of Holt.

A retired farmer who lived in Illinois, Holt had been collecting pigs for years when he decided that he wanted to connect with other people who had the same interest in pigs as he did, Booth notes.

He began the club in 1975, and it now has 120 members, not only from Holt’s home state of Illinois, but from other states including Texas, Missouri and Kentucky and several other countries as well.

Some members hail from Canada, Italy and England.

Members collect their pigs for a variety of reasons. Booth’s mother sent her “pig things” when she was attending college in Morehead. Booth had grown up on a pig farm and showed pigs in 4-H, she said.

Another member was gifted a pig by his child, jumpstarting his interest in collecting.

Booth noted that Holt’s affection for pigs began when he was a child and visited a larger town in the area for the first time. He took his dime and bought a piggy bank while visiting the town.

Holt died just a few months ago, Booth said, but his son still has that piggy bank.

Some collections number in the hundreds, some in the thousands.

Holt had collected 4,500 pig-related items over a lifetime.

Booth has 2,500 pig items including a bedspread, pig portraits, a picture frame and ceramics.

“Most of us collect anything pig,” she noted, adding that “I (have bought) very few pigs the last few years. But my family and friends give me pigs (for) birthday (or) Christmas. And when someone sees a pig they buy it for me.”

Many of the members’ pig items will be on display at this weekend’s convention, and the public is invited to a Buy, Sell & Trade event that is a part of the annual meeting.

This year’s sale is slated for 9 to 11 a.m. Saturday on the balcony outside of the meeting room at Lake Barkley Lodge. Booth said prospective buyers must wear a face mask in the lodge but may come in from the outside and not have to wear masks if they’d prefer to do so.

The convention also will include a Favorite (COVID) Mask contest at Friday night’s dinner.

Diners are asked to bring a favorite pig-related mask they have worn during the pandemic for a chance to win a prize.

Saturday’s dinner will feature a Best Pig contest, and in a nod to the convention’s location at the lake this year, those attending are asked to bring anything pig- and water-related.

They were given examples, a pig on a boat, a pig surfing or a pig watering can, for instance.

Convention participants are also encouraged to bring pig items for sale or trade.

Or if they have no items to sell, they may buy other members’ pig items.

Additionally, during their visit in the community, they have been invited to look for the concrete pigs displayed around town and stop by the antique stores in Cadiz.

“Who wants to go pig shopping?” a list of convention activities posted on the Happy Pig Collectors Club website asked of its members.

Booth notes that her pig collection is larger because she joined the club.

A member since 1995, she began buying more pigs after she started going to the conventions and seeing other collections.

“I showed pigs in 4-H so I always liked pigs,” Booth said. “I started going to convention to see pigs. I now go to see pigs and then see my friends. We have developed some very close relationships.

“Pigs brought us together,” she continued. “We’ve got some great friendships because of this club.

To learn more about the club, visit happypigcollectors.com.

For information about the Buy, Sell & Trade event, text Booth at jcollinsbooth1@att.net.

Visitors may come to buy, sell or trade pigs from 9 to 11 a.m. Saturday at the Lake Barkley Lodge.