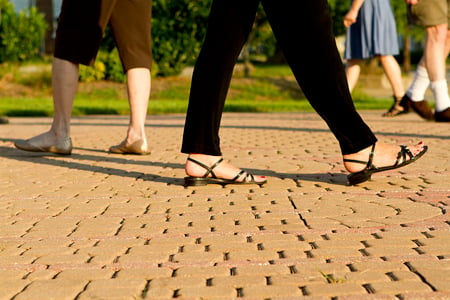 The Rev. Alice Nichols, along with members of Grace Episcopal Church, uses the labyrinth following a service Sunday. 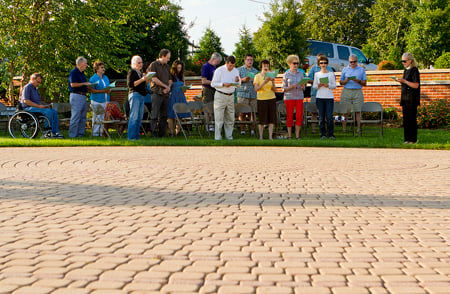 The Rev. Alice Nichols, along with members of Grace Episcopal Church, uses the labyrinth following a service Sunday.

It was nice evening for a walk. But those gathered at Grace Episcopal Church on Sunday evening weren’t taking a typical stroll through the neighborhood. They were on a spiritual journey — a pilgrimage of sorts.

The church hosted a Celtic service in the park across the street from their building. It was open to people of all spiritual backgrounds.

To the unfamiliar eye, the park appeared to be just that — a park with a small, intricately tiled plaza in the center.

But to the Rev. Alice Nichols, that plaza was really a labyrinth, used throughout religious history as a spiritual path one could walk to commune with God and carry His message out into the world.

“The very idea of walking a labyrinth is about having your own experience with God,” Nichols said. “It’s about taking a journey into the heart of God.”

Labyrinths have been used throughout religious history dating back as far as 3,000 years. This church’s labyrinth is an exact replica of one found in France’s Chartres Cathedral, which dated back to 1201 AD, according to a pamphlet from the church. The local labyrinth was commissioned in 2008, constructed out of hand-cut and shaped artistic paver stones and unveiled in 2009.

Nichols suggested people think of the labyrinth as a three-part journey: release, receive and return.

Sunday’s service consisted of a brief informal service accompanied by a six-piece instrument group that included guitars, a violin, a mandolin and a harp. Many of the prayers incorporated ideas and language often associated with Native American poems and prayers.

In the middle of the service, guests were invited to get up and walk the labyrinth. They were led by Nichols. Most joined her in the journey, although a few sat and watched. While they walked, the musicians played soft music to accompany their pilgrimage.

After the walk, the service continued and ended after communion. Guests were then invited to share in refreshments in the church’s garden.

Nichols said she is particularly passionate about making these labyrinth services available to everyone.

“I want to do it for everybody,” she said. “If I could get Sunday school classes or people to call me with groups who wanted to come and do it, I’m ready and prepared.”

In an age where there is a lot of talk of the church “dying,” and people seeming to drift away from the traditional religious practices, Nichols said she sees a growing interests in labyrinths.

“People are still spiritually hungry, even if they’re not interested in coming to Mass or participating in traditional services,” Nichols said. “Labyrinths offer a different way to feed that hunger.”

“I believe this labyrinth was inspired by the Holy Spirit,” said Nichols. “It’s a message that says, ‘This is your journey, this is your way forward, and this is what the world needs — healing and wholeness.’”