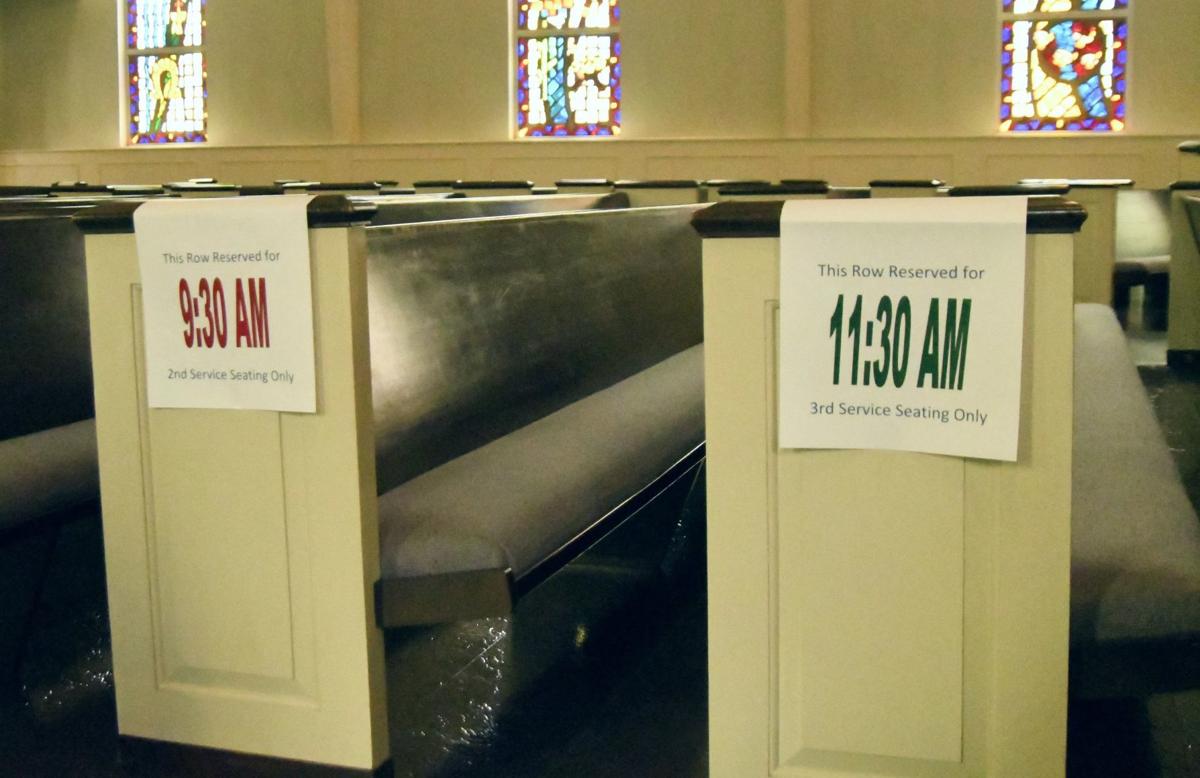 Pews at Second Baptist Church have been labeled for each service in an effort to promote social distancing and to assist in sanitation efforts to help prevent the spread of COVID-19. The church is planning three services on Sunday. 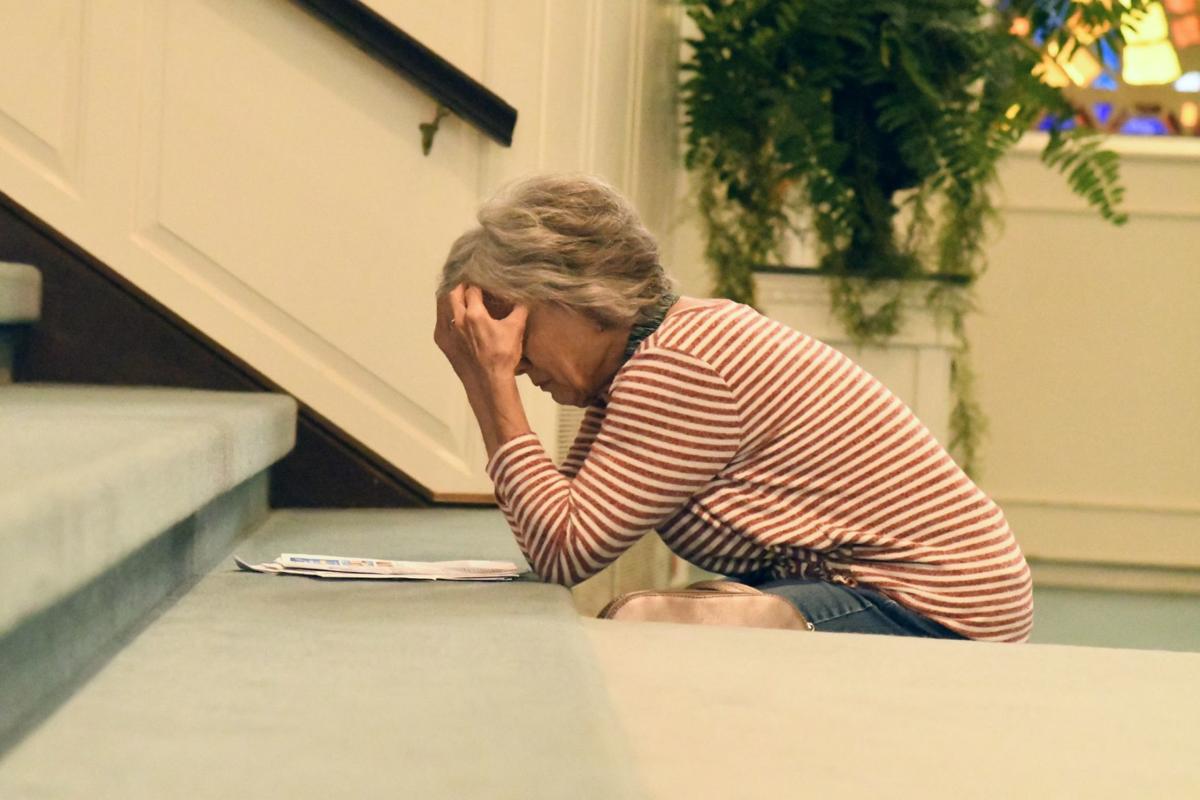 Nancy Hyams, a member of Second Baptist Church, prays at the altar Wednesday afternoon during the church’s Open House Prayer Day. Wednesday was the first day Kentucky churches could be open for in-person worship after a two-month coronavirus shutdown. Second Baptist will hold services on Sunday morning.

Pews at Second Baptist Church have been labeled for each service in an effort to promote social distancing and to assist in sanitation efforts to help prevent the spread of COVID-19. The church is planning three services on Sunday.

Nancy Hyams, a member of Second Baptist Church, prays at the altar Wednesday afternoon during the church’s Open House Prayer Day. Wednesday was the first day Kentucky churches could be open for in-person worship after a two-month coronavirus shutdown. Second Baptist will hold services on Sunday morning.

Some Hopkinsville churches that closed for two months because of COVID-19 are restarting in-person worship services this Sunday, while others are delaying reopening out of an abundance of caution.

Kentucky Gov. Andy Beshear restricted all mass gatherings in mid-March in an effort to protect public health during the coronavirus pandemic. Churches could start reopening as early as last Wednesday following the governor’s Healthy at Work plan for worship centers.

“Our people are at a point where they are ready to get back together,” said David Tucker, lead pastor at Second Baptist Church. “So, we are deciding to get back together because not only is it allowed by our governor, but also has been sanctioned by the courts. We’re in a place where we feel like we can do it safely.”

“I rejoice that it was obviously ruled unconstitutional,” said the Rev. Dr. Joe Bufford, pastor at Hillcrest Baptist Church. “It’s almost scary how quick we gave up meeting without any question about what was being done versus what was being asked. I think if it would have been a request rather than a command, I think there would have been a different attitude and response.

“All that’s behind us, praise God. Hopefully, we’ll never have to do this again.”

Tucker agreed that the time has come to reopen churches and welcome back congregations.

“I think our governmental leaders have done their very best to reduce the risk. We are at a place — with the risk reduced — we need to step forward and start to capitalize on that opportunity,” he said.

Although both Second Baptist and Hillcrest offered virtual sermons and services during the shutdown, the pastors said they believe it is important — and biblical — for congregations to meet in person.

“I think God designed us for relationships — first and foremost with him, as well as with each other,” Bufford said. “If you look at the book of Acts (2:42) one of the four main facets of the new testament church is fellowship … Hebrews 10:25 tells us ‘Let us not neglect the assembling of ourselves together.’ The body of Christ gets to enjoy something that the rest of the world may not understand that God designed us for these relationships. Fellowship is a key integral part of the New Testament church.”

Tucker agreed that worship is different when believers gather together.

Hillcrest Baptist on Skyline Drive is taking online reservations for its two Sunday morning services. As of Thursday afternoon, the 8 a.m. service had about 80 seats remaining and the 10:30 a.m. service was at the allowed one-third capacity of between 200 and 225 people.

Second Baptist on West Seventh Street will have three services on Sunday at 8 a.m., 9:30 a.m. and 11 a.m. Tucker said they estimate about 120 people per service with plenty of room for expansion. The church facility normally seats 800.

Per government guidelines, each church plans to sanitize seating in sanctuaries between services, encourages social distancing and requests their congregations wear masks. Tucker said he hopes these guidelines will be able to be relaxed as the summer months progress and more is learned about COVID-19.

“For the most part I think people are going to understand the reasoning of it,” Tucker said of wearing masks. “We have a lot of at-risk individuals. I don’t want anyone to come through the doors and feel like they are uncomfortable to worship.”

Southside Church of Christ will be waiting an additional week before opening its doors to in-person services. The church at 529 Country Club Lane is planning two services at 9 a.m. and 10:30 a.m. starting May 31 in the Family Life Center and the sanctuary.

Jackson Wells, youth minister, said church leadership wants to make sure their plan for safe services are in place before re-opening. Meanwhile, he hopes other local churches will share their experiences with Southside.

“We’re curious as to what other churches are planning on doing,” said. “We’re going to be able to get some feedback and hopefully people will share what they wish they had done, what they could have done. Hopefully, we’ll be able to apply some of that to ours.”

Wells said they will have prepackaged communion and they are encouraging members and visitors to wear masks, if possible. He said many of Southside’s members are eager to return.

“For some people it’s very, very important,” he said. “We’ve got a wide age (group) that come to our church. We talked to some of the older people of the congregation. They want to get back. They want to see everyone. Then you talk to some younger people who are parents. They’re ready to get back, but they’re also worried about their parents. They are a little bit more wary.”

Balboa said they are taking extra precautions because Freeman Chapel’s congregation consists of primarily older minority members, who are at higher risk for contracting the virus. With a capacity of 250 people, Balboa said on average 50 to 60 individuals attend the church regularly.

During the pandemic shutdown, Balboa said they have been conducting services on social media and radio segments each Sunday. She said they will not rush to return to in-person services.

“We’re getting ready to come upon Pentecost. God told the disciples they had to stay in the upper room until the Holy Spirit told them to come out. He said ‘just wait,’ ” she said. “We’re at a waiting place right now.”

Members of Grace Episcopal Church on Sixth Street may have to wait until mid-July to assemble depending on the decision of the Diocese of Kentucky.

“We are under the auspices of the Bishop of Kentucky and he has informed us through a pastoral directive that we are not to have any in-person services or in-person gatherings of any nature until he lifts this directive,” said The Rev. Dr. Robert Clarke, pastor of Grace Episcopal. “The directive at this time will last until July 1. We will not be having any in-person services until some time after that.”

Clarke said the diocese is following guidance outlined by the Centers for Disease Control.

“As a diocese we are following the CDC protocol which requires at least two weeks of a downward trend of new cases,” he said. “In western Kentucky, we are nowhere near that yet.”

Clarke said the church is preparing to follow CDC and the governor’s instructions when regular services resume. He said the sanctuary seats about 140, but their normal attendance hovers around 60 members and visitors.

“We are asking people who are ill not to come. We are asking the elderly or those at-risk not to come — at least in the beginning,” Clarke said. “We probably will not have a choir because it turns out singing projects the virus. The first several services will not be a mass or a Eucharist. They will likely be a morning prayer and a sermon because we have yet to figure out how to administer communion.”

Meanwhile, the church has been and will continue to broadcast services via Zoom, on the church website and on YouTube. Clarke said he recognizes the importance of the electronic and technical age, but virtual services are not the same as being in church.

“I think it’s important because we’re human beings,” he said. “Ever since the moment you’re born, your body becomes accustomed to touch. Your body becomes accustomed to being seen and seeing others. Even though we won’t be shaking hands or hugging for the foreseeable future, I think hearing collective voices in prayer rather than over a TV screen or a computer screen — to see and hear each other — reinforces a sense of community and our own senses of humanity.”