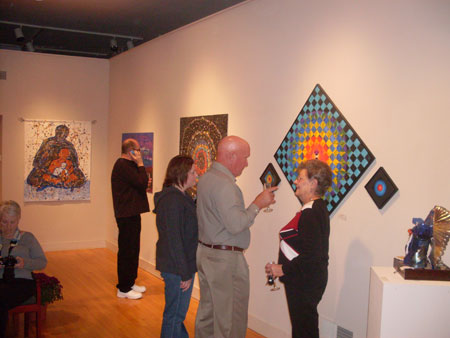 Patrons talk during the opening of Tessier’s exhibit Oct. 21. 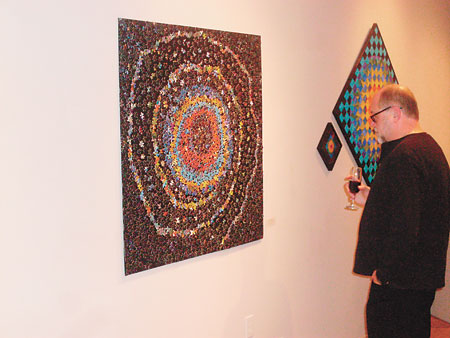 Lacy Long looks at a Tessier piece titled “Who is Both/And.”

Patrons talk during the opening of Tessier’s exhibit Oct. 21.

Lacy Long looks at a Tessier piece titled “Who is Both/And.”

CADIZ, Ky. —  With her new exhibit at the Janice Mason Art Museum, Jeanne Tessier wanted to produce images that asked questions about the human relationship to God.

“Right now in U.S. culture, religion has become such a divisive thing,” said Tessier, 64. “I wanted to use images that people could use to reach across their differences and find things they could agree on.”

Tessier opened the exhibit, titled “Face of God,” on Friday. It is made up mostly of paintings, mixed media and found object art, with each image exploring a different aspect of her relationship with God.

In one work, titled “Who is Love Eternal?,” Tessier painted an impressionistic image of a parent holding a child, with many smaller images of children painted within.

In another, titled “Who Erases All Our Sins,” Tessier supplies a chalkboard with the words “Write sins below_erase_it’s what I do” placed together in Scrabble pieces above.

Just down the wall is another piece titled “Some Assembly Required II” with a board filled with 36 blocks and an ironing board beneath it. Each block has a different photograph on each of its sides.

“(The piece) invites people to pull (the blocks) out and say what speaks to them of God,” said Tessier. “The ironing board is so they will hopefully pull the blocks out and play with them.”

There are 27 pieces in the show, most of which have been made in the past few years. She said she wanted the exhibit to cross over religious boundaries.

“I really wanted to create a mix that Muslims, Jews, Christians, even Buddhists could come in and say, ‘yeah, this is good,’” she said.

Tessier is a former professor who worked most recently at Spalding University in Louisville, teaching classes in communications and religious studies. She moved to Cadiz three months ago to be closer to her brother, Bob.

Tessier has made art since she was a girl. She said she has had several exhibits over the years, including one at the Mason museum in 2009. For the “Face of God” exhibit, she said she recreated several pieces that sold in the 2009 show.

Paula Lisowsky, an administrator at the Mason museum, said Tessier asked to have another show and they happily agreed. Lisowsky said she thinks the exhibit is very thought-provoking.

“It leaves a lot of questions unanswered,” said Lisowsky. “It gives viewers a chance to experience their own spirituality through (Jeanne’s) eyes.”

Tessier said she has always enjoyed the process of making art.

“Art is always very personal,” she said. “One of the things that I grapple with in terms of making art and putting prices on things is that the true gift of art is in the making of it. But at the same time, you make something, you want someone else to look at it.”