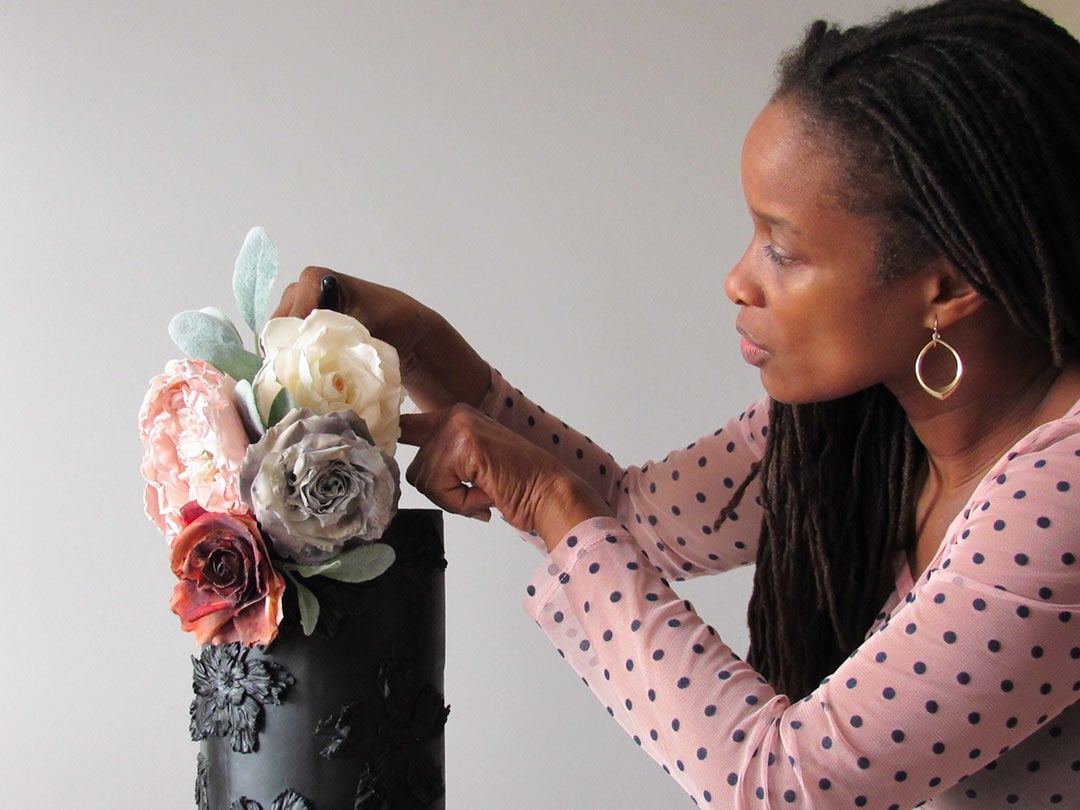 Chaka Dunn, of Hopkinsville, adds flowers to the top of a multi-layered cake. Dunn is a semifinalist in The Greatest Baker online competition for 2020. To help her reach the finals, vote for her at https://great estbaker.com/2020/chaka. Finalists will be determined on Thursday. 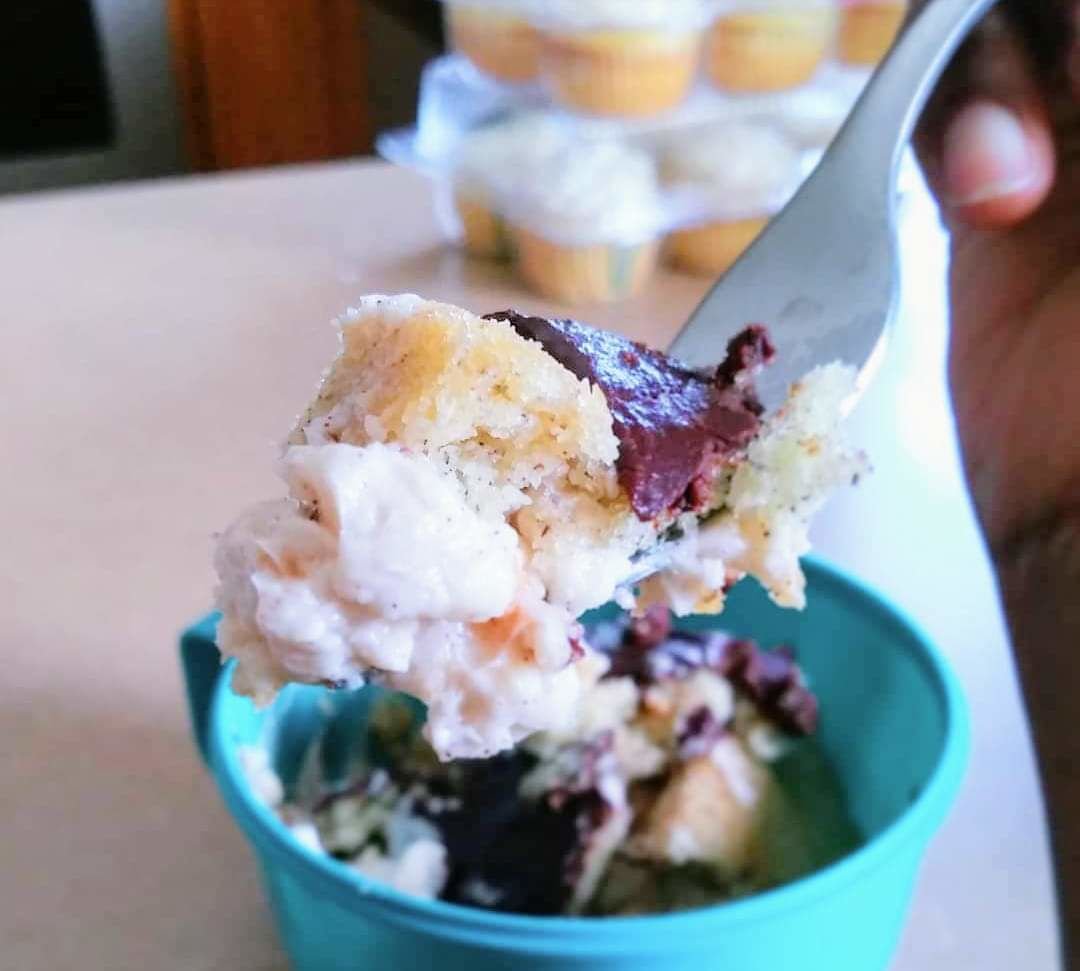 Chaka Dunn, of Hopkinsville, adds flowers to the top of a multi-layered cake. Dunn is a semifinalist in The Greatest Baker online competition for 2020. To help her reach the finals, vote for her at https://great estbaker.com/2020/chaka. Finalists will be determined on Thursday.

The Hopkinsville baker learned how to crochet clothes with instruction from her mother, who studied design. To crochet an outfit that would flow like material could take up to three months.

Dunn brought her knowledge of clothes design into the kitchen when making cakes for her family.

“I was able to dress a cake in less time than I can make a dress. It was just as gratifying,” she said. “Fashion and clothes have always inspired me. I think that’s how I approach cake making — it’s a fashion show. I take a lot of inspiration from nature, from fabric. I love textures. I also love to just tell a story.”

Dunn has taken her passion in the kitchen to a global level. She is a semi-finalist in The Greatest Baker, the world’s largest online competition for bakers. Dunn is competing against bakers across the globe for a prize package valued at $25,000.

“It’s international,” Dunn said. “This is the first time I’ve ever done anything like this. I guess I’m just going big.”

To enter, Dunn submitted photos of her with her cake design creations to showcase her work.

“It wasn’t hard to get in, but it’s hard to stay in,” she said of the contest.

The public started voting for her at https://greatestbaker.com/2020/chaka and she advanced through the contest levels.

As the competition enters week five, public voting will determine one winner from each semi-finals group that will advance into the final round. Finals start Friday and end Dec. 10.

“This week and next week I have to stay in first place to finish the race,” Dunn said.

Twenty years ago, after her husband Ellis Dunn completed his service with the U.S. Army, the couple moved to Hopkinsville.

Dunn said her family has encouraged her to continue her love for cake design and Ellis has helped her to perfect her craft.

Designing cakes, Dunn said, often is inspired by something she has seen or how she feels at the time.

“That’s why I look at it as art and sugar play,” she said.

Baking her own cakes confidently required encouragement from key people in her life, including a woman at her church and Verna Chlupsa, also known as The Cake Artist in Cadiz.

“She was so encouraging,” Dunn said. “She amazed me. She said ‘you can do this. Anyone can do this.’ At that time, I didn’t believe it, but that stuck in my head.

“Now, I’m really about design and the art of sugar.”

For a while, Dunn wrote on her “Des Tremon Unrefined” blog about her passion, but when the coronavirus hit last spring, she was unable to continue blogging on her website.

Soon she began to look for other ways to express herself on the advice of a friend. Shortly after that she entered The Greatest Baker contest.

Dunn is among 16 contestants in her The Greatest Baker contest group. There are four groups of competitors, which were organized by the contest sponsors.

Competitors in the contest are essentially “elected” using free daily votes that are cast by their supporters. Similar to an election, contestants with the most votes by the end of the weekly voting cycle will advance to the next round.

To help Dunn reach the finals, supporters may vote once every 24 hours or they can cast a “Hero” vote if they wish to vote more than once per day.

“The Hero votes really do hold a lot of weight,” she said. “The more people voting, the better chance I have of making it.”

Money raised during the contest through “Hero” votes that can be purchased by supporters, benefits the No Kid Hungry Foundation, a 501©(3) charity.

“They are actually helping feed children in America,” Dunn said. “It’s encouraging to know that I’m a part of helping this foundation.”

Dunn is hoping for the support of the Pennyrile community — and beyond — to help her advance.

“You want to support me? You vote for me; you keep me in the race,” she said.

Voting ends at 10 p.m. Thursday. Finalists will be announced by Friday afternoon.

The grand prize winner receives worldwide recognition as The Greatest Baker of 2020, a year’s supply of Stuffed Puffs, he/she will also be featured in Bake from Scratch Magazine, and take home a $10,000 honorarium, according to the website.

In addition, the first place baker will receive a trip to Pennsylvania to spend a day-in-the-life with Stuffed Puffs CEO Michael Tierney.

If she wins, Dunn said she wants to build her social media platform, continue her blog, and instruct the community in cake design.

“I want to teach others to find themselves in sugar,” she said. “It’s an art. It’s very freeing and fun. I started out in my kitchen making box cakes, not knowing anything. If there’s something I can do to encourage and teach and share, social media is definitely a platform to do that on.”

Eventually, Dunn said she would love to have a cake studio in town to host workshops with a therapeutic atmosphere “to share and create things” with her customers.

“That’s where I feel happiest, when I’m creating,” she said. “Winning would allow me to branch out, share my craft and inspire others of all ages and from all walks of life to explore art using sugar.”