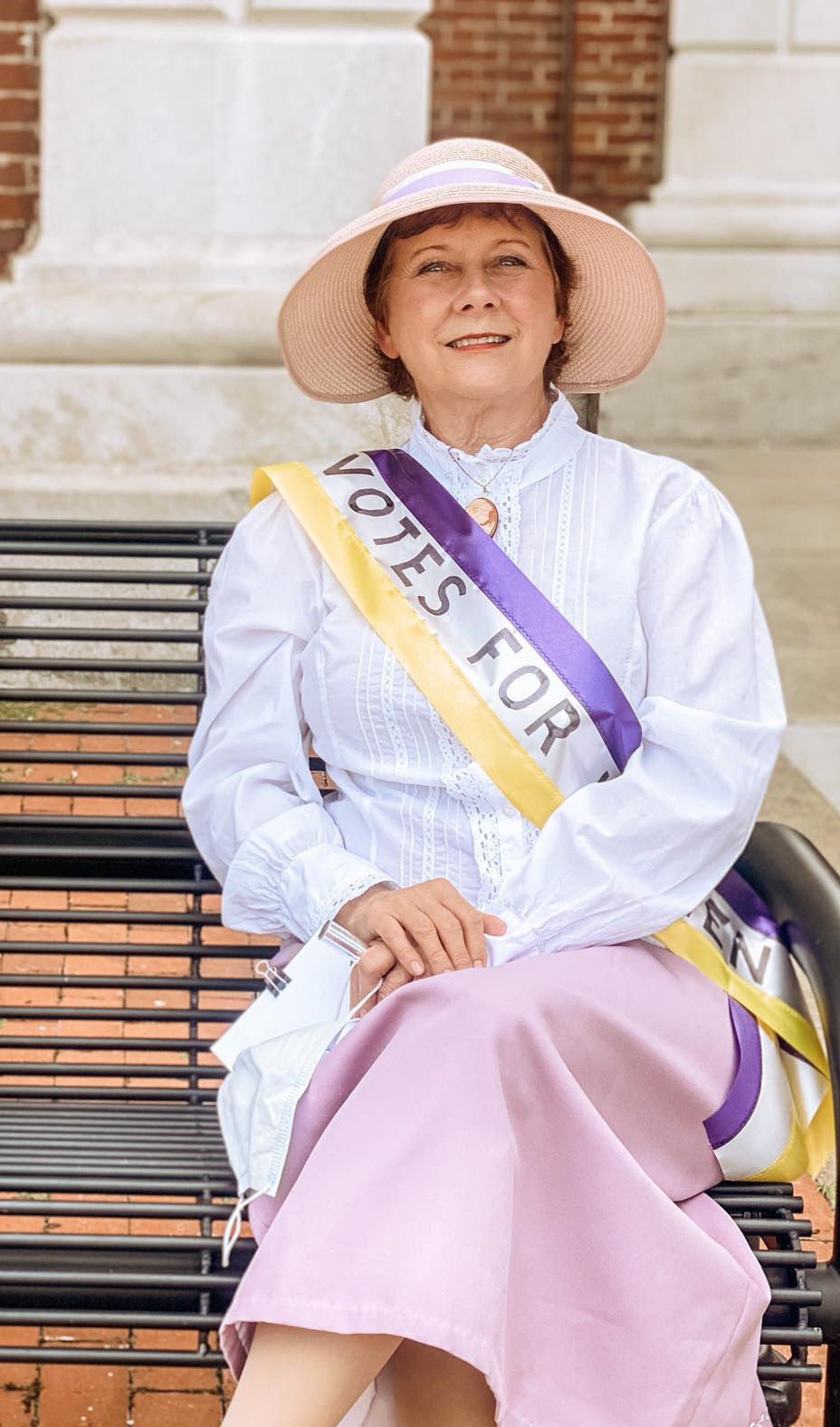 Local actress Charlotte Hendricks will portray Hopkinsville native Mary Edmunds Bronaugh in a reenactment during a ceremony Dec. 5 to dedicate a Kentucky Historical Marker in her honor. Bronaugh was the first female from Christian County to be admitted to the Kentucky Bar Association and became one of the first women attorneys in the state. 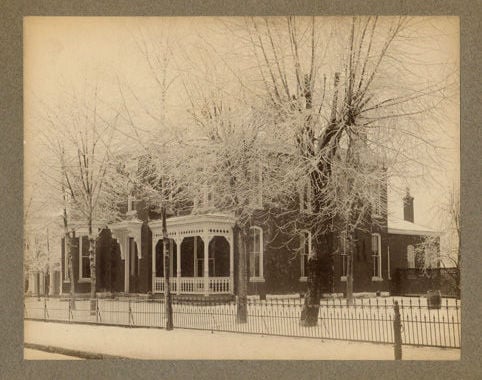 The house of William and Mary Bronaugh House is pictured at 1615 S. Main St., circa 1885-1964. Women’s suffrage pioneer Mary Edmunds Bronaugh spent much of her childhood and some adult years in this house before it burned.

Local actress Charlotte Hendricks will portray Hopkinsville native Mary Edmunds Bronaugh in a reenactment during a ceremony Dec. 5 to dedicate a Kentucky Historical Marker in her honor. Bronaugh was the first female from Christian County to be admitted to the Kentucky Bar Association and became one of the first women attorneys in the state.

The house of William and Mary Bronaugh House is pictured at 1615 S. Main St., circa 1885-1964. Women’s suffrage pioneer Mary Edmunds Bronaugh spent much of her childhood and some adult years in this house before it burned.

A pioneer in the women’s suffrage movement and a trailblazer in the legal profession, Hopkinsville native Mary Edmunds Bronaugh forged her own path in life and paved the way for others.

In honor of Bronaugh’s achievements, the Hopkinsville League of Women Voters will be dedicating a Kentucky Historical Marker in her honor with a ceremony at 11 a.m. Dec. 5 at the Christian County Justice Center, 100 Justice Way.

“Because of her efforts 100 years ago — in several ways she worked to better the community,” said Henrietta Kemp, LMV president. “She did lots of things at an early age that we think are beneficial. She had a lot of characteristics that we admired.”

Kemp noted that Bronaugh will be the first woman in this community to be honored with a state historical marker.

“We realized that there are no other markers in Christian County recognizing women,” Kemp said. “There are 22, I believe. Some are for buildings, but most of them are for men.”

With this marker, Bronaugh joins psychic counselor Edgar Cayce, journalist Ted Poston and U.S. Vice President Adlai Ewing Stevenson, who each have markers in Christian County. Other markers include the Hotel Latham, Grace Episcopal Church and The Trail of Tears, located at the commemorative park.

Although he will not attend the ceremony because of the coronavirus pandemic, family member Bill Edmunds said he is pleased Bronaugh is being recognized. Edmunds, a Hoptown native and resident of San Diego, is Bronaugh’s first cousin once removed on his father’s side of the family.

“I greatly appreciate it,” Edmunds said about the historical marker. “She is a woman who certainly deserves mention.”

Hoptown rootsBorn in Hopkinsville in 1885, Bronaugh was the only child of William Venable and Mary Bronaugh.

The family lived at 1615 Main St. in a home built by the couple. According to New Era archives, the Victorian Italianate-style house “was one of the very few houses in Hopkinsville that was built, furnished and lived in by just one family during its entire history.”

The Bronaughs spent most of young Mary’s childhood in Christian County, but she attended high school in New York.

While there, in 1902, her father, a lieutenant commander in the U.S. Navy, was aboard the battleship Kearsarge in the Brooklyn Navy Yard when he committed suicide, according to New Era archives. He was brought home and buried in Riverside Cemetery.

MilestonesBronaugh forged on with her education, graduating from the University of Chicago Law School in 1915 with honors. She was the first female from Christian County to be admitted to the Kentucky Bar Association and became one of the first women attorneys in the state.

According to the Kentucky LWV, in the early 1920s Bronaugh played a pivotal role in helping Kentucky women to gain the right to vote and the ratification of the 19th amendment.

“We found that Mary Bronaugh was very instrumental in the suffrage movement,” Kemp said.

The Courier Journal reported that on March 20, 1920, Bronaugh was one of 21 members of the Kentucky Equal Rights Association who warned that “male political leaders would be ‘out of luck’ if they opposed granting suffrage to women,” according to historical archives.

Months later, on Aug. 18, 1920, the 19th Amendment, also known as the “Susan B. Anthony Amendment,” passed the Senate and became effective eight days later. As a result, almost 27 million American women were given a voice in the U.S. government.

Soon after, Bronaugh helped to create Kentucky’s chapter of LWV and eventually became its first president.

According to the KLWV, in 1921 Bronaugh lobbied for the passage of the Sheppard-Towner Maternity and Infancy Act, which was legislation to combat elevated mortality rates among mothers and newborns.

Just six years later, on Christmas day in 1927 tragedy struck again. Bronaugh and her mother were dining at the Hotel Latham in Hopkinsville when her mother had a stroke and died at the dinner table.

“She had her troubles in life, but she overcame everything that was put in front of her,” Edmunds said.

In the 1930s, Bronaugh became a voice for a federal Equal Rights Amendment and served as an officer of the Kentucky Federation of Business and Professional Women.

During World War II, she became regent of the Hopkinsville Daughters of the American Revolution chapter.

“She just kind of lived life on her own terms,” Edmunds said. “I admire that because it would have been so much easier for her, honestly, to just live in Hoptown. She took the road — more like a path — less traveled.”

Bronaugh spent her last years of life as a semi-recluse in Hopkinsville.

“Tall and slender, Mary wore lots of makeup,” according to New Era archives. “She was fond of voile dresses and large straw hats, which she was frequently seen wearing while driving her 1948 Nash four-door sedan around town.”

On Feb. 20, 1964, as the result of a Bethel College boarders’ prank, the vacant Bronaugh house on South Main Street burned to the ground with all of its furnishings and family memorabilia, according to New Era archives.

“The burned-out shell stood there for about three years, until 1967,” according to the article.

“Houses of this style and time period sometimes didn’t have exterior shutters, but there were interior louvered shutters on all of the windows,” according to the New Era. Edmunds said he recovered some of those shutters and has stored them at his California home.

When he was a teenager Edmunds said he and his father, former Christian County Judge Executive the late William F. Edmunds visited Bronaugh in her senior years.

“I remember her,” he said. “Dad and I would go visit her in the nursing home in Pembroke. I remember Dad talking to her. She was sharp. Obviously, she was a very smart lady. She was always the trailblazing woman in the family.”

Bronaugh died in 1973 and also is buried at Riverside Cemetery in Hopkinsville.

Marking historyDuring the Dec. 5 dedication ceremony, Kemp said the LWV will share the process involved in obtaining Bronaugh’s historical marker and thank donors who made the recognition possible.

Local actress Charlotte Hendricks will portray Bronaugh in a reenactment of her accomplishments.

“She’s going to talk about her life,” Kemp said. “She has a little bigger story now. She’s talked to some of Mary’s family members.”

Edmunds said he hopes his cousin’s accomplishments and leadership will be recognized in local classrooms as well.

“I hope history teachers use her as an inspiration,” he said.

Kemp said this will be the capstone event in the LWV’s yearlong celebration of the 19th amendment’s 100th anniversary.

“We hope that it highlighted the importance of voting in this very important election year and the struggle people went through in order to vote,” she said.