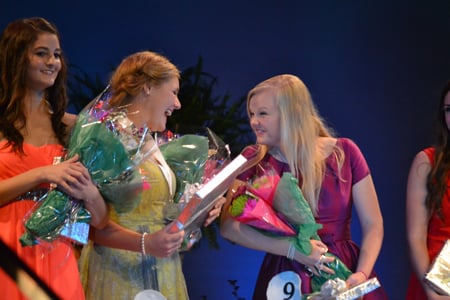 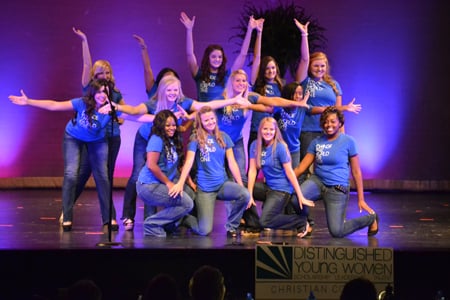 All 13 contestants pose after their opening number for the Distinguished Young Women scholarship program in August 2013.

All 13 contestants pose after their opening number for the Distinguished Young Women scholarship program in August 2013.

Fourteen contestants competed for the title of 2014 Distinguished Young Woman of Christian County.

There were no boisterous evening gowns or baring swimsuits, and the contestants had more than pretty faces to offer.

Many held titles in their school’s honor societies and clubs. Some had lead roles in Campanile productions and a few competed with title-winning dance teams, while others were involved in church and community groups.

With a long list of accolades among the group, the competition was stiff.

The high school girls started the show with a fitness routine, which counted for 15 percent of their score.

Alexis Harper, a student at Hopkinsville High School, won the fitness award as well as the scholastic award and first runner-up.

Talent routines dominated the next part of the show and 25 percent of the score. Some sang original songs while others danced, played the violin or recited monologues.

Cali Newton, who attended fashion camp in New York City this summer, drew a live fashion illustration to a music medley. She was named fourth runner-up.

Annie Arnold, who has been dancing since she was 4, won the talent award for a ballet-Pointe routine called “Bella’s Lullaby.” Arnold also won the self-expression award and third runner-up.

Before Saturday night’s show, the girls had individual interviews with the judges, which was 25 percent of the score.

Anna Beth Riggs, who is founder and president of the Movement Club at Heritage Christian Academy, took home the interview award and spirit award. She was also second runner-up.

At the end of it all, 17-year-old Gretchen Powell was named 2014 Distinguised Young Woman of Christian County.

Powell is the vice president of the National Honor Society at University Heights Academy, a member of the academic team, Beta and Key clubs, and she is on the tennis and cheerleading teams.

A big crown wasn’t placed on her head, but she was recognized with flowers and a sash.

Powell said it was her first time competing in a “pageant,” and she was surprised to win.

“I enjoyed the program so much, and it means the world to me to represent Distinguished Young Women,” she said.

Weeks before the show, the contestants worked on a community project with Ordinary Hero, an organization that helps the impoverished in Ethiopia. The charity was started by a Hopkinsville native named Kelly Putty four years ago.

The girls helped fill “Blessing Bags” that include a shirt, pants, underwear, socks and a host of other items.

Putty, who now lives in Brentwood, Tenn., said she was touched by the girls’ willingness to give back.

“When I was dancing on this stage 22 years ago, I wasn’t thinking about helping children in Africa, but these girls are,” she said.

Powell said in her role as Distinguised Young Woman she wants to set a good example for her peers and encourage more girls to participate next year.

REACH ZIRCONIA ALLEYNE AT 270-887-3243 or zalleyne@kentuckynewera.com.