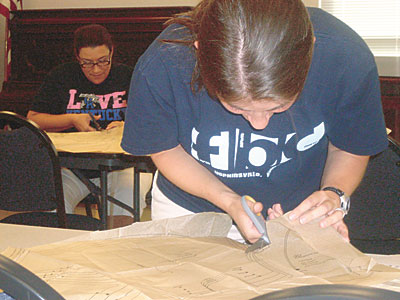 Erin Westerfield cuts out her pattern as Alicia Zieman does the same. 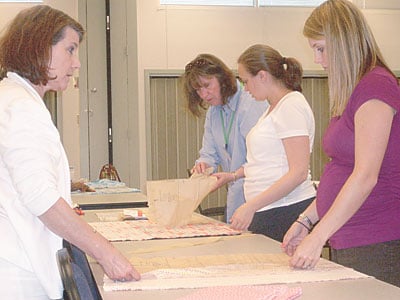 Erin Westerfield cuts out her pattern as Alicia Zieman does the same.

Anita Tomberlin can hardly remember a time when she didn’t sew.

Tomberlin learned to sew from her mother when she was very young and would make outfits for herself when she was in high school. She said she would often make a new outfit each week.

“I was just a big fashion person,” Tomberlin said. “I liked nice clothes and my parents didn’t have much money so I made them myself.”

Tomberlin now works as a master clothing volunteer through the University of Kentucky and teaches classes around the state on making clothing. She is offering a class called “Sewing for your Child” on Tuesdays throughout June at the Christian County Cooperative Extension Office.

The class focuses on making children’s clothes. Tomberlin said class members will focus on making a child’s sundress. During Tuesday’s class, participants cut patterns for their design and started to assemble their dresses on sewing machines.

Seven participated in Tuesday’s class but Tomberlin said 12 registered for it. The class is free and since it focuses on children’s clothing, she expects it to be very popular. Tomberlin thinks there is great economic value in learning to make clothes.

“It depends on the fabric, but you could see a $50 dress and make it yourself for $10,” Tomberlin said.

In other clothing classes, Tomberlin has taught how to make skirts for Christmas trees and Christmas stockings. She thinks of clothing-making as an art form.

“It’s creative and it is really engineering,” Tomberlin said. “You have parts and you assemble them and it becomes something. You create something.”

One class member, Jeanine Cunningham, has six-month-old and eight-month-old granddaughters and plans on making outfits for them with the skills she learns in class. Cunningham said she has sewed in the past but needed a refresher course.

“(The class) is excellent,” Cunningham said. “It is free and they are donating their time and that is a wonderful thing in this day and age.”

Another class member, Alissa Keller, learned to sew in fifth grade but said she hasn’t kept up with it much as she has gotten older. She’s been interested in making children’s clothing and thought the class would be a useful tool in learning.

“I like to learn these handy skills that are dying out,” Keller said. “I’m interested in keeping those traditions going.”

Registration for the class is closed.