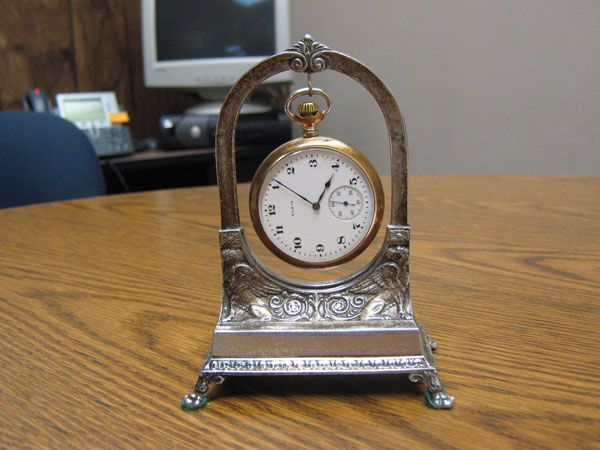 Lloyd Lancaster, a Trigg Countian, used this watch during his long career with the New York Central Railroad. 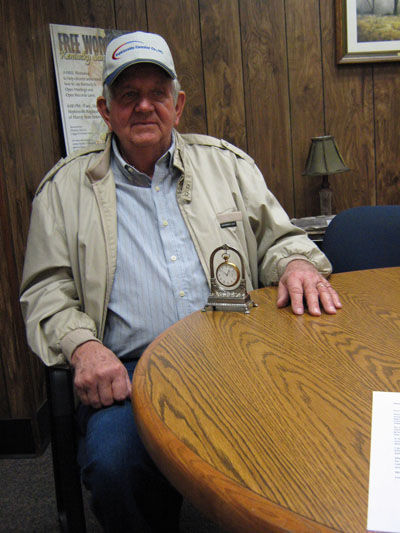 Lloyd Lancaster, a Trigg Countian, used this watch during his long career with the New York Central Railroad.

Early in the 20th century, a young Lloyd Lancaster left his family and home in Trigg County to build a life in New York City, where he was employed by the New York Central Railroad.

Lancaster died in 1965, just shortly after retiring from a career that spanned about a half of a century with the New York Central.

To celebrate retirement, he and his wife took a vacation to Florida and while there he became ill and died shortly thereafter.

This past December, a part of his legacy returned to Kentucky in the form of a gold watch.

It’s thanks to our neighbor Donnie Dixon, who dropped by the office one recent snowy day and told us about the watch.

We contacted Harold Lancaster, who is a nephew of the owner of the watch, and he was kind enough to tell us the story.

Accurate time has always been of great importance to the railroad industry. Agents, engineers, everyone involved watched the clocks and their watches, all of which were the finest available and dependable.

The Lancaster timepiece had been passed down to Larry Lancaster, first cousin of Harold.

Larry Lancaster recently retired following a long career as a professor at Vanderbilt University in Nashville.

He had no heirs, and wanted the watch to remain in the family.

In December, Harold received a letter from his cousin.

“It was a complete surprise,” he told us. “Larry said the watch was given to our grandfather by his oldest son, our Uncle Lloyd,” Harold said.

Lloyd had left Trigg County for New York at an early age and only returned for annual visits.

As a young boy, Harold remembered those trips and his uncle’s stories about the railroad.

Cousin Larry had the watch cleaned and some movements repaired or replaced, and it runs well.

In his letter, cousin Larry said, “If I keep it, it would most likely end up in a pawn shop or estate sale, and be bought by some complete stranger. I would like for it to stay in the family.”

Harold was greatly pleased to receive the watch, which is displayed on an ornate silver frame.

Harold and his wife, Wanda, live on Woodburn Hay Road, and he is still engaged in farming.

“I want my grandson to keep it,” he said.

In the family trend of passing the watch to the youngest, Harold’s grandson, Jacob Aaron Newby, will be the keeper of the watch.

He is the son of Kentucky State Trooper Jason Newby and his wife, Tina, and he has an older brother, Jacob, and a sister, Lacie Beth.

The grandson is 11 years old, but his grandfather said, “He was excited about the watch.”

The watch is a reminder of the times when our trains managed to run on a tight schedule, timed by big clocks on the railroad station walls and the many gold pocket watches worn by depot agents, conductors, engineers and just about anyone who worked for the railroads.

It isn’t known if Mr. Lancaster’s golden Elgin watch was issued to him or he purchased it, but it appears to be worn smooth from many years of use.