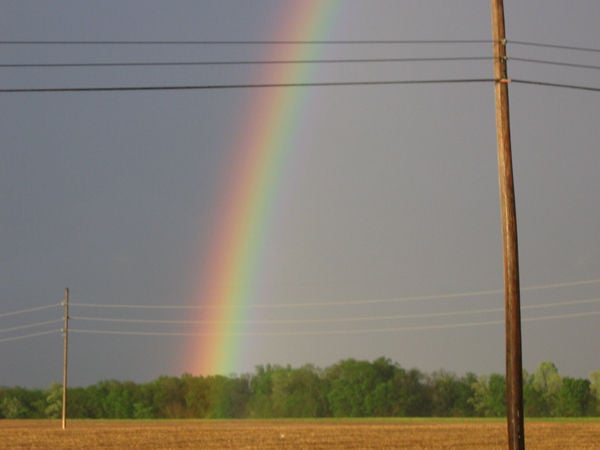 A bright rainbow arched high over the Pembroke Road on Sunday afternoon. 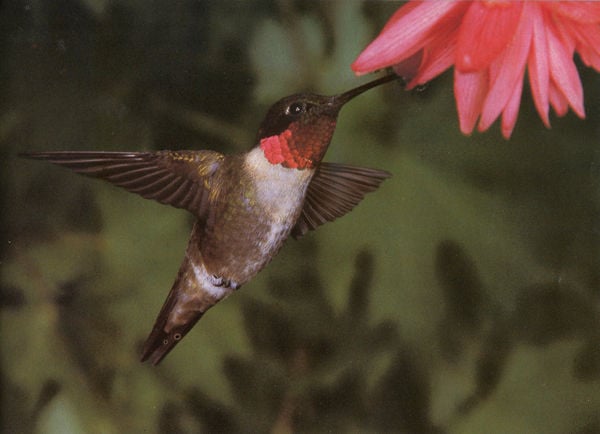 The hummingbirds have made their annual return to Kentucky.

A bright rainbow arched high over the Pembroke Road on Sunday afternoon.

The hummingbirds have made their annual return to Kentucky.

On the exact day the hummingbirds were scheduled to fly in from Central and South America, the first one was reported at a friend’s house.

We then got busy boiling bird water and getting the feeder ready to go.

The next morning there was our first tiny little bird back in Kentucky and enjoying his sweet water breakfast. Later in the day another one arrived and by the past weekend we had more than we could count and their behavior wasn’t changed as they fought over the feeder more than drinking from it, all of which is interesting to watch.

Their aerobatics are amazing and we are just holding our breath that none slam into the walls of the little sun porch. It has happened several times before.

What is amazing to us is that all those feral cats we’ve been telling you about are around usually to eat several times a day. During those times, all birds leave, except the little hummers who — with all their bravado — pay no attention whatsoever to the cats, and the cats don’t seem to notice them. Perhaps they are two small for a decent cat meal.

The joy of seeing the world come to life and become green again is great, and flowers and flowering trees have been so beautiful in the past few weeks.

We had a row of red tulips across the back of the house. They all bloomed at the same time, and for two days we enjoyed their beauty. Just two days and then we awoke to look out at the tulips, and all were gone.

The evidence was there. Although, we’ve had no deer in our yard for many months, footprints in the soft soil left no doubt that a deer had come right to the back of house and had eaten every single tulip.

The next day neighbor Carol called. She had planted dozens of pansies in large planters on her patio. It seems the pansies served as the deer’s second course. Every blossom had been eaten.

Carol was searching for a solution before planting any more flowers. We discussed tales about human hair keeping deer away. We had tried that years ago – getting hair from the beauty shops and sprinkling it around our vegetable garden.

Then we heard about fox urine, so we bought some.

That seemed to work at least with the squirrels which that year were causing the problem.

Carol has heard of coyote urine, so she is going to try that.

We have decided that is too pricey, so we are going to bury moth balls around flowers in our pots. Wish us luck. Country living is some times challenging.

For instance, Saturday seemed to have been “service the air conditioners” day. We were doing that as were the neighbors who, when they opened their unit, were more than surprised to find a large snake in the unit.

And then there are the cats. One of the kittens born last spring looks like she’s about to deliver any day now, and old Speedy has already given birth, but we haven’t seen the kittens yet.

About every night we hear cat fights in the woods.

It seems that Sweet Face needs a new name. It’s definitely a male and probably instigating some of the fights.

So, spring is here. The green, green grass of home is so lush and beautiful and the hummingbirds kept their promise to return, and then on Sunday afternoon came the unexpected, most beautiful thing.

As we were driving into town just after a hard rain with dark clouds still rolling in front of us, the sun came out behind us and there it was: the most brilliant and beautiful rainbow imaginable. It appeared to arch high in the heavens from toward Fairview and over the Pembroke Road and seemed like it was coming down right behind our house.

We were blessed by the beauty of the rainbow, but as of yet haven’t found the pot of gold.