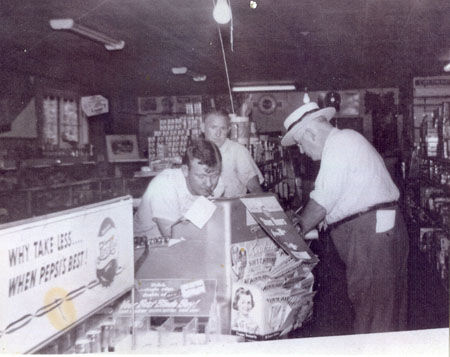 It was 1954 and the late Jack Haddock is shown doing business with a salesman (the man in a hat) at the counter in Haddock’s grocery store. 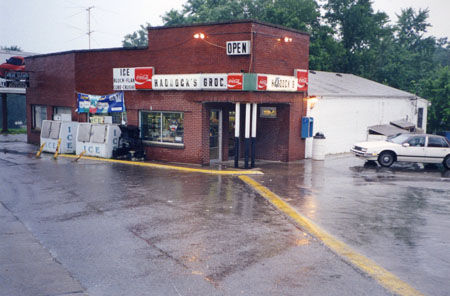 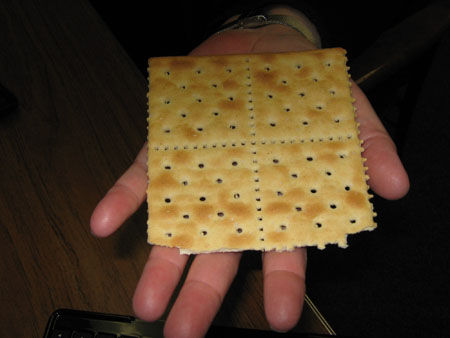 It was 1954 and the late Jack Haddock is shown doing business with a salesman (the man in a hat) at the counter in Haddock’s grocery store.

At one time there were 58 grocery stores in Hopkinsville with most of them family owned.

One was Haddock’s Grocery, and that popular local business is still going full steam with Jim Gardner as the owner and operator.

Haddock Brothers was first opened in 1930 by Ennis Haddock, who was taking a big risk as the nation was struggling through the beginning of the Depression years, and people had little money to buy anything, even groceries.

The store is legendary, having been known for its great lunch-time sandwiches, great butchers and even a lot of fun — which for a time involved a “mongoose” in the store and a groundhog in the restroom.

For those who enjoy a souse sandwich — a slide of pork made from snouts, feet and other parts of the pig — you can get it there.

Remember when bologna tasted better on a four-square saltine cracker? Well, Jim says they are back.

“For a time, I couldn’t get them, but we have them now, and they are popular with our customers.”

Need a 50-pound bag of popcorn? Haddock has it. They also boost of being the only place in town that sells big 25-pound bags of ice.

We visited the store last week, and I guarantee you they have an interesting inventory. We saw everything from toothbrushes to a toilet plunger, along with a wide variety of groceries.

It takes five women working different shifts and different days to handle making the Haddock’s sandwiches many customers enjoy for lunch. Gardner says the sandwiches are so good because of fresh bread and original Miracle Whip spread.

Anna Lyle, Brenda Hanson, Katie Burkhead, Regina Burkhead and Annetta Brown are the sandwich makers, and among the sandwich lovers is the store owner.

Jim said, “That’s what I have for lunch every day, except on the day I go to Kiwanis,” and even though the store is open on Sundays, he has his Sunday dinner at the Holiday Inn.

He says he hopes he doesn’t have to make sandwiches for customers, “but I have done just that, but not often.”

Ennis Haddock had worked for wholesale grocery prior to opening his own store, which originally was farther up Ninth Street.

The first day, he sold $20 worth of groceries — not bad for a day in the Depression. The Haddocks had seven children so everyone joined in the work. All the family was involved, and then in 1936, the family purchased a home across from Belmont School in 1936 to house a large family.

In 1940, the elder Haddock was battling health problems, and his son, Jimmy, left his job at Elk Brand Co. to operate the store.

In 1943, Jimmy went into the Army, and the store was sold to two men named Walker and Woodburn.

After the war, Jimmy and his brother Jack tried to buy the store back, but the new owners wouldn’t sell, so, on a location that included three lots the elder Haddock had purchased, the brothers joined in business and constructed the store that remains at the sale location today.

An interesting note was that Dr. Everett Wells, a long-time local veterinarian, set up his office and practice in the old grocery store location.

Jim says there’s an account of one day when Jimmy cut his hand, and he had Dr. Wells sew it up for him.

Jimmy was known as a fine butcher, and Jack worked the front end of the store.

But back to the “mongoose.” The story goes that the brothers had a two-section cage, and they’d ask customers if they wanted to see a mongoose. When they did, the brothers would tap on the cage, and when it opened, a long, wooly animal tail flew out in their face scaring the devil out of them.

In addition, customers wanting to use the restroom were startled when they opened the door and found a ground hog — dead and stuffed — sitting in there.

There were occasions when the horseplay even included a few cherry bombs being thrown around.

While working at the grocery, Jack also sold seed corn and 50-pound bags of popcorn from Princeton Farms in Princeton, Ind., leading Gardner to still sell the large bags of popcorn.

Former sheriff and county judge-executive Frank Gary used to work as a butcher and is still remembered for his expertise in cutting a great steak.

One of the great changes that has come with time resulted in the closing off all the local tobacco warehouses and sales.

During tobacco sales seasons, popular auctioneer Harry Crisp and many other buyers and people from the loose floors, including Planters, which was just behind Haddock’s, came for lunch and to visit.

“While we have lost that phase of business, we’ve gained through the heavy traffic on Ninth Street and the Pembroke Road with many people who work in the industries stopping to shop,” Jim said.

In 1971, Jack purchased Jimmy’s share of ownership and remained owner until 1973, when he was elected circuit court clerk. His son, Gary, was the next owner, and, from 1980 until 1987, Bill and Pat Kennedy owned the business. Gardner has been the owner for 27 years.

So, what is ahead for the future of this popular place?

“Well, food prices have greatly increased, but I think we’ve turned the corner,” Gardner said, indicating he has no plans but to keep the doors going, give the same good personal service and maintain the legacy of Haddock Brothers Grocery.

So proud of the accomplishments of our family!! Such a great article! [smile]