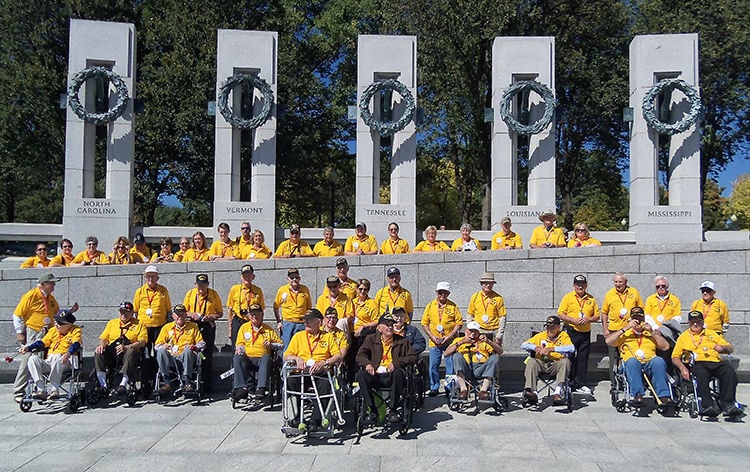 The Screaming Eagle Honor Flight of Clarksville took 30 area veterans, including three from the southern Pennyrile, to Washington, D.C., over the weekend to see the memorials that honor their service. 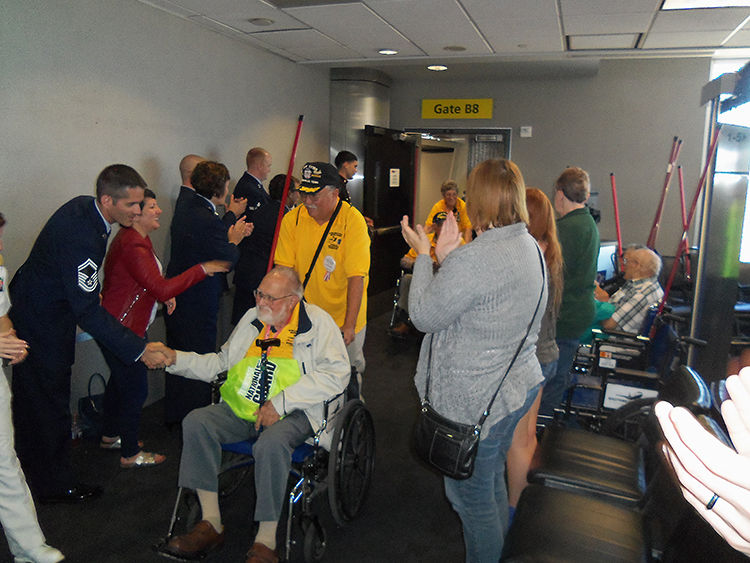 World War II and Korean War veterans on an all-expenses-paid trip to Washington, D.C., are applauded after landing at the airport.

The Screaming Eagle Honor Flight of Clarksville took 30 area veterans, including three from the southern Pennyrile, to Washington, D.C., over the weekend to see the memorials that honor their service.

World War II and Korean War veterans on an all-expenses-paid trip to Washington, D.C., are applauded after landing at the airport.

On Saturday, Screaming Eagle Honor Flight of Clarksville completed its inaugural mission to fly 30 area veterans, including three from the southern Pennyrile, to Washington, D.C., to see the memorials that honor their service.

Altogether, the all-expenses-paid trip included 25 veterans from World War II and five from the Korean War, according to trip organizers. The veterans all live in north-central Tennessee or south-central Kentucky, and the flight gave many the opportunity to visit memorials they otherwise would have never experienced.

The veterans were accompanied on the trip by volunteers who paid their own way to serve as escorts.

The group was greeted at the Nashville airport by Patriot Guard Riders motorcycle group. The 30 veterans were applauded, thanked and cheered. Arriving in Baltimore, they were greeted again, but this time by soldiers, sailors, marines and airmen.

After being loaded onto a bus bound for the Capitol, they went to the World War II memorial where several photographs were taken before they went on a tour.

After that, they were off to the Korean War memorial and then to the US Marine memorial, also known as the Iwo Jima Memorial, before going to Arlington National Cemetery to watch the changing of the guard at the Tomb of the Unknown Soldiers.

A major disappointment: U.S. added 266,000 jobs in April, well below the 1 million expected

From there, they drove around the Air force memorial and then back to the airport for the flight home.

Throughout the trip, the veterans were greeted by people who thanked them for their service.

In addition to the free fights and tours, the veterans also received cards from school students of all ages again thanking them for their service.

On their return, they were also greeted in person at the airport by some of those students’ teacher, a fifth-grade teacher, and her husband.

For more information and photos from the Screaming Eagle Honor Flight, go to www.screamingeaglehf.org.