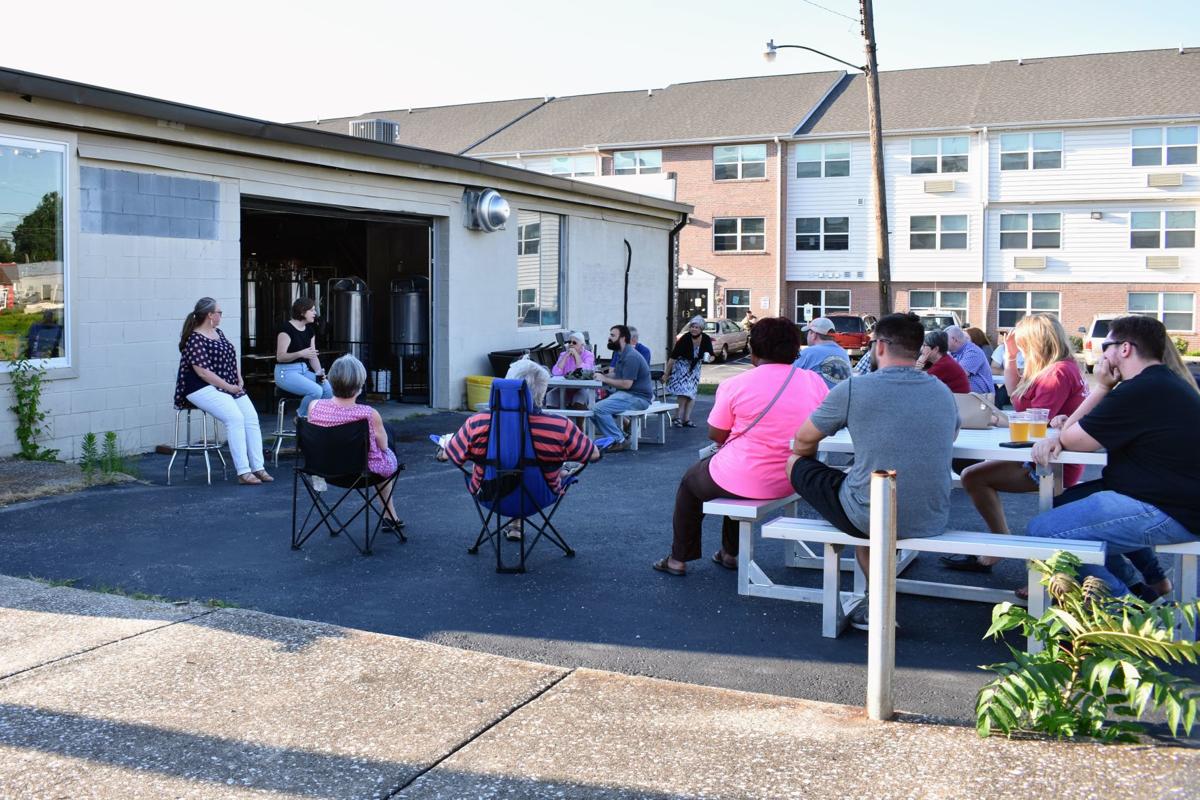 Families and friends sit on the outside patio of the Hopkinsville Brewing Co., keeping their distance from each other with tables 6 feet apart while listening to the museum’s History on Tap program Thursday. 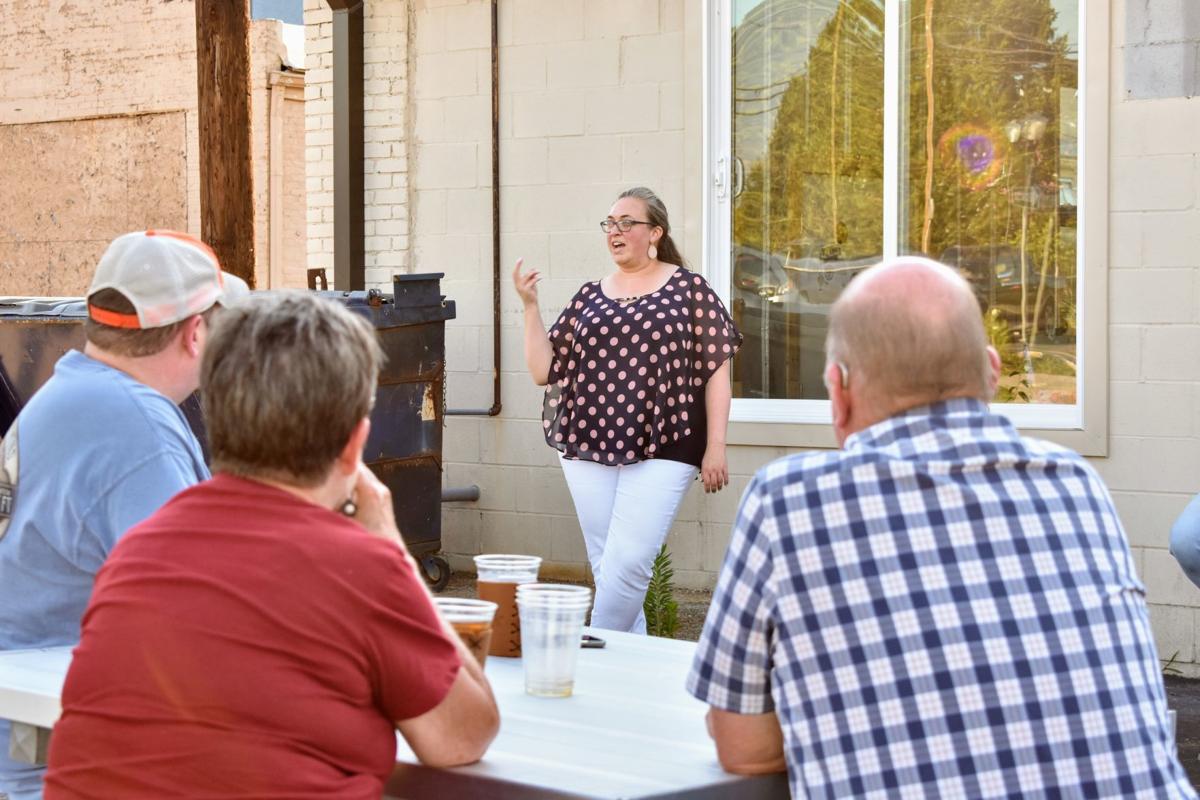 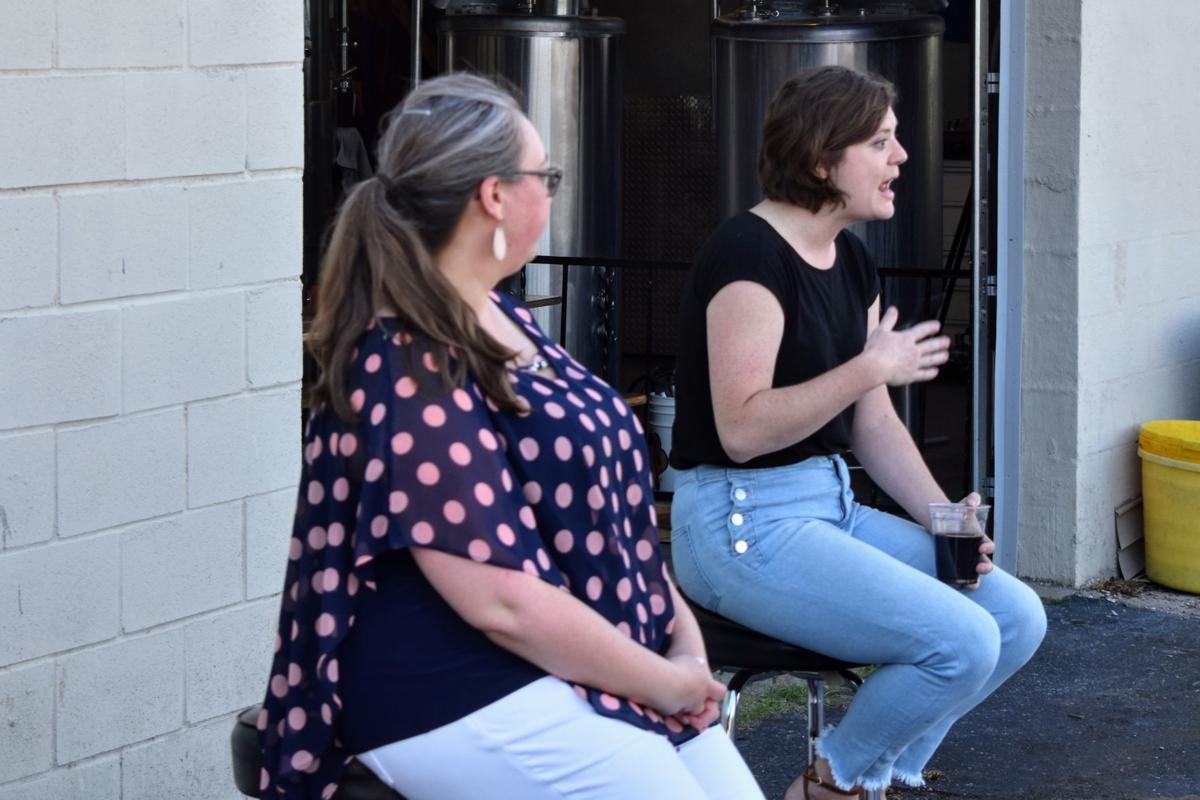 Grace Abernethy, one of Keller’s graduate school friends, helps tell the stories of local African Americans who served in the Union Army during the Civil War. The pair of them focused largely on those who were buried at the Vine Street Cemetery.

Families and friends sit on the outside patio of the Hopkinsville Brewing Co., keeping their distance from each other with tables 6 feet apart while listening to the museum’s History on Tap program Thursday.

Grace Abernethy, one of Keller’s graduate school friends, helps tell the stories of local African Americans who served in the Union Army during the Civil War. The pair of them focused largely on those who were buried at the Vine Street Cemetery.

The Museums of Historic Hopkinsville-Christian County hosted its first History on Tap at the Hopkinsville Brewing Co. since January, prior to the COVID-19 pandemic.

Families and friends crowded the outside patio of the brewery, keeping their distance from each other with tables 6 feet apart Thursday night.

Following recent news coverage of the Black Lives Matter movement and protests across the nation, the museum told the stories of Christian County during the Civil War with a large focus on the number of local African American troops who served for the Union Army.

“It totally encourages us to do this more,” Keller said in an interview with the New Era.

“While this was in the works prior, one of the things that we have done is at our most recent museums board meeting, we discussed what we could do, and one of the first things as a staff and board we wanted to do was to make sure that we were talking about things and that we were educated.

“So, we’re going to start an internal book study so that we can start reading and discussing things so we can do a better job of relating those things to the community,” she continued. “We also went back through our strategic plan to identify spots that we could focus specifically on black history, because that’s really our role, to tell the local stories.”

Keller continued to share that Christian County has a rich African American history and that the museum is dedicated to telling those stories.

Keller, with the help of her graduate school friend Grace Abernethy, the two of them explained that in 1863 U.S. Congress passed an act to allow African American men to serve in the Union Army.

“Some basics about how that worked, the 54 Massachussets is the regiment that everyone’s heard of because of the movie ‘Glory,’ but there were lots of them,” Keller said. “Almost 24,000 men from Kentucky served in the colored troops, which is the second most of any state.”

Keller continued to share that according to the Kentucky African American database, there were 500 black men in Christian County who said they had served in the Union Army.

Following Abernethy telling stories focused on what the black troops did in the Civil War, the pair turned their focus to telling the local stories of some of the men the museum has been researching who were buried at the Vine Street Cemetery.

“We’ve been trying to dig their stories out, but most, if not, all of them, would’ve been enslaved when the war started,” Keller said. “At least one was drafted into the Union Army, but most enlisted on their own.”

Keller and Abernethy continued to share stories of where the men were during the Civil War and then where they were after the war ended. The pair added that following the war most of the local African American troops were politically active.

One of the individuals was Peter Postell. Keller said Postell is a well-known name around Christian County and Hopkinsville. Keller said he built the building that once stood on the corner of Sixth and Virginia streets.

“We’re learning more and more about how prominent he really was and what he did for not just the African American community but for the community at large,” Keller said. “He was really, really powerful.”

Following the conclusion of History on Tap, Keller said it felt good to get back out in the public eye and share some local history.

After not being able to host many in-person events like History on Tap, since the coronavirus pandemic broke out, Keller said the turnout to the event Thursday was positive.

“I’m very pleased with the turnout,” Keller said. “I’m happy and it was a good number. It was comfortable and everybody that wanted to be here was here.”

The next History on Tap will be July 23.