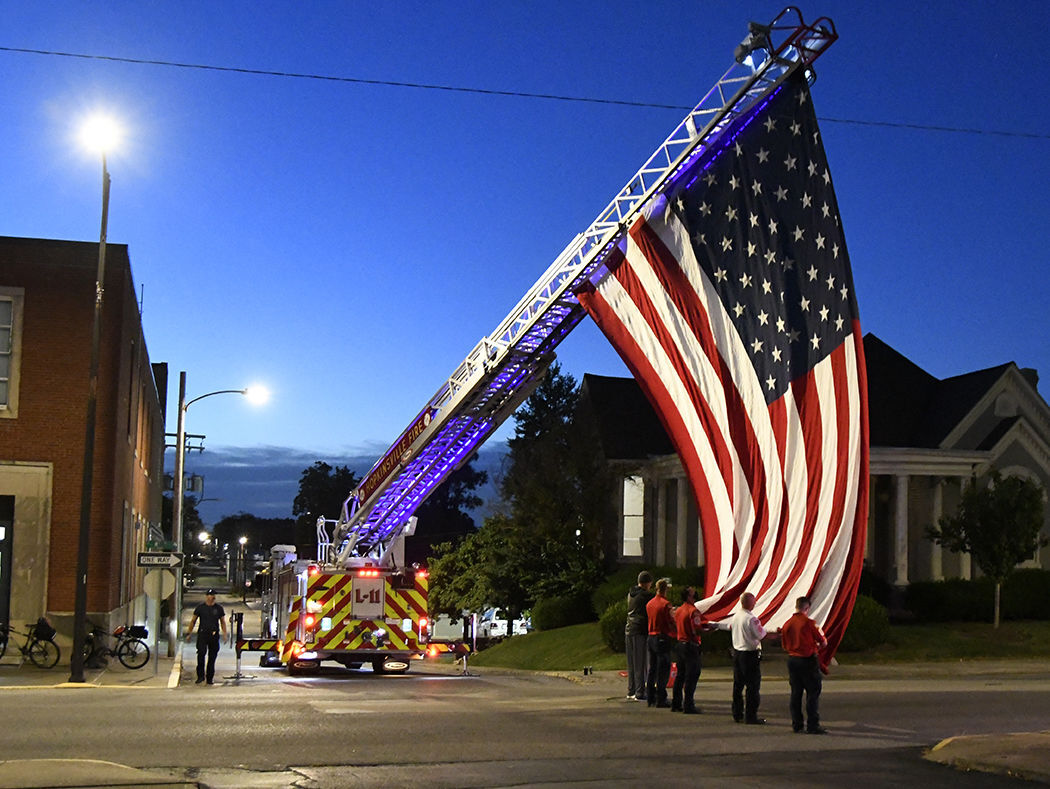 The Hopkinsville Fire Department hung the American flag across South Main Street before the start of last year’s Hoptown Half Marathon and 5K. Temperatures hovered in the high 40s. 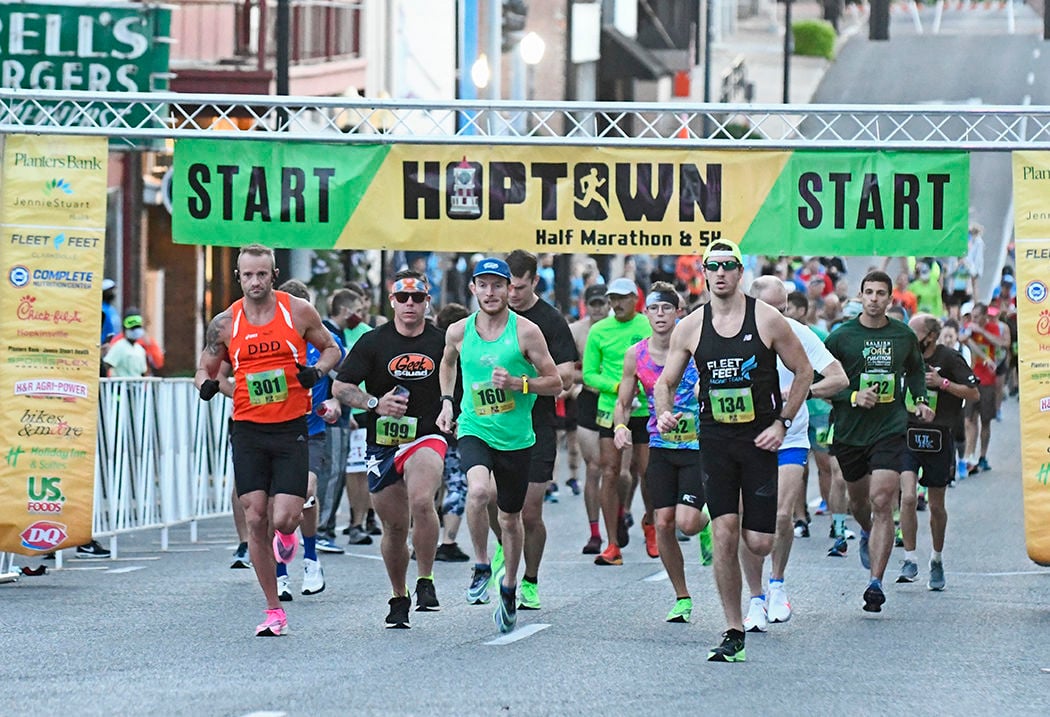 The third annual Hoptown Half Marathon & 5K, sponsored by Planters Bank and Jennie Stuart Health, will be held on Saturday, Sept. 18, this year and there is still time to get signed up. 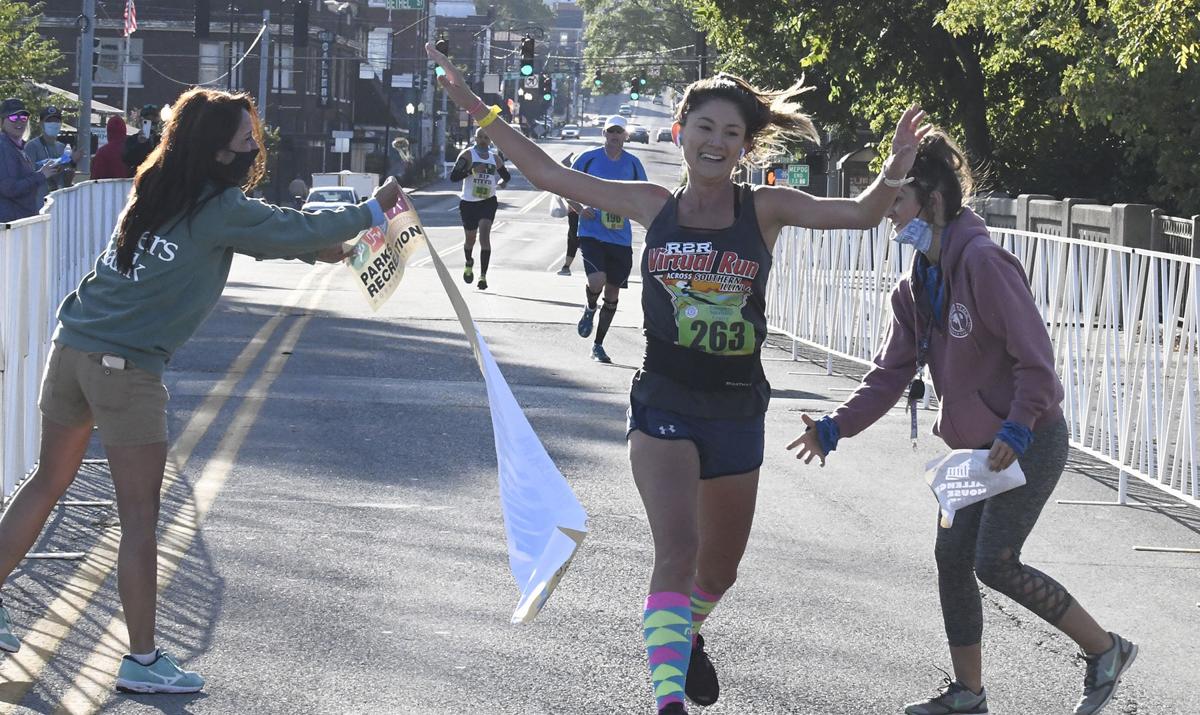 Hands raised in the air, Danielle Bradley of McLeansboro, Ill., breaks the tape as she crosses the finish line to win the second annual Hoptown Half Marathon women’s overall last year. This year’s race will be held on Saturday, Sept. 18.

The Hopkinsville Fire Department hung the American flag across South Main Street before the start of last year’s Hoptown Half Marathon and 5K. Temperatures hovered in the high 40s.

The third annual Hoptown Half Marathon & 5K, sponsored by Planters Bank and Jennie Stuart Health, will be held on Saturday, Sept. 18, this year and there is still time to get signed up.

Hands raised in the air, Danielle Bradley of McLeansboro, Ill., breaks the tape as she crosses the finish line to win the second annual Hoptown Half Marathon women’s overall last year. This year’s race will be held on Saturday, Sept. 18.

The third annual Hoptown Half Marathon & 5K, sponsored by Planters Bank and Jennie Stuart Health, is just around the corner and race organizers are expecting an even bigger crowd this year.

The race will be held on Saturday, Sept. 18, this year and there is still time to get signed up.

Race entry fees are currently $85 for the Planters Bank Half Marathon, $55 for the Jennie Stuart Health 5K, and $25 dollars for the Wally’s Walkers 1-Mile walk/run.

The race drew nearly 600 runners last year as organizers forged on as the only road race in the region during the COVID period. An extraordinary number of safety guidelines were implemented last fall that eased the minds of runners and satisfied local health department guidelines. The 2021 edition will be back to business as usual with a larger turnout in year three, according to officials.

“With two years of very successful races under our belt we expect an increased field for this year’s Planters Bank-Jennie Stuart Health Hoptown Half Marathon & 5K,” said Tab Brockman, Hopkinsville Parks and Recreation Superintendent, in a press release. “We continue to gather input from runners, volunteers, sponsors and emergency personnel to make improvements to produce an excellent event for our local runners and hundreds of out-of-town guests.”

This year the race has a new logo, which still prominently features the Hoptown nickname in a contemporary font. The updated mark has added a stylized version of the quarter-mile bridge that is the focal point of the community’s Greenway Rail Trail Phase 2 addition. Runners in the Half Marathon will cover the entire new Rail Trail section, including the spectacular new bridge. Utilizing the quarter-mile bridge will also help ease traffic congestion on race morning by taking runners off Lafayette Road and Country Club Lane on the return portion of the course.

“We’re absolutely thrilled to once again host runners from near and far for our third year in a row for the Hoptown Half and 5K! So far, we have runners signed up from 12 states. We feel confident that they’ll love this year’s updated route, which includes running across the 1,400-foot-long Hopkinsville Greenway pedestrian bridge,” said Korey Raymond, HH5 Race Director and veteran runner.

Toby Hudson, Parks and Recreation Programs Coordinator, coordinates the logistics for the park division’s events, including the HH5.

'The Voice' debuts Ariana Grande as a new judge

“The Half Marathon route change for 2021 will not only create exposure to Phase 2 of Hopkinsville Greenway, but also creates less traffic disturbance along the inward half of the marathon route,” Hudson said. “We have worked diligently with our Public Works Department, Police Department, Fire Department, Christian County Sheriff’s Office and Christian County Emergency Team to create a route that is safe and efficient for the participants and still showcases the positive efforts the City of Hopkinsville has made toward the health and wellness for its citizens. The HH5 is another collaborative effort from many departments within our city and county to make a first-class event.”

The new souvenir participant shirts for this year for both races will also feature the pedestrian bridge icon in a subliminal background print on the red (Half Marathon) and gray (5K) long-sleeve wearables.

The United Way of the Pennyrile will be the race benefactor for this year. United Way was the charity for the inaugural 2019 event and received over $13,000 in race proceeds to help underwrite the 20 agencies United Way serves in the four-county region (Christian, Trigg, Caldwell, Todd). United Way donations were down nearly $100,000 in 2020 due to the pandemic impact that prevented in-person meetings with local employers and donors. United Way directly impacts 75,000 people throughout the region. HH5 proceeds will help United Way reach the local goal of $750,000 in the 2021 “Baking A Difference.”

“We are extremely grateful to be the beneficiary of this year’s Hoptown Half Marathon and 5K. This funding will go a long way to support the programs offered by our partner agencies. We thank the race committee for thinking of us and thank all who will be running in the event. Our United Way team is also excited to help with volunteering at the race and pre-race events,” said Betsy Bond, Executive Director of the United Way of the Pennyrile.

Last year the race added a one-mile walk/run to show community appreciation for the late Wally Bryan, former Hopkinsville Mayor and founder of Challenge House, Inc. The one-mile portion of the event is on again for this year, with a current $25 entry fee. The proceeds from the Wally’s Walkers Mile Walk will benefit Challenge House, Inc. again, this year as they continue raising funds to start Challenge House #6 to serve Hopkinsville’s East Side as a neighborhood safe place and sanctuary for kids and families.

“Challenge House is extremely excited and very appreciative that the Hoptown Half Marathon & 5K will once again include the Wally’s Walkers 1-mile event. We are very grateful for the continued support of the Recreation Department of our ministry,” said Michelle Wilson, Challenge House Executive Director.

The HH5 relies on a broad range of volunteers to make the race happen. Civic groups and companies are encouraged to put a team together to man one of the 13 water stations along the route, where volunteers are also judged by runners for cash spirit prizes. Additionally, help is needed at start/finish lines and for race sign-in at the Expo on Friday, September 17. For more volunteer info contact Korey Raymond at koreyraymond83@gmail.com. Or call Hopkinsville Parks and Recreation at 270-887-4290.