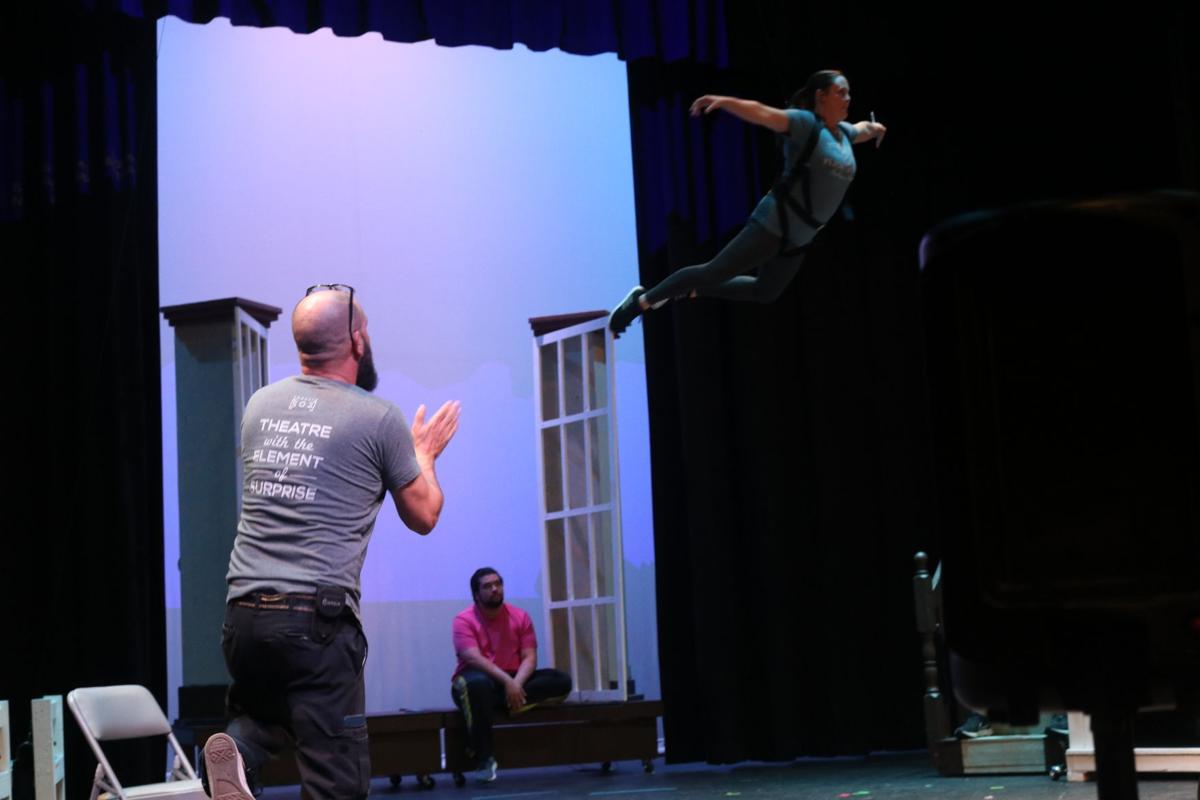 The production company ZFX hosts flight school in for Campanile Productions with their upcoming debut of “Peter Pan” at the Alhambra Theatre. 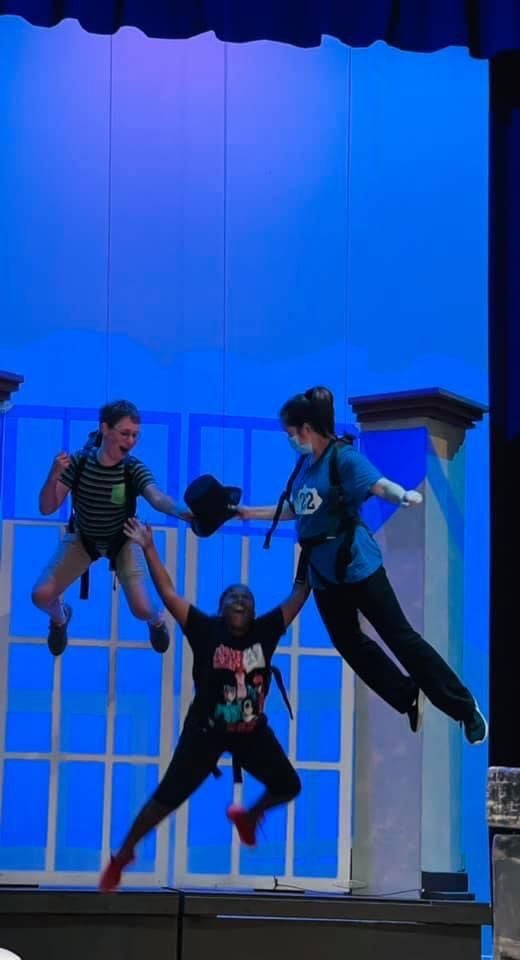 Four actors will be flying for the first time ever in the theatre. 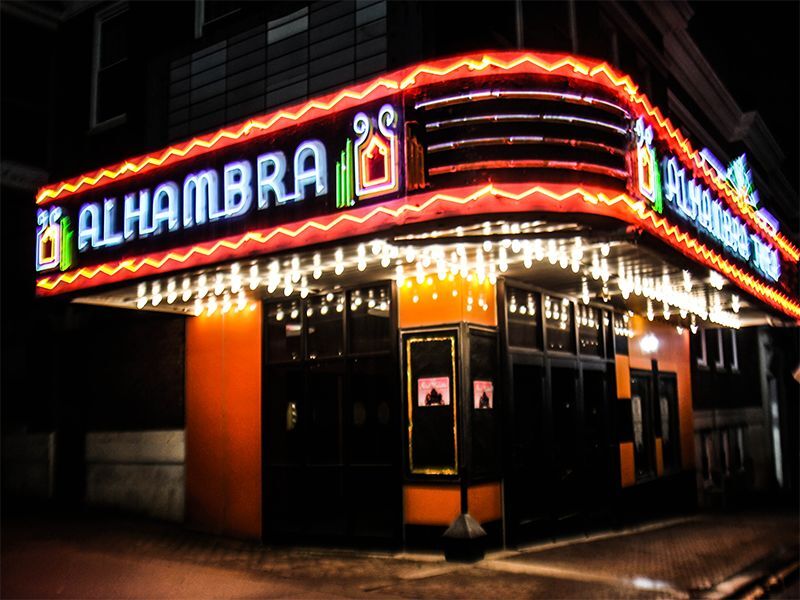 The Alhambra Theatre will be hosting “Peter Pan the Musical” on Octr 21-24 by Campanile Productions.

The production company ZFX hosts flight school in for Campanile Productions with their upcoming debut of “Peter Pan” at the Alhambra Theatre.

Four actors will be flying for the first time ever in the theatre.

The Alhambra Theatre will be hosting “Peter Pan the Musical” on Octr 21-24 by Campanile Productions.

Campanile Productions is back in the session working on the debut of “Peter Pan the Musical” at the Alhambra Theater.

Campanile was started by a group of theatre lovers who longed for their city to know the joy of the stage. They have been running productions for over a decade, and are proud being a non-profit community theatre organization. The entire cast is excited to return to stage for the first time since the beginning of the pandemic with the presentation of Peter Pan.

The play will run Oct. 21-24. Ticket prices for standard shows range from $10 to $25. Evening performances are set for 7 p.m., both Thursday and Friday. Saturday there will be a 2:30 p.m. matinee performance as well as a 7 p.m. viewing. Peter Pan the Musical, will end on Sunday with a matinee showing at 2:30 p.m. Early shows will have discounted ticket pricing.

Peter Pan who is a free-spirited and mischievous young boy who never wants to grow up, who can also fly. Peter Pan spends his never-ending childhood having adventures on the mythical island of Neverland as the leader of the Lost Boys. All the while being accompanied by other mythical beings.

Production company, ZFX, out of Louisville, has been conducting flight school inside the Alhambra Theater for a short period before the musical hits the stage. During the show, four actors will be flying. This will be the first time ever in the Alhambra such stunts have been performed. A show of this magnitude takes hundreds of volunteer hours and a budget of $35,000.

Erin Namie, who is playing the lead role as Peter Pan, said there is a lot of anticipation to be back on stage.

“I have this weird sense of excitement and relief. Since the pandemic, it’s been so tense,” she said. “I’ve been involved in theater for as long as I can remember, I didn’t realize how much it meant to me until it wasn’t there. I feel strongly that the arts are important. All of my children, all four of them including my husband are involved. It’s been so fun to have them all here. This is the first time all of my children have been old enough to enjoy what I truly love.”

Jon Stewart: 'We still have time' to save US democracy

Jackson Wells, who will be playing Captain Hook is also looking forward to being in front of a crowd.

“I’m hoping a bunch of people are excited. It’s been so long,” he said. “I’m a little nervous, being that this is only my second show ever. I look forward to spending time with everybody. We are like a family, we get to know each other. I’m not a flyer so I do a lot of sitting and watching”, he said. “Since being here though, as a fun fact I am a youth minister. And my degree is middle school math education so I’m able to hang around and help kids with their homework.”

The behind of the scenes of Peter Pan have been more strenuous than they appear. Auditions were held back in August for the roles in the play. Once all actors were named, they went through a challenging choreography boot camp. The actors now are back in the Alhambra practicing every day from 5:30-10 p.m.

“Flight choreography consumes a lot of time,” Namie said. “We are shown everything in a span of four days. Just thinking about the first night when the audience is back, makes me emotional. I am so excited for the community to get back into the Arts. I know Ms. Margaret, who runs the Alhambra feels the same way. She’s very passionate about the Arts. We all get along, we are a tight knit. I get sad thinking about when it’s over. It goes by so quickly.”

Just the day before the show debuts on Wednesday, Oct. 20, there will be a “Pay What You Can” night. The cast will be dressed as they practice their final rehearsal. The event is free to attend, donations will be gladly accepted.

Campanile Productions welcomes the community out and see the one of a kind musical. Peter Pan the musical will be adult and kid friendly. A lot of emotions will be felt, the Alhambra will return having been quiet for more than a year and a half since the last show Mamma Mia.