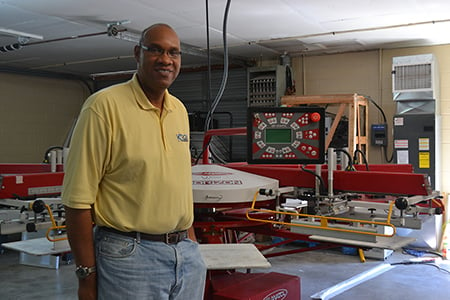 Fred Cowan, who played basketball at the University of Kentucky, stands in front of an automatic T-shirt press. He bragged that the machine can make 900 shirts per hour. 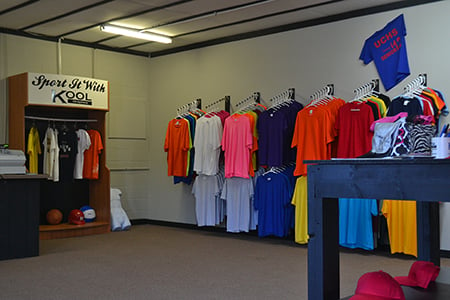 Customers can choose from a variety of apparel in a lot of colors. The store is at 408 N. Main St.

Fred Cowan, who played basketball at the University of Kentucky, stands in front of an automatic T-shirt press. He bragged that the machine can make 900 shirts per hour.

Customers can choose from a variety of apparel in a lot of colors. The store is at 408 N. Main St.

Traveling isn’t something that Fred Cowan, 55, wanted to do on the basketball court back in the ’70s. But in life, it led him as far as Japan, Paris, Switzerland, Amsterdam, Nairobi and most recently, Hopkinsville.

Kool Graphics can also design team uniforms, which the owner spent plenty of time wearing in his younger days.

Standing at 6 feet, 8 inches, Cowan played forward for the University of Kentucky men’s basketball team from 1978-1981. The team won the 1978 NCAA Championship during Cowan’s freshman year.

That same year, he took his first trip overseas to play basketball in Japan for two weeks.

Cowan was drafted by the Houston Rockets his senior year; however, he took up another offer to go back to Japan and play for the Toshiba Corporation.

With a business degree in hand, Cowan saw his opportunity to play basketball and learn more about the corporation.

“Not only could I play, but I had a job opportunity with the company,” he said.

Contrast Biden and Trump on climate policy in 90 secs

Throughout the course of his career, Cowan has juggled his passion for sports and business.

He managed a sporting goods store for 12 years, worked in the mortgage financing and refinancing business for five years, spent a year and a half in Paris and coached basketball in Switzerland.

So, why did he decide to open a screen printing business in Hopkinsville?

Cowan said it just made sense.

“I did research and saw that this was the best place for it,” he said. “It’s something I know how to do and I enjoy doing it.”

As far as being in a new town, Cowan said “it’s no big deal” because he loves to travel. He plans for his next voyage to be to South Africa.

“Since I’ve lived in a few different countries, I can call any place (in the U.S.) my home,” he said.

For more information on Kool Graphics, call 270-881-6727 or visit www.koolgraphicscompany.com.

REACH ZIRCONIA ALLEYNE at 270-887-3243 or zalleyne@kentuckynewera.com.