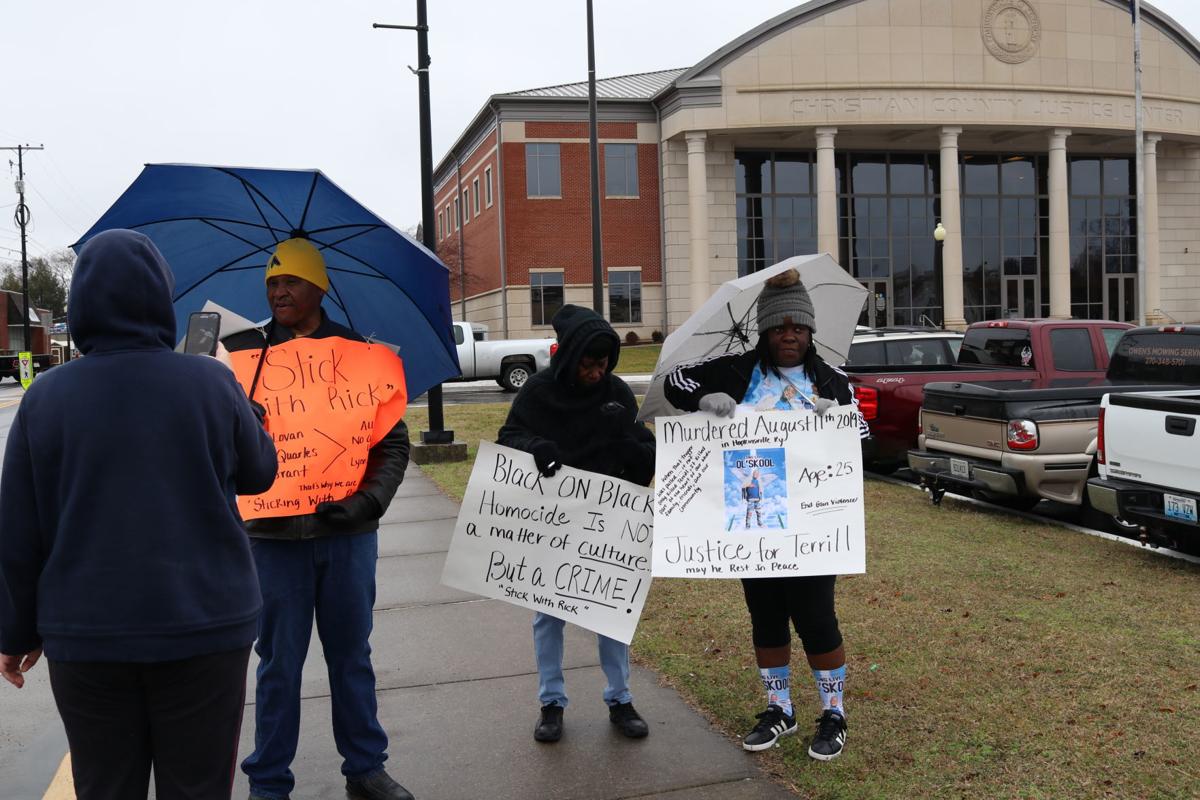 Demonstrators hold up signs about why they want Commonwealth’s Attorney Rick Boling to remain in the position. Angelique Victor (right) said she wants swift justice for her son Terrill Moore, who was murdered last August, and Boling promised to prosecute her son’s alleged murderer Robert Torian III. 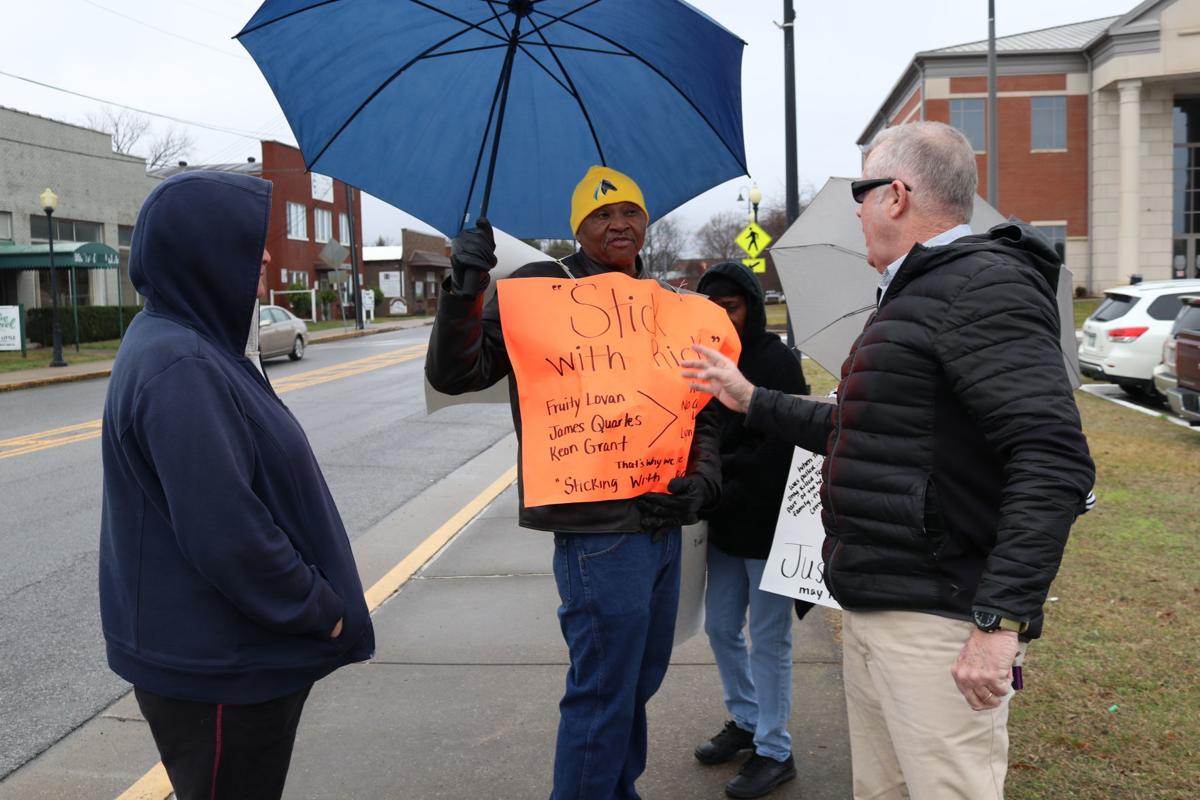 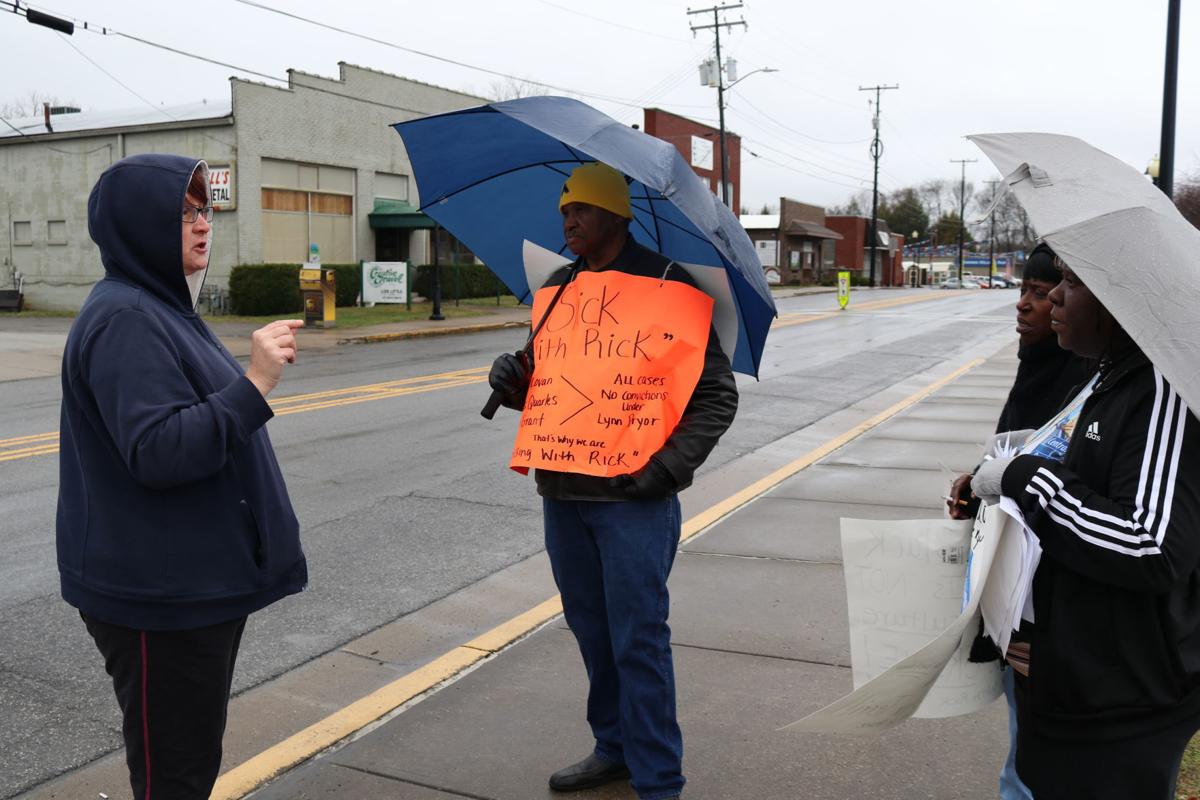 Amy Colon (left) talks with demonstrators about why she thinks Boling should resign. Colon said, "This is not political. This is right and wrong. He made a choice that messed up our entire judicial system."

Demonstrators hold up signs about why they want Commonwealth’s Attorney Rick Boling to remain in the position. Angelique Victor (right) said she wants swift justice for her son Terrill Moore, who was murdered last August, and Boling promised to prosecute her son’s alleged murderer Robert Torian III.

Amy Colon (left) talks with demonstrators about why she thinks Boling should resign. Colon said, "This is not political. This is right and wrong. He made a choice that messed up our entire judicial system."

About 15 horns honked and several drivers yelled out of their windows Wednesday in support of the orange sign Walter Shamble wore that read “Stick With Rick,” but only a handful of people braved the frigid weather and light rain to have dialogue about why they think the Christian County commonwealth’s attorney should or shouldn’t stay.

Shamble organized the counter demonstration in response to several protests over the past few weeks calling for Rick Boling to resign as commonwealth’s attorney.

Shamble said Boling should remain in the position to do the job he was elected for, despite the letter Boling wrote asking former Gov. Matt Bevin to pardon Dayton Jones of his 15-year sentence for first-degree sodomy, first-degree wanton endangerment and first-degree distribution of matter portraying a sexual performance by a minor.

“Some of what he did was inappropriate,” Shamble said of Boling’s letter, “but, the compelling issue is these homicides. I think that’s why the public hired him to do that job, and I think if we put someone in the office that has not won an election, I think we’re doing the whole community an injustice.”

Shamble’s sign included the names of three black men who were shot and killed in recent years but didn’t get justice, he said, through the conviction of their killer.

“All cases, no convictions under Lynn Pryor,” the sign stated, naming the former commonwealth’s attorney. “That’s why we are sticking with Rick.”

Along with Shamble, two women made signs sharing why they want Boling to stay.

One woman — who asked not to be named — held a sign that said “Black on black homicide is not a matter of culture ... but a crime. Stick With Rick!”

Angelique Victor — who wants Boling to prosecute the man who allegedly shot and killed her son, Terrill Moore, on Aug. 11 — held a sign that read, “Justice for Terrill. May he rest in peace. End gun violence.”

“For me personally, (Boling is) already over my son’s murder case and to change right in the middle, to prolong it, this is hard for me,” Victor said. “I trust Rick, and I’m just sticking with him.”

Torian was scheduled to appear in court Wednesday at the same time as the demonstration; however, his pretrial hearing was postponed to March.

Boling has been absent from court since the letter was made public. He and the circuit court judges have a “mutual agreement” for him to stay out of court for the “foreseeable future,” according to New Era archives.

“His behavior has affected your personal healing and closure,” Colon said to Victor. “He made a choice that messed up our entire judicial system for awhile.

Colon said the letter Boling penned on behalf of Jones was an example of privilege.

“In his letter, he uses ‘prominent family,’ and in Hopkinsville-Christian County, we all know that means white and wealthy,” said Colon, who is also white. “What I gather from it is ‘You know, one of ours made a mistake and you know, we don’t punish our own.’ That was my interpretation of that letter.”

“To me, that is classist and racist,” Colon said as she continued talking to the demonstrators who were black, “and that is not OK with me. That affects the justice that you get and you get, and it’s not OK.”

One man, who didn’t give his name, stopped briefly to thank Shamble for hosting the counter demonstration.

“I appreciate y’all standing up for Rick,” the man said. “It was nothing but stupid, teenage kids at a party. It was wrong, and they deserved time, but 15 to 20 years for teenage kids?”

According to New Era archives, Jones and three other boys pleaded guilty to the Oct. 12, 2014, sexual assault of a 15-year-old who was sodomized with a sex toy during a party. The boy suffered severe internal injuries as a result of the attack. It was also captured on video and shared on social media.

Colon shook hands with the man but said she didn’t agree with him that Boling should stay.

“We deserve better as a community,” she said. “We deserve an effective, unbiased prosecutor, and we need to get rid of him and set a precedent that future prosecutors know that we’re going to hold them accountable.”

By the end of the dialogue, Victor said if a special prosecutor is brought in for her son’s case, she wants be involved in the process.

“They just appoint people, but I need to know who and how they’re choosing them,” Victor said. “Who are they choosing and how do they pick them? My son is not going to be just another black child murdered. That’s why we came out here today.”

As more rain began to pour, Shamble decided to wrap up the demonstration shortly after 2 p.m. He and Colon exchanged information to continue having a discussion about the issue.

“We didn’t have a lot of people because of the weather,” Shamble said, “but I just enjoyed the opportunity to sit and talk with people who have a different opinion in mind about what’s going on in this community. I think we do need to sponsor some type of public forum to discuss this issue further.”

Boling: 'I am not resigning'

Despite calls from at least one current and one former commonwealth’s attorneys and public outcry, Christian County Commonwealth’s Attorney Ri…