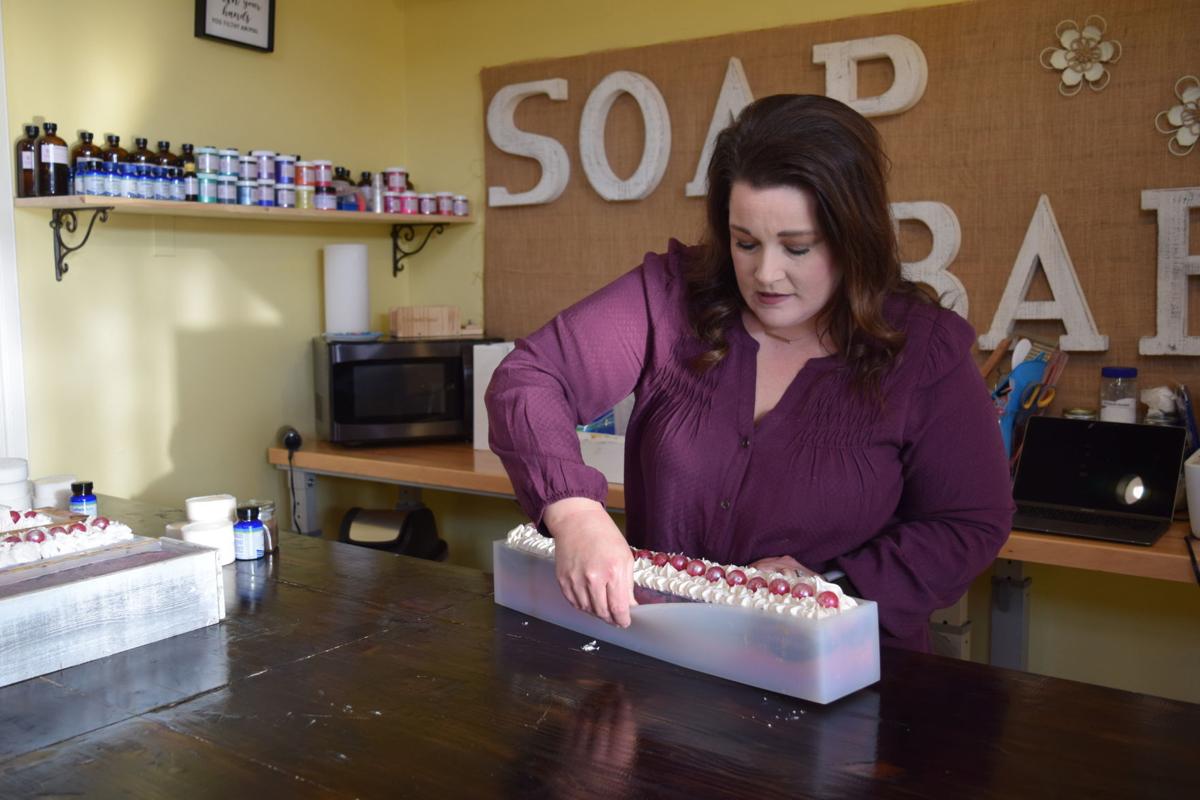 Kristina Dunaway removes a large uncut soap bar from a silicone mold as she prepares to cut the large mass of soap into individual bars. Following the whole bar being divided individually, Dunaway will have to let the bars cure or dry for roughly four to six weeks. 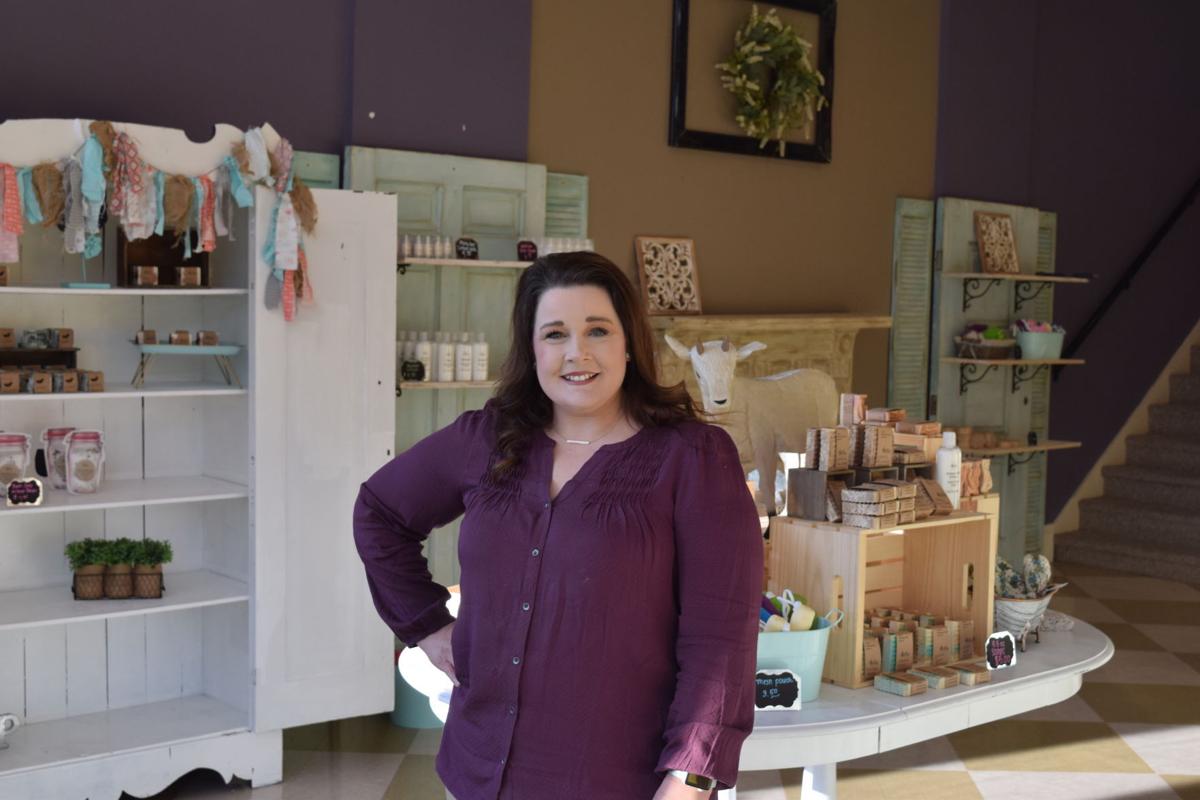 Kristina Dunaway removes a large uncut soap bar from a silicone mold as she prepares to cut the large mass of soap into individual bars. Following the whole bar being divided individually, Dunaway will have to let the bars cure or dry for roughly four to six weeks.

Hopkinsville native, Kristina Dunaway opened up her first brick-and-mortar store for Stella’s Soap Company in mid-December amid the pandemic.

While also working as the Director of Resident Services at Morningside Assisted Living, she opened her shop located at 200 E. 9th St., in the building previously rented by Books on Main.

Dunway explained that opening up in the middle of a pandemic was daunting. Despite that, Stella’s first month in the building proved to be a good one.

“December was a great month for us (because of) Christmas,” said Dunaway.

Stella’s Soap Company started off as a booth at local festivals, detailed Dunaway.

Before her first festival in Elkton three years ago, Dunaway’s husband questioned if the market for handmade soaps was viable. At that event, Dunaway nearly sold out her inventory. She credits that event for being the turning point in support for Stella’s.

Dunaway also credits the support of her returning customers for Stella’s move into a physical storefront.

The transition from pop-up shops to an in person store took roughly a year, explained Dunaway.

“Unfortunately, Books on Main did go out of business, but it was the right time for us and we stepped right in,” said Dunaway.

Dunaway’s initial interest in soapmaking came through her search for a dry-skin saver.

“I started using goat milk soap through another vendor here and I fell in love with the way it made my skin feel,” said Dunaway.

After Dunaway’s discovery of goat’s milk soap, she researched and found ingredients that worked better for her and her family’s skin needs.

She uses lard, coconut and olive oil, goat milk and lye as the base of her soaps. For the different fragrances, she uses fragrance oils, some of which she buys from her store neighbor at Milkweed Health and Harmony Emporium. Dunaway uses a cold process to make her soaps. This process requires four to six weeks to cure the soap.

She said that many new customers question the use of lard in her soaps. Dunaway says that the fats in lard are a great moisturizer. Dunaway learned about the benefits of this ingredient from one of her patients early on in her nursing career.

When opening the storefront, Dunway started out with just the stock she had at home. She plans to continue producing soaps, lotions, bath bombs and other body products to fill the store.

In the future, Dunaway plans to use the building’s loft as a classroom space for community members to create their own body products.

Dunaway noted that these classes will be available for birthdays, bachelorette parties and other social gatherings.

She also plans on releasing seasonal scents that will correspond with major holidays. She is currently working on her Valentine’s Day scents.

The Oatmeal, Milk and Honey Soap has been the best seller for Stella’s according to Dunaway.

This soap has ground up colloidal oatmeal within the bar which Dunaway says helps to soothe the skin. She said that this bar of soap is good for those with sensitive skin and new to using Stella’s Soaps.

This is how Biden says he'd fix the health care system

Stella’s soap bars are packaged minimally on purpose, Dunaway explained. She also plans to implement a recycling program once more of her body products like sugar scrubs and body butters are stocked.

She continued to explain that sourcing her ingredients locally will help to boost the economy, help draw business to downtown Hopkinsville and keep her price points low.

Beyond the floral and fruity bars Dunaway offers, she currently carries a bar called Monkey Farts and one called Dirt.

After naming the fragrance Monkey Farts, Dunaway had trepidation about how her customers would react to the name. Luckily for Dunaway, the name didn’t turn customers away as she now plans to make the scent into bath bombs and lotions to finish off the line.

The idea of having a dirt scented soap came from a hunter who stopped by at one of her festival booths.

“Hunters will use dirt soap to mask their fragrance so when they go hunting, deer won’t catch the hunter’s scent,” said Dunaway.

On top of it’s practical use, Dunaway said that the dirt soap is also a wonderful gag gift.

Dunaway has been most proud of her success when many thought her soap company wouldn’t succeed.

Now, Dunaway plans to step down from her current position at Morningside Assisted Living to focus full-time on Stella’s.

She explained that one of the aspects of her job as a nurse for Morningside was teaching which she now plans on doing through Stella’s.

“(Now)I’m trying to educate people on the chemicals that are in soap,” said Dunaway.

“I turned over my bottle of Dove body wash and then I looked at my soap which only had five ingredients.”

Stella’s has been up-and-running for three years, 2021 marking its fourth year.

“The American dream is to open your own business. With me being a nurse, I never thought that I would ever not be a nurse… But this is where I am led to,” said Dunaway.

“When I think about things that are comforting and good for you, I think of my grandmother,” said Dunaway.

Dunaway keeps a photo of Adams on display behind the register.

Now, Dunaway hopes to continue the success of Stella’s moving forward even while still in the thick of the COVID-19 pandemic.