You are the owner of this article.
Edit Article Add New Article
You have permission to edit this article.
Edit
Home
News
Coronavirus
Sports
Opinion
Living
Obituaries
Classifieds
e-Edition
Subscribe/Renew
1 of 5 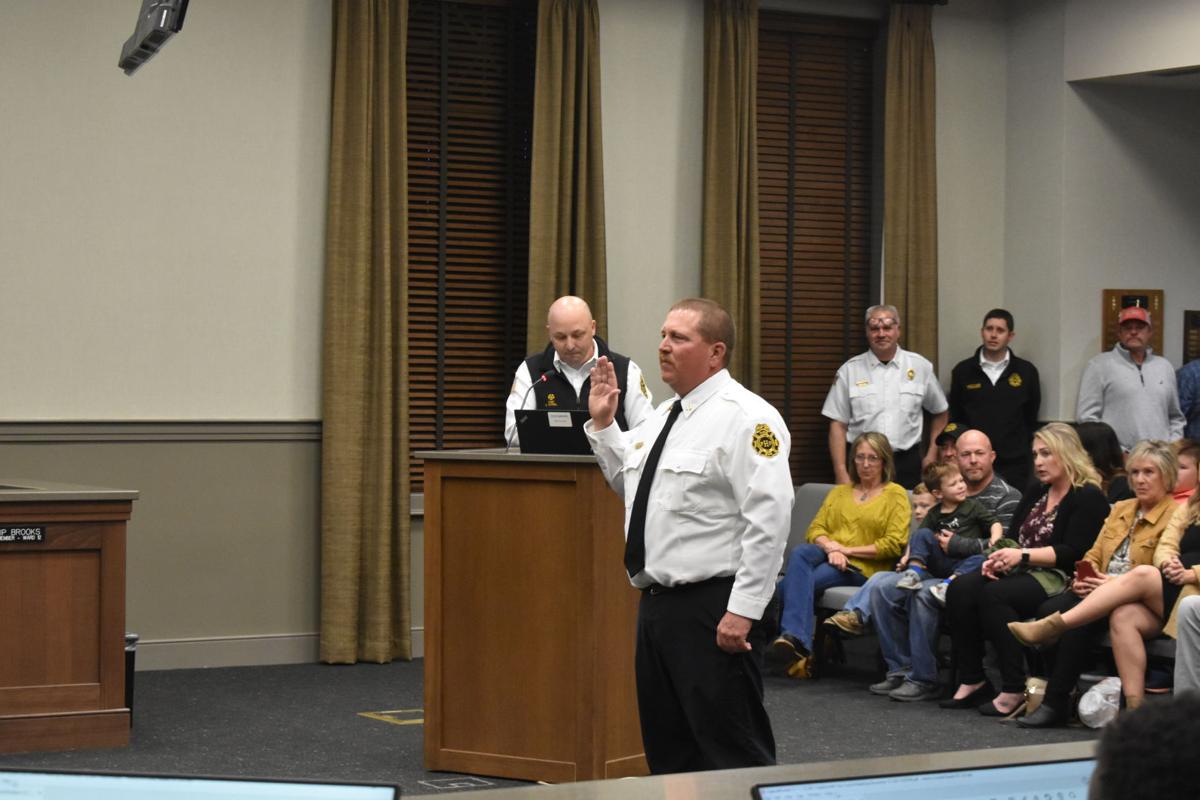 Hopkinsville Fire Captain Andrew Watts takes his oath after being promoted to the rank of Captain. 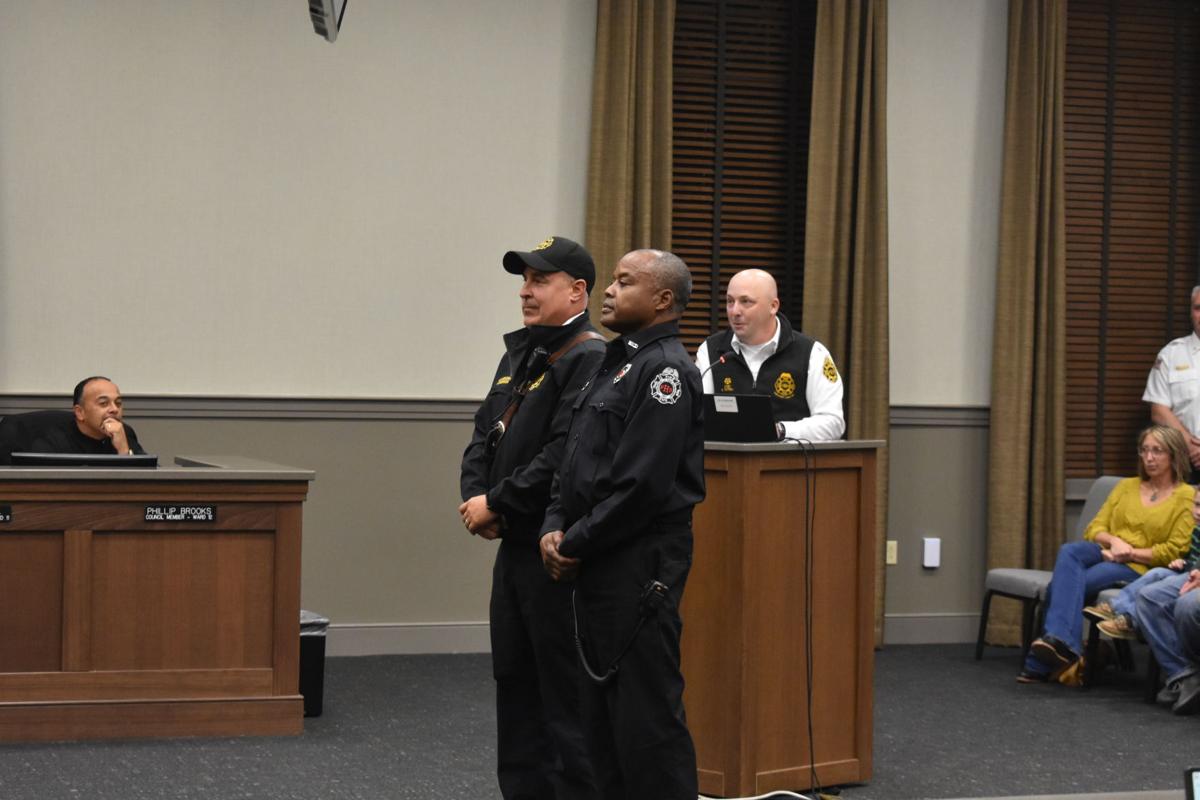 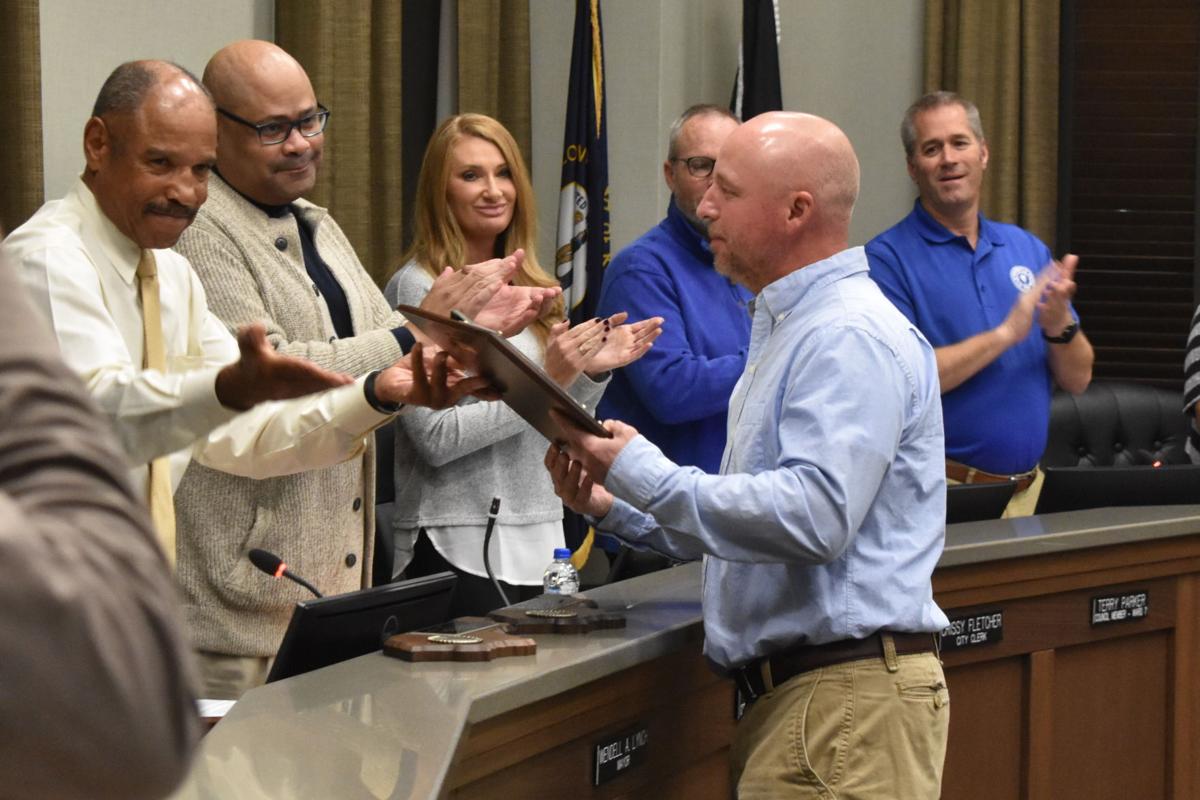 Recently retired Hopkinsville Fire Captain Bill Nightingale (right) receives an award from Hopkinsville Mayor Wendell Lynch (left) as he was congratulated and thanked for his service to the department. 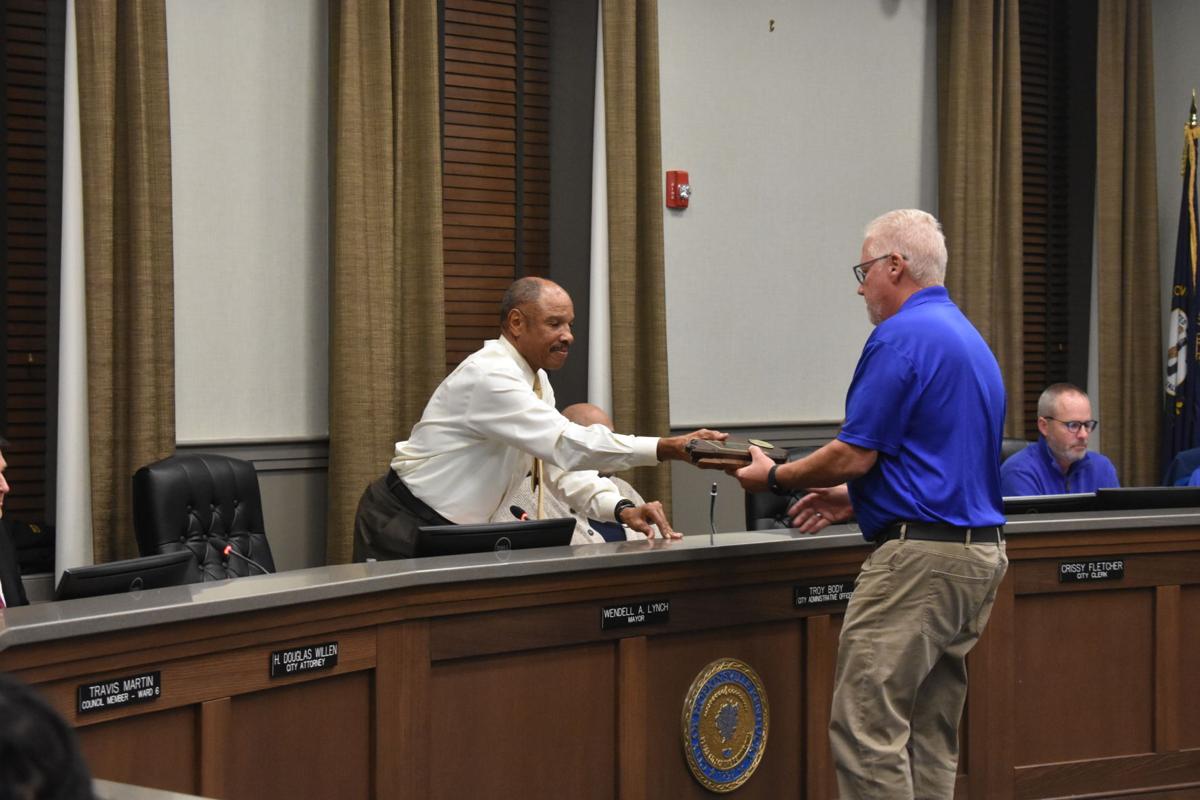 Hopkinsville’s Department of Parks and Recreation Superintended Tab Brockman (right) accepts the Department of the Year award and the Outstand Facility award, both awarded by the Kentucky Recreation and Parks Society, from Mayor Wendell Lynch. 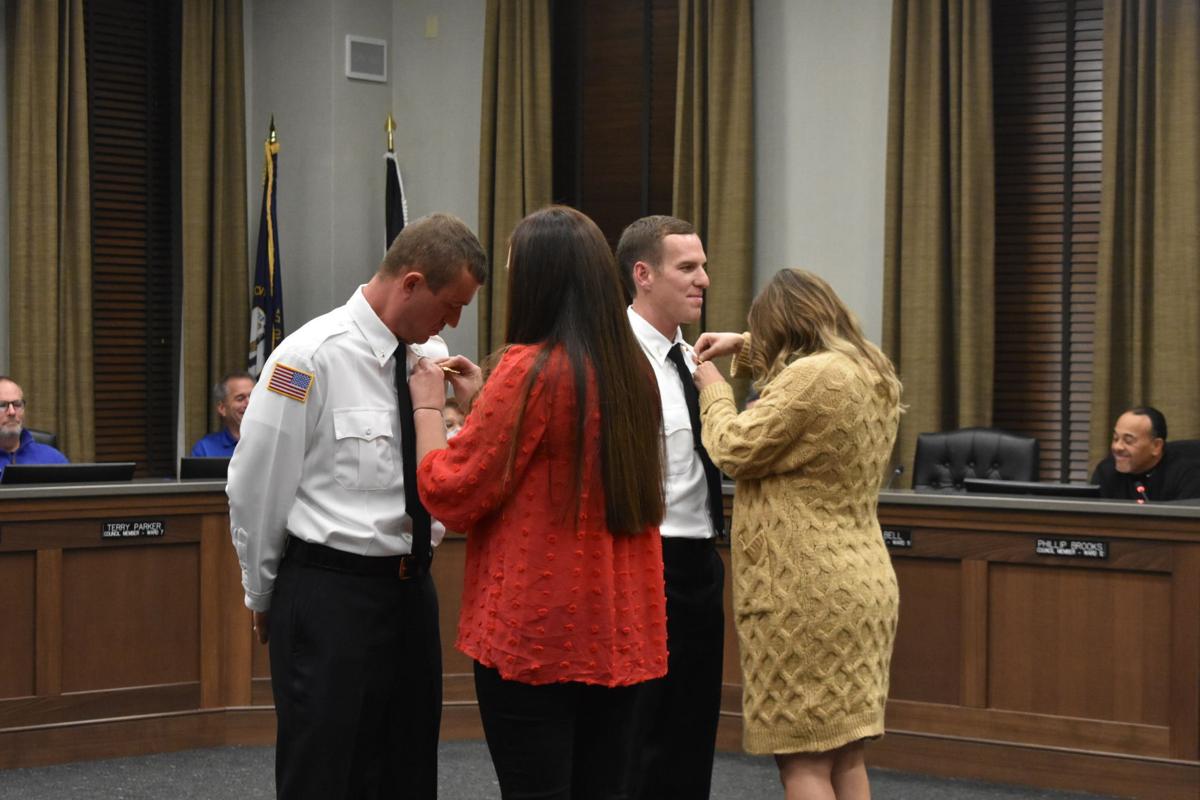 Hopkinsville fireman Kyle Graves (left) is pinned by his girlfriend Kimberly Hyde and fireman Payton Rogers (right) is pinned by his wife Hannah Rogers during Tuesday night’s City Council meeting after their recent promitions to the rank of Lieutenant.

Hopkinsville Fire Captain Andrew Watts takes his oath after being promoted to the rank of Captain.

Recently retired Hopkinsville Fire Captain Bill Nightingale (right) receives an award from Hopkinsville Mayor Wendell Lynch (left) as he was congratulated and thanked for his service to the department.

Hopkinsville’s Department of Parks and Recreation Superintended Tab Brockman (right) accepts the Department of the Year award and the Outstand Facility award, both awarded by the Kentucky Recreation and Parks Society, from Mayor Wendell Lynch.

Hopkinsville fireman Kyle Graves (left) is pinned by his girlfriend Kimberly Hyde and fireman Payton Rogers (right) is pinned by his wife Hannah Rogers during Tuesday night’s City Council meeting after their recent promitions to the rank of Lieutenant.

The Hopkinsville City Council met Tuesday night for a regular meeting in which the council presented several awards and recognitions to Hopkinsville Firefighters and Hopkinsville Department of Parks and Recreation staff before entering into official council business.

The Hopkinsville Fire Department was the first to be recognized Tuesday night as three of its employees were recently promoted and one of the department’s captains recently retired.

Hopkinsville Fire Chief Steve Futrell took the podium to share with the council and the public that two firefighters, Kyle Graves and Payton Rogers, had been promoted to the rank of Lieutenant.

Futrell continued to share that Graves was hired on in 2014 and is currently an instructor, driver and operator, is a member of several teams within the department and serves as the treasurer for the Fire Department Association.

Following Futrell’s recognition of the two, Hopkinsville Mayor Wendell Lynch presented the two men with awards and congratulated them on their promotions.

Futrell then recognized Firefighter Andrew Watts as he was recently promoted to Fire Captain.

Futrell stated that Watts began with HFD in 2006 and was promoted to lieutenant in 2017.

Watts also presented an award from Lynch and was recognized and congratulated by the council.

Before Futrell moved on to share with the council about Fire Captain Bill Nightingale’s recent retirement, the chief wanted to present the council with two men who had passed a milestone within the department.

“We actually had a milestone recently in the fire department with a couple of employees and the mayor and myself thought that we should really acknowledge that,” Futrell said.

Futrell called Battalion Chief Michael Henderson and Engineer Anthony Harris to come forward before the council to share that both men had recently achieved 25 years with the fire department.

“I have worked with both of these gentlemen my entire career because they started before me and they hit their 25 years recently,” Futrell said of the two men.

Lynch then read award certificates for the two men and thanked them for their continued years of service to Hopkinsville.

Futrell continued on as he recognized Nightingale in his recent retirement from the department.

“Please know that your city and its citizens were well protected under (Nightingale’s) service,” Futrell said of Nightingale. “In his career, he has been unwavering in his dedication to the city and the men and women of the Hopkinsville Fire Department.”

Futrell then spoke to Nightingale’s family as he thanked them for his service to the department.

“Be proud of Bill and know that he has brought honor to your family by his selfless nature and heroic acts,” Futrell said. “Bill has ever been more than just a firefighter, he’s our friend and our brother and always will be.”

Nightingale received a standing ovation from the crowd for his service before Lynch presented him with an award and thanked him for his time at HFD.

The council and the mayor then presented awards to Hopkinsville Parks and Recreation for two awards the department recently earned at the Kentucky Recreation and Parks Society state conference.

Lynch presented Parks and Rec Superintendent Tab Brockman with the KRPS Department of the Year award for his department as well as the KRPS Outstanding Facility Award for the Planters Bank-Jennie Stuart Health Sportsplex Hopkinsville.

Lynch commended the Parks and Rec department for its service to the people through the COVID-19 pandemic and earning the top awards amidst the pandemic’s hardships.

“That did not dampen your resolve and you all hung in there and continued to do what you had to do to serve your clients and we are so proud of you,” Lynch said. “And, this year, as we are trying to come out of COVID, to walk away with the best hardware is really amazing.”

Brockman took the opportunity to say that the awards are for the city and its partnerships and teamwork rather than being for the department itself.

“It’s a community award, because we are not able to do what we do without the support of everyone else in Public Works, our friends at the fire and police department, without the Sheriff’s department, street department — we all come together to make events happen,” Brockman said. “So, it’s an award for the city.”

In other council business, the council voted on the second reading of an ordinance detailing the refinancing of two city bonds that would essentially result in over $1 million in savings over several years.

Hopkinsville Chief Finance Officer Robert Martin and Baird Public Finance Director Mark Rawlings both explained to the Committee of the Whole in October that the city has two bonds that are now available to be refinanced at lower interest rates.

Martin continued to explain during that meeting, that 10 years ago, the city had two separate bonds that were essentially combined into one bond, but the two had separate amortization schedules and became known as Series 2011A and 2011B Bonds.

Martin also explained at that time that 2011A contains two leases and financed construction of the Tie Breaker Family Aquatic Center park, purchase and renovations to the Public Works building and construction of Gander Memorial Park for Fort Campbell soldiers as well as financed the original renovations to the Old First City Bank Building. The 2011A bond is set to mature by 2036.

While 2011B was originally issued to finance construction of the Municipal building. The 2011B bond is set to mature by 2037.

“Just to let you know how much is left on these bonds, on the 2011A bond, the portion that is for the water park, public works building and Gander park, there is a principal balance of $1,345,000 left,” Martin said at the committee meeting. “Of that, approximately 70% is for the water park.

Rawlings then explained that the savings from refinancing those bonds were estimated to be $120,000 or roughly $8,500 per year for the Series 2011A Bonds as well as a reduction in the interest rate of the bond from 3.4% down to 1.42%.

Rawlings explained that the interest rate decreases are estimated on the current market and the city is looking to sell those bonds in the near future to secure the refinancings.

“We’re looking at a bond sale in the first week of December, right after coming out of Thanksgiving,” Rawlings said. “Hopefully, we’ll lock in a very low interest rate at that point and from there, they will replace these bonds and the city will then make the payment on the new bonds.”

During Tuesday’s council meeting, the committee voted unanimously to accept the second reading of the refinancing ordinance, forwarding it to a second reading.