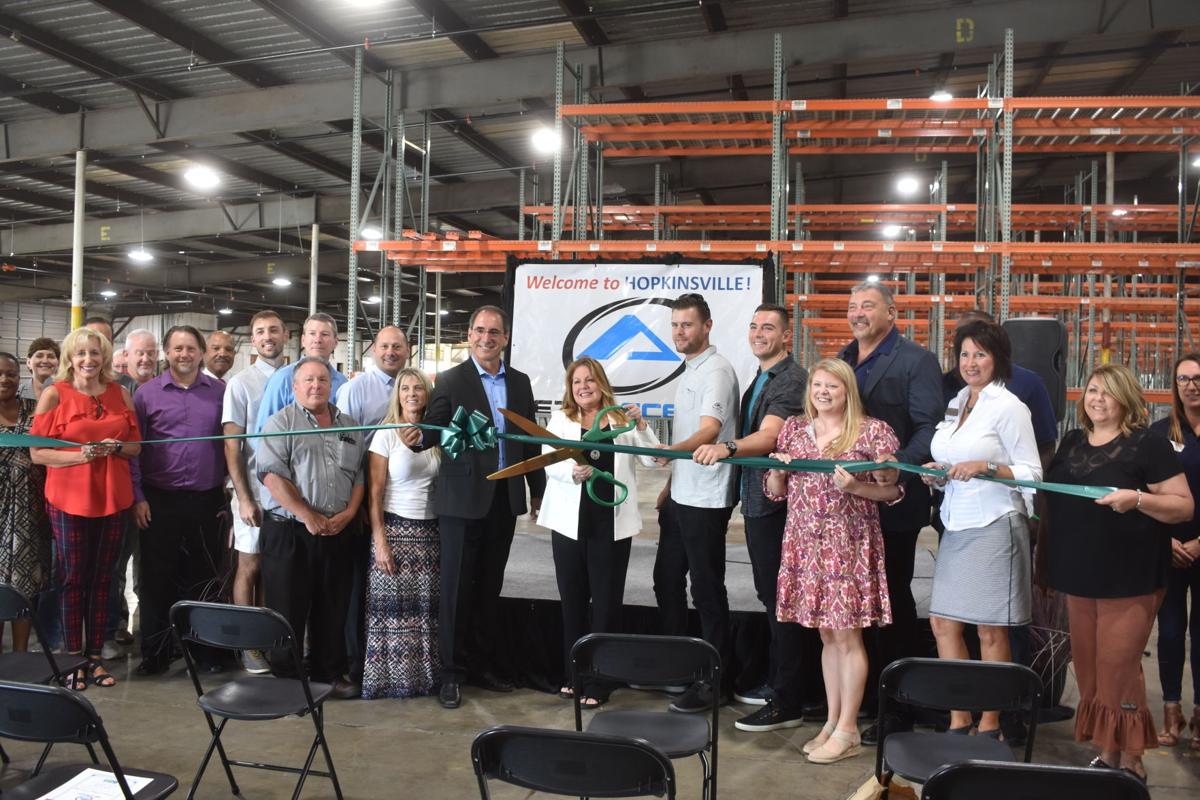 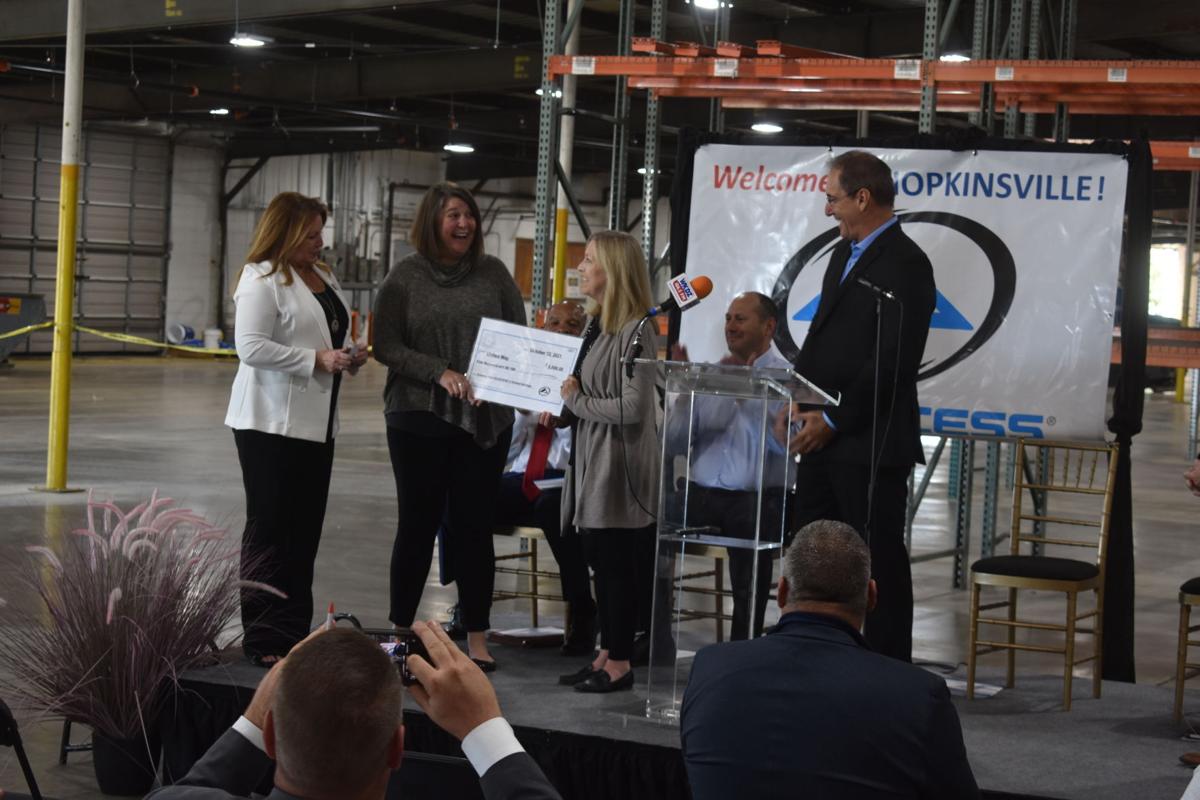 Everard (right) and Sandvold (left) present a $5,000 donation to United Way of the Pennyrile Co-Chairs Brooke Jung (center left) and Betsy Bond (center right) for this year’s United Way campaign as a way to show EZ-ACCESS’s commitment to the area as well as reflect their desire to give back to whatever communities it operates in.

Everard (right) and Sandvold (left) present a $5,000 donation to United Way of the Pennyrile Co-Chairs Brooke Jung (center left) and Betsy Bond (center right) for this year’s United Way campaign as a way to show EZ-ACCESS’s commitment to the area as well as reflect their desire to give back to whatever communities it operates in.

Chamber members, Hopkinsville City Council members, Christian County magistrates and EZ-ACCESS officials, family and friends gathered inside the business’s facility located at 2230 Pembroke Road to host the cutting and hear from local officials welcoming them to the area.

SWK EDC Executive Director Carter Hendricks began the event by welcoming EZ-ACCESS officials and those in attendance to Hopkinsville and Christian County before sharing about the business and what it means for the area.

Hendricks began by explaining the process of how EZ-ACCESS gained interest in Hopkinsville and how the deal had been closed after the business discovered the facility it would house on Pembroke Road.

“They found their way to this location and those that are from this area know that this used to be a tobacco warehouse staffing approximately five, 10, 15 people at peak season, maybe 20,” Hendricks said.

“Well, now it’s going to be a distribution facility and a light manufacturing facility employing nearly 100 people between the two buildings. That’s the type of economic growth and development that really makes a big impact in our community and region and we are excited about that.”

Hendricks then invited Hopkinsville Mayor Wendell Lynch to speak on behalf of Hopkinsville and county government on their part in securing the business expanding in this region of Kentucky.

“This has been a team effort and I can’t over-emphasize how much that is the case,” Lynch said. “Because, when we pull together all the parties that have a stake in this … we talk about the things that make a product happen and all those things have taken place over the last year and we are now ready to cut the ribbon on this project that is really a wonderful thing for Hopkinsville.”

EZ-ACCESS Owner and CEO Don Everard then took the stage to share his appreciation for the Hopkinsville and Christian County area as well as his and the company’s excitement for the expansion here as the area is exactly what he and his partners hoped for.

Militia leader on when they would rise up

“We are excited about Hopkinsville and Christian County,” Everard said. “Over the past 10 years of being in Kentucky, we were looking to expand our operations a bit south. When we looked around, we looked for a city and county that we felt would align with our values.

“We trusted God to lead us to a place where we could be sure had faith in God, family values, a desire to invest in the community, belief in the values of people, hard working and wants to make a difference in the lives of others. That’s what we were looking for and that’s what we found here in Hopkinsville.”

After sharing a little more about the company and the business being excited to begin operating in the local area, Everard took the opportunity to present a $5,000 donation to the United Way of the Pennyrile as a way to show EZ-ACCESS’s commitment to the area as well as reflect their desire to give back to whatever communities it operates in.

EZ-ACCESS is a family-owned and operated Washington State-based company that manufactures ramps and lifts for wheelchair accessibility for individuals with physical limitations and is a division of Homecare Products, Inc.

The industry expanding their operations in Hopkinsville will create between 75 and 100 new jobs and over $5 million in capital investment, according to SWK EDC.

The industry has been operating for over 37 years and is now a national leader in manufacturing ramps and lifts for wheelchair and accessibility solutions for individuals with physical limitations.

EZ-ACCESS also has two other Kentucky locations in Morganfield and Henderson that the company expanded to in 2009 and 2019.

Everard shared during the event that EZ-ACCESS ships products to every state within the United States as well as all over the world.