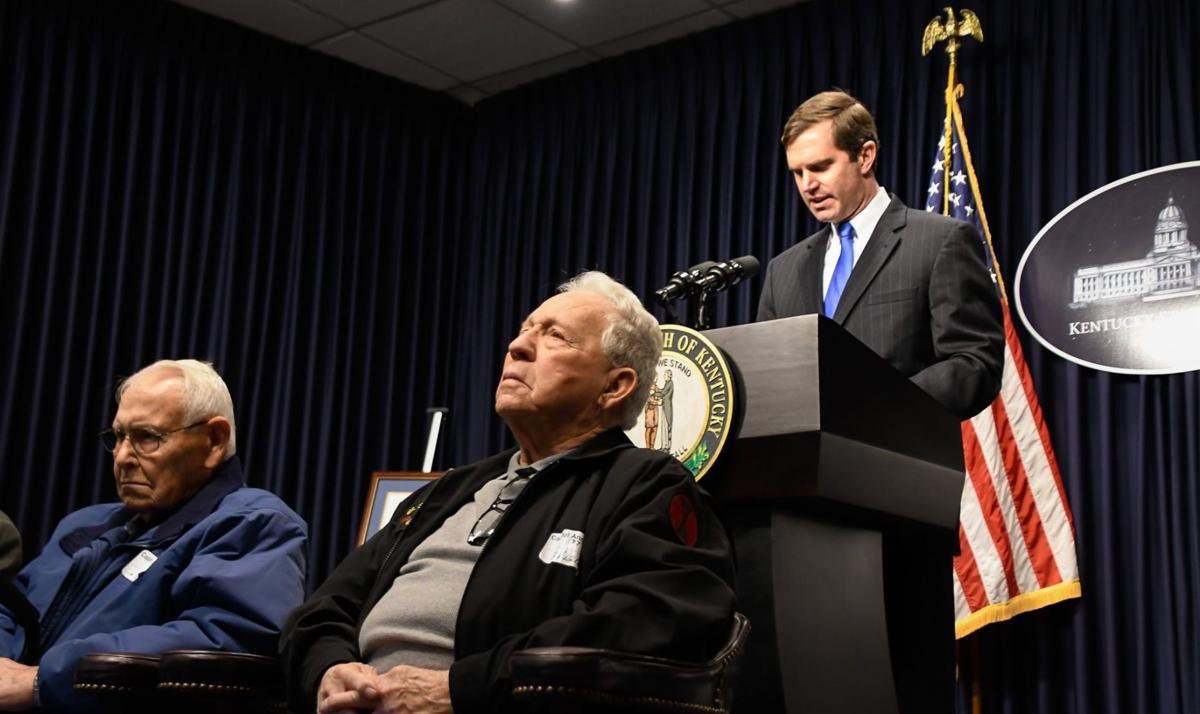 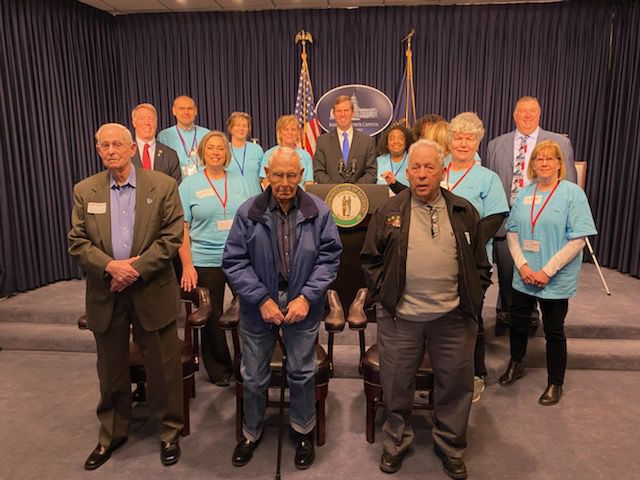 World War II veterans (from left) Elwood Richardson, a resident of Chapel House in Hopkinsville, Henry Breithaupt, Crofton, and Jim Ethridge, Cadiz, smile in front of Gov. Andy Beshear and service coordinators Wednesday at the state Capitol in Frankfort where each veteran was honored as a Kentucky Colonel.

World War II veterans (from left) Elwood Richardson, a resident of Chapel House in Hopkinsville, Henry Breithaupt, Crofton, and Jim Ethridge, Cadiz, smile in front of Gov. Andy Beshear and service coordinators Wednesday at the state Capitol in Frankfort where each veteran was honored as a Kentucky Colonel.

“We can never do enough to thank these veterans who, as young men, risked their lives to stand up to tyranny and forever changed the course of history,” Beshear said. “I am honored just to be in their presence. As a small thank you for their selfless service to our nation, I am proud to honor each of them as a Kentucky Colonel.”

Breithaupt served from 1946-1967 in three wars protecting our country: World War II, the Korean War and the Vietnam War. After his service, he was a truck driver until his retirement in 1999.

Richardson spent 21 months overseas in the Asiatic-Pacific Theater of Operations. He is entitled to wear the American Theater ribbon with two bronze stars, Philippines Liberation ribbon, Good Conduct medal, and the Victory medal. Corporal Richardson served in the Pacific in New Guinea and in the Philippines. He and his regiment were on their way to invade Japan when bombs were dropped on Nagasaki and Hiroshima ending the war. After the war ended, he assisted Bataan Death March prisoners of war prepare to return home. After discharge from military service, he worked in South Bend, Ind., and eventually returned to Hopkinsville.

The title of Kentucky Colonel dates back to around 1813. The Kentucky Militia had just returned from a highly successful campaign during the War of 1812. When the Militia disbanded, Governor Issac Shelby commissioned Charles S. Todd, one of his officers in the campaign, as an Aide-de-Camp on the governor’s staff. Todd’s official rank and grade was Colonel.

Today, Kentucky Colonels are talented and capable men and women appointed by the Governor of the Commonwealth of Kentucky because of their service to the state and country. They act as the governor’s ambassadors of Kentucky’s rich history and culture across the world.

Lela Hale, local service coordinator for the veterans, said the experience was “the best day ever.”