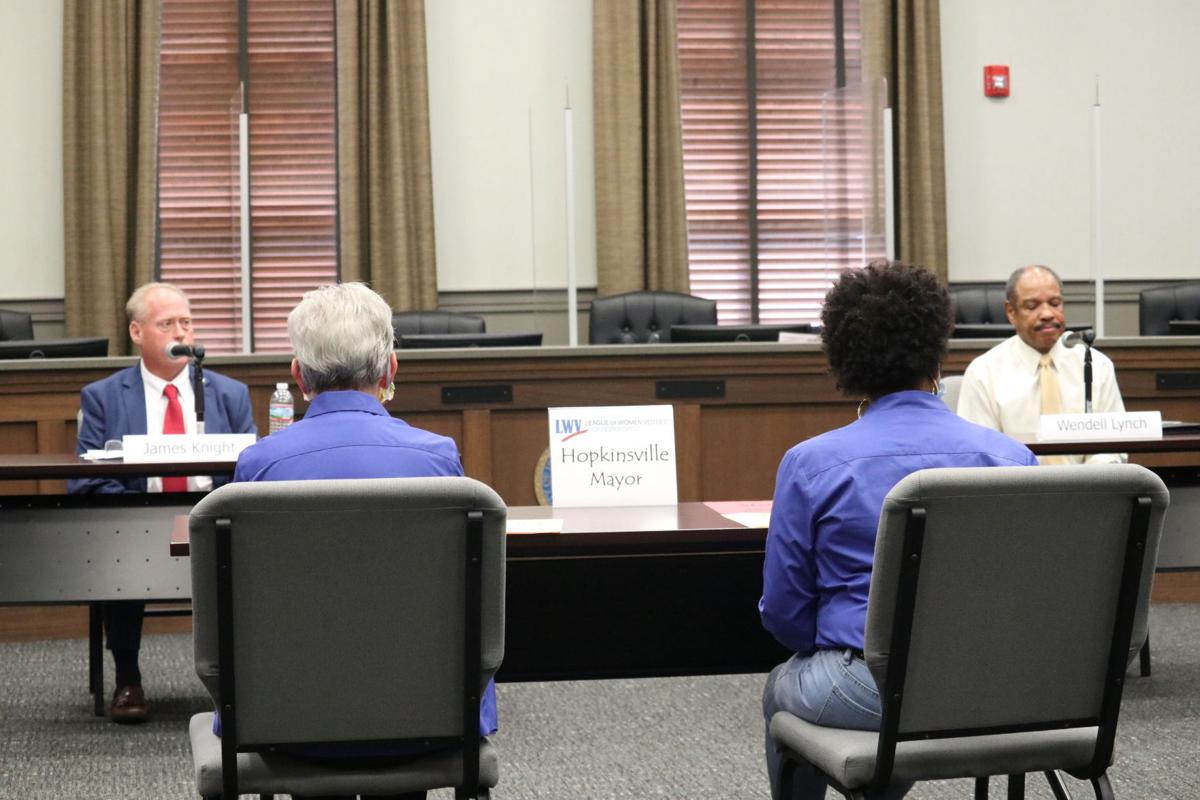 Hopkinsville mayoral candidates James Knight and Wendell Lynch participate in a forum Tuesday put on by the Hopkinsville League of Women Voters. Independent candidate Walter Shamble announced his withdrawal from the race due to health issues. 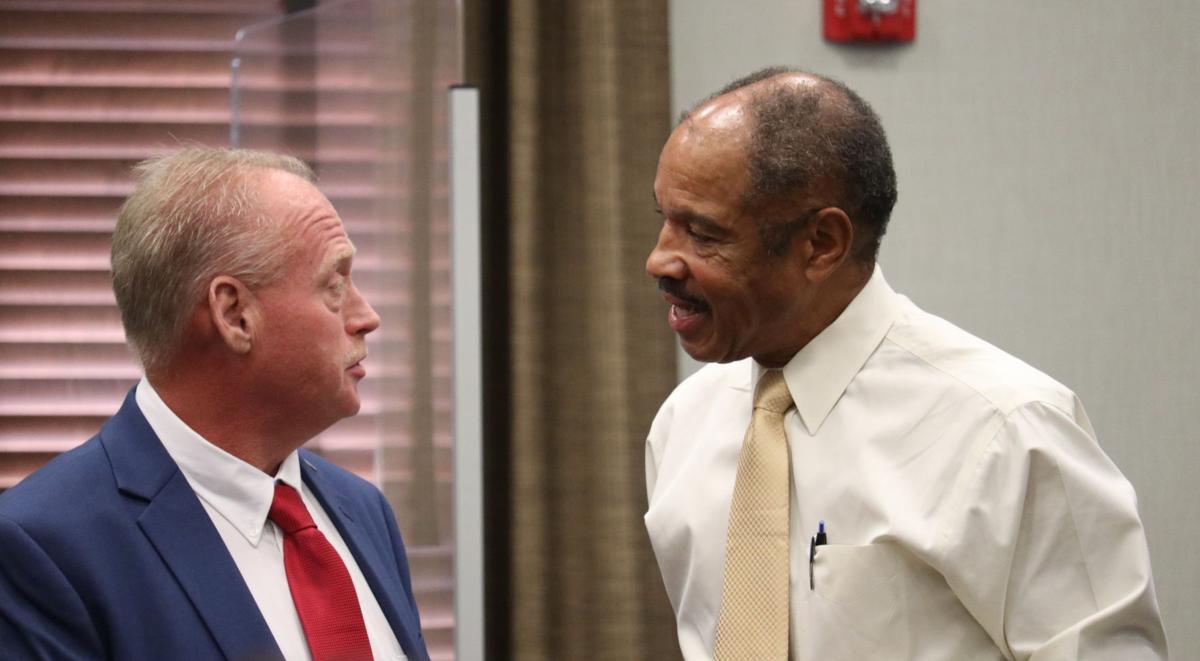 Knight and Lynch greet each other after the forum, which was closed to the public due to COVID-19, but livestreamed online. All of the candidate forums will be available for viewing on the City of Hopkinsville website.

Hopkinsville mayoral candidates James Knight and Wendell Lynch participate in a forum Tuesday put on by the Hopkinsville League of Women Voters. Independent candidate Walter Shamble announced his withdrawal from the race due to health issues.

Knight and Lynch greet each other after the forum, which was closed to the public due to COVID-19, but livestreamed online. All of the candidate forums will be available for viewing on the City of Hopkinsville website.

Mayoral candidates Wendell Lynch (D) and James R. Knight (R) met Tuesday during the first of a series of candidates debates hosted by the Hopkinsville League of Women Voters.

Lynch, who is currently serving as interim mayor, reiterated his desire to continue in the position if chosen in the general election Nov. 3.

Lynch said his vision as mayor of Hopkinsville is to focus on education, employment, promoting homeownership and neighborhood revitalization, supporting local businesses and reducing the crime rate.

Knight, a local farmer and family business owner, said he and Lynch both have great ideas for the city but different ways to get there.

Knight said he will always have an open-door policy in the mayor’s office if elected, and it is his goal to “reign in any unnecessary spending,” work with the schools and community college to grow the local workforce and also to support local businesses.

“It will be a year before some of these survivors dig themselves out of the debt they have incurred,” he said of the economic impact of the COVID-19 pandemic. “It is important to me that any federal or state money we receive for financial relief (from COVID-19) be given to those with the most skin in the game and the most to lose, be it small businesses or large industry.”

Knight said he does not believe in raising taxes or using tax dollars to benefit the private sector.

Both candidates are hoping to secure the rest of the two-year term left vacant by Carter Hendricks, who resigned in January for a new job. Whomever is elected will take office at the first of the year.

When asked about how to help low-income residents and the homeless population, Knight said the city must widen the tax base and put COVID-19 relief funds toward helping residents in need.

“Everybody needs more income, they need more opportunity and a better way of life,” he said.

Lynch said one way to uplift those who need help is industrial improvement and to make the city more attractive so businesses will locate here.

“That opens of jobs and makes them more competitive,” he said.

Additionally, Lynch said the city as a whole must continue to support agencies like the Salvation Army and United Way, which provide services to those in need.

Both candidates said they would support sidewalks being installed along Fort Campbell Boulevard and the further expansion plans for the Hopkinsville Rail Trail.

Every Supreme Court justice of the past 50 years

Dr. Fauci warns: 'We are going in the wrong direction'

They both highlighted how proud they were to see the new sidewalks on LaFayette Road.

“It’s refreshing to see young kids on bicycles with their parents,” he said, noting that a similar project on the boulevard would not be an easy undertaking. “It would cause quite a bit of disruption, but we would appreciate it when it’s done.”

The next question tackled a heavier topic about racial issues in Hopkinsville.

After a long pause, Knight said there is racial injustice everywhere.

“What we see happening in other cities and Kentucky has not happened in Hopkinsville, but I would do my best to make sure we don’t have a racial divide,” Knight said. “We all bleed red and we are all one.”

Lynch said the city does have racial issues that he hopes to address in a forum.

“I plan, along with other leaders, to have the Unity Summit when COVID-19 dies down,” he said. “We need to support peaceful protest. When people have something on their mind, we don’t need to shutter that. We need to open the opportunity for that and listen.”

The candidates were then asked about their stance on nonpartisan elections while keeping the wards in place.

Lynch said on the surface nonpartisan elections sound like the way to go, but more studying needs to be done before he would support it.

“The issue in the black community is that it seems to whitewash the council in other cities and we need to make sure that doesn’t happen here,” Lynch said.

Earlier this summer, Lynch used his veto power as mayor to negate the city council’s passage of a nonpartisan elections ordinance in Hopkinsville. Lynch said he wants to form a committee to further research the matter.

Knight, a Republican, said he believes the city should keep the party structure in place, but he thinks the citizens should be given time to educate themselves on it and vote for or against it.

“I would support putting this on a ballot,” Knight said. “It’s up to the people to make their mind up, not for 12 people to decide for them.”

Currently, the issue must be voted on by the city council.