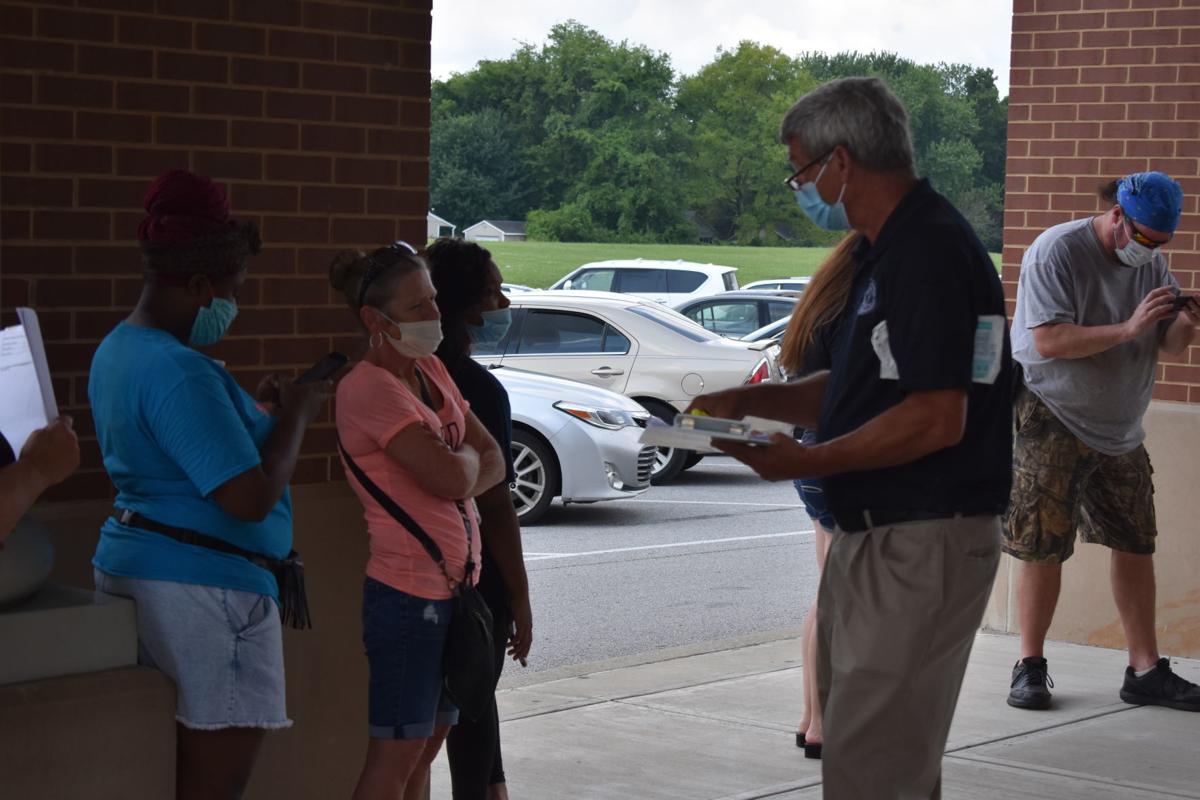 Citizens receive help regarding their unemployment claims from a labor cabinet worker Tuesday at Christian County Middle School. The site will be open again from 9 a.m. to 5:30 p.m. Wednesday. 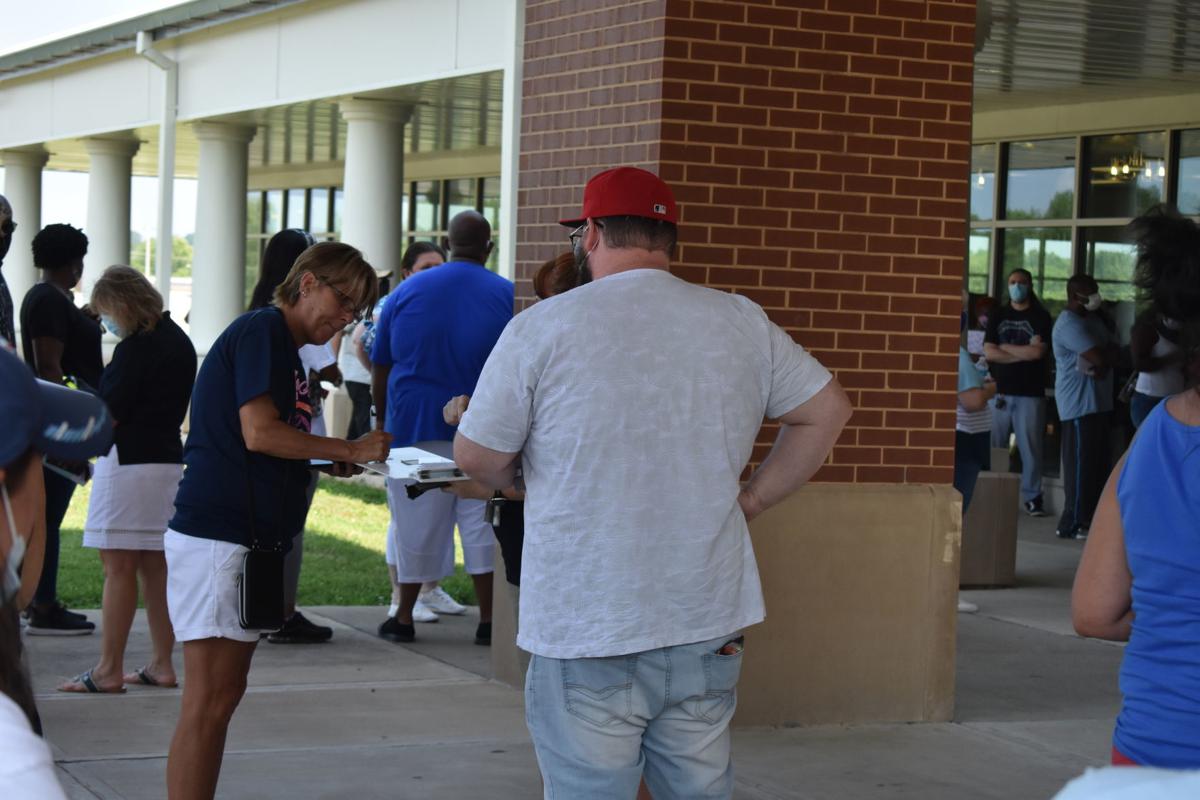 A citizen checks in for his appointment to receive assistance with his unemployment claim. 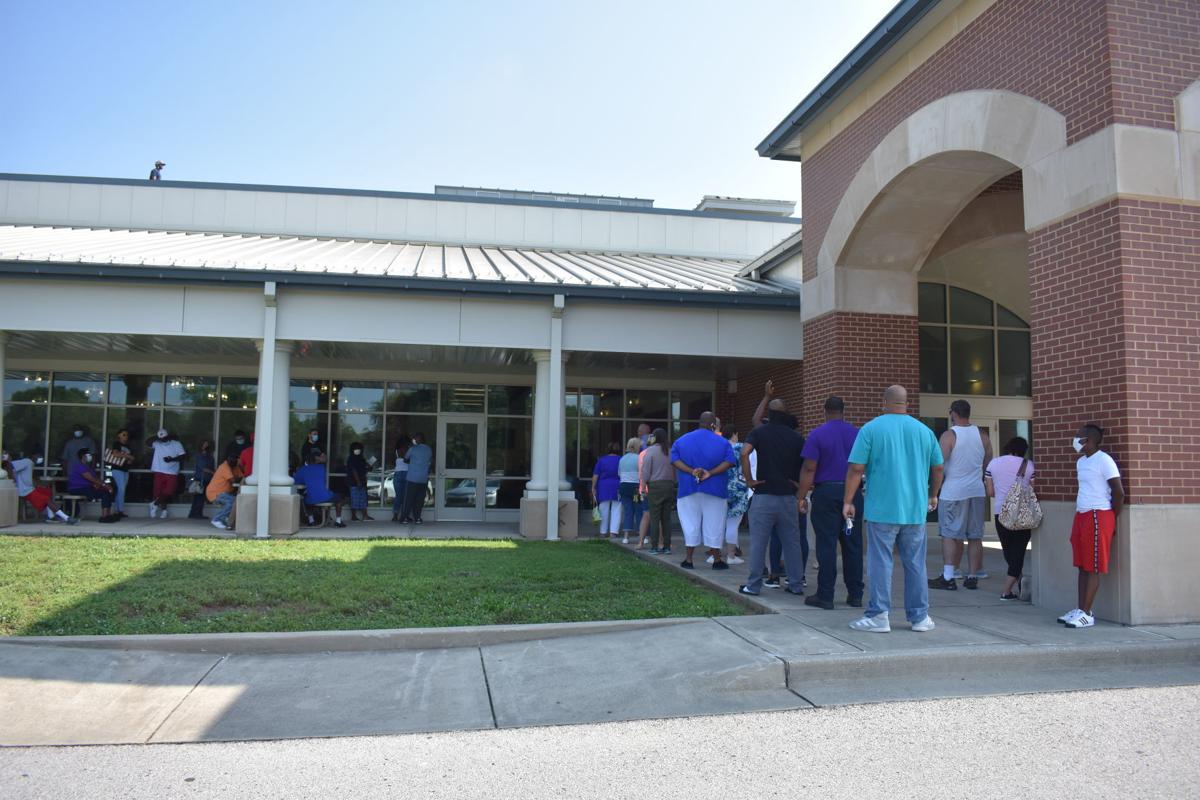 Citizens wait in line Tuesday at Christian County Middle School to get help with their unemployment claims.

Citizens receive help regarding their unemployment claims from a labor cabinet worker Tuesday at Christian County Middle School. The site will be open again from 9 a.m. to 5:30 p.m. Wednesday.

A citizen checks in for his appointment to receive assistance with his unemployment claim.

Citizens wait in line Tuesday at Christian County Middle School to get help with their unemployment claims.

Despite it being the middle of the summer, Christian County Middle School was busy as ever Tuesday, as a plethora of citizens waited in line for help with their unemployment claims.

The pop-up, in-person assistance in five locations, including Hopkinsville, came after Gov. Andy Beshear announced June 29 that 90% of unemployment claims from March to May had been processed.

William Palmer of Hopkinsville and Chad Kyle of Muhlenberg County were two people in the 10% of claims that still needed processing.

Palmer had been working on getting money from his unemployment claim since March and said Tuesday he had not received practically any help up until coming to the Christian County Middle School location.

“(I’ve been) trying to log into the system, filing claims and really just wasn’t getting any answer or reply back,” Palmer said. “(I’ve been) calling the head office and getting no response back from them. I left an in-voice for them to call me back and they never call me back, and when they did call back, it was just the in-voice so there was nobody to talk to.”

Kyle had also been waiting since March. He had no issues with filing the claim, but has yet to see any checks from it.

Kyle called for help, but that came to no avail.

“I think one day I called the hotline over 300 times and never got ahold of anybody or got any callbacks,” Kyle said. “As a matter of fact, I’m still getting automated messages at their closing time in the evening that I’m still in the wait queue to be called back.”

Both Palmer and Kyle have a family, and with kids to take care of, the financial burden they’ve faced has been hard to deal with adequately.

“Raising kids and having to pay bills and stuff man, without having the savings, it was real tough,” Palmer said. “I had to lean on family to get help to get me all the way up until this point now.”

The two came to the location with one simple goal in mind — to finally receive some clear communication and get the money they’re owed to end their monetary struggles.

“Hopefully it gets resolved that way I can get some money and get some bills caught up and try to get back to somewhat kind of a normal life like I was having before everything happened,” Kyle said.

Upon arriving at the location, citizens checked in if they had made an appointment and then waited in line with a mask on while social distancing.

For those who didn’t have an appointment they were able to schedule one for Wednesday or stand in a different line than those who had appointments and awaited assistance.

While the site opened earlier than planned and got off to a smooth start, staff still fell behind by 10:30 a.m. due to the large quantity of people at the location.

The site is set to typically close at 6 p.m., so the labor cabinet workers and assistants can assist as many people as possible.

If someone is still in need of assistance, the Hopkinsville site will be open from 9 a.m. to 5:30 p.m. Wednesday.

Appointments for in-person assistance can be made online at kcc.ky.gov, click the “view services” button under “In-Person UI Services” and then click the “schedule appointment” button. If you don’t make an appointment you will still be able to receive assistance.

Two forms of identification, like a driver’s license or other photo ID, and social security card will need to be brought to the location.