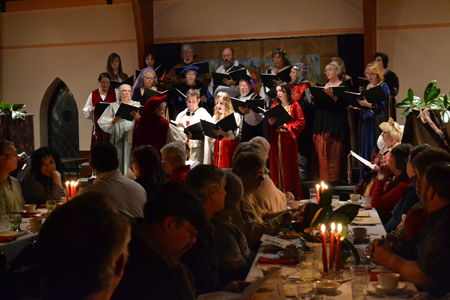 Steve Wiggin leads the Hopkinsville Madrigal Singers in song Thursday at Grace Episcopal Church. Wiggin and his wife, Connie, have been hosting the Christmas Madrigal Feaste for 34 years. 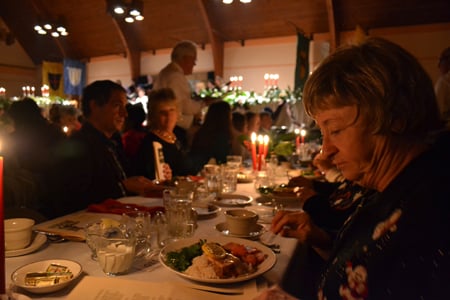 Steve Wiggin leads the Hopkinsville Madrigal Singers in song Thursday at Grace Episcopal Church. Wiggin and his wife, Connie, have been hosting the Christmas Madrigal Feaste for 34 years.

Connie, along with her husband, Steve Wiggin, hosted their 34th Christmas Madrigal Feaste, but this year was a little more special than the last.

Connie said she doesn’t remember much of last year’s dinner because she was dealing with colon cancer.

“I had just had surgery,” she said. “But, I founded this thing and I was going to be here.”

She threw on her medieval attire and put on a brave face, but truth be told she was in pain.

This year, her smile was a little brighter, and she made it her duty to greet all 128 guests who attended.

“I am very, very blessed,” Connie said. “I am totally cancer-free.”

The show went on without a glitch. Nineteen madrigal singers and two trumpeters led the guests through eight fanfares — each signaling a different part of the meal.

A band of waiters moved about the room serving wassail, venison and Christmas cake while keeping glasses filled to the brim.

Beth Mullen, Hopkinsville, had been to the feaste for the past eight years. Each time, she said, is special because it brings together family and friends.

See how RBG's trainer honored her

“We don’t give a lot of gifts so this is something we can do together,” she said.

Thursday, she brought her friend of 40 years, Alice Pryor. Both were impressed with the show.

“This is one of the best ones we’ve been to,” Pryor said. “I especially liked the ‘12 Pains of Christmas’,” which was a new addition to the show.

Guests laughed as the Hopkinsville Madrigal Singers let loose toward the end and sang about 12 things that annoy them during the holidays. Some included in-laws, month’s worth of bills and those pesky Christmas lights that never seem to untangle.

The crowd listened intently as the singers graciously bade them farewell. Steve Wiggin took a bow and the singers exited swiftly.

The candles continued to burn out as guests left the banquet hall laughing and mingling with old friends and new. Connie was all smiles as she hugged everyone goodbye.

“Everybody that comes gets to know somebody else,” she said. “It’s a lot of camaraderie here and everything went beautifully.”