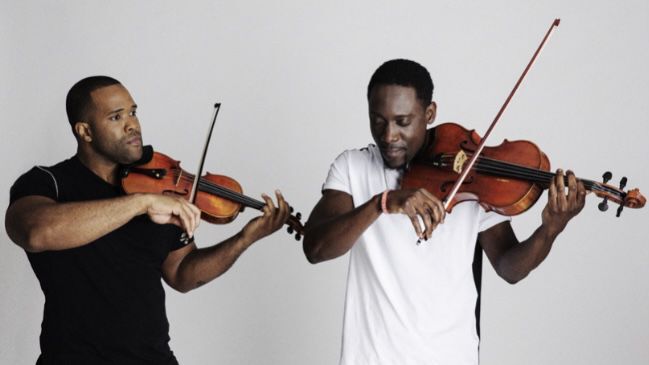 Kev Marcus (left) and Wil Baptiste are set to perform at the Alhambra Theatre on Feb 4. The two violinists have merged classical musical and hip hop that has produced such a unique sound. The show will be begin at 7 p.m. Tickets are on sale now at $50 per seat. 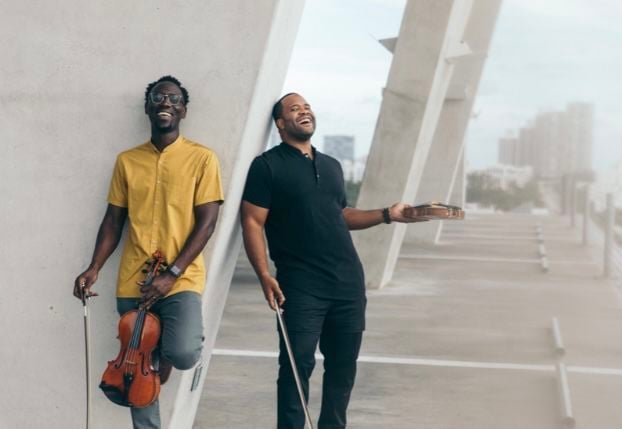 Kev Marcus (left) and Wil Baptiste are set to perform at the Alhambra Theatre on Feb 4. The two violinists have merged classical musical and hip hop that has produced such a unique sound. The show will be begin at 7 p.m. Tickets are on sale now at $50 per seat.

Save the date folks. On Feb. 4, the dynamic duo Black Violin will be in town performing at the Alhambra Theatre. The show will begin at 7 p.m., while the doors will open at 6. Black Violin was joined together by two violin artists named Kev Marcus and Wil Baptiste. The duo is known for its distinct sound that consists of classical-meets-hip-hop melodies. For over 18 years, Black Violin have merged string arrangements with modern beats and vocals. The two met in orchestra class at Dillard High School in Fort Lauderdale, becoming classically trained on the violin and viola through high school and college.

Since college, the duo has reconvened to produce beats and build an audience in local clubs. In 2005, Black Violin went on to win Showtime at the Apollo. From that moment on, it led to sold out headline performances at venues across the country. Their unique brand of merging the genres of both hip hop and classical music has swept the world by surprise. The duo’s latest album Take The Stairs released November 1, 2019. The album debuted at #1 on the Billboard Classical Chart, #1 on the Billboard Classical Crossover Chart, #7 on Billboard’s Top New Artists Chart, and #9 on the Billboard Hip Hop and R&B Chart. Their latest record, Stereotypes also debuted #1 on Classical Crossover Chart and #4 on the Billboard R&B Chart. And though Take The Stairs was released in 2019, it had aged like fine wine. In 2021, Take the Stairs was nominated for Best Contemporary Instrumental album at the 2021 GRAMMY awards. The group have not only received their flowers among fans and live performances, the two have also been celebrated with collaborations with artists such as Alicia Keys, Wu Tang Clan, 2 Chainz among many others.

Kev and Wil proclaimed their group name Black Violin in honor of the late great Leroy “Stuff” Smith who named his last album “Black Violin” before he passed. The duo viewed “Stuff” Smith with much respect as a musician that brought such passion and soul to what’s considered a “classical instrument”. Wil and Kev have toured the world because of the talent they possess.

“The stereotypes are always there, embedded so deep in our culture,” Wil said. “Just by nature of our existence, we challenge those ideas. It’s a unique thing that brings people together who aren’t usually in the same room, and in the current climate, it’s good to bring people together.”

American for Prosperity calls on Kentucky to decriminalize marijuana possession

'The worst of my life': Florida woman recalls bear attack

Music is known to have several healing powers such as calming the mind from stress, anxiety, as well various health related conditions. Music also has the ability to merge cultures together as one in unity as a true community of universal language. Before the pandemic, Black Violin toured extensively, playing over 200 shows a year. In many of their tours, they held performances for young low-income students in urban communities. In these years prior, in 2019 alone, the group played for over 100,000 students. Often, the duo will work alongside a youth orchestra in the market, bringing them on stage for a performance. The youth who had the honor to perform alongside Black Violin have been made aware that classical artists can be themselves authentically no matter the age, race, gender, or economic background.

Pennyroyal Arts Council said this upcoming show has been made possible thanks to a grant from South Arts. There is also a special thanks to our LIVE Platinum sponsor Planters Bank and Gold sponsors Hughart, Beard & Giles Funeral Homes, HES EnergyNet, Jennie Stuart Health, Rogers Group, HWEA, Pennyrile Radiology, and Bluegrass Beverage for their generosity.

Prince once said “Music is healing. Music holds things together.” In a few short weeks, Feb. 4 will be a night to remember. Black Violin cultivates an energy that transcends beyond limiting beliefs. The duo will be along their onstage DJ SPS as well as Nat Strokes their drummer. Be sure to grab your tickets before the show sells out. Tickets are available for purchase online: https://pennyroyalartscouncil.ticketspice.com/black-violin