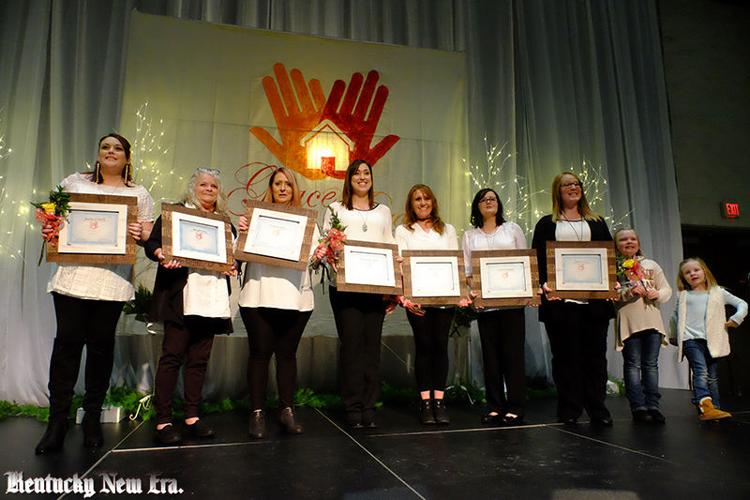 The recent Grace and Mercy graduates pose for a photo after the 3rd annual Banquet and Graduation Ceremony. They are (from left) Michelle White, Melissa Hale, Cynthia Powell, Brandi Marie Smith, Scarlett Hopper, Denise Freeman and Jessica Little. This was the second graduating class, but the third year to celebrate Grace and Mercy. They asked for help to raise the funds to pay for their new home, which is at 1507 South Main St. 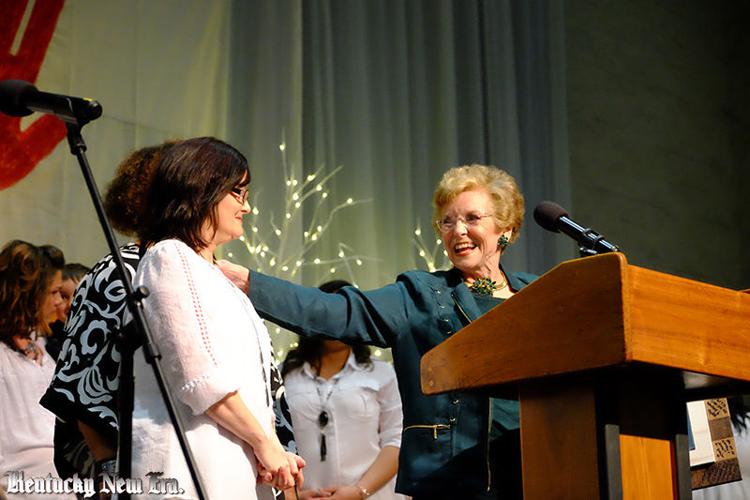 The recent Grace and Mercy graduates pose for a photo after the 3rd annual Banquet and Graduation Ceremony. They are (from left) Michelle White, Melissa Hale, Cynthia Powell, Brandi Marie Smith, Scarlett Hopper, Denise Freeman and Jessica Little. This was the second graduating class, but the third year to celebrate Grace and Mercy. They asked for help to raise the funds to pay for their new home, which is at 1507 South Main St.

Dressed in black and white clothes, seven women shared their stories of life before they went to Grace and Mercy, and how their lives have changed as they graduated from the faith-based transitional home Thursday night.

These women were the second class to graduate during the annual banquet in the James E. Bruce Convention Center.

The eighth member of the graduating class, Tiffany Hibbs, was unable to be there due to an illness.

But the other seven told their stories.

Denise Freeman, the first to speak, is a 50-year-old woman who came from Mississippi.

“I never thought of being anywhere near Kentucky, much less living in Kentucky,” she opened.

She continued, saying her story before Grace and Mercy is a long one. It was a rough road, she said. It was a lot of chaos. The number one problems were drug abuse and her anger.

But since Grace and Mercy, her life has changed dramatically. She lived there for 14 months.

“If it wasn’t for the women, the love and the grace that they give. I’m telling you, I would not be where I am today,” she said.

She realized she needed the support the home offered and continues to reach out for it.

Freeman welcomed her husband onto the stage and added they’ve been clean for two years now. She added none of it would be possible without God. Neither one of them would be standing there on the stage tonight. Freeman’s daughter, who is now in Grace and Mercy’s program, would not be there if it weren’t for God.

“None of this would be possible without Him,” she said, which was met with a few Amens.

The next graduate, Melissa Hale, said she was a very selfish person. But, now she has gratitude, joy and content. She is also employed by Grace and Mercy now.

“I’ve been in and out of jail for a while. But last time I was sick and tired. So, I had to do something different,” she said.

She continued, saying her children needed her in their lives and shown a better way. She has four teenagers, a 6-year-old, a 4-year-old and an 11-month-old grandson. Today, she can show them something different and all but one lives with her because he is in college. Grace and Mercy helped her get to that point.

Jessica Little said she was broken, hopeless and lost. But Grace and Mercy gave her support ant taught her so much, such as being a mom

Cynthia Powell said this wasn’t her first treatment center. She’s been going since she was 17.

“I just found that you had to have something other than a group or something to rely on,” she said.

She added Jesus is the answer to everything, which was met by claps and cheers.

“I just want to thank Grace and Mercy for introducing me to Jesus,” Powell said.

Brandi Marie Smith said she came to Grace and Mercy broken and lost. But they showed her compassion. She wasn’t the easiest to deal with, but they still loved her, extended love of God to her and gave her peace. She said they are still her family because they always greet her with open arms each time.

She now works fulltime at a doctor’s office.

Michelle White started with, “God is so good.”He brought Grace and Mercy to where it’s at and brought her to the home, she said.

White continued saying she was a high school dropout and unemployed. Now she has her GED and is in college with honors.

The last speaker, Dr. David Gardner closed the banquet our saying the women at Grace and Mercy are the reminder that we can begin again.

But it’s not over. These women have graduated, but Grace and Mercy will have more coming in. They also decided to purchase the new home of Grace and Mercy, which will be 1507 South Main St. The old home housed 16 or 18 women. With this home, they can house 28 to 30 women.

“Construction will begin on that house in the next couple of weeks,” he said, adding they have been working on that project for over a year and can now proceed. “We need your help.”

He said whether his listeners give a dollar or $100, it is critical and appreciated.