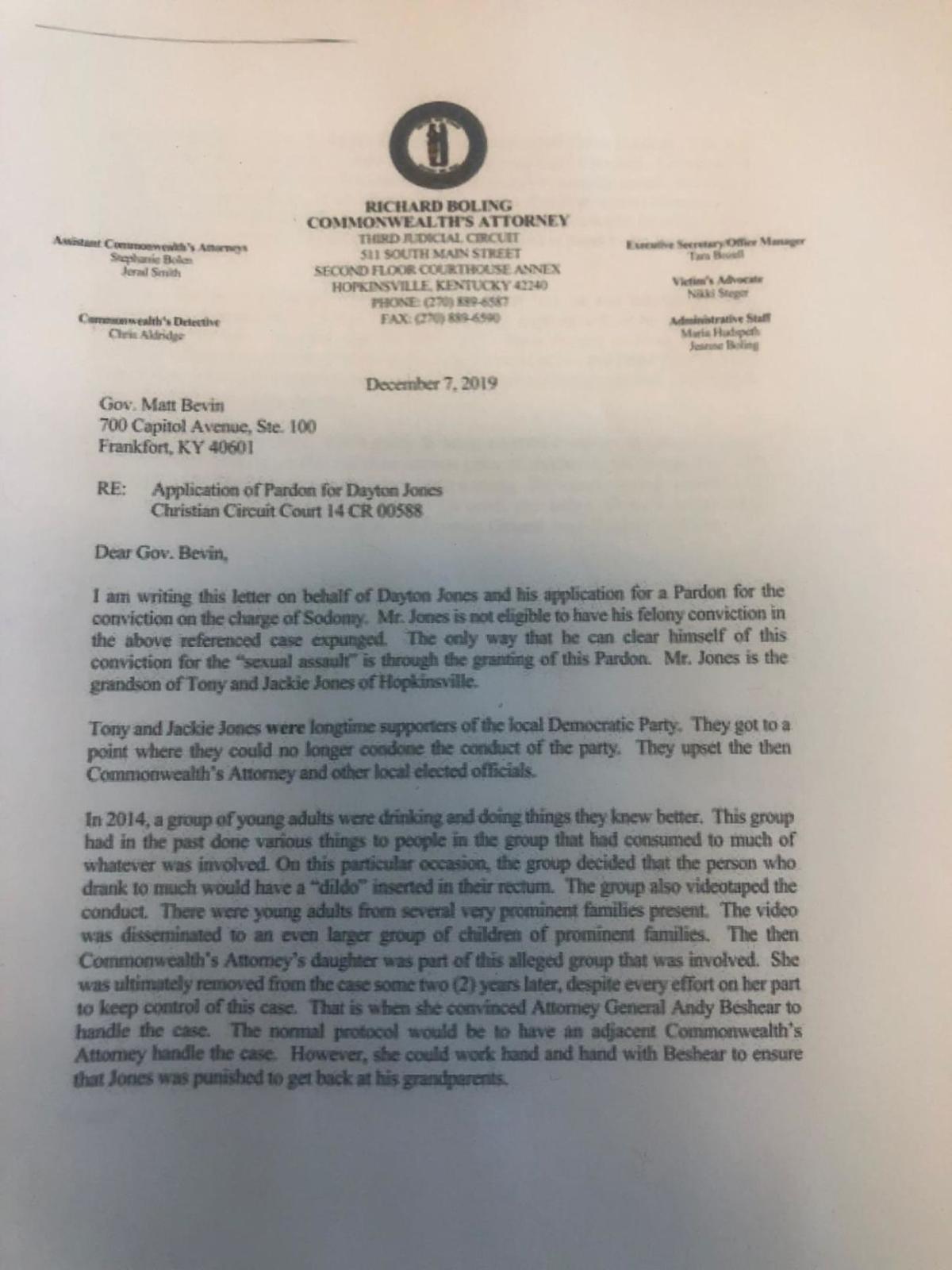 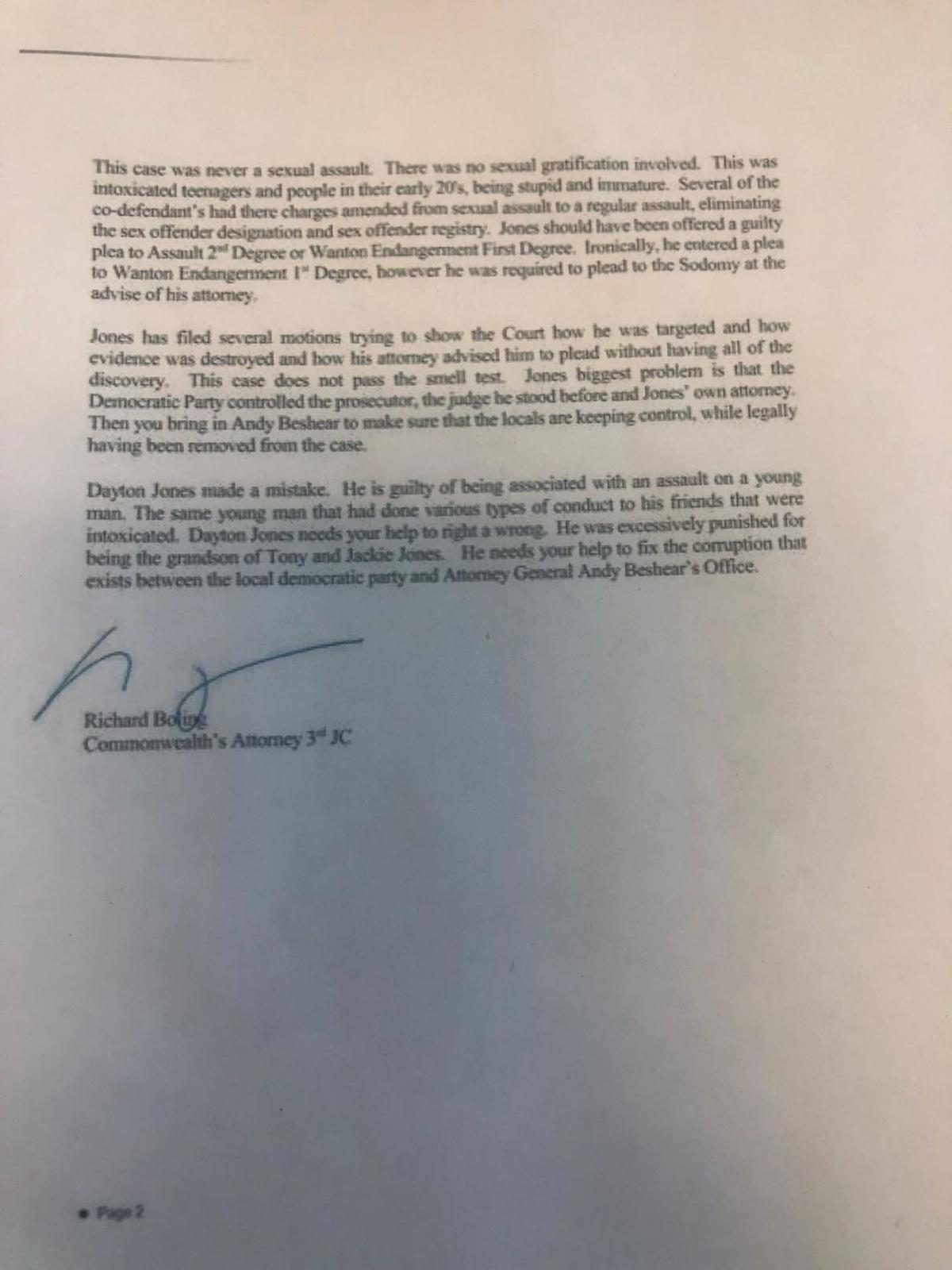 The letter Commonwealth’s Attorney Rick Boling wrote Dec. 7 asking former Gov. Matt Bevin to pardon Dayton Jones was released Thursday, and once the public was made privy to exactly what the local official said, Boling issued a statement saying the words were not his own but the “thoughts and beliefs” of Jones’ grandparents.

“I was approached by Mr. Jones’s grandparents to write a letter to Gov. Matt Bevin,” Boling said in the release Thursday evening. “They expressed to me their thoughts and concerns regarding the way the case was handled. It was my intent to advise Gov. Bevin of their beliefs and thoughts. However, I failed to specify that in my letter making it appear as if those were my beliefs and thoughts, and they are not. Unfortunately, I cannot fix this perception, at this point.”

Boling’s letter for the pardon

Two days before Bevin was set to leave office, Christian Commonwealth's Attorney Rick Boling wrote a letter to the governor asking him to pardon Dayton Jones.

According to the letter obtained by the New Era, Boling argued that the Democratic Party of Christian County, including former Christian County Commonwealth's Attorney Lynn Pryor, worked to give Jones a harsher sentence because the party was upset that Jones' grandparents, Tony and Jackie Jones, had switched to the Republican Party.

“Tony and Jackie Jones were longtime supporters of the local Democratic Party,” Boling said in the letter on his official Commonwealth’s Attorney letterhead. “They got to a point where they could no longer condone the conduct of the party.

“They upset the then Commonwealth’s Attorney and other local elected officials.”

Boling goes on to describe the teenage party in October 2014 which led Jones to eventually plead guilty to first-degree sodomy, first-degree wanton endangerment and first-degree distribution of matter portraying a sexual performance by a minor.

Three other young men were charged and convicted as well. They are all still in prison and did not get a pardon or commutation from the former governor.

Boling said that at the party the group of “young adults” decided to insert a sex toy in the rectum of the person who drank too much. The victim was 15 years old at the time of the incident.

The group filmed the action and the video was disseminated out to a large group of “children of prominent families,” Boling said.

In his letter, Boling claims that Pryor’s daughter was among the group that was involved.

On Thursday, Boling said he wrote the letter without having all the evidence in the case. However, his statement that Pryor’s daughter was at the party sounds similar to a letter Tony Jones wrote to Bevin on his grandson’s behalf in 2017.

“The victim in this case was good friends with Pryor,” Tony Jones wrote, noting that that fact was not brought to the judge’s attention until July 2016.

Pryor defeated then-incumbent Boling for the commonwealth’s attorney seat and served two terms before Boling won the seat back in 2018.

According to the Kentucky Registry of Election Finance, Tony and Jackie Jones together contributed $3,000 to Boling’s primary campaign in 2018.

Boling said in his letter that Pryor was eventually removed from the case: “that is when she convinced Attorney General Andy Beshear to handle the case. The normal protocol would be to have an adjacent Commonwealth’s Attorney to handle the case. However, she could work hand and hand with Beshear to ensure that Jones was punished to get back at his grandparents.”

Not a sexual assault

Boling’s comments once again mirror those of Tony Jones’ letter to Bevin.

“It merely involved a group of male friends who drank alcohol, got stupid, and tried to play a prank on one of their group, who himself drank too much and passed out,” Tony Jones wrote.

“There was no sexual gratification involved,” Boling said in the pardon letter.

According to KRS 510.110, a person is guilty of sodomy in the first degree when he engages in deviate sexual intercourse with another person by forcible compulsion or when the person who is incapable of consent because he is physically helpless. That statute has been effective since 1975.

“Now if you insert anything in someone’s rear end that would constitute sodomy,” he said of an amendment in 2018.

Boling said he was aware that a sodomy charge no longer required the act to be deviate sexual intercourse.

“To me, this was an assault,” he said. “I didn’t really have a problem with an assault charge because it was a physical assault that injured this person.”

Boling said several of the codefendants had their charges amended from a sexual assault to a regular assault, eliminating the requirement to be added to the sex offender registry. Boling claims that Jones pleaded to wanton endangerment (first degree) but was required to also plead sodomy “at the advice of his attorney.”

Tony Jones said that as the trial date approached, the victim’s general counsel, Sands Chewning, offered to negotiate a monetary agreement. Jones claimed that the monetary amount started at $1 million but dropped to $300,000 just before the trial date.

In Jones’ words, the $300,000 agreement would also include the victim dropping the sex offender charges.

“Although we were feeling forced into an agreement that should have never been an issue, the agreement never materialized,” Jones said.

In a phone interview with the New Era Thursday, Chewning said that the $300,000 "offer" came from the defendants. He said that the victim never asked for a monetary sum.

He added that the victim's family did agree to a plea deal which included $300,000 in restitutions. But the Attorney General's office rejected the offer proposed by the defendants.

Boling alleged that both Pryor, the judge and Chewning were “controlled” by the local Democratic Party.

“This case does not pass the smell test,” Boling said in his pardon letter. “Jones biggest problem is that the Democratic Party controlled prosecutor, the Judge he stood before and Jones’ own attorney.”

“Then you bring in (then Attorney General) Andy Beshear to make sure that the locals are keeping control, while legally having been removed from the case,” Boling said.

“Dayton Jones needs your help to right a wrong,” Boling continued in the letter. “He was excessively punished for being the grandson of Tony and Jackie Jones.

“He needs your help to fix the corruption that exists between the local (D)emocratic (P)arty and Attorney General Andy Beshear’s office.”

Boling backpedaled Thursday on his assumption that the case was politically motivated. In his public statement, he said:

“I believe that we have a great court system of local lawyers, prosecutors and judges. I do not believe that our courts are politically motivated. This letter will have a dramatic affect on my relationship with those I work hand-in-hand with. I have worked for and with Judge John Atkins and have never known him to let politics affect his handling of a case. I have the utmost respect for him and our courts.

Boling told the New Era his reputation as commonwealth’s attorney will be “tenuous” for a period of time.

“I can still do my job and I can still focus on my job,” he said. “Yes, it’s somewhat of a distraction to others, but not to me because I’m focused on this job and doing my job. It may affect other people more than it will me going forward.”

Boling ended his letter to the former governor saying Jones made a mistake and is “guilty of being associated with an assault on a young man.”

Boling reiterated Thursday that he didn’t think Jones should have had to plead to sodomy or register as a sex offender.

“We have a lot of people on the sex offender registry who don’t fit the profile of a sex offender,” he said.

Boling said he has never spoken to the victim nor his general counsel; however, his letter said the victim “had done various types of conduct to his friends that were intoxicated.”

There was no evidence that the victim had ever done anything inappropriate, according to Chewning.

“And for a prosecutor to slander a victim’s good name is completely inappropriate,” Chewning said.

Boling said he wrote the letter thinking it would never get to Bevin before he left office and gave it to the Jones’ unsure of what they would do with it.

“After I wrote the letter, I assumed it would be denied, as majority of all pardon and (commutation) applications are,” Boling wrote Thursday. “I felt it was especially unlikely to be approved as the letter was written on Saturday, Dec. 7, 2019, and Governor Bevin left office on Monday, Dec. 9, 2019.”

Whether or not Bevin actually read the letter is still unclear.

In hindsight, Boling said he would not have written the letter on his official letterhead.

“They contacted me and asked if I could help them get something in writing to help the governor understand their thoughts,” he said. “The huge mistake I made was putting it on letterhead. What I should've just done was help type it up for them and let them — the more I stop and think about it, it doesn't make sense why I did it.

Chewning said the letter was “the most egregious act of any commonwealth’s attorney or anyone in a similar position I have ever seen.”